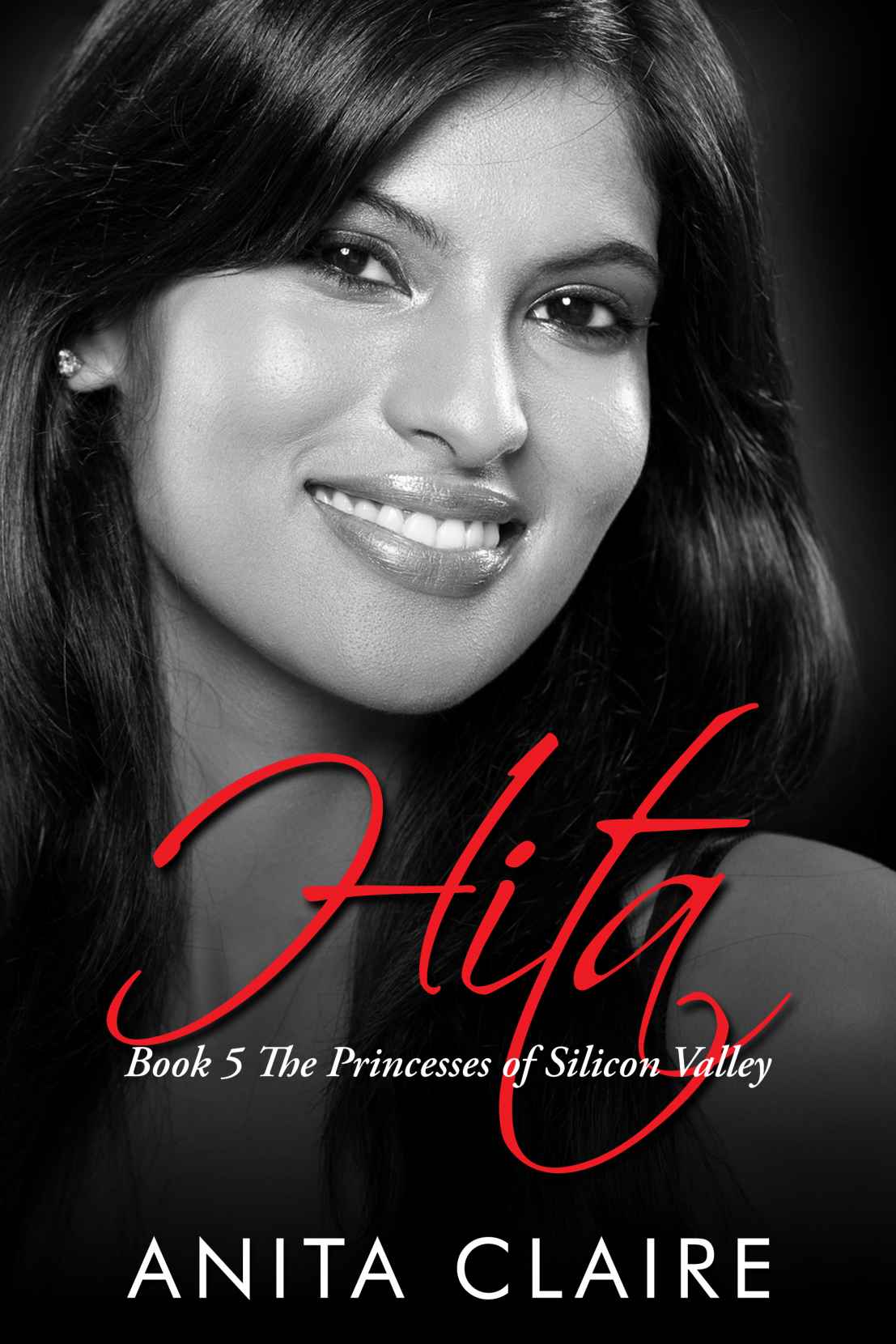 The Princess of Silicon Valley

This is a work of fiction. Names, characters, events, and incidents are either the products of the author’s imagination or used in a fictitious manner. Any resemblance to actual persons, living or dead, or actual events is purely coincidental.

Chapter 6 – Trip with Mom and Dad

Chapter 24 – Isabelle’s back in town

Chapter 36 – The Reign of Terri

Chapter 39 – Breaking Up is Hard To Do

Chapter 41 – Isabelle’s On Board

Appendix – A - Books in “The Princess of Silicon Valley” series

Chapter 1 – Swimming in the Morning

My phone rings three times, then an annoying woman with a New York accent says, “Ya motha is calling, pick up da phone.”

It’s a lot funnier when it’s not seven thirty on Sunday morning. Taking a deep breath, I answer with the cheeriest voice I can muster.

“Hita, your father and I are looking forward to your graduation. I’ve spoken to a couple of friends. Since we’re traveling through California, they’ve invited us to tea.”

“Hita, if you spend all day in bed, you won’t do well on your finals.”

“Yeah, Mom, thanks for the advice,” I say, trying to mask my sarcasm.

On some levels I’m close with my mom. But when it comes to men and marriage, we’re light years apart. My parents grew up in India and had an arranged marriage. Mom doesn’t understand why I’m not cool with this for myself. Since I’m almost finished with grad school, Mom thinks it’s time for me to get married. Right now she’s in overdrive with matchmaking, trying to fix me up with Indians from the right sort of family.

This makes me feel conflicted by my ethnicity. I love my heritage, all the stories, the food, the colors, and celebrations; yet I have a big issue with the traditional roles my culture inflicts. I have no desire to be married off to some guy who expects me to do all the work around the house, and then kowtow to his mother. Actually, when I’m ready to settle down I wouldn’t mind marrying an Indian-America, since he would get my family and we’d share a cultural heritage.

At twenty-three, the last thing on my mind is getting married and raising a family. I’m looking forward to getting a job, buying a car, and then having the time and money to do fun things, though I wouldn’t mind finding a fun boyfriend who’d knock my socks off.

I met my last boyfriend at a gaming convention. Brandon’s from Palo Alto, where I go to school. He was going to college up in Washington. Since we lived eight hundred miles apart, during the school year we’d meet up in our favorite games. It was a great way to date, and much more fun than having lame conversations over Skype or Face Time. Each time we’d meet up online, he’d pick me up in a different type of car, van, truck, motorcycle, or tank. We’d then fight bad guys together as we’d attempt to progress through a date. We spent time together in the real world when he came home for the summer and I worked at Google. But after spending almost four years dating long distance, I’ve decided that my next boyfriend will be local. I want more in my life than virtual hand holding and summertime sex.

As I head into the kitchen to make some coffee, I run into my roommate, Juliette. Our friendship was cemented our freshman year when seven of us went to the Halloween parties as princesses. I was Pocahontas—get it? I’m Indian. Juliette was Snow White since she has dark hair, brown eyes, and pale skin. Juliette spent her junior year in Spain, so I’m finishing grad school a year ahead of her.

“What’s with your mom this morning?” she asks.

I give her a sideways look and roll my eyes. “What else is with my mom?” Imitating Mom’s sing-song accent, I say, “Hita you need to find a husband. You’re twenty-three years old. Men don’t want to marry old women.”

“Really, at twenty-three your mom thinks your time’s almost expired?”

“Believe it or not she’s now trolling—who knows where—for the right kind of single Indian guys in Silicon Valley.”

“Well there are plenty here to choose from, though I can’t see you with some off the boat, traditional Indian guy.”

“Yeah, I’m cool with going out with Indians, and being Hindu. I can’t see myself with a Christian. But I’m making my own choices, and when the time is right, I’m definitely marrying another American.”

“I can’t believe we’re even talking about marriage. It seems like something that’s so far away.”

“I think it’s because we’re still in school.”

Juliette knits her brow. “I don’t know any guys who are even thinking about marriage. Most of the guys I know are too commitment phobic to want a full-time girlfriend.”

“All the guys I know think saying ‘hi’ to a girl after a hook-up is bordering  commitment.”

“I guess having a boyfriend makes me an outlier.”

“Yeah, what’s with you and Stephan?”

She stares blankly, finally she blinks. “I never really thought about it. I’m too busy trying to make it through school.” She starts eating Cheerios out of the box, then adds, “Stephan is fun to be around, he’s got this quirky dry sense of humor that really cracks me up. Even more than that, I like having a boyfriend; I like being in a relationship.” Then, in a conspiratorial way, she leans over and says, “and the sex….” Giving me a second to let my mind wander, she leans back and eats another Cheerio before continuing. “It sure beats some nasty hookup. But more than that? I don’t know.”

“Don’t even talk to me about the sex,” I groan out as I reach in the box and pull out a handful. “I wish I had a fun boyfriend, someone who lives close by and likes doing the same things as me.”

“And the sex?” Juliette says with a bit of a smirk.

“Yeah, and the sex.” I close my eyes and fantasize for a moment. “Yeah…and sex,” I groan out.

“You have no idea,” I respond. “But I have no interest in nasty hookups. What I’d like is to come home to something other than homework.”

“Hey, what about me?” she says with a big sassy smile.

“Yeah, you’re a great roommate and I love you, but, girlfriend, I don’t swing that way. Anyway, I don’t think Stephan would want me messing with his game,” I say with a wink.

“That wasn’t an offer,” she says to clarify. “I told Stephan that if he wanted that kind of shit, he’s dating the wrong girl.”

“He asked you for a ménage à trois?” I say in shock.

“Not exactly, but we were watching Game of Thrones and his eyes lit up when they showed girl-on-girl. He actually replayed the scene three times.”

“I told him if he wanted the kinky stuff, he should date Kelly.” Juliette starts laughing as she spits out, “You should have seen his face. He was horrified. Kelly scares the shit out of him. He actually asked me if she’s a guy in drag.”

“Yeah, I think he was talking about how she acts. Anyway, why don’t you date the guys your mom is busy dredging up? I’m sure one of them has to be cool.”

“Any guy who lets his mom find a date for him has to be either too traditional or totally pathetic. Indians don’t have a dating culture. Indian moms spend a lot of time interviewing families to find prospective partners from their caste for their kids. The guy’s family invites the girl’s family to tea. If you’re both interested in meeting again, it’s three dates and you’re engaged.”

“NO. If you see the guy three times, the moms are looking for auspicious dates for the wedding.”

“I can see why that would be a problem.”

As I labor away on my homework assignment to create a kernel patch, Skype goes off. I’m relieved, my brain was going nuts trying to get this sequence right. My childhood friend, Savi’s, picture comes up. We’re both from Chicago. Our families are real close. We went to the same high school, attended the same Hindi class, and took Indian dance together.

“Hita, how goes it?” she casually says with a smile.

Making a deep sigh I drone out, “I’m trying to get this assignment done. I have so much to do before I graduate.”

She nods with understanding then says, “Have you figured out what you’re doing after graduation?”

She tips her head in that way that shows me this news makes her a little sad. “You’re not coming home?”

“To Chicago?” I say in disbelief. “Weren’t you thinking of coming out here?”

She frowns then shakes her head before saying, “No, I think I’ll live with my parents this summer. I’m still on the fence. I need to decide if I want to work before starting my PhD.”

“Won’t living at your parents be a little…stifling?”

She frowns. “Yeah, of course. But they have the pool in the backyard and my grandparents aren’t staying there this summer…so it won’t be as bad.”

“But what about guys?”

She barks out a laugh. “If I had a boyfriend it would be terrible. You know how my parents are.”

I nod in agreement since our families are so similar. “But your mom? Is she starting to talk about…teas?”

“There’s no way in hell I’m going to have an arranged marriage. My mom might be persistent, but I’m even more stubborn. Anyway, I don’t date Indian guys.” She raises her eyebrows as she asks, “What about you?”

“I’m not dating anyone either,” I say with regret.

“No, I mean your mom. Is she pushing for an Indian guy?”

“My mom’s always pushing something. But I live two thousand miles away. It’s hard to be a matchmaker from a distance,” I say with relief.

“But your parents are coming out for your graduation?” Savi pushes.

“I bet your mom is working overtime to set up some ‘teas’ with the right sort of families.”

I nod, then groan at the thought. “Having tea at someone’s house sounds so innocuous.”

“Yeah, it would be if our mom’s weren’t busy using them to parade us in front of single, eligible, Indian men and their mom’s.”

“I might not be doing well finding a guy on my own, but my mother choosing a guy for me, now that would be a complete disaster.”

Savi nods her head in agreement. “I’m American, I’ll choose my own man, and live my own life. I know my mom would hate to hear this, but I’m never going to date an Indian. It’s Americans all the way for me. Anyway, good luck on your interview,” she tells me before we both sign off.