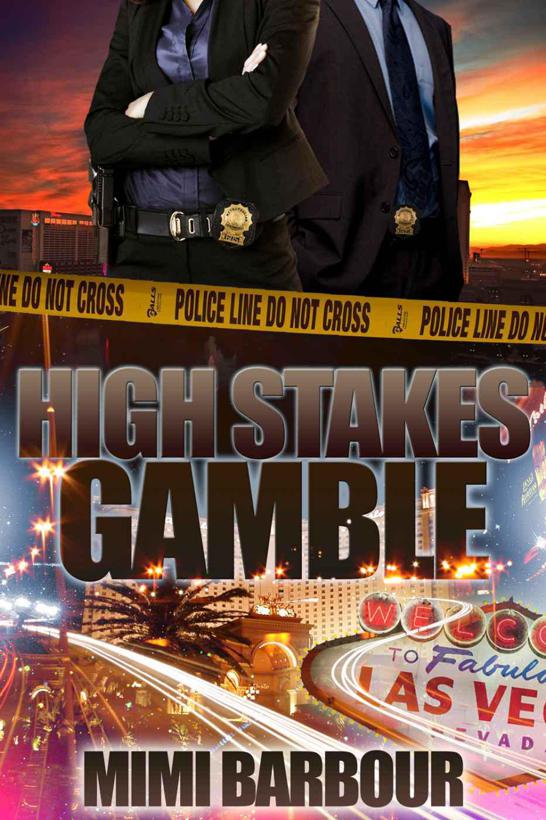 Aurora loves her mommy role and is fascinated by her little angel, Lily. When babies start to disappear in Vegas, not once did Aurora ever imagine that Lily would be one of the kidnap victims. So when the unthinkable happens, it forces Aurora to once again partner with Lily’s daddy, Kai, who’d previously walked out on her. This time, her heart will be kept firmly in lock-down where it’s safely resided since he disappeared and left her high and dry.

Almost a year later, still heartbroken over having lost Aurora, Kai learns he’s become a daddy. When a crazy lunatic kidnaps his baby girl, nothing can stop him from working the case, not even Aurora’s gun pointing at places on his body he’d like to keep intact. Hope arises when Aurora’s lips tell him to drop dead, but her hungry eyes plead for more of his tender brand of loving.

“Could not put any of the VEGAS series books down. Loved Mimi Barbour’s writing and character development. Highly recommend all the books in this series.”

“I love this series with tough, independent Aurora. Love her attitude and will be waiting excitedly for the next book in this series. And anything else from Mimi Barbour.”

Praise for Roll the Dice

“This fast paced romantic suspense is the perfect blend of action and romance.”

“Roll the Dice has the perfect balance of suspenseful action and hot romance. Highly recommended.”

“I’m delighted this is a series because these two characters along with a cast of memorable supporting characters is addicting.”

“I found I couldn’t put this down and stayed up till wee hours reading.”

I’d like to dedicate this book to my nephew Cory and his lovely family. Not only are they very special people, but they’re the inspiration for the character’s names used in the first four books of Vegas series.

Previously in Book #3 “Vegas Shuffle”, Aurora decides that hating Kai Lawson (who is missing, and presumed indifferent) will be much less painful than clinging to her fantasies of happy ever after. She stops her apologetic, beseeching phone calls, begging him to forgive her and return. Except for the final one she makes the night frustration, when putting their baby’s crib together, breaks her resolve. With a new partner on the scene and another interested male in the picture, she moves on. Now all she cares about is being a great mom and a good cop.

Because of his own stupidity and bullheadedness, Kai is stuck with an undercover operation in LA that is so critical, he can’t break character to even make a phone call. When he agrees to take on the role, he envisioned a few weeks, maybe a couple of months. Little did he know it would take almost a year!

Bursting with motherly pride, Aurora Morelli sat in the doctor’s waiting room cuddling her daughter Lily who slept like an angel while other babies fussed and created havoc. Moving the fuzzy pink blanket aside, she snuck a light kiss on the wrinkled forehead.

When her baby opened her big blue shockers, Aurora suffered the same jolt that happened every time she saw those beauties. Lily had her daddy’s eyes. In fact she looked a lot like Kai, bald and pensive—yet charming and sassy.

Since Kai had disappeared into L.A.’s vast perimeters almost a year ago, memories were all Aurora had of him. Memories she’d fought hard to keep away.

Now with Lily being a tiny replica, it had become difficult but not impossible. With determination, she’d learned to block out that which gave her pain. Considering Aurora’s hellish life growing up with a bitch for a mother, Aurora had a backbone that didn’t bend and a prickly personality very few were allowed to get close to.

Relaxing the stiffening in her arms that started Lily squirming, Aurora gazed around the room. The very pregnant, thirty-something woman sitting next to her had smiled when Aurora first entered. But after Aurora gave her the prickly keep-to-yourself look so normal to her these days, her neighbor obviously got the hint not to initiate any conversation.

Glancing around the tranquil doctor’s office, low music in the background, she made note that the two females behind the stone-fronted counter spent more time gabbing than filing, or whatever they did to supposedly earn their wages. If their ample shapes gave the straight goods on their physical activities, both spent far too much time chatting… while sitting.

Her gaze strayed from seat to seat, and as customary, she checked out the other patients. Playing her personal game of who and what, she made up lives for each—who they were and what line of work they did.

Amazingly, she hit the jackpot more times than the law of averages. Guess she had an instinct about people that she honed. Her job as one of Las Vegas’s detectives rendered her more perceptive that the normal person. And she did love her job.

Or she did before her boss and good friend, Lieutenant Cory Ashton, forced her to take a drawn-out maternity leave. True, she hadn’t been at her best in the last months before Lily’s birth. But she justified her rotten mood from being forced to take a desk job.

Hell, that would make any good cop crazy. No way would she admit to missing Lily’s daddy so badly that facing each day as her stomach grew more balloon-like ended up worse than the day before.

Then Lily arrived and her world righted itself. Being with her child was as close to heaven as she was likely to ever get. But man she yearned to be back keeping the streets free from the criminal element.

If someone would have told her she’d miss her chatterbox partner, Lisa Jordan, as much as she did, she’d have laughed and called them crazy. So the fact that she called her every morning surprised the hell outta her.

No way could she stay away for much longer; it didn’t matter what Cory Ashton had to say.

A startling sound from an elevator opening its doors at the far end of the luxurious space caught Aurora’s attention. So did the dark-haired, jean-clad female who stumbled out screaming.

“Help me, please! My baby! He’s taken my baby! In the elevator…” Collapsing in a pathetic heap, the mother’s beseeching arms reached out in panic. The poor dishevelled woman screamed, her shrill fear infecting every person there. “Help me!!”

Aurora turned quickly to her frightened neighbor, menacing her with a glare before she handed Lily over. “I’m a cop. Hold my baby and don’t move.” Her intimidating finger pointed so close to the woman’s nose that she brushed it lightly. And when Aurora did intimidation, no-one messed with her.

The cowering mother-to-be pushed her long red hair toward her back, nodded, and gingerly accepted the sleepy baby.

Aurora bounded over to where a growing, cackling group surrounded the poor victim now prone and sobbing out of control.

“Move aside, please. I’m Detective Morelli with LVMPD, settle down and take your seats.”

Being on maternity leave, she didn’t carry her badge, so instead she flashed her wallet with her identification showing.

She turned to the younger receptionist who had been first to assist the crazed sufferer. “Call this number and request Detective John Hampton. Tell him to get his ass over here. Tell him Aurora Morelli has asked for him specifically.”

Aurora gave her one of her cards with the department’s number listed and steadied her own hand when she noticed the card shaking.

Passing the victim to Aurora, the office girl jumped up to do her bidding.

Hysterics and tears had to be dealt with. Aurora, who knew how she’d feel if someone tried to take Lily, gathered the poor woman close for a few seconds and awkwardly patted her back.

Over the top of the head nestled into her shoulder she turned to the room at large. Her voice meant business. “No one leaves until I say so.” She got the attention of the other assistant, then pointing behind her, she continued. “That elevator is now a crime scene—shut it down. Then go and wait for the police at the front door and bring them up here via the stairs.”

Hesitating with the phone in her hand, the office girl squeaked. “I’ll just call the doctor? And t-tell him what’s happened. He’ll be able to give her something to settle her down.” She nodded at the whimpering female in Aurora’s arms.

The distraught mother, sensing authority, grabbed Aurora’s arm, frantically pinching. “Please, I want my Billy. I tried to stop him. Help me,” she moaned. Her obvious agony awoke every tingling sensation in Aurora’s scalp. She glanced over to the where Lily lay safe in the arms of her white-faced impromptu babysitter.

“I’ll help you, Ma’am, but you have to stop crying. Take a deep breath.” Her mesmerizingly soft voice seemed to work a miracle and the other quieted, her desperate eyes searching Aurora’s face and expression.

“He got on the elevator behind me and forced me up against the wall. When he drugged me, I-I tried to stop him. But he put a cloth over my nose and mouth. I must have passed out. Billy, my baby was gone when I came to.” At this point the victim had to stop and use the tissues Aurora had passed to her from the box nearby. Once she’d wiped away the snot and tears, she continued. “It could only have been a few minutes.”

Vulnerable and seeking exoneration, she begged for confirmation that she wasn’t to blame. After all, isn’t it a mom’s job to keep her child safe?

“Mary Fulton. And my baby’s name is Billy. He’s two months old. And he likes to be rocked to sleep…” The last came out in a whisper that sent a mass of quivers rioting down Aurora’s back.

“Shuu! Calm now. It’s okay Mrs. Fulton. We’ll find your baby but you have to be strong. We need you to tell us anything you can about what just happened. Come now. Get up and we’ll take you to a quiet area so we can talk.”

Aurora motioned with her head to the doctor who had quietly appeared and began surreptitiously assessing the patient while Aurora asked the questions.

Understanding her request, the doctor helped the woman to stand and then supported her toward the closest small room where an examination table sat next to a couple of chairs and a small desk.

He spoke quietly to Aurora as they walked, Mary Fulton staggering between them. “I can give her something to calm her. If I don’t, she soon won’t be of much use. Right now she’s hanging on by a thread. I think she’s attached herself to you but even you won’t be able to influence her for much longer.”

“Go ahead and give her something then. If we’re going to get the information crucial to finding her baby, we’ll need her as calm as possible. There’ll be an Amber Alert. But you must understand how critical it is for the first twenty-four hours that we follow up every conceivable lead.”

“Can’t stay away, Morelli? Always where the action is, and you on maternity leave, Lassie. By golly, even a doctor’s office.” John Hampton’s greying bushy eyebrows covered twinkling eyes that made her feel a whole lot better. All six-plus feet of the Irish devil soothed her uneasiness. There was none better to work with than this solid, good-hearted man.