Read Hers to Command Online 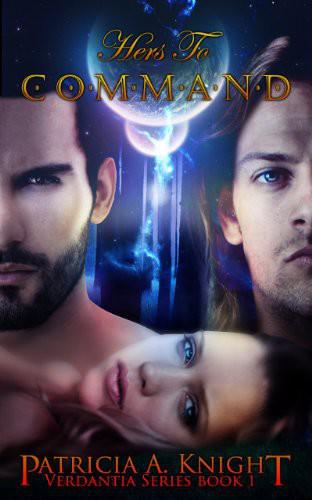 No part of this book may be reproduced or transmitted, with the exception of a reviewer who may quote passages in a review, without written prior permission from the publisher.

This is a work of fiction. All characters,
names, events, incidents and places are of the author’s imagination and not to be confused with fact. Any resemblance to living persons or events is merely coincidence.

WARNING: The author and publisher would solemnly advise you not to attempt any of the sexual or non-sexual actions
of any of the characters in this book. Any damage physical, mental or emotional is the sole responsibility of the person/persons attempting such actions. Please be aware that this is a work of fiction and you are responsible for yourself and the consequences caused thereof.

Patricia has worked very hard for over a year on this particular piece of entertainment. This book was brought to you by hard labor and love. Please respect an artist’s work for the enrichment we try to bring you.

I humbly ask that you don’t outright steal this child born on paper and brought to you by love. If you come by this book by nefarious means, and you are simply unable to give the change in your pocket for the purchase price, then take it with my blessing. But if you can purchase it and would like Patricia to continue to bring you great books, please purchase a copy to support her.

Some time ago, you encouraged a
fledgling writer you didn’t know.

Writing is the product of rich interior life. Imagination fires the mind and fingers capture those elusive wisps of thought and
transfer them to paper. But what feeds the fires of imagination? Well, it helps to start by being bat-sh*t crazy. But, in my case, it is an amazing group of authors and critique partners: my sweet “Em” and Travis, lovely Aliya and Stephanie and Kayla. And finally, to my long-suffering lover of many years who lets me sit at the keyboard typing while his dinner burns on the stove. Gotta love a man like that.

Thank you to Skylar Faith at TruenotDreams for the stunning covers and to Troll River Publications for, well, everything. You are beyond awesome.

Isolated, far from the interstellar trade lanes, hundreds of light years from any civilized planet, Verdantia marooned them on her surface—then she spoke to them.

After decades searching the vast Hyperion Galaxy for a home, after the fierce elation of finding the perfect jewel of a planet, the Nuovo Terrans found themselves stranded on Verdantia. To their consternation, Verdantia interacted with them. The ability to connect with the planet’s sentience during sexual intercourse gifted a genetically select few with the ability to manipulate enormous energy. To the space-weary colonists settling her surface, the shocking discovery had been their salvation. The energies radiating from Verdantia’s vast underground
diaman pipes
disrupted technology, rendering it so unreliable as to be useless. The superstitious called it
magick
. The well-educated recognized a unique combination of electro-magnetism and harmonics guided by a primitive sentience. The green Eden of Verdantia was alive.

For centuries,
descendants of the original, space-faring colonists studied to harness the enormous forces produced. Through arduous sexual sacraments known as the
Greater
and
Lesser Rites
, aristocratic
magisters
and
magistras
bearing specific genetic combinations enhanced many facets of every-day life from encouraging the growth of crops to heating homes.

Of foremost
importance to the resource-rich, isolated planet, an impenetrable shield protecting the planet from off-world invasion was powered by the residents’ sexual energy. The protective wall flowed from soaring towers housing
diamantorre
, highly charged, crystalline constructs. These strategic stone towers dotted the planet in a grid, energized by the
Great Rite
.

Unknown to those in power,  certain irresponsible
magisters,
careless after five centuries of peace failed to perform the mentally and physically perilous
Great Rite
. This neglect drained the
diamantorre
to hazardously low levels and the protective beams in some areas of the planet flickered weakly making the nearby residents vulnerable.

In the High Enclave, the stone walled complex where
docenti
taught the high-level
magicks
, elite geneticists, the
L’anziano,
arranged the marriages between highborn houses, mandating advantageous matings of
magickal
bloodlines. The centuries of strict breeding by the
L’anziano
produced the thirty-two noble houses sitting in Verdantia’s House of Lords.

With the revelation of
the potent aphrodisiac,
cinnagin
, the isolated planet's galactic status transformed from quaintly primitive to prized. A mere gram of
cinnagin,
the extract of a tree unique to the forests of Verdantia, would purchase an inter-stellar yacht on the pleasure planets of Telleria and Vxloncia. Verdantians considered
cinnagin
, used to violently escalate arousal in the ritual of the
Great Rite
, a sacred substance, never to be abused so profanely.

In a well-organized use of vicious, overwhelming force, the Haarb and their mercenary forces invaded Verdantia through gaps in the
planet’s energy shield. For a rapacious race of scavengers, slavers and drug runners, Verdantia and her priceless
cinnagin
was an irresistible prize. Brutal torture revealed the secrets powering the
diamantorre
and the butchery of the aristocratic
magisters
and
magistras
began.

Vastly outnumbered, w
ith a token military and insufficient
magickal
practitioners to protect the planet, the hapless Verdantians fell to the Haarb. The energy wall once protecting the entire planet shrank to that emitted by the sigil tower of Verdantia's besieged capital, Sylvan Mintoth. The Haarb sought to wipe the Verdantians from the face of their planet. With the fall of Sylvan Mintoth, the Verdantian’s annihilation would be complete.

Verdantia had one slim hope.
The
L’anziano
had long sought to join three
magickally
-gifted aristocrats. The
L’anziano
theorized that if brought together, the aristocrats’ genetic combination would create another
Tetriarch, the Rule of the Three.
The power the three would command could save their world. But that salvation was only a theory and the individuals involved were unaware of their potential.

Wind gusted against the camouflaged campaign tent. The creak of stretched canvas and squeak of straining rope made an ever-present accompaniment to the soughing of the evergreens outside. Verdantian Supreme Commander, High Lord Ari DeTano, adjusted the lantern light to better illuminate the huge topographical map covering one taut canvas wall. Ari raked impatient fingers through his dark hair as he studied the large red squares indicating the location of entrenched enemy squadrons relative to his elite Verdantian cavalry and League of Federated Planets’ ground marines.

“
Doral, we will mobilize to attack on their eastern flank, here at Gryphon’s Dell and here at Haversome Ferry, as soon as we receive confirmation that the 3
rd
Regiment Light Horse is in place.”

He
bridged a thumb and index finger to his temples and rubbed slowly. “On that other matter, don’t create an inter-planetary incident, please. Thanks to the LFP, we fight with hope for the first time in three years. We must have proof there is a traitor among them. We cannot alienate them.”

Doral
glanced up. “Without doubt, the League of Federated Planets’ support has changed the outcome of this war.” Doral’s quiet words competed with the outside sounds of the active military camp. “Regardless, the LFP harbors someone who works against us. I
will
find proof and eliminate him.”

Ari eyed
him and gave an inward scoff at his own continued inability to remain unmoved at the presence of his attaché. Tall and lean, blond and blue-eyed, the reserved young nobleman oozed sensual allure and elegant, predatory grace. Doral fit in with the rest of Ari’s staff like a panther among tabby cats. Assigned to him for over a year, Doral's deceptively angelic, masculine beauty concealed a lethal assassin and master spy. Ari trusted and respected his taciturn, intensely loyal, junior officer as he had no other in his life.
I want him. I cannot have him.

After years of brutal hand-to-hand fighting, the Verdantians were winning the battle
of attrition to regain possession of their planet. In the past year, the strong support of the LFP’s forces had reversed the fortunes of war.

As a battleground, Verdantia thwarted an army
outfitted with high-tech equipment. Nothing worked. The energies from the vast underground
diaman
pipes
neutralized technological devices. The crystalline deposits emitted a bewildering combination of electro-magnetic and harmonic energies and rendered any form of technology or electronic communications devastatingly unreliable. Verdantia possessed only one planet-side spaceport located in an area devoid of the
diaman pipes
.

The planet herself stripped warfare to its most elemental.
It pitted the strength of man against man. Cavalry and foot soldiers fought armed with sabers and crossbows, battleaxes and pikes. Barbaric, brutal, hand-to-hand fighting determined the outcome of each battle. It was archaic savagery.

With a growl of frustrated anger, Ari crossed his arms over his chest.
“We have re-taken the Silveterra and Guardo sigil towers. If they were operational again we could cut off the Haarb’s main supply route. Damn them to the seven hells for their butchery. Without a female partner, I can’t work the
magicks
required to restore the
diamantorre
.”

Doral
reacted with uncustomary heat. “After the wholesale slaughter of our women, I hope hell reserves a
special
place for the Haarb.”

Ari
pushed back his grief, an exercise he had perfected through constant repetition. He mourned for his slain brothers and sisters, for the enormity of Verdantia’s loss. Generations of men and women carrying the most elite
magickal
bloodlines lay heaped in unmarked, mass graves. Grimly, he eyed the map where constellations of black stars indicated whole towns and estates emptied of their populations, either killed or enslaved.

The
sentry’s loud cry drew Ari’s second-in-command to the door of the tent. Doral pushed the heavy canvas flap aside and stepped out before looking back over his shoulder. “A
L’anziano
courier-rider, Yannis Melcom.”