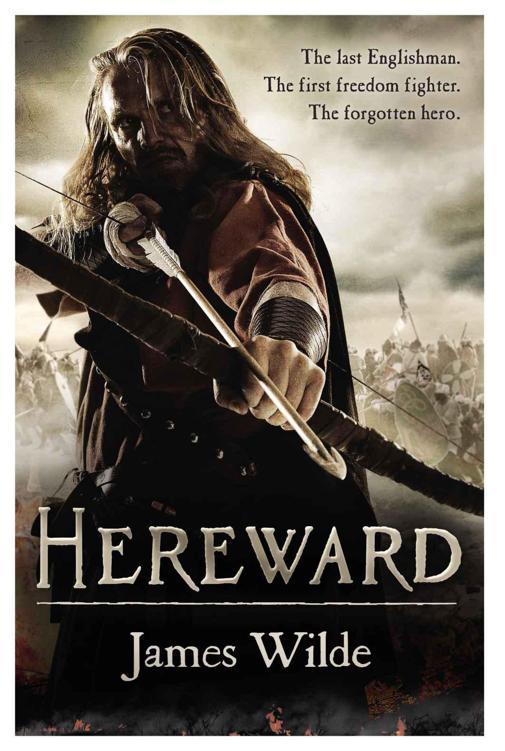 1062, a time many fear is the End of Days. With the English King Edward heirless and ailing, across the grey seas in Normandy the brutal William the Bastard waits for the moment when he can drown England in a tide of blood.

The ravens of war are gathering. But as the king’s closest advisors scheme and squabble amongst themselves, hopes of resisting the naked ambition of the Norman duke come to rest with just one man: Hereward…

To some a ruthless warrior and master tactician, to others a devil in human form, Hereward is as adept in the art of slaughter as the foes that gather to claim England’s throne. But in his country’s hour of greatest need, his enemies at Court have made him outlaw. To stay alive – and a freeman – he must carve a bloody swathe from the frozen hills of Northumbria to Flanders’ fields and the fenlands of East Anglia.

The tale of a man whose deeds will become the stuff of legend, this is also the story of two mismatched allies: Hereward the man of war, and Alric, a man of peace, a monk. One will risk everything to save the land he loves, the other to save his friend’s soul…

James Wilde’s thrilling, action-packed debut rescues a great English hero from the darkest of times and brings him to brutal and bloody life.

IT WAS THE beginning of the End-Times.

Black snow stung the face of the young man. Skidding knee-deep down the white-blanketed slope, he squinted in the face of the blizzard as he struggled to discern a path through the wild countryside of high hills and dense forest. On his tongue, the bitter taste confirmed his fears: ashes, caught up in the swirling white flakes. He was too late. Beneath the howl of the gale, he could hear the roar of the fires ahead and he glimpsed the billowing dark cloud just above the ridge, while at his back came the bestial call and response of the hunting party, drawing closer as he tired. From hell into hell.

With numb fingers, Alric pulled his coarse woollen cloak tightly over his black cowled habit, but his teeth still rattled, as much from fear as from cold. He was barely into his eighteenth year, his face as yet unlined by life’s strife. Hazel-coloured hair hung wet and lank against his thin face, his tonsure already growing out, and black rings lay under his hollow eyes. At that moment, the security and peace of the monastery at Jarrow seemed to belong in the memory of another, more innocent person, one uncorrupted by searing despair. He thought of his mother and father who had sent him to the monastery as a child for a life in service to God. What would they think if they knew how badly he had let them down?

Shrieking like lost souls, the ravens rose in one jet-black cloud from the spindly trees as he staggered up the next slope. His breath burned in his chest and his joints ached, but he drove himself on, grabbing on to branches to drag himself through the drifts. As the blizzard eased, he saw there was no way to hide his path. Across the desolate white landscape, his footprints trailed behind him for three miles, leading the raiders directly to him.

At the top of the ridge, he made the mistake of glancing back. Silhouetted against the lowering grey sky on the hilltop a half-mile behind him was Death, the battleaxe Grim gripped in his right hand, a spear in his left. Harald Redteeth paused only briefly, the wind whipping his cloak, before plunging down the hillside into the trees. Like a pack of wolves, his men swept over the hilltop behind him, silent now, sensing their prey was close.

Frantically, Alric crested the ridge, only to fall to his knees in the snow in shock when he saw the devastation heaped upon the village he had made his home.

A black pall covered the clearing in the forest as scarlet and gold flames blazed from every timber-and-thatch dwelling in Gedley. Only the crackle of the fire and the hungry cawing of the birds could be heard; no pleas for help, no cries from mothers searching for children, or defiant men raging against their suffering. Nor was there any sign of the ones Harald Redteeth had sent on ahead.

My fault
, Alric thought, before angry self-loathing overwhelmed his guilt.
All my fault!

Throwing himself down the incline, he picked up speed, his weary legs pumping out of control until he stumbled and fell, crashing against the boundary post next to the stream.

Hair, clothes and eyelashes white, he hauled himself to his feet and ran into the trees, calling the names of every inhabitant of Gedley one after the other. There was no response.

He might as well have set fire to the houses himself, plunged a spear into the chest of every man, woman and child. Could God forgive him? Could he ever forgive himself? Lost in the choking smoke, he wondered if he should stop running, let Harald Redteeth kill him too. He deserved his fate.

The monk cried out in shock as the floating figure of a man loomed out of the acrid fog, arms outstretched like the Lord upon the cross, eyes wide and staring. A moment later, Alric realized the man was dead, and one stumbling step forward revealed that the body was suspended in the thorny branches of a hawthorn tree. Wild hair and beard, both stained a deep blue, formed a fierce halo above a rusted hauberk that bore the marks of many strikes. Pink scars from battles past crisscrossed the arms and face. Alric’s gaze skittered to a vision of butchery and he reeled backwards, sickened: the carcass had been ripped from sternum to groin and the throat slashed, as if one killing had not been enough. Blood spattered the snow at the foot of the tree.

The slaughtered man was not one of the Gedley villagers, the monk saw. For six months, Alric had broken bread with every one of them while ministering to their needs, and this was a fighting man, not a farmer. He could only guess it was one of Harald Redteeth’s raiders.

But who had taken his life? The men of Gedley were not warriors.

Baffled, he fought to order his thoughts, and stumbled on through the smoke. Fifty paces further on, he cried out again. A severed head had been rammed on to the top of a boundary post, the neck cut clean across. A raven gripped the thick brown hair and pecked at one of the white eyes. Alric felt his throat tighten in mounting panic. Could this be another of the Viking’s men? Northumbria was a lawless place, but never had he witnessed such brutality. Dizzy, he recalled the villagers’ hearthside tales of the wicked
wuduwasa
that roamed the haunted woods gnawing on raw bones, and the shadow-spirits that waited among the trees for the unwary traveller. The monk crossed himself to ward off any watching evil.

But then the roar of the inferno wrenched him back to Gedley, and he blinked back hot tears of shame. Let the Viking and his men come; his own life no longer mattered if he could save just one survivor. But even though he shielded his face, the inferno seared his throat and drove him back. Falling to his knees in frustration, he began to sob.

When the racking had subsided, he raised his eyes to heaven and began to mutter a prayer for forgiveness. He caught a flash of movement on the periphery of his vision, but the smoke swallowed up whatever was there almost as quickly as it had appeared. His heart pattered. Another fleeting movement followed, and then another.

The instinct for self-preservation finally overcame him. Scrambling to his feet, he staggered away from the fire towards, he hoped, the path that led deep into the shadowy safety of the forest.

A cry rang out, followed by a response further away.