Read Her Own Best Enemy (The Remnants, Book 1) Online

Her Own Best Enemy (The Remnants, Book 1) 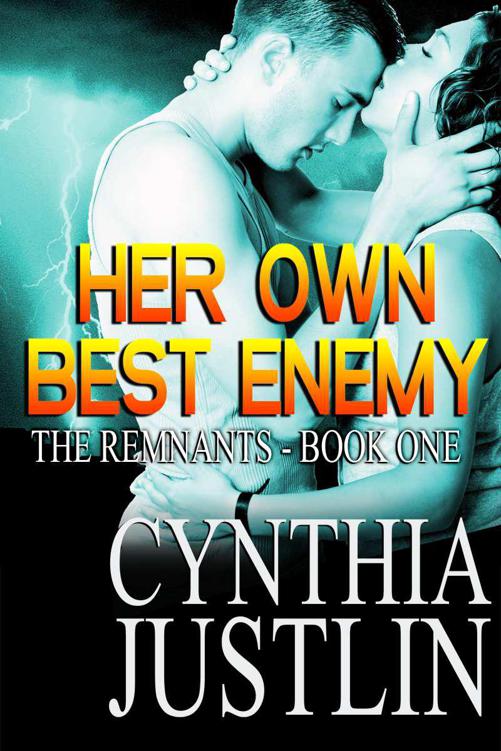 HER OWN BEST ENEMY

Her Own Best Enemy by Cynthia Justlin

ALL RIGHTS RESERVED. This book may not be reproduced or retransmitted in any form in whole or in part without written permission from the author with the exception of brief quotations for book reviews or critical articles. Thank you for respecting the hard work of this author.

This is a work of fiction. Names, characters, places and incidents are either the product of the author's imagination or are used fictitiously, any resemblance to locales, events, or actual persons living or dead is purely coincidental.

For my husband, Lewis, who has supported my writing from day one. I love you. And for Rey--thanks for letting me “borrow” the name Keith King.

Keith King looked about as approachable as a coiled timber rattler ready to strike—and that was with his back to her.

Grace Stevens stood in the doorway of the Monthan Rehabilitation Center, trying her best to wipe the remnants of the pouring rain out of her eyes, and stared at his rigid shoulders. He looked like a man who wouldn’t give an inch—and she needed him to give a mile.

She clutched her son’s picture in her hands, pressed it to her heart. Miraculously, it was the only dry spot on her soaked t-shirt, as if the universe knew how much she needed to keep her little boy near, even if the connection was only through a photograph.

Panicked tears gathered in her eyes. If she took one look at his sweet little face, she’d crumble. Her legs shook as she took her first step toward Keith’s table. He’d chosen the farthest one from the door, of course. She continued the long walk, whispers of her past ringing in her ears.

She shouldn’t have remembered the exact youthful drawl in Keith’s voice, or the jagged sting of his childish taunts, but even fourteen years couldn’t separate her from destruction he’d caused in her life.

He’d used her. Used her to carry out something so despicable that even now she couldn’t stomach the sight of him. But with her son’s life hanging in the balance, and nowhere else to turn, she couldn’t afford to be choosy.

Confronting Keith was going to be hard—Keith would make damn sure of that. Asking wouldn’t be good enough. Not for the Keith she remembered He’d make her beg, make her jump through hoops, and question her courage.

She steeled herself to take whatever he dished out. A clap of thunder shook the high windows. Hard rain pelted the glass mercilessly announcing the onslaught of another Arizona monsoon. The tormented weather matched the wave of unease that roiled through her stomach.

Straightening her spine, she marched between two rows of primary-colored plastic chairs and made the final beeline to Keith. Her steps faltered when she spied the don’t-mess-with-me tendons that stretched taut in his neck as he bent over the table.

The sharp edge of her son’s picture poking into her palm spurred her on. She couldn’t tell Keith who she really was. Not if she wanted his cooperation. He’d either scoff at her or blast her with his fury. And neither would succeed in getting her what she so desperately needed.

“Keith...King?” She grit her teeth at the crack in her voice and forced herself to continue around the scarred wooden table until they were face to face.

He looked up from the deck of cards he was shuffling. His intense hazel eyes narrowed on her face. Cold. Calculating. Derisive.

A scar marred his left cheek, a half moon that bisected the hard plane of his jaw. He hadn’t had it as a teenager, she definitely would’ve remembered. Even the faintest lines of his young face had been branded in her memory.

His straw-colored hair had darkened since his youth and was much, much shorter, in the typical military style. And the mouth that had once been the talk of teenage girls in two counties no longer appeared to have a hint of the sensuality it once possessed. In fact, the grim slash was void of any emotion at all.

Strangely enough, it only served to make his mouth sexier.

He surveyed her from head to toe, a long, slow perusal that started with her face, moved down to her pale yellow shirt, lingering on the damp fabric across her breasts, before trailing lower, over her equally wet jeans, down to the scuffs on her white sneakers. “Who’s asking?”

The rusty edge to his voice stirred a cocktail of nerves and anger through her, along with something more. Something she didn’t even want to acknowledge, something that fluttered low in her tummy and heated her cheeks. Damn him, he’d always had the ability to reduce her to a quivering mass of uncertainty.

Not this time. She wouldn’t let herself be trapped by his good looks and cocky attitude. This time she was taking control.

Though she’d deliberately used her ex-husband’s last name, her shoulders still twisted with tension. She watched his eyes for a flicker of recognition, waiting for them to darken with suspicion, or narrow in irritation, but they stared back at her with nothing more than cool assessment.

Of course he wouldn’t remember her. She’d been nothing more than a gangly, awkward, girl, sport for Keith and his friends, while he’d been the catalyst that crumbled her whole world.

He shifted his steady gaze to her outstretched hand then back to her face. “And?”

She slapped her purse on the table careful to lay Ryker’s photograph on the dry wood then plopped down hard into a puke green chair. He fanned a deck of cards across the coarse wood and proceeded to ignore her. The weight of his silence pressed in on her. Around the room other patients stopped what they were doing to stare.

“I—” she sucked in a deep breath and forced it past her dry throat, into her lungs. “I need your help. To find my son.”

He flipped a red queen of diamonds over and laid it atop the black king of spades, all without sparing her a glance. “I don’t see how that’s possible. I don’t even know you.”

“I know your sister.” Not exactly a lie. Victoria had been one year her junior, and even though she was now drunk more often than not, her knowledge of Keith’s whereabouts had been reliable. “She told me where I could find you.”

He snorted and turned over another card, still not bothering to look at her. “Figures.”

Something thick and molten ignited in her veins. With one great sweep of her arm, she sent his cards careening off the table. They hit the floor with a satisfying thwap that spurred her tears to start flowing once again.

The scrape of metal chair legs against the floor snapped her head up. Keith stood, a muscle leaping to life in his tight jaw. She’d gone too far. Rationality had taken a backseat to her goal, but God, her heart was disintegrating to dust without Ryker.

She leapt up and grabbed Keith’s hand before he could move away from the table. His hazel eyes shot daggers of contempt at her, but she sandwiched his warm fingers between her cold palms.

“Please.” Her throat ached. “It’s been two days. Two days without seeing my little boy’s crooked smile.” She released his hand and snatched up Ryker’s photo. His wavy, brown hair swirled about his head, his mischievous gray eyes twinkling up at her from behind wire-rimmed glasses.

She touched his cheek, her heart constricting over the photo’s two-dimensional limitations. Emotion lodged in her esophagus. She tipped the picture to Keith, who gave it barely a once over. “He’s eight.” She stuck the picture in his face. “Look at this face. Can’t you understand that I need help?”

Wariness crept into Keith’s hazel eyes, along with something that almost looked suspiciously like compassion, but before she knew what to make of it, it was gone. “So go to the police.”

“Don’t you think I tried that?” Her voice rose an octave, earning her more stares and a glare from a sour faced lady on staff who was rearranging the books in the room’s small bookcase housed below the wall mounted flat screen TV. Grace took a slow breath and spoke softly. “Since he was taken out of school by his father, they won’t do anything without evidence of a threat.”

“There you go. He probably took the kid camping.”

“My ex wouldn’t do that. He hated camping.”

No, the Mark she knew hated camping, but then again, as she’d recently discovered, she hadn’t really known him at all.

“How do you know he’s not after custody?”

“Mark has no reason to do that. We’ve always shared custody of Ryker.”

Keith rubbed at his furrowed brow for a moment then leaned forward, placing his palms on the table. “Look, lady, I’d love to help, but as you can see, I’m not exactly in any position to go anywhere. Hotel Monthan’s got a lock on me for the next couple months.”

“What?” Her throat tightened, pushing the word out in a squeak. “But your sister said—she told me your—your stay was voluntary.”

He let out a bark of laughter. “You think I’d willingly check myself into this place? You should know better than to trust anything Victoria says. She’s a drunk, and half-crazy to boot.”

Grace’s knees buckled, her elbow hit the edge of the table and jarred her back into the chair, but the sharp pain was nothing compared to the despair that knifed through her. “But….he said you were the key.”

Keith wasn’t the damn key to anything, and the sooner he made this woman realize that, the sooner he could go back to being what he was. The patsy. The Army’s scapegoat. If he’d learned anything during his three week stay here at Monthan it was that the Army wasn’t interested in looking for the real traitor behind the training exercise tragedy that had taken the lives of several of his friends. His superiors knew someone needed to pay, not only for their deaths, but also for the missile components stolen from Fort Bragg during the screw-up. He’d been the convenient choice.

He was suffering from PTSD, they’d said. Spiraling out of control. Drinking and raging at fellow officers. Damn them all to hell, he’d been grieving the loss of the only stable family he’d ever known, the brothers who had taken him into the fold without question and watched his back.

And as soon as he’d done his time here, he’d find out who was really responsible, and lock the son of a bitch traitor up for good.

He glanced down at the woman who’d barged in here looking for something he couldn’t provide. “I’m not the man you’re looking for.”

She brought her head up, tears tracking from her misty green eyes and down her cheeks, mouth trembling. “You’re exactly who I’m looking for. Mark left me a note. He told me to find you.” She didn’t look at all happy by the admission, a fact that confused him further. He didn’t know her, did he? He looked closer, but she’d bent her head to rifle through her purse, her hair falling in front of her eyes. She withdrew two more photos, which she spread out on the table next to her son’s. “Do you recognize him?”

Keith reached out a finger and snagged one of the photos closer. He narrowed his eyes on the familiar craggy face. “Your ex is The Bard?”

She frowned up at him, wiping tears off her face. “Who?”