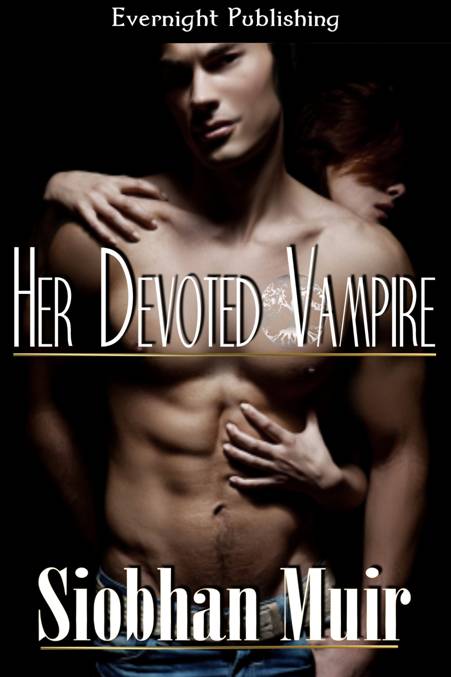 Dedicated to my husband George, who once said romance
was bunk, and then graciously let me prove him wrong with this story.

I have to thank the women from Embraced by Words,
Morgan Kearns, Kay Phoenix, CR Moss, and Natascha Jaffa for reading through the
old versions of this story.  Huge thanks go to Shannan Albright for
requiring me to send this to Evernight after she read the rough draft, and
thanks to Karyn White for smoothing out all the writing. You make me sound
great, Karyn. Thanks most of all go to my husband, George, who always cheers me
on and happily offers quirky ideas whenever I get stuck in my manuscripts. I
love you.

Her kidnapper turned her roughly in his arms and
pinned her to the wall behind her, his hands stapling hers above her head. Her
nipples grew taut against the hard planes of his chest as his deep brown eyes
bored into hers, his scarred face blazing with intensity.

“You’re mine,” he growled, and excitement shivered through her at
the menace in his voice. “Never forget!” She stared up at him and swooned.

Bridget Shanahan
damn near threw her book across the expanse of comfortable chairs and black
lacquered tables beyond her own, but she didn’t want to kill anyone.

As if I’d ever believe she’d sleep with a man who
kidnapped her!

The book
was a cheap romance she’d picked up at the corner store in an attempt to cheer
herself out of the funk she’d felt all week, but the book only served to
illustrate how bleak her life was as compared to the fantasy of the storyline.

What she
really needed was a dark handsome knight to save her from her life.

A blast
of damp air gusted through the doorway of Snickerdoodles, Bridget’s favorite
coffee shop on the Boston Common, sending a shiver of cold down her back. The
chill didn’t improve her mood, which was as gray as the early fall weather
outside. Tightening her
scarf around
her neck, she raised her gaze from the ridiculous book and spied her empty
coffee cup.

Doesn’t that just sum up my life right now?

Some
sixth sense dragged her focus from the cup to the room at large, and she noted
she wasn’t the only one to look up. All the women around the room had their
gazes locked on the entry, some even craning their heads to see around the
potted plants and support columns to get a clear view. Wistful sighs erupted,
providing an undercurrent to the soft conversations filled with words like
“sexy”, “hottie”, and “handsome”. Bridget snorted with derision and sized up
the recipient of their attention.

Hot
excitement hit her, and she trembled.

The man
in question wasn’t as tall as Bridget had expected from the reaction of the
other patrons, but he emanated such raw power it was impossible
not
to notice him. She judged him to be
about six feet tall with broad shoulders and long dark hair falling to the
small of his back. That was about all she could see of him because he wore a
fedora straight out of the 1930s Mafia Chicago and a black leather trench coat
that brushed his ankles. His face was obscured by the hat, but she could see pale
skin and a neatly trimmed dark mustache and goatee.

Bridget’s
heart pounded with anticipation, and excitement made her shift in her seat as
the mystery man waited patiently for his turn at the counter. When would he
turn and look at her?

What is
wrong
with me?

Bridget
shook off the odd spell as she watched the other people around the dark stranger.
The girl behind the counter served the person in front of him as perfunctorily
as possible in her hurry to get to him. As soon as the man in the hat stepped
up to order, she was solicitous and sweet, her smile coy. Bridget inwardly
rolled her eyes even as she strained to hear what he’d order, but despite the
silence in the room, his voice was muffled.

I wish I could hear what he says.

She was brought up short by that
thought. She wished what? Why in God’s name did
she
care who this guy was or what he sounded like?

Dammit, I’m just as bad as the other pathetic souls in
this place!

She
snorted in disgusted disbelief and jerked her attention back to her book. She
fiercely told herself to read and ignore the guy in the hat and coat. She
managed
not
to hear what he’d
ordered, or where he’d sat down, but in spite of her pointed ignorance, she
still heard the sigh of the counter girl as he walked away after his selection.

Bridget refused to raise her head
and scan the room for him. She could keep her eyes to herself. But when someone
called out “Fredrick”, she followed the herd and tracked the mysterious man as
he rose from his seat three tables away with the liquid grace of a predator. She
watched him with feminine appreciation, her heartbeat increasing even as her
mind scoffed. When he reached the counter to claim his coffee, the server gave
him a dopey smile and held the cup out to him like an offering. He smiled back
at her, taking the cup, then swept the whole room with his gaze as if searching
for something.

Of course he’s searching for something – where he left his stuff
.
Idiot.

Surprise
and an odd recognition skittered through her when his gaze met hers. He had a
narrow face with delicate bones giving him a beauty most men were too robust to
have. Eyes as dark as the night sky were framed by long black lashes, and black
brows were set close together over his straight nose. His expression held humor,
and his gaze swept over her with a seductive pull. She fell into those eyes,
warmth and yearning wrapping around her, promising comfort to drive away the
bleakness. His lips curved into an inviting smile, and he winked, sending her
heartbeat into overdrive.

Jeez, you’re desperate!
She broke the
eye contact.
Get back to your book, or go
home!

But
neither choice enticed her nearly as much

as the mystery man, and Bridget’s gaze kept
wandering to the table. He sat facing her with his head down, reading
something. Had he looked up, he would’ve caught her staring

The view of the top of his head
did nothing to dispel the attraction. The dark hair gathered at the base of his
neck in a ponytail fell smoothly over one shoulder like a silk rope. She wanted
to run her hands through it or at least brush it like little girls do at
slumber parties. She imagined it would feel absolutely delicious through her
fingers.

She
tossed the book on the table and abruptly stood, her jaw clenched tight as she
flung her coat over her shoulders. It was her favorite winter coat, creamy
white with enough pockets to hide receipts, ChapStick, keys, cell phone, wallet,
and the pocketknife that her brother James had given her. “Never go anywhere
without a pocketknife,” he’d told her, a problematic suggestion now that the
airlines were cracking down on security since 9/11.

She wrapped her scarf around her
neck savagely, zipped up her coat, and grabbed her own mug to put in one of the
dish bins scattered around the room. She refused to look at the man with the
glorious hair when she passed right by his table, an unnecessary detour that
pissed her off more. She caught the movement as he raised his head, but she
forced herself to leave the room quickly before she sat down without invitation.
What a pathetic freak she was!

The wet, cold wind banished the
coffee-scented heat surrounding her, and she dreaded the long walk home; but
she really didn’t have the money to waste on taxi fare. She shoved her hands in
her pockets, wishing she’d remembered gloves, and realized she’d left her book
on the table. Bridget closed her eyes and groaned. Was it worth going back for
it and facing everyone who’d seen her storm out?

Bridget stood there on the
sidewalk trying to decide what to do when she heard the door behind her open. She
sighed, shaking her head.

It’s just a dime store romance. I don’t really need it. Oh, just bite
your pride in the ass, and go back in there to get your book, you idiot
.

The Wells Bequest by Polly Shulman
Freak the Mighty by Rodman Philbrick
A Killer Retreat by Tracy Weber
Arielle Immortal Resolve (The Immortal Rapture Series Book 8) by Lilian Roberts
Black Alibi by Cornell Woolrich
Love and Louis XIV: The Women in the Life of the Sun King by Antonia Fraser
Winning It All (Hometown Players Book 4) by Victoria Denault
Silence Once Begun by Jesse Ball
covencraft 02.5 - carnival moon by margarita gakis
Off Course by Glen Robins