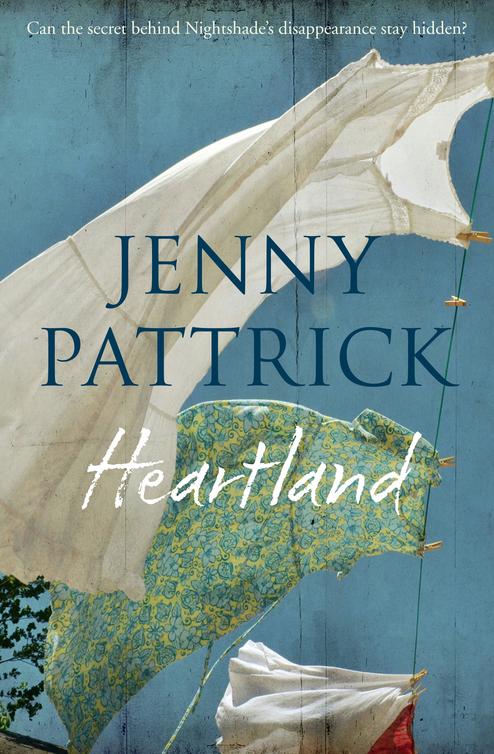 HEART-WARMING AND COMPULSIVE READING, THIS IS AN ENTERTAINING, LIVELY AND MOVING NOVEL FROM ONE OF NEW ZEALAND’S FAVOURITE AUTHORS.

‘Donny Mac was released at Eastertime, about a month before Pansy Holloway, also known as Nightshade, disappeared for good.’

After a short stint in prison on trumped-up charges, the loveable simpleton Donny Mac returns to the house left to him by his grandfather in the small settlement of Manawa, in the shadow of Mt Ruapehu. Now inhabited by a handful of colourful locals, the once prosperous milling town is only bustling in the ski season when the out-of-towners arrive.

Awaiting Donny’s return is the drunken and pregnant Nightshade, who claims he is the father. Donny’s friends keep watch anxiously. Among them is the Virgin Tracey, a sixteen-year-old hiding out in one of the abandoned houses, with her own tiny baby. When an accident threatens to put Donny back into prison, he and the Virgin Tracey come up with a solution to cover it up. But can the secret remain hidden? 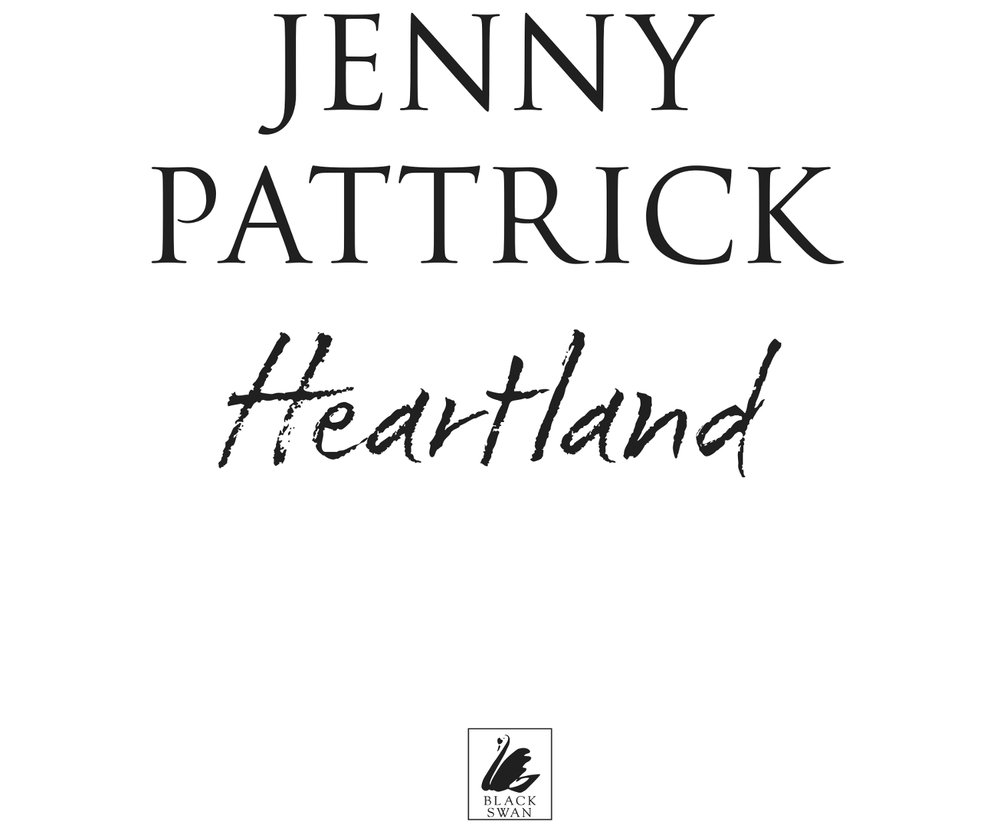 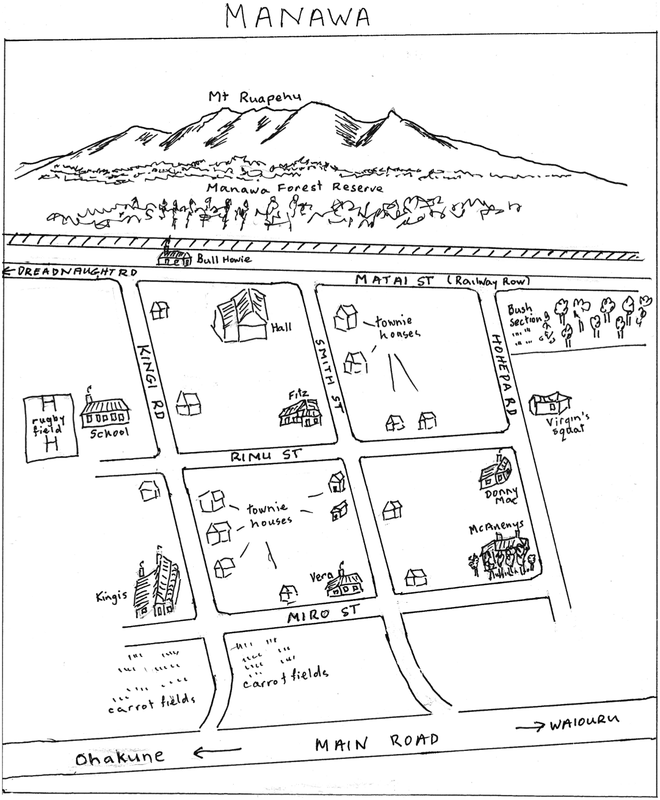 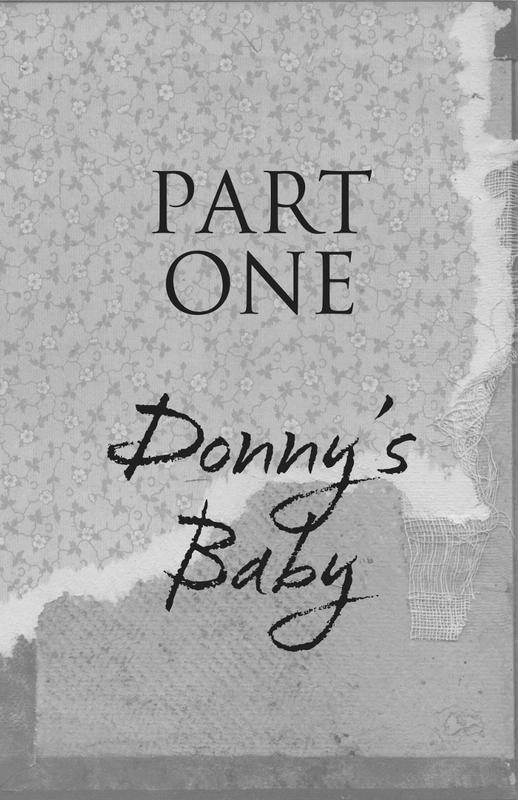 Donny Mac was released at Eastertime, about a month before Pansy Holloway, also known as Nightshade, disappeared for good. A high, windy day it was, first snow on the mountain but the air still warm. He roared out of Whanganui, his old motorbike farting and popping, drove up the Paraparas, through Raetihi and Ohakune without glancing left or right, turned at the Junction and rattled on to Dreadnaught Road, one beefy arm waving in time to a tune in his head. Maybe he was singing â grinning for sure â as he gunned the bike down the dip, across the one-way bridge and up the rise, hoping for a lift-off.

âWhoo hoo!' he shouted. âCome on baby!' But the Honda had been laid up too long, or run out of petrol more likely. No lift-off today. In fact the machine coughed and died. Donny heaved his big backside off the saddle, rocked the tank to encourage the last drops into the feed, and ran the bike forward.
In the end, after a few stop-starts, he was reduced to pushing it the last few metres into Manawa.

Out to his left, the tall beech and kahikatea of Manawa Forest towered over the row of houses; above them, out of sight at this angle, the mountain presided, its three peaks rocky and dark at this time of year, the light dusting of snow making little impression except for the glaciers, and even they were grubby, ash from last year's eruption showing through.

Donny paid the familiar landscape no attention. At Bull's place, number 5 Matai Street, he stopped, pulled the bike on to its stand, stepped up to the gate and waited. He knew better than to barge in or sound his fancy musical horn. Bull Howie was not keen on noisy surprises. Donny hopped from foot to foot, chuckling to himself at the thought of Bull's pleasure; then, seeing Bull in the back garden, he risked a shout. Donny knew his voice was loud. Bull had told him often enough, so he tried not to overdo it.

âI'm back!' Donny shouted, forgetting. âI'm back, Mr Howie!' His grin would light up a dark night.

Bull stabbed his fork into the soil, wiped his hands on his gardening trousers and walked to the gate.

âWelcome back, Donny Mac,' he said, his proffered hand formal, his expression perhaps a little stern, though behind the usual nervous frown you could detect the warmth of a smile. âWe've missed you.'

âHave you kept fit then, inside?'

Donny's grin reappeared. He flexed both biceps, posing
front-on and sideways, then pointed to his stomach. âGo on, punch me! It's tight as a drum.'

Bull declined to reach over the fence for the punch.

âAll right, Donny, I can see you're fit. Now. Have you been to see Mr Kingi? Have you thanked him?' Again the anxious look.

âI think so. When he came down to visit me. I thanked him then. I think I did.'

âThat's good, Donny. But you need to thank him again. He took your bike down on his truck to be ready for you when you came out. And he paid for that anger class.'

Bull nodded his approval. âGood lad. And four: stay away from Di Masefield. She's one to carry grudges to her
deathbed
.'

Bull had known Donny Mac for ten years, tried to help him through his troubles. They all had. But seeing the boy's happy open face, Bull couldn't find the right words to tell him the news. Someone should warn him, settle him down, ask a few questions, maybe, before the lad set foot on his own property.

âYou go and see Mona Kingi before you go home, Donny. Or Vera. There's been a few changes since you were away.'

Donny watched Bull for a moment. He knew he was a bit slow â had been taunted for it all his life â but he could read the concern in his friend's eyes. âBad changes?'

Bull cleared his throat. âMaybe not. The ladies know about it. You talk to them.' He reached out now, over the fence, and patted Donny's shoulder. âYou ready for the rugby season? Come on down tomorrow and I'll put you through your paces.'

âGo and talk to the ladies now, Donny.'

Turned out it was one of Mona Kingi's bad days, so Donny wheeled into Miro Street and parked his bike outside Vera's ramshackle heap of a house. No waiting outside the gate this time. Donny waved aloft a bouquet of greens gathered from the ditch and strutted around to the back where Vera stood in the middle of the garden, muttering at the carrots.

Vera straightened, glared at the boy. âWell, you took your time, you big bugger, my chooks could've died of the famine for all you cared.'

Donny laughed, a joyful explosion that set the chooks clucking and flapping. He chucked the greens into the run, then turned back to give Vera a bear hug.

âAll right, all right,' muttered Vera, glancing over his shoulder to see if the townies next door were looking.
âI suppose that means you want a scone and a cuppa.'

âYou bet! And Mr Howie says you have to tell me
something
.'

Vera set down her bucket of compost. She might have known Bull couldn't face it.

While the scones are rising, Vera tells Donny about the old ladies. The easier part of the news. âYou've got neighbours now, Donny, did George tell you when he came down?'

Donny sits at the table, his dark eyes roaming the crowded familiar kitchen â its cluttered sink, the rusty electric stove, the big old couch where Vera sleeps. He bounces on his chair like a child, smelling the lovely crusty steam from the oven, the dark blackberry jam on the table.

âFor heaven's sake, Donny, are you listening to me?'

âThere's three of them, arrived a few months ago. Old as the hills they are, and their car the same. Beautiful black Austin came out of the ark. They're in the old postmaster's house that's been empty for years. So your back section touches theirs.'

âWell, we don't know, Donny. Private's the word I'd use.' Vera scratches her bristly chin, cleans mud from a fingernail with a fork. âI took them some carrots and a few eggs to be
neighbourlyâ' she grins â âand to case the joint. We were all curious. Flash newcomers in Manawa don't come two a penny. But I couldn't get a peep from them. Thanks, yes, but information â not a scrap.'

Vera goes to the stove, knocks the scones onto a plate. âThe one who opened the door looked to be the youngest. Dressed in some silky coloured dress down to the ground. She had a smile and a word of thanks. Inside I could see the other two sitting in the gloom of the kitchen. Big old table, a rocking chair. Old-style stuff, but good. One of them, dressed head to toe in black, looked like she'd croak any moment â she must be a hundred. Well! That old crone rapped her cane on the floor, said something to the young one who said thank you again and shut the door in my face. What do you think of that!'

Donny, busy buttering and jamming his scone, rolls his eyes. âMaybe you didn't look smart enough? Maybe you were wearing your old oilskin and gumboots?'

Vera glares. âOf course I was. Could've been raining. Bloody rude. Anyway, Donny, keep your eyes out. They might be well-off; might pay you to do a few jobs around the place.'

Vera pours tea, takes a bite of scone to give her strength. âNow, Donny Mac. Do you know a girl called Pansy?'

Vera slaps the wood of the table and Donny jumps. âPay attention, you silly bugger, this is important. Hair dyed bright red, black jeans with silver studs, big shoulders like a man?'

Donny looks everywhere except at Vera. âShe sort of hangs out at the pub. I met her couple of times watching footy.'

Vera's cracked old hands reach out across the table to grasp at Donny's. âListen, Donny, she's up at your place now. Been there a few weeks. She's having a baby and she swears it's yours.'

That brings on a silence. Donny stares at Vera and she stares back, thoughts racing between them. A blush spreads up Donny's neck. He whistles. âWhoo hoo.' It comes out as a whisper.

âSo,' says Vera at last, âis it yours, do you think? This is important, Donny. 'Cause if she's lying, you should just send her packing. It's your place.'

Vera watches as every kind of emotion plays across Donny's face. Panic is there, and embarrassment, but in the end it's a gentle wonder that wins out.

âIt could be mine,' says Donny, his voice small and puzzled.

Vera has been hoping for a denial. Donny himself is enough of a commitment for the locals of Manawa without this.

âYou've been with her then, Donny?'

The big fellow clears his throat. âWell, yeah. She went with all of us. Lots of times. But how would she know it's mine? How could she tell that sort of thing?'

How indeed, thinks Vera, who has little time for the slut but has to admit that Donny might have scant idea of being careful. Especially if some of those louts at the pub were goading him on.

She sighs. âYou better go on down and talk to her. She's been quiet enough these last weeks. Be gentle, eh? No shouting, Donny. You don't want any more trouble.'

âYeah.' Donny holds up his three fingers. âI learned all that down inside.'

âGood man. And keep away from the Easter Hunt.'

âWe'll wait and see about that. Those bloody Masefield boys will be watching out for you. Let it all settle down.'

Vera bundles the rest of the scones and a few eggs in a piece of newspaper. âOff you go. You're a grown man now, Donny, and you've got to deal with this girl yourself. You never know, it might be a good thing, a baby. You could be a good father.'

âYeah.' Donny is only half won over.

He seems reluctant to go now. Vera gives him a little shove. Poor bugger, all this on his first day back. âLook,' she says, âif that girl gets toey, come on over here or to Kingis' and we'll sort something out.'

Vera's guess is that the girl needs a place and Donny's is her last resort.