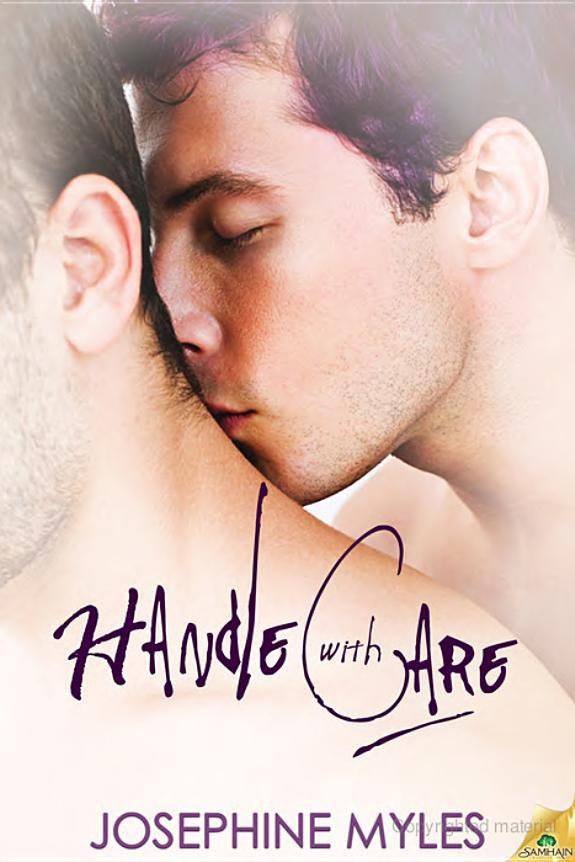 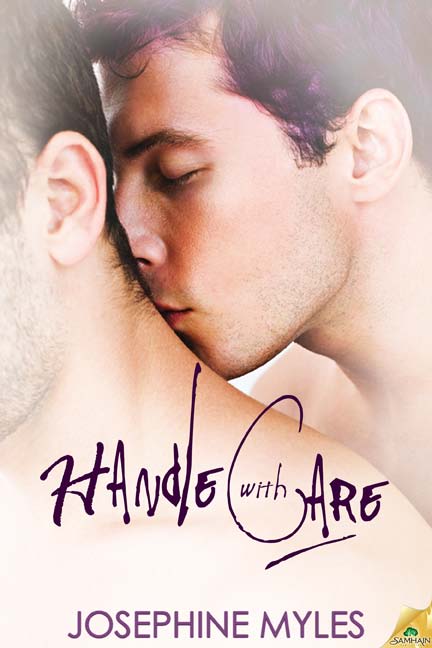 The best things in life aren’t free…they’re freely given.

Ben Lethbridge doesn’t have many vices left. After raising his little sister to adulthood, he wasted no time making up for the youth he lost to responsible parenting. Two years of partying it up—and ignoring his diabetes—has left him tethered to a home dialysis regimen.

He can do his job from his flat, fortunately, but most of his favourite things are forbidden. Except for DVD porn…and fantasizing over Ollie, the gorgeous, purple-haired skateboarder who delivers it.

Their banter is the highlight of Ben’s lonely day, but his illness-ravaged body is the cruel reality that prevents him from believing they’ll do anything more than flirt. Not to mention the age gap. Still, Ben figures there’s no harm in sprucing himself up a bit.

Then one day, a package accidentally splits open, revealing Ben’s dirty little secret…and an unexpected connection that leaves him wondering if he’s been reading Ollie wrong all this time. There’s only one way to find out: risk showing Ollie every last scar. And hope “far from perfect” is good enough for a chance at love.

For Graham, my long suffering “houseboy”.

Also, thanks to Lou, for reading through the first draft and giving me plenty of encouragement along the way; to Jamie for her spot-on critique; to Krista for going through all the medical details and reassuring me I had them right; and to my team of wonderful beta readers: Don, Blaine, Susan, JRose, Kaje, and Jennifer.

“Oi! You’re meant to be cleaning, not snooping.”

Zoe stuck her head around the door and smirked at me. “Just thought the contents of your cupboard could do with a dusting.” She held up a box:
Gay
Gladiator: He will bring them cock, and they will love him for it
. “This one looks interesting. Mind if I borrow it?”

“It doesn’t actually have Russell Crowe in it, if that’s what you’re hoping.

And there’s not much of a plot that I can recall.”

“Does it need a plot with all those hot men in it?”

God, what was I going to do for kicks if I lost interest in the films? A man needs some kind of vice, and since the kidney failure, I’d been banned from practically everything else that was bad for me. I really, really didn’t want to have to start gambling. Knowing my luck, I’d end up bankrupt and homeless, and seeing as how my home and income were about the only things I had left going for me, the thought of losing them brought me out in a cold sweat.

The doorbell chimed, and I jumped. I glanced out the window and spotted my favourite yellow van outside. The driver was out of sight, hidden down the side of the house where the front door opened onto the driveway.

“No! I’ve got it.” I pushed past her and practically ran down the hallway.

That familiar, purple-crested, green shape waited behind the frosted glass.

“Hey there,” I said as I opened the door, vainly trying to suppress my panting. Damn, I was so unfit. I tried to get in some daily exercise with my Wii and my rowing machine, but I tired so quickly these days. “Great to see you.” Oh God, I sounded so fucking desperate. I tried to rein it back in. “You have something for me?” I was trying to remember if I was due a DVD today.

Ollie had tufty purple hair, big brown eyes, and one of those weird piercings that went through the top part of his ear twice. That combination of punk and cute always gets me, and he was cuter than a Manga-style kitten.

“Hey, Ben,” he said, beaming at me like I was an old friend rather than just the weird recluse on his delivery round with the three-DVD-a-day habit. His smile revealed that gap between his front teeth, and I couldn’t help staring at it.

What should have been a flaw only made him more bloody adorable. “How’s things?”

“Yeah, not so bad.” I sounded croaky and had to cough to clear my throat.

God, I must have looked like I was on death’s door. Mind you, I suppose I was. It was only the dialysis keeping me going.

He was still smiling, but there was a trace of concern in his eyes. I tried not to look into them—can’t stand being pitied—so I ran a furtive gaze down his body instead. That was probably a mistake, but you can’t blame a guy for looking. I might not have been in a fit state to go out on the pull anymore, but I still had twenty-twenty vision and a vivid imagination. It was currently working overtime trying to strip Ollie’s uniform off him. Somehow, he always managed to make the forest-green polyester look sexy.

Ollie was slight, and I dwarfed him by at least six inches, but he gave that impression of barely restrained energy like smaller guys often do. The shirt fit him well, hugging his lean body. I could see part of a tattoo peeking out from under a sleeve but was distracted from trying to decipher it by the ropey muscle and dark hair of his forearms. His trousers were baggy and frayed at the heel, with one of those long key chains hanging down over one thigh, and his black boots had chunky soles. The skate-punk stylings made him look like he was barely old enough to buy cigarettes, and I was starting to feel like a dirty old man for lusting after him.

“Looks like another DVD today. You watch more films than anyone I know.”

He held the scanner out to me while I struggled with the fiddly little stylus and attempted to create something like my usual signature on the slippery screen. It was even harder to focus because I could see him straining to peer around me and was suddenly paranoid that I’d left something embarrassing on view in the hallway. I had to fight the urge to look around and check.

little variety into my solitary sex life. It would probably be more of a novelty than the contents of the parcel Ollie had tucked under his arm, after all. Best not to think about that, though. Not right now with the smell of his spicy-sweet aftershave tickling my nose and his hands only inches from mine.

“You know, you’ve got a great place here. Is it all yours?” Ollie wasn’t bothering to hide the fact that he was openly checking out my hallway.

“Yeah, but just the ground floor. Bought it before the property market went mental.” I’d been lucky, because even a year later, there was no way I’d have been able to afford it on my beginner’s salary. Money had been tight for the first few years, but it’d been worth it to be able to bring Zoe up in a pleasant neighbourhood of Victorian, red-brick semis in a quiet part of Reading. They were all large houses, and my flat had two good-sized bedrooms at the front, with the kitchen and living room opening onto a sunny courtyard at the back.

My bathroom was a windowless afterthought crammed in at the end of the hallway, but I’d kitted it out with as much loving attention as the rest of the rooms.

Thirteen years and a river of sweat and tears later, the place was looking pretty damn good inside and out. Every room was tastefully restored to retain the period features, but with modern furnishings in carefully coordinated, muted colours. Great. Now even my house was better looking than I was.

“Uh, yeah. Okay.” Shit, why did he have to suggest that when Zoe was sitting in the kitchen, no doubt listening to every word? I could have invited Ollie in for a coffee if it were just me.

Who was I fooling? There’s no way I’d have risked being shot down by him.

Much better to have at least the vaguest hope in my head than to know for sure he thought I was a creep.

I’d put nails through the card and hung my keys off them so it looked like he was carrying them. I might as well have put a sign up proclaiming “nerd in residence”.

“Good choice. He’s my all-time favourite X-Men character. I mean, Wolverine’s pretty cool and all, but Nightcrawler has style. I was gutted when they killed him off.” Ollie pouted a little at the thought.

I must have looked as confused as I felt, because he grinned again. “Sorry, you probably haven’t read the comics. I’ve got a bit of a collection, but I guess most people only know the films.”

I bristled at the implication that I was one of the ignorant masses but realised from Ollie’s guileless expression that he probably hadn’t meant it to sound like that. “I have a few of the graphic novels, but I didn’t know they’d killed him off.”

“Yeah, it’s in
Second Coming,
if you want to check it out. At least they gave him a decent death n’ all, but I was really pissed off about it. Still”—that quicksilver grin was back—“there’s all the alternate universe versions, and I’m sure there’ll be more. They just like to keep going with these things.”

“Right. Of course.” I wasn’t sure if I could keep up with this conversation, but I enjoyed watching the rapid play of emotions over Ollie’s face.

I realised I was staring when he gave me a quizzical look followed by a flash of something knowing in his eyes.

“Time to love you and leave you.”

If only.
I could have done with a little loving, even if he did leave straight after.

Ollie grinned again and thrust the parcel in my direction. “See you tomorrow, yeah? I expect I’ll have something for you.” He raised his eyebrows, and the smile got even broader. “I usually do.”

That had to be just common courtesy, right? That and a friendly feeling because we liked the same fictional character. The idea of there being anything more behind his words and warm smile was ridiculous and not the sort of thing someone in my condition should be thinking about. Besides, my gaydar had always been rubbish—the only place I’d ever plucked up the courage to approach guys was in gay bars, and even then I’d needed some chemical courage buzzing through my veins to act the part of predatory top.

A Traveller's Life by Eric Newby
The Billionaire Affair by Diana Hamilton
California Sunrise by Casey Dawes
Dick: A Bad Boy Stepbrother Romance by Wild, Nikki
Time and Chance by G L Rockey
I Never Thought I'd See You Again: A Novelists Inc. Anthology by Unknown
A Pawn for a Queen: An Ursula Blanchard Mystery at Queen Elizabeth I's (Ursula Blanchard Mystery at Queen Elizabeth I's Court) by Buckley, Fiona
Beneath the Forsaken City by C. E. Laureano
Jabberwock Jack by Dennis Liggio
The Desirable Duchess by Beaton, M.C.