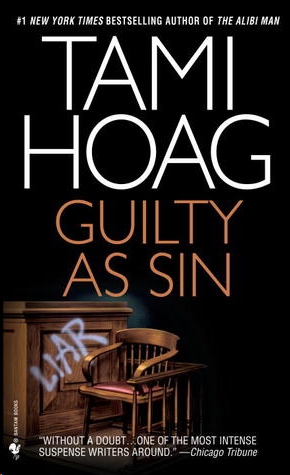 Justice has but one form, evil has many.

She flung herself up the stairs, stumbling as one heel caught an edge. She grabbed for the handrail, her fingers scraping the rough plaster of the wall, breaking a nail, skinning her knuckles.

The stairwell was barely lit, drawing in the ragged edges of illumination that fell from the lights in the halls above and below. Security lights. They offered nothing in the way of security. In the back of her mind she heard a low, smoky voice, "Tour boss needs to have a word with someone about security. This is a- highly volatile case. Anything might happen."

There were telephones in the offices she ran past. The offices were locked. Her self-appointed assassin was jogging behind her, laughing. The sound went through her like a spear, like the sure knowledge that he would kill her. Pursuit may not have been his plan, but it had become a part of the game.

The game. The insanity of it was as terrifying as the prospect of death. Beat the system. Wreck lives. End lives. Nothing personal. Just a game.

She ran past Judge Grabko's courtroom and ducked around the corner that led back toward the southeast stairwell. Scaffolding filled the stairwell, cutting off her escape route. The scaffolding for the renovators. Christ, she was going to die because of the stupid plaster frieze.

The northeast stairs looked a mile away. Midway stood the iron gates that blocked the skyway between the courthouse and the jail. She lunged for the fire alarm on the wall, grabbing the glass tube that would break and summon help.

The tube snapped. Nothing. No sound. No alarm.

"Oh, God, no!" She clawed at the useless panel. The goddamn renovations. New alarms going in. State of the art.

"Come along, Ellen. Be a good bitch and let me kill you."

She grabbed the handle of the door to the fire hose and yanked.

"You have to die, bitch. We have to win the game."

His hand closed on her arm.

Her fingers closed on the handle of the ax.

They think they've beaten us at our own game.

Every chess master knows in the quest for victory

he will concede minor defeats.

They may have won the round, but

the game is far from over.

They think they've beaten us.

We smile and say,

Welcome to the Next Level.

He said it was a game," she murmured, her voice whisper-soft, and tight with pain. She lay in a hospital bed, the deep purple bruises on her face a stark contrast to the bleached white of the sheets and the ash white of her skin. Her right eye was nearly swollen shut, the flesh the color of an overripe plum. Bruises circled her throat like a purple satin band where she had been choked. A fine line of stitches mended a split in her lip.

The pain triggered flashes of memory—sudden, violent, blaring. A memory of pain so sharp, so intense, it took on qualities of sound and taste, the smell of fear, the presence of evil.

"Clever girl. You think we're going to kill you? Perhaps."

Her throat being closed by hands she couldn't see. The instinct to survive surging. Fear of death riding the crest of the wave.

The air caught like a pair of fists in her lungs, then slowly seeped out between her teeth.

Assistant County Attorney Ellen North waited for the moment to pass. She sat on a high stool beside the bed, a legal pad and small cassette recorder on the bedside tray to her right. She had met Megan O'Malley only days before. Her impression of the field agent for the Minnesota Bureau of Criminal Apprehension had consisted of a handful of adjectives: tough, gutsy, capable, determined, a small woman with fierce green eyes and a big chip on her shoulder. The first woman to break the male ranks of BCA field agents. Her first day on the job in the
Deer
Lake
regional office had been day one of the
Kirkwood kidnapping. Twelve days ago.

Twelve days that had taken the previously innocent, quiet, rural college town into the depths of a nightmare.

In her efforts to crack the case, the chip had been effectively knocked off Megan's shoulder and smashed, and Megan along with it. She had come too close to unraveling the puzzle. Beneath the covers, her damaged right knee was elevated. Her right hand was encased in a cast. According to her doctor, the hand was badly smashed, and he despaired of the "poor darling little bones" recovering, even with the meticulous attention of a specialist.

Megan's transfer from
Deer
Lake
Community
Hospital
to the
Henne-pin
County
Medical
Center
in
Minneapolis was scheduled for Tuesday, weather permitting. She would have been transported the night of her ordeal, but
Minnesota
had been clutched in the grip of a January storm. Two days later
Deer
Lake
was just beginning to dig out from under ten inches of new snow.

"Did you at any time hear another person in the room?"

"No." She tried to swallow and her face tightened against a new wave of pain.

"We've calculated all the moves, all the options, all the possibilities. . . .We can't lose. Do you understand me? You can't defeat us. We're very good at this game. . . . brilliant and invincible."

Eight-year-old Josh Kirkwood had disappeared from outside the Gordie Knutson Memorial Ice Arena after hockey practice on an otherwise normal Wednesday night. No useful physical evidence left behind. The only witness a woman casually glancing out her window half a block away and seeing nothing to cause alarm: a little boy being picked up from hockey practice; no sign of fear or force. The only trace of him left behind had been his duffel bag with a note tucked inside.

a child has vanished

ignorance is not innocence but SIN

A game. And she had been used as a pawn. The idea brought Megan a rush of useless emotions—anger, outrage, a hated sense of vulnerability. The only satisfaction was in the fact that they had spoiled his little coup de grace and now Garrett Wright was sitting in a cell in the
Deer
Lake
city jail.

Garrett Wright. Professor of psychology at
Harris
College
. The man the media had pulled in as an "expert witness" to attempt to explain the twisted workings of the mind that had perpetrated this crime. The Kirkwoods' neighbor. A respected member of the community. A volunteer counselor of juvenile offenders. A man above reproach.

But though Wright had been apprehended, there was still no sign or word of Josh.

"I saw his feet. He has this habit of rocking back on his heels. I noticed it the first time I met him. He was doing it that night. I could see his boots when he stood close enough."

"That's not exactly a fingerprint."

Megan scowled at the assistant county attorney, her temper cutting through the haze of drugs and pain. Goddamn lawyers. Garrett Wright had drugged her, terrorized her, abused her, humiliated her. He may well have ended the career that was everything to her. A decade in law enforcement, a degree in criminology, a certificate from the FBI academy—she was a damn good cop, yet Ellen North could sit here, every blond hair in place, and calmly question her as if she were just another civilian as blind as Lady Justice herself.

"It was him, the son of a bitch. He knew where I was going. He knew I was that close to finding him out. He caught me, beat the shit out of me, wrapped me in a sheet of evidence proving he stole Josh—"

"We don't know yet what the bedsheet will prove," Ellen interjected. "We don't know whose blood is on it. The lab has a rush on it, but DNA tests take weeks. The blood could be Josh's or not. We have the blood samples from his parents. If the DNA analysis shows the blood on the sheet could be from a child of Paul Kjrjwood and Dr. Hannah Garrison, we've got something we can use. We might just as easily have a red herring. It would make more sense for the kidnapper to try to throw us offhis trail—"

"It makes his kind of sense," Megan argued. "He believes he can get iway with anything, but he underestimated us. We got him dead to fuck-ng rights. Whose side are you on?"

"You know what side I'm on, Megan. I want to see Wright punished as much as you—"

"You can't even come close."

She couldn't argue the point. The bitter hate that laced Megan's tone was indisputable. The emotion Wright had forged and hammered within her with every blow was something deeper than Ellen could even imagine. It was a victim's private rage compounded by the humiliation of a proud cop. Ellen knew that her own personal, moral hunger for justice was a pale appetite in comparison.

"I want him convicted," she clarified. "But the case against him has to be airtight. I don't want his attorney to see even a hairline crack. The stronger our case, the better our chances of squeezing the truth out of him. It could mean getting Josh back."

Or finding out the whereabouts of his body.

She left that line unspoken. Everyone involved in the case knew the chances of finding Josh Kirkwood alive. Wright and his accomplice, whoever that accomplice might be, could not afford to let go the one person who could identify them absolutely as the kidnappers.

"If we can present Wright and his attorney with a strong enough case. If we can threaten them with a murder charge and make them believe we can make it stick even though we have no body, then Wright might give us Josh. We can force his hand if we're careful and clever enough."

"We thought you were a clever girl, but you're just another stupid bitch!" A disembodied voice. Never rising above a whisper, but taut and humming with fury.

She trembled. Blind. Powerless. Vulnerable. Waiting. Then the pain struck from one direction, then another, then another.

A cry of pain, of weakness, of fear started in the heart of her, and Megan struggled to choke it off in her throat.

"Are you all right?" Ellen asked with quiet concern. "Should I call for a nurse?"

"Maybe we should quit for now. I could come back in half an hour—"

Ellen said nothing, giving her a chance to change her mind, though she didn't expect that to happen. Megan O'Malley hadn't got where she was in the bureau by backing off. The BCA was the top law-enforcemen agency in the upper
Midwest. One of the best in the country. And Megan was one of the best of the best. A good cop with the tenacity and fire of a pit bull.

Ellen was counting on that fire. She had a meeting with the county attorney in an hour. She needed Megan's statement and time to fit it into the game plan she was formulating in her head.

Lines of Fire (The Guild House - Defenders Hall) by Walters, Janet Lane
Yefon: The Red Necklace by Sahndra Dufe
Escape (Chronicles of Hart) by Kat Murray
Schooled In Lies by Henry, Angela
The Sunny Side by A.A. Milne
The Bookstore Clerk by Mykola Dementiuk
Situation Tragedy by Simon Brett
Soulshine by J W Rocque
Beneath the Aurora by Richard Woodman
Father Mine: Zsadist and Bella's Story by J. R. Ward