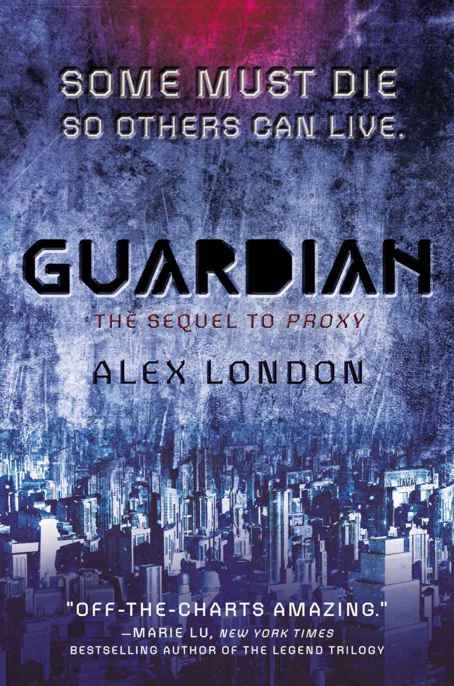 For Tim, who makes the future bright

Summary: “The only way to stop people from getting sick is to get the network back online. That means reversing the very revolution that Syd and Knox
began”—Provided by publisher. [1. Science fiction. 2. Epidemics—Fiction.
3. Social classes—Fiction. 4. Gays—Fiction.] I. Title.
PZ7.L84188Gu 2014 [Fic]—dc23

We must love one another or die.

AT NIGHT, THEY DISPOSED
of the bodies. There was no ceremony, no ritual, no remembrance.

“They
were
human,” said others. “Now they’re meat.”

“We have to study the infection,” said the doctor.

“We have to contain it,” said the counselor and gave her orders. “Burn the bodies.”

A work detail was tasked with the burning. One by one, in the dead of night, green uniforms with white masks hauled corpses to the pile. The corpses were webbed with black veins, their entire network of blood vessels visible through the pale skin. Dried blood obscured their faces and each had a single hole in the temple by the eyes, where the killing bolt went in. They were put down like livestock, burned like sacrifices.

As the bodies crackled, the doctor watched the flames, her face half in shadow, half dancing in firelight. “I believe there is a cure for this,” she said.

The counselor, standing beside her, nodded, but did not turn to look her way. “Your cure is worse than the disease.”

“It’s the truth. Your way is treason.”

“You’re in denial,” the doctor said. “This is going to get worse if we don’t stop it.”

“It’s a new world, Doctor,” the counselor replied. “We can’t turn back the clock.”

“Even to save people’s lives?”

The doctor watched the young members of the work detail tossing the bodies on the pyre. They moved with the assurance of youth, the kind of attitude that allowed them to stare infection and death in the face and believe it would never touch them. “I don’t know.”

“I can hardly understand it. The blood turns against the body. Itching, burning. Then, expulsion. Half of them bleed out.”

“And the other half?”

The doctor clenched her jaw. “They haven’t bled out yet.”

“They can’t communicate, but we have to restrain them to keep them from scratching their skin off with their fingernails.” The doctor sighed. “So, yes, they are in pain.”

“Put them out of their misery,” the counselor ordered.

“But we can still learn—”

“Those are the orders.” The counselor walked away, two green uniforms trailing her into the jungle. The doctor took off her white smock, pulled the blue gloves from her hands with a loud synthetic snap, and stood before the flames. She watched her latest failed experiments turn to smoke and ash in the bonfire, every bit of blood boiled away, with all the information it might have contained.

She had ideas, dangerous to share; but if she didn’t find a way, she feared, this sickness would go further than any of them could imagine. She would record a message in case she failed. She hoped that someone would still be alive to receive it.

LIAM WAS ALWAYS THERE,
just out of the light, standing in doorways, hovering at the edge of conversations, watching Syd even as he slept.

These were the orders of the Reconciliation: Syd was not to be alone.

Liam tried to give Syd his space, but every inch of air between them amplified the danger. He couldn’t do his job if Syd was too far away when an assassin struck. And he certainly couldn’t protect Syd if he couldn’t find him.

That was why Liam cursed as he sprinted through the overgrown streets of the jungle city, slashing vines from his face, tearing through thorns, and leaping the gnarly mangrove roots webbed between rusted skyscrapers.

Morning mist shrouded everything, and if Liam hadn’t lived in this jungle city his entire life, he would easily have gotten lost. In overgrown plots, people on clearing details hacked away at the brush; others heaped it in piles for burning. Young Purifiers patrolled in pairs. Clad in their green uniforms, their faces were concealed beneath white balaclavas that let only their eyes and mouths show through. While on duty in service of the Reconciliation, all Purifiers were the same Purifier. The individual was negated by the mask.

Only Liam showed his face, his close-cropped red hair bright as torchlight. He wanted to be visible, known to all. A reputation for violence made violence unnecessary. Mostly unnecessary.

All the Purifiers kept their distance. Liam’s orders outweighed theirs: Syd was to be protected at all costs.

Liam reached an intersection and stopped. He rested his hands on the fallen pole across the road, tapped his fingers against it. The metal fingers of his right hand clanged on the hollowness; one of them cracked the surface. Metal and meat, everything rotted; it was just a question of timing.

He wondered, when he died, if his mechanical hand would be recycled before burial or if it would slowly rust beside his corpse, no more enduring than this old lamppost. If anything happened to Syd, he’d soon find out.

The Reconciliation had made it clear to him when he volunteered to be Syd’s bodyguard: Syd’s death would be answered with his own.

It seemed fair enough at the time.

A few months ago, when the Reconciliation was new, when they still called themselves the Rebooters, Liam had no idea how difficult guarding Syd would be. Syd gave Liam the slip at least once a week. No amount of yelling, scolding, or pleading could convince Syd that the danger to him was real.

Everyone knew who Syd was and what he’d done. Everyone knew it was Syd who sparked the Jubilee, Syd who erased the records of the past, Syd who severed the networks and destroyed the old systems of control. Syd who was the people’s savior.

Not everyone was happy about it.

No explaining that it wasn’t really Syd at all. His friend Knox had done it, had given his life doing it, in fact.

Syd lived on in the aftermath, just like everyone else.

How long Syd lived on in the aftermath was for Liam to worry about, and he was at the moment quite worried about it.

He bent down and checked the moss on a stretch of sidewalk. Indentations where feet had crushed it, morning dew pressed into the footprints. Recent. On the corner of a building a few yards on, he saw crumbs of concrete on the ground, green and rotted, and he found the spot at shoulder height where they’d broken off. He’d have to teach Syd to be more careful. Rotted concrete breaks easy as dirt and leaves a trail even a novice tracker could follow.

Higher up on the wall someone had carved some scratchiti into the mushy stone:

They must have run off before they could finish carving their treason. Purifiers stamped out talk of the Machine wherever they found it. They left the scratchiti—too much effort to erase—but if they caught the scratcher . . . well, Liam had once seen a pile of white Purifier masks delivered to a laundry detail and there was dried blood on every one of them.

He swung around the corner and crept low through an overgrown alley. Plant tendrils and branches tugged at his green uniform and scratched his face. He shifted the brush carefully with his metal hand and followed the path where Syd had passed before.

When he came out on the other side, Liam had gone through a break in a wall into the ruins of a monumental building. A canopy of branches and leaves filtered sunlight through the gaping roof. Patches of marble showed through great curtains of ivy. Daggers of light cut through a high arched window and fell in slashes across two parallel marble staircases, rising to a landing that cut the space in two.

At the top of the landing, there was a figure with his back to Liam, a green uniform, a white mask. The figure was leaning forward, looking down over the railing. He held something in his hand. It caught a glint of light. A weapon?

Liam could hear his own pulse in his ears. He exhaled half a breath and crept up the stairs. Even the change of air temperature from his exhalation could give him away. He didn’t want to spook his quarry. If he failed now, when it mattered most, when Syd was in the greatest danger, the best Liam could hope for from the Reconciliation would be a lifetime of hard labor. The more likely outcome would be his own public humiliation followed by his execution.

If he failed now, he would deserve it.

His whole life he had been trained to be a ghost, to slip in and out of secure areas unseen, to attack from the shadows and melt into beams of sunlight. He’d been born a guerrilla, serving the revolution of the Rebooters for every conscious moment of his seventeen years. Now he served the new order, which was the same as the old order, but with a new name: the Reconciliation. He was no longer a destroyer, but a protector.

Step by step, he approached the figure. He fought the urge to shout a warning. Instead, he grabbed the figure’s neck with his metal hand and wrapped his other hand around the forehead, quick as heat lightning. He jerked his hands in opposite directions and snapped the thin neck, then shoved the body forward over the railing, where it tumbled end over end and hit the hard earth with a crunch. The metal tube of a blowgun clattered across the floor as it rolled from the lifeless hand.

Liam looked down, where Syd stood just beside the body, staring in shock. Syd’s dark eyes, wide as moons, darted up to Liam’s.

“I’ve told you it’s not safe to go off alone,” Liam declared. “If I’d been ten seconds later, you’d be dead.”

He didn’t add
and so would I.

The Path to Rome by Hilaire Belloc
Wide Awake - Academy of the Fallen Series by Lanzarotta, Daniele
Malas artes by Donna Leon
The Devils of Loudun by Aldous Huxley
The Black Cauldron by Alexander, Lloyd
An Educated Death by Kate Flora
The Valley of Unknowing by Sington, Philip
Dan Taylor Is Giving Up on Women by Neal Doran
The Grasshopper's Child by Gwyneth Jones
The Outer Circle (The Counterpoint Trilogy Book 3) by Bell, D. R.