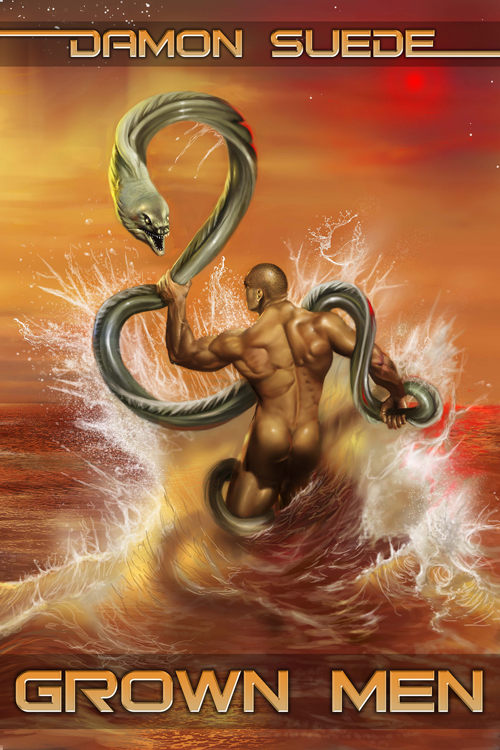 This is a work of fiction. Names, characters, places, and incidents are either the product of the author’s imagination or are used fictitiously. Any resemblance to actual persons living or dead, business establishments, events, or locales is entirely coincidental.

All rights reserved. No part of this book may be reproduced or transmitted in any form or by any means, electronic or mechanical, including photocopying, recording, or by any information storage and retrieval system without the written permission of the publisher, and where permitted by law. Reviewers may quote brief passages in a review. To request permission and all other inquiries, contact Riptide Publishing at the mailing address above, at Riptidepublishing.com, or at [email protected]

Printed in the United States of America
First edition
October, 2011

ABOUT THE E-BOOK YOU HAVE PURCHASED:
We thank you kindly for purchasing this title. Your non-refundable purchase legally allows you to replicate this file for
your own personal
reading
only, on your own personal computer or device.
Unlike paperback books, sharing ebooks is the same as stealing them. Please do not violate the author’s copyright and harm their livelihood by sharing or distributing this book, in part or whole, for fee or free, without the prior written permission of both the publisher and the copyright owner. We love that you love to share the things you love, but sharing ebooks—whether with joyous or malicious intent—steals royalties from authors’ pockets and makes it difficult, if not impossible, for them to be able to afford to keep writing the stories you love. Piracy has sent more than one beloved series the way of the dodo. We appreciate your honesty and support.

Every future has dirty roots.

Marooned in the galactic backwaters of the HardCell company, colonist Runt struggles to eke out an existence on a newly-terraformed tropical planetoid. Since his clone-wife died on entry, he’s been doing the work of two on his failing protein farm. Overworked and undersized, Runt’s dwindling hope of earning corporate citizenship has turned to fear of violent “retirement.”

When an overdue crate of provisions crashes on his beach, Runt searches frantically for a replacement wife among the tools and food. Instead he gets Ox, a mute hulk who seems more like a corporate assassin than a simple offworld farmer.

Shackwacky and near-starving, Runt has no choice but to work with his silent partner despite his mounting paranoia and the unsettling appeal of Ox’s genetically altered pheromones. Ox plays the part of the gentle giant well, but Runt’s still not convinced he hasn’t arrived with murder in mind.

Between brutal desire and the seeds of a relationship, Runt’s fears and Ox’s inhuman past collide on a fertile world where hope and love just
might
have room to grow.

For the Goodreads M/M crew who cleared the Soil.

For Poppy who planted the Seed.

For Brita who held back the Thorns.

For Emily who plucked the Bloom.

Transport delivered his murderer at sundown.

Runt had been semi-starving for three weeks when he returned to his habitat and found the huge cargo container in a shallow crater in the sand.

He might have missed it ’til morning, but coming back from the eelbeds, he almost stepped on a bold crab scuttling toward the turquoise water and dragging a shiny mealpak in its claw. Runt gave a whoop of relief and rescued the food from the startled, spiny thief.

Without even rinsing off the day’s grit, Runt popped the recovered mealpak and sucked the nutrient paste. Wasn’t like anyone could see him out here except the eels offshore and the insects yattering in the palm trees. Facing the broiling suns on the horizon, he turned to jog up the beach in search of the fresh provisions.

Runt’s prefab habitat sat tucked under a steep rock wall in view of the cove that provided some windbreak; the cargo had been dumped about twelve meters away on the slope down to the cove. The long crater around the container indicated the drop-ship hadn’t even slowed as it passed.

“Thank you!” His shout echoed off the pumice cliff.
Knobjobs.

The container itself had split at one corner, but the contents remained intact thanks to the impact-foam. Runt had gone hungry too many weeks to complain. If he couldn’t get this bitch open any other way, he’d hack in with the submachete.

At least he’d brought an industrial weapon with him. He stabbed the sand with the submachete and left the blade there, freeing his hands to dig out the treasure buried inside this overdue shipment.
And her?

Runt bent over the keypad on the undamaged end of the cargo, and with a calloused finger, he tapped in his farm code.
Hisssss
—a meter-long panel sighed open on the container’s side and fell into the hot sand.

Please let her be pleasant to look at.

Dispatch had wedged mealpaks and canisters and paraphernalia into every centimeter of the container and braced them in impact-foam for interstellar transport.

Hands shaking, Runt dug his calloused fingers into the dense padding and peeled off a thick strip. Reaching inside, he grabbed a handle and hefted out a tank of phytoplankton.

I’m saved. She saved me.

At a meter and a half high, the container stood almost as tall as he did and so jam-packed Runt had to haul out a few crates to gauge the contents. Atop a barrel of acid, a folded smart-net sat ready for action. Throw that in the ocean and it would go find dinner for him!
So much cargo . . . Since when did the HardCell suits take pity on anyone?

He tunneled back through padding and packages with hope in his heart. His stomach hummed pleasantly around the rich meal after being empty so long, but food wasn’t what he was looking for.

Dispatch always tossed in a few pretend-we-give-a-shit extras: candy and dice and lubricant, shiny gewgaws to keep the terraformers from getting shackwacky.

Something glowed faintly and he barked in relief, wrenching fistfuls of transport foam free to expose a tray of specimen tubes that just might save his ass.

His heart hammered. These little beauties had made it all the way to this crappy system in Andromeda from HardCell’s labs. The biodesigners spliced moths with bumblebee DNA to groom and pollinate vegetation, but rarely replaced them. Freed of the packing and woken by the tropical warmth, striped caterpillars glowed pale lavender in the shadows of the container. His crops would be saved in time!

As if handling lace coral, Runt extracted the tube trays in slow motion and set them in the shade until he could take them to the hive for hatching by the digital queen.

He knew it was foolish, but the fresh moths planted hope in him. Again he tunneled into the provisions looking for the woman and found more mealpaks, food tanks.

He shook his head in wonder. All this had to be a mistake at the depot.
Schmuck’s luck
. At least he wouldn’t starve this season.

Runt peeled away the cushion of impact-foam that had cradled the phosphorescent grubs and a tub of biotic lotion. Beneath, he found a bigger surprise from Dispatch: an old oversized life-support duffel big enough to hold a cow. For one moment he expected to discover his new mate, but when he unzipped the case a few centimeters, he found a lumpy four-meter roll of mirror-bright flex-canvas to wrap his habitat against tsunami and scavengers.
Help had finally arrived.

Hope made him stupid. He
should
have unpacked and unrolled it first thing, but in his eagerness he skipped it. HardCell must’ve sent the tarp as a wedding present.

Maybe someone loves me. Maybe this is a dowry.

HardCell, the conglomerate that owned Runt’s contract, had marooned him here in the middle of an alien ocean a year and a bit ago, long enough that his bare feet had leather soles, and his skin didn’t burn anymore. His bosses had shipped him to terraform remote planetoid HD10307-E in Andromeda almost as soon as they’d extracted their seismologists and genetic engineers. They’d altered its orbit to increase daylight, melted its ice into freshwater oceans, and dumped a few patented life forms into them to fight and fuck.

Mr Taboo (Microwave Fiction - Hot Quick Done) by Pollard, D T
A Street Divided by Dion Nissenbaum
Cross Hairs by Jack Patterson
In the Shadow of Swords by Val Gunn
To Tempt an Earl by Kristin Vayden
El bastión del espino by Elaine Cunningham
I Think You'll Find It's a Bit More Complicated Than That by Ben Goldacre
Storm of Sharks by Curtis Jobling
Blue Moon by Alyson Noël
Take a Chance on Me by Susan May Warren