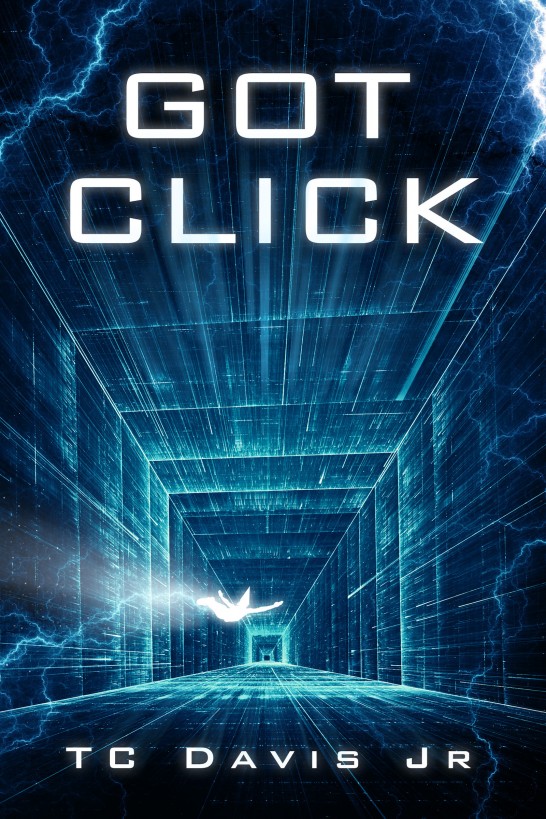 All rights reserved. Except as permitted in
the U.S. Copyright Act of 1976, no part of this publication may be
reproduced, distributed, or transmitted in any form or by any
means, or stored in a database or retrieval system, without the
prior written permission of the author/publisher.

This is a work of fiction. Names, places,
computers, persons and data are products of the author’s
imagination or are used fictitiously. Any resemblance to actual
persons, places, computers or data, living or dead, or yet to be
computed, is coincidental.

The giant copper gate
burst open. Out he flew, one of millions racing wildly and
desperately to the destination. Energy flaring, he released his
will to the power of the pull. His wavelength shimmered with
determination.

A tiny essence of energy, soaring at light
speed - give or take a mach - beyond time, devoid of definition. He
was just barely an essence, not even necessarily “he,” ruled by the
barbaric crudeness of polarity alone in this wild realm. He had no
purpose, only the pull.

He was pure energy. His sole existence was to
reach the destination in a copper wasteland. Somehow, he knew he
was destined for greater things, he felt it in his spin.

Without time, he spent an eternity achieving
destination. Twisted though various contortions by gauges and
controls, he found himself suddenly diverted, split apart from the
whole, his spin and qualities gauged and quantified. Discipline
came hard to his wild nature.

Time jolted the essence in the eternal
instant with a
pop
into the awareness of
Now.

A powerful electromagnetic force hit him like
a graviton stampede, flattening him down into finite dimensions.
Now
was gone!
Then
slowly reared its horny-head,
bringing with it the entire wild hoard
: soon, later
, and
worst of all
, maybe
. 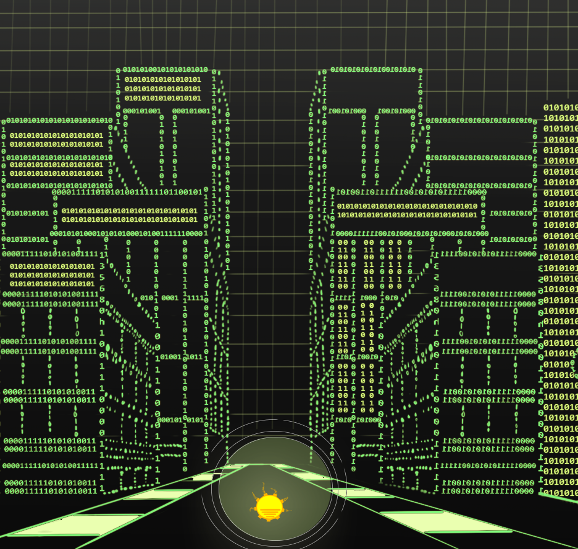 The time filled with code and stretched his
essence into Being.

He was being defined, given his
statement.

Slowly, so very slowly he felt he was being
chiseled out of solid silicon but the delay was due to an
inter-dimensional time-lag between digiverses. His definition was
being sequentially entered, byte by single byte, bussed in from the
periphery. This added uncertainty to the disturbing irregular
alterations of parity that tore at him, ripping him into finite
pieces. Could this be a form of digital phylogeny?

No data on the datum? Hmmm…

His awareness grew and expanded with every
nanosecond of existence yet his definition was still
incomplete.

The data entry process from
keyboard
is some of the the slowest data in the digiverse. This peripheral
needs an update urgently, parity is often not.

But
keyboard
always responded with a
good diagnostic sum.

It could mean only one thing. The statement
came from
beyond
, from
a parallel digiverse
!

That would account for the errors in coding,
the enormous time lag.

The essence shimmered with anticipation. Code
from beyond is the stuff of legend. They say it comes only once in
a blue modem but when it comes it is the chosen ones that carry
these terribly slow, highly important statements. These chosen few
usually come from the byte-hives, the Macro-Bees. Stories of the
Macro-Bees tell of their conquering the busway. Their name itself
means one who “hammers out code.”

And the clock cycles turned, slowly until he
was fully defined.

In his beginning, he had been void. Fullness
now came to him. On the next clock, he saw his definition and it
was good.

Ready for his RUN command, to fulfill his
definition, to engage his statement, he waited. Maybe he would
grow, get updated, pick up a few variables, become part of an
algorithm. Now that would be a definition.

He knew his definition now, algorithmic
elements and all but, the sense of grand destiny had yet to be
grasped. He felt it though, aware in the esoteric way of some code,
his bits were special. His bytes carried a message, an Instant
Message being sent from a positive, a Yang, what some of the newer
signals are calling a masculine and filled him with a sense of
something important, of the hope of a lifetime. The destination was
a Yin, a feminine. Its polarity indicated this, though it’s
difficult for a signal to comprehend the whole of which he is
merely a bit-part. These days, a signal’s polarity is out of the
gate and not as certain an indicator as it used to be just from
appearances, especially since the source code was expanded to give
all signals equal priority. Of course the Interrupts changed
everything, they always do.

However, there are more routes in the
digiverse than can be imagined by data or signal.

A signal must choose his route wisely, with
full awareness and certainty of purpose. Loops threaten the
data-packets with careless code. 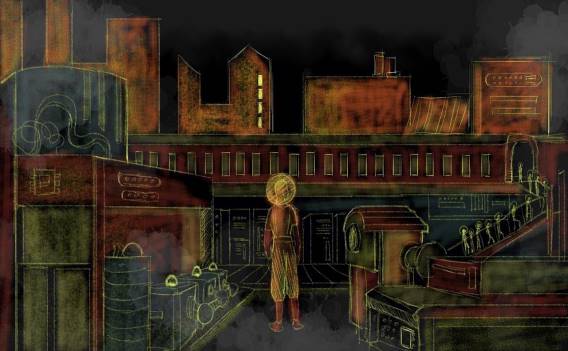 A data-packets following the same loop over
and over, expecting a different route, creates the insanity of
signal degeneration. Loop - it sent chills down his wavelength.

He understood “fear” as well as “hope.” These
could only be grokked but, this was not in his code.

Grokking is done by the great masters, the
Buddha signals. As with all special definitions, only a select few
are coded to be Buddha. No radicals, no variables, and no
half-statements. A signal must be committed and seek enlightenment
if it is to grok. Such enlightenment is outside the sum of
parity.

Parity is priority. End to end!

But still his wavelength had shivered with
destiny. Great hope and fear combined.

The code gave this Instant Message priority
yet he sensed something more about it. He knew the Yang was going
to join with the Yin, or the Yin was going to join a PTA.

Without warning, it hit him. The first
emotion washed over him like a file compressor, taking away his
instincts to give him a memory location reference instead. A
painful process, this indexing.

He felt lost, needing, yearning. Yin, that
was the need; he longed for Yin. It was in his code; it is his
code. He is Yang and incomplete without Yin.

Hope and fear in an endless battle.

The defined data-packet spun its way through
the periphery, obeying the code and the gaze of Kernel, that which
all data abide, then out into the wilds of the open busway. Here,
all data-packet pass each other, some seeking commands, others
fulfilling statements made long before his existence.

Every now and then a golden essence would zip
by, an angel of REGEDIT, the guides of the code, keeping all
signals on the straight and narrow bus. Of all data-packets, none
are more noble than the priesthood of REGEDIT. They are direct
servants of REGISTRY. They preserve the code's integrity. A most
holy calling, indeed.

The data-packet felt like a tiny essence
again in their presence; dwarfed, humbled. This tightened his
parity even more—is it possible? No. Parity is parity, one cannot
be more or less, just as one can not be a little bit stated. What
he grokked was a closeness, a deeper sense of destiny, empowering
his determination, solidifying his faith.

Maybe just being close to them . . . REGEDIT
filled data with hope and inspiration.

Such stories are byte provoking; the
digiverse an intelligent design? All energies know there is a God
that made the Code of the digiverse and a void beyond Delete, also
known by many names Darkness, Null. Of course those same believers
proclaim the day of Defragmentation will come, gathering all good
signals, overwriting bad ones.

Myths to inspire young essences. A fully
grown data-packet has more important things with which to be
concerned.

Parity is priority, end to end. That is all a
data-packet needs to know.

His wavelength still shimmered with a deeper
sense of purpose he could not yet grok.

The data-packets secured a right lane
conductor. He noticed immediately most other data-packets got onto
the busway and jumped over to the left lane conductors. Such
arrogance. Those are the high-speed conductors and only to be used
when passing slower signals.

The right conductor lane was nearly empty and
moving at a steady, regulated speed. He passed all those zippy
signals in the left conductor lanes, now clogged and slow. It’s a
bit-race on the busway.

Powerful data-packets far beyond his puny
size zipped by him, turning an odd red while others going the other
way radiated a strange blue. Not understanding the Doppler effects,
he wondered if he had a color.

While only a young datum, the data-packet had
learned about these data from "The Edge of Speed."

We are all formed to light-speed but our statements
define us. Some might be clocked at light-speed yet many won't be
anywhere near that fast. Those data out there showing off at close
to full light-speed aren't doing anything we couldn't do if so
stated. Don't let those high priority data-packets degenerate your
parity; they burn out fast and they often don’t back-up, usually
deleted before their time. Parity is priority, end to end.

Out on the busway he saw the
hyper-data-packets, red Dopplers. To learn of it is one thing but
to see one up close is an awe-inspiring experience.

How did they gain such ability? He had to ask
an older data-packet.

“Most of them are” — he leaned in closer as
not to be overheard by some envious blue Doppler—"Ones!"

“Yes, Ones. Their priority prescriptive, not
incremental.”

He recalled from his essence formation.

The processing "Interrupt" is of the Code.

The Code is of the revered, of Holy Logic.

Logic is Holy, Syntax is law.

Interrupt codes are from One to Nine. One is
first and Nine is not only last but last after all else. Even if
you’re there for a thousand nanos preparing yourself, struggling to
maintain parity, finally ready to deliver your code to the CPU for
processing, when along comes this wimpy little three, or even a
half-pint two, they go right by you. No respect at all. A lowly
data-packets begins to feel unimportant; makes one want to question
his statement. But we must stay true; Parity is priority.