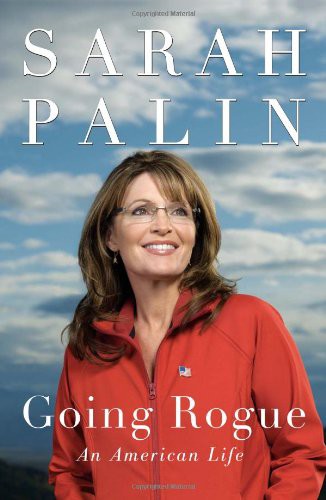 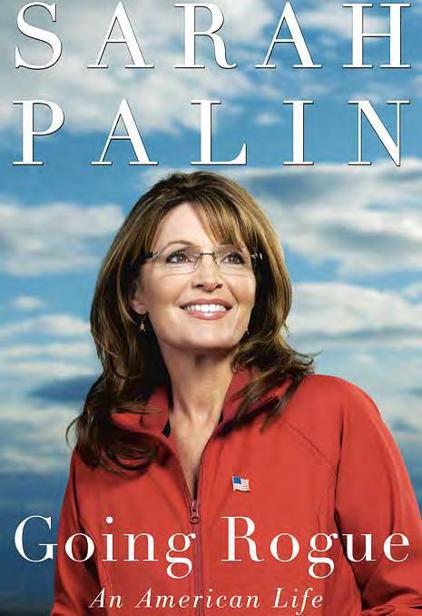 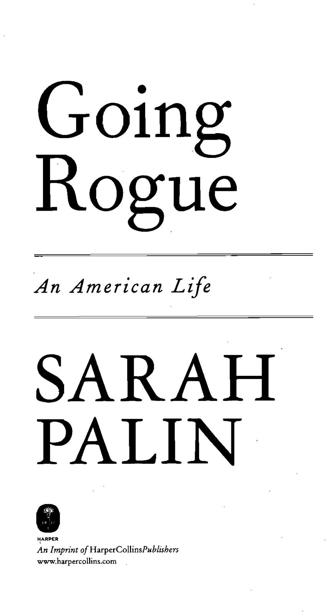 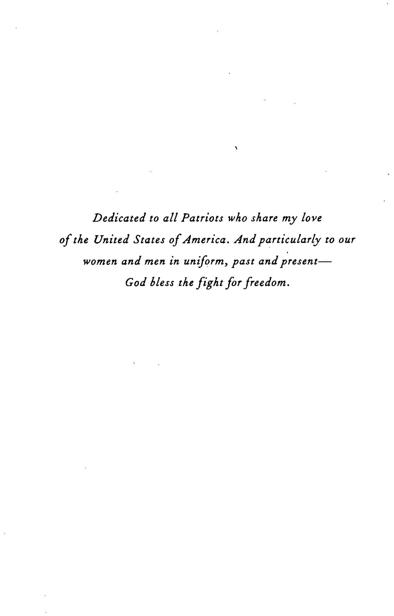 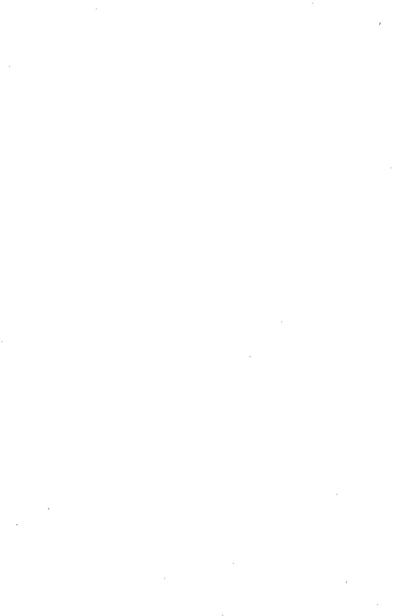 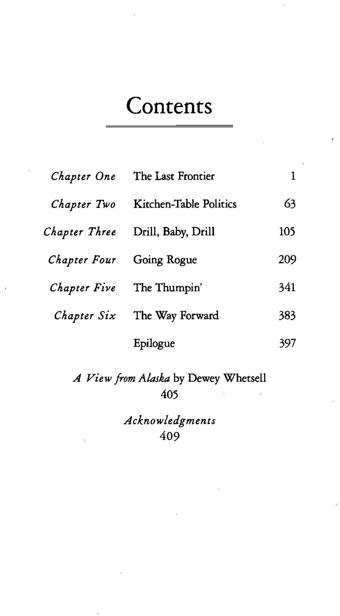 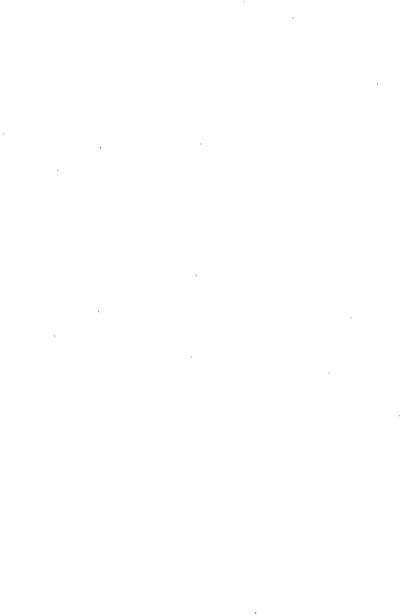 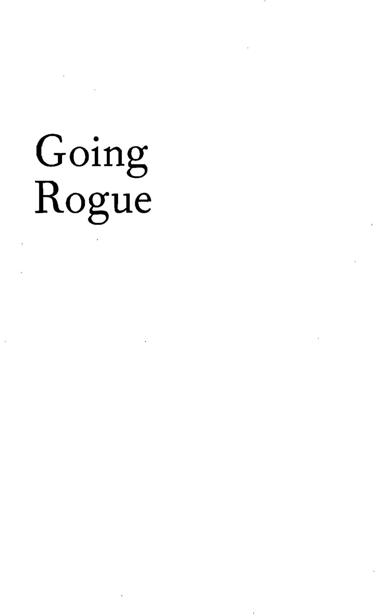 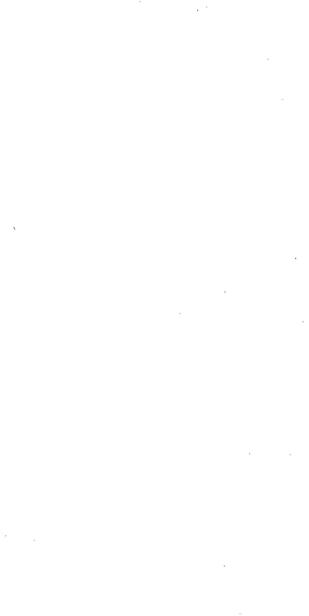 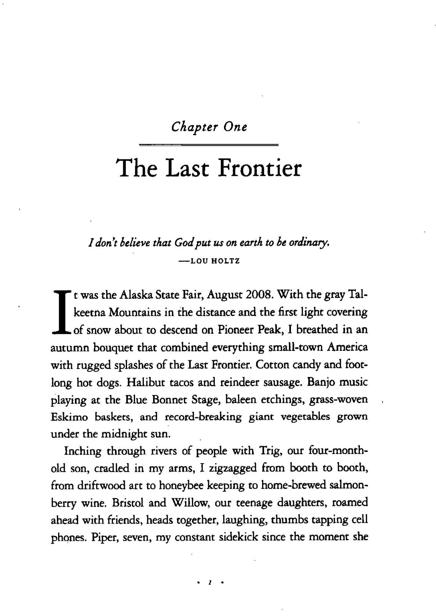 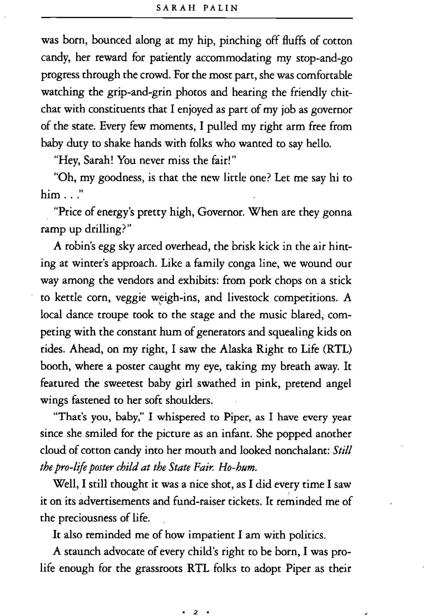 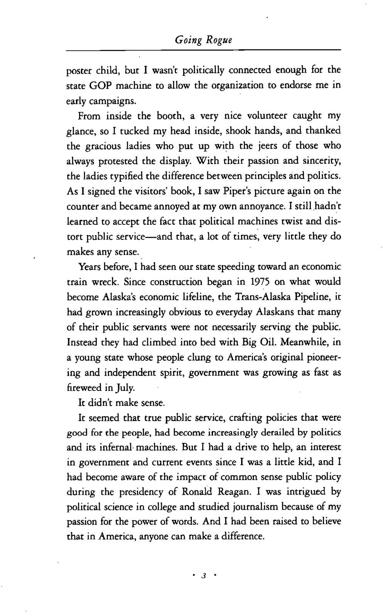 So I got involved. I served first on the Wasilla City Council, then two terms as mayor, helping turn our sleepy little rown into the fastest-growing communiry in the state. Then I served as an oil and gas regulator, overseeing the energy industry and encouraging responsible resource development, Alaska’s main economic lifeline. In 2002, as my second mayoral term wound down, my husband, Todd, and I began ro consider my next step. With four busy kids, I would certainly have enough going on ro keep me occupied, even if I chose ro put public service aside. And for a while, I did. But I still felt a restlessness, an insistent tugging on my heart that rold me there wete additional areas whete I could contribute.

From what I could see from my position in the center of the state, the capital ofJuneau seemed stocked mainly with “good 01’

boys” who lunched with oil company executives and cut fat-cat deals behind closed doors. Like most Alaskans, I could see that the votes of many lawmakers lined up conveniently with what was best for Big Oil, sometimes ro the detriment of their own constituents.

When oil began flowing from Prudhoe Bay in 1977, billions of dollars flowed into state coffers with it. The state raked in more revenue than anyone could have imagined-billions of dollars
almost”overnight! And the politicians spent it. Government grew
rapidly. One quarrer of our workforce was employed by state and local governments, and even more was tied to the state budget through contracts and subsidies. Everyone knew there was a certain amount of back-scratching going on. But an economic crash in the 1980s collapsed the oil boom. Businesses closed and unemployment soared. During the oil boom, anyone who questioned the government’s giving more power ro the oil companies was condemned: What are you trying to do, slay the golden goose? But when the boom • 4

went bust, the golden goose still ruled the roost. By then, state government was essentially surrendering its ability ro act in the best interests of the people. So I ran for governor. I didn’t necessarily get into government to become an ethics crusader. But it seemed that every level of government I encountered was paralyzed by the same politicsas-usual system. I wasn’t wired to play that game. And because I fought political corruption regardless of party, GOP leaders distanced themselves from me and eventually my administration, which really was fine with me. Though I was a registered Republican, 1’d always been without a political home, and now, even as governor, I was still outside the favored GOP circle. I considered that a mutually beneficial relationship: politically, I didn’t owe anyone, and nobody owed me. That gave me the freedom and latitude to find the best people to serve Alaskans regardless of party, and I was beholden only to those who hired me-the people of Alaska.

Still in the RTL booth, Piper said she was ready to go. She was antsy to stop by the fair’s hula hoop contest, so I hurriedly shook a couple more hands and gathered Trig back from the nice lady who had asked to hold him.

I had certainly gotten off on the wrong foot with the Republican Party by daring to take on the GOP Chairman Randy Ruedrich, and then incumbent Governor Frank Murkowski. Party bosses weren’t going to let me forget that I had broken their Eleventh Commandment-“Thou shalt not speak ill of a fellow Republican”-even if Murkowski did have a 19 percent approval rating, his chief of staff would later plead guilty to a felony charge, and it appeared corruption was growing at a breakneck pace. I didn’t have time to waste embracing the status quo and never had it in me to play the party’s game. That just meant 1’d have to work harder, advancing the state not on the currency of traded favors but on the strength of ideas that proved themselves good • 5

The Borgia Betrayal: A Novel by Sara Poole
Seduced by Power by Alex Lux
A Family for the Holidays by Sherri Shackelford
The Penguin Who Knew Too Much by Donna Andrews
Playing with Power - Book 3: New Adult Office Romance by Huxley, Adele
The Milkweed Triptych 01 - Bitter Seeds by Ian Tregillis
The Stolen One by Suzanne Crowley
Three Little Words by Ashley Rhodes-Courter
A Proscriptive Relationship by Jordan Lynde
An End by Hughes, Paul