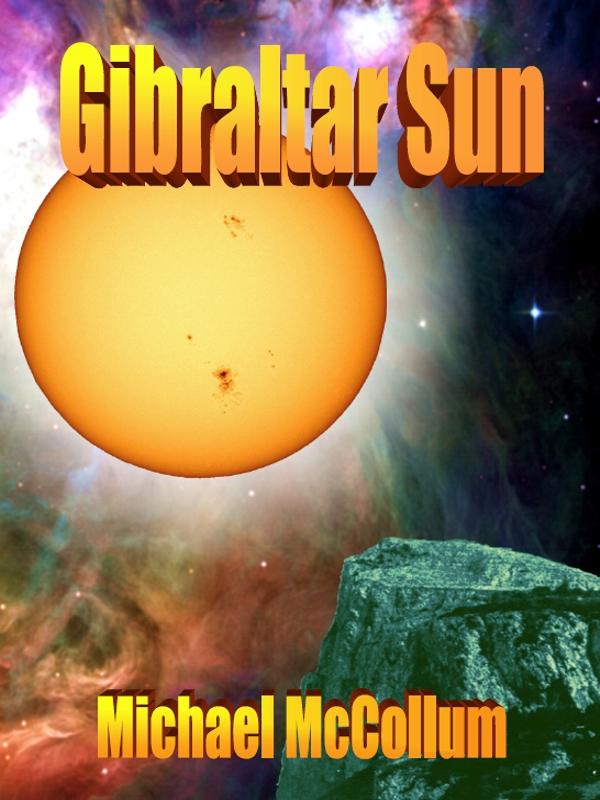 A Virtual Science Fiction Bookstore and

Writer’s Workshop on the INTERNET

All rights reserved under International and Pan-American Copyright Conventions. Published in the United States of America by Sci Fi - Arizona, a virtual science fiction bookstore, and writer’s workshop located on the INTERNET at www.scifi-az.com.

The Rock of Gibraltar

The Rock of Gibraltar

INTO THE DEEP BLACK

In a fit of exasperation, Germany’s Iron Chancellor, Prince Otto von Bismarck, once remarked,
“There is a Providence that protects idiots, drunkards, children and the United States of America.”

Bismarck’s comment has a special relevance for our current situation. For, if not an act of providence, how else to explain that we learned of the Broa before they discovered us? And, having become aware of their existence, what were we to do with that knowledge?

How should we secure our future against a species that enslaves every star system of which they become aware? Do we abandon our own colonies among the stars, retreat back to Earth, and pray the galactic overlords overlook us for a few more generations? Or do we take a more activist approach and risk immediate annihilation?

This conundrum became known as The Great Debate. And if the answer seems obvious in retrospect, consider that it was far from clear at the time. Those who faced the choice lacked our advantage of hindsight. Indeed, the fact that we even had a choice was something of a miracle.

Had a Broan craft stumbled across one of our interstellar colonies, the first we would have known of it was when their war fleet appeared in our skies and demanded our surrender.

Human nature being what it is, our species would never have submitted meekly. Our first impulse, and last, would have been to resist. In so doing, we would now be extinct. The Broa would have turned the Earth into a burned-out, radioactive cinder; and those of us who so loudly hail our recent victories would now be mere dust, blowing on a hot, dry wind.

Therefore, fellow revelers, when you celebrate tonight, c
onsider for a moment what might have been
—
”

From a Victory Speech by the

To the World Parliament

The morning sun was one-third up the vault of the sky as the silver bullet car came into sight of Lake Constance. Racing through a Swiss countryside dotted with picturesque villages scattered among green vineyards, the needle-nosed car jumped from one elevated electromagnetic accelerator ring to another, defying gravity with each effortless leap. At 500 kilometers per hour, the car left a condensation trail in its wake as its passage roiled the humid summer air.

Inside the car, Mark Rykand and Lisabeth Arden cuddled together on one wide seat and watched the world slip by beyond their window. After nearly three years in space, the greens, browns, and blues of Earth held a fascination that neither of them could readily have explained.

“Look, Mark, it’s the lake!” Lisa said at the first sight of the blue expanse on which could be seen a cluster of white sails. Lisa was a petite blonde with eyes of green and a nose that turned up at the end. Her mouth was a bit too wide for her face, with a tendency to dimple when she smiled. The permanent tan had faded after three years of living in vacuum, bringing forth the naturally fair complexion common to women of the British Isles.

“Won’t be long now,” he replied as he reached up to caress her cheek. Mark was of average height with a shock of sandy hair and blue eyes, and a smile that turned up more on one side than the other. His muscular physique had atrophied a bit aboard ship, despite his thrice weekly visits to the cramped gym in the engineering spaces. Even so, his torso remained comfortably taut, with no sign of the paunch he worked so hard to keep off.

On the opposite side of the lake, the glass-and-steel pyramid of Stellar Survey Headquarters was briefly visible before the line of pylons topped by accelerator rings dipped behind a low hill. The sight reminded him of the last time he had taken this particular journey.

It was not a pleasant memory.

For Mark, the adventure/ordeal had begun when he returned home late one night from a party to find an emergency message flashing on his apartment phone. Mark punched for playback and found himself looking into the eyes of a stranger.

The man identified himself as the duty officer at Stellar Survey Headquarters in Germany, and asked that his call be returned as soon as possible. A call from the Stellar Survey could only mean one thing — something had happened to Jani!

Mark had last seen his sister at White Sands Spaceport three months previous when he had seen her off on her latest mission for the Stellar Survey. Jani had joked and laughed the whole time they waited for her shuttle to board. His last sight of her had come as she waved goodbye from the passenger bridge, her wild copper mane blowing in the wind.

It took two tries to punch in the number listed, his hands were shaking so. It took only seconds for his suspicions to be confirmed. “I am sorry, Mr. Rykand,” the duty officer intoned. “Your sister was killed in an accident three weeks ago while on a mission in the New Eden System.”

Grief washed over Mark like a sea of heavy mud. That grief had turned to suspicion when the officer proved unable to provide details of Jani’s death. After a sleepless night, he booked a suborbital flight to Zurich, and from there, rode this very bullet car toward Meersburg and the headquarters of the Stellar Survey.

“What’s the matter, my love?” Lisa asked, noticing his sudden silence as she snuggled closer. The sweet smell of her blonde hair and the familiar warm softness of her body snapped Mark back to the present.

“I was just remembering the last time I was on this line.”

“Oh, sorry,” she replied, reaching out to squeeze his hand. After lovemaking, they often spoke in whispered intimacies in their darkened cabin, communicating as couples have done since time immemorial. They sometimes spoke of the tragedy that had brought Mark into her life.

Having concluded that the Stellar Survey was lying, Mark searched the information nets for news of
Magellan
. He was not surprised to learn that the starship had returned to the Solar System. After all, how else could the Survey have learned of Jani’s death?