Read Gertruda's Oath: A Child, a Promise, and a Heroic Escape During World War II Online

Gertruda's Oath: A Child, a Promise, and a Heroic Escape During World War II 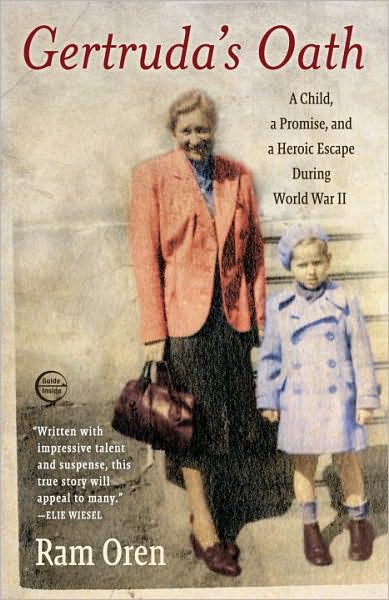 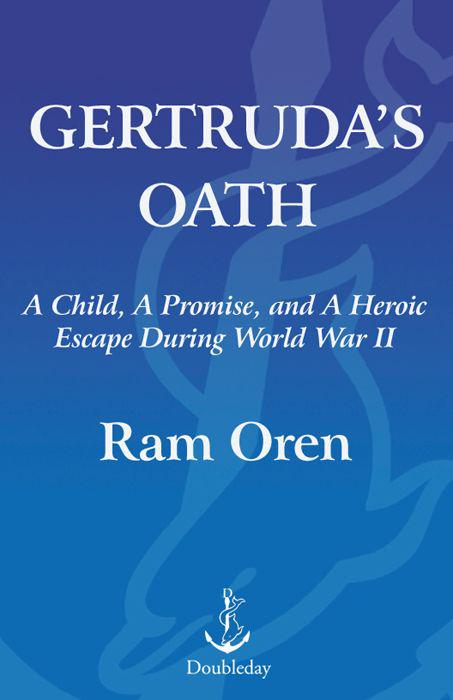 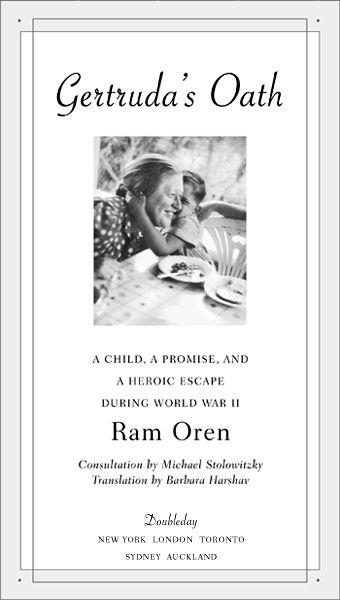 CHAPTER 2
:
A Prince Is Born

I am grateful to Michael Palgon, Kevin Tobin, and the entire Doubleday team involved with this book. I’d like to thank my editor at Doubleday, Darya Porat, not only for her faith and determination in bringing this book to an English language audience, but also for overseeing the books translation and for her talents as a diligent, deft editor of the books manuscript. Deep thanks to our wonderful agent, David Kuhn, and Billy Kingsland from Kuhn Projects, who skillfully guided us throughout this project. To Geoffrey Weill—thank you.

To Professor Elie Weisel, for the kind words.

Also to the late Chaim Stolowitzky, Dr. Mordecai Paldiel, Judge Arie Segalson, the late Elisheva (Helga) Rink-Bernson, and to the captain of the
Exodus
, Ike Aaronovitch.

And last but certainly not least, to my dear friend Michael Stolowitzky, without whom this book could not have been written.

Gertruda’s Oath
is a true story. All of the events described in the book are based on my interviews with family members and survivors of the Holocaust, contemporaneous documents, and my research of those events. However, because
Gertruda’s Oath
is based in large part on the recollections of those involved (many of whom have since passed, including Gertruda), it was necessary for me to use my skills as an author to compose parts of the dialogue and to fill in details of certain events to facilitate the narrative. Michael and Gertruda’s story, and the story of all those affected by the Holocaust, is poignant history, and is here told as close to fact as possible.

The smoke clouds of war slowly began to dissipate and the spring sun broke through, caressing the ruins that buried tens of thousands of human beings, flooding the devastated streets, and scattering sparks of light on the waters of the broad Vistula River that slowly bubbled up to wash away memories of dread and death.

On the hill, above scarred Warsaw, stood the ancient and magnificent mansion of the Stolowitzky family, which had miraculously survived the war intact. Four floors of hewn stone, carved edges, statues of ancient warriors on the roof ledge, impressive mosaic windows and painted wooden ceilings.

Only two of the original inhabitants of the mansion were still alive, a boy and his nanny, and they were on their way to another country, far away. In their new home, between peeling walls, rust spots spreading in the bathtub, and cheap furniture—that mansion with all its splendor and charm seemed like a daydream, the product of an overactive imagination.

The boy and his nanny, who adopted him as a son, lived in a small apartment in one of the alleys of Jaffa, in a tenement. From the window, they saw only dreary buildings, children playing in an abandoned yard, and women returning home from the market, carrying heavy shopping bags. Most of the day, the apartment was invaded by the noise of passing cars and the stench of garbage. In winter the smell of mildew permeated the rooms, and in summer the walls trapped a blazing stifling air.

In the mansion on the hill, everything, of course, was different. The big building with its spacious wings, its gardens, was properly heated in winter and properly cooled in summer. A pure breeze from the river blew in the windows and servants tiptoed about to avoid any undue noise. The closets were stuffed with expensive clothes. Luxurious meals were served in rare china dishes. The old heavy cutlery, polished clean, was gold, and the wine was poured into fine crystal glasses.

Michael Stolowitzky and his adoptive mother, Gertruda, had survived the war and now both of them were struggling to survive in the new land. He attended school. She was past her prime by now. Every morning she’d go to work as a cleaning woman in the northern part of the city and return in the evening, her joints aching and her eyes weary. Michael would greet her with a kiss, take off her shoes, cook her meager supper, and make her bed. He knew she was working too hard only to have enough money to send him to school and provide for all his needs. He swore that someday he would pay her back generously for everything she had done for him—for saving him from death, for devoting her life to him, for making sure he didn’t lack anything.

Poverty and shortages weren’t strangers to Michael Stolowitzky. He had experienced them throughout his journey of survival in the world war, but he also saw light at the end of the tunnel, the end of
penury, the end of the daily struggle for existence. He believed that someday, in the not-too-distant future, everything would change and things would go back to the way they were, to the days when they knew wealth and comfort, days far from suffering and torments.

His rosy future was within reach, clear and concrete. Only a four-hour flight from Israel lay a blocked treasure, millions of dollars and gold bars deposited in Swiss banks by his late father, Jacob, the Jew who was called “the Rockefeller of Poland.” Michael was his only heir.

The legacy, a small recompense for the suffering and loss of the war, filled Michael’s thoughts and assumed a central place in his fantasies. When he was recruited into the Israeli army, he waited impatiently for his military service to end so he could work on getting the money. He was sent to a battle unit and was wounded in the leg by a bullet from a Syrian sniper during a firefight in the northern Kinneret.

Groaning in pain, he was taken to the operating room in the hospital in Poriya. When he opened his eyes after the anesthesia wore off, he saw his adoptive mother weeping. He held his weak hand to her and she clutched it to her bosom.

“Don’t cry,” he said. “I promise you that everything will be fine.”

When he was discharged from the army, he returned to their small apartment and the very next day he went to look for work. No work was beneath him. He was a messenger on a scooter, running around all hours of the day among customers in Tel Aviv; he worked as a waiter in the evening; and he was a guard at a textile factory at night. It was important for him to save up money.

Two years later, in June 1958, he took all his savings and the surviving family documents and bought an airplane ticket to Zurich.

“How long will you be there?” asked Gertruda anxiously.

“Two or three days. I don’t think I’ll have to stay any longer than that.”

“And if they won’t give you the money?”

He smiled at her confidently. “Why won’t they? You’ll see, I’ll come back with my inheritance and our whole life will change,” he promised.

She went to the airport with him and kissed him good-bye.

“Take care of yourself,” she said. “And take care of the money. Don’t let them steal it from you.”

He got on the plane, excited and anxious. In Zurich he rented a small room and couldn’t fall asleep all night. He had only the name of one bank among those where his father had deposited his funds, and the next day he went there. He pictured the bank clerks bringing him heaps of money and his adoptive mother welcoming him when he got back to Israel, rich and carefree. He knew exactly what he would say to her:

“We’re rich, Gertruda. Now we’ll move to our own house, we’ll buy whatever we want, and most important—you won’t ever have to work again.”

And she would wind her arms around him, and would say to him, as always:

Shrouded in a uniform decorated with the military medals inherited from his forefathers, the marquis Stefan Roswadovsky bit his lips in rage and drained another glass of brandy. He was a potbellied, ruddy-faced man, whose seventy-two years had passed in a nonstop journey of pleasures. Under his broad jaw, like a plump dumpling, hung a pink double chin, which grew and thickened as the rest of his body swelled with his gluttony.

From the yard came the rustle of carriage wheels entering the gate, and the taste of nausea, as the taste of impending disaster, rose in the marquis’s throat. What wouldn’t he give to prevent this?

Gloomy leaden clouds, like his mood, hung over Warsaw. A thin silent rain fell on the flower gardens of the mansion at Ujazdowska Avenue 9 when the carriage stopped and the driver jumped from his seat and opened the door. A man of about forty, lean and tall, in an elegant wool coat, got out of the carriage. His face was firm and his step supple and confident. The driver opened an umbrella over his
head and walked him to the door. From the corner of his window, the marquis watched them in despair. In a few minutes, he knew, the door would be opened and the honor that had been the glory for generations, passing as a legacy from father to son, his family honor and his own honor, would be trampled and desecrated by a coarse foot.

A servant with a frozen face, wearing a black frock, led the guest in and took his coat.

“Will the gentleman please wait until I announce his arrival,” he said submissively.

The marquis hesitated. “It won’t hurt the Jew to wait a little,” he grumbled. He needed more time to prepare for the meeting.

With a sigh, the marquis sank deeper into his armchair. His forefathers looked on from the velvet-covered walls, decorated army officers, bearing swords, astride noble steeds with gleaming hides. Next to them, in gold frames, were the portraits of their beautiful plump wives in splendid gowns, wearing gold jewelry and diamonds. Persian rugs, woven by experienced artists who toiled for days in the cellars of Isfahan and Shiraz, were spread from wall to wall, and beautiful furniture that could adorn royal palaces stood in various corners of the spacious office.

The Fourth Motive by Sean Lynch
Nefertiti by Michelle Moran
D is for Deadbeat by Sue Grafton
Kat: Breaking Pointe by Sebastian Scott
Werewolves & Wisteria by A. L. Tyler
Beneath the Patchwork Moon (Hope Springs, #2) by Alison Kent
Detroit: An American Autopsy by Leduff, Charlie
Depths of Salvation (Love on the Edge) by Lee,Molly E.
Kicking Tomorrow by Daniel Richler
Of Gods and Wolves by Amy Sumida