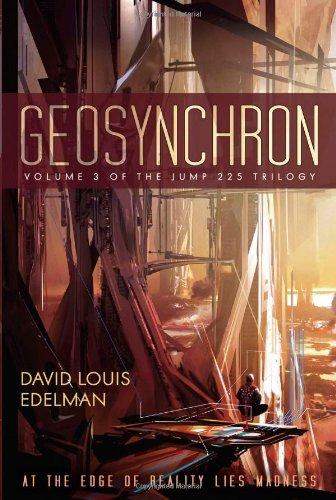 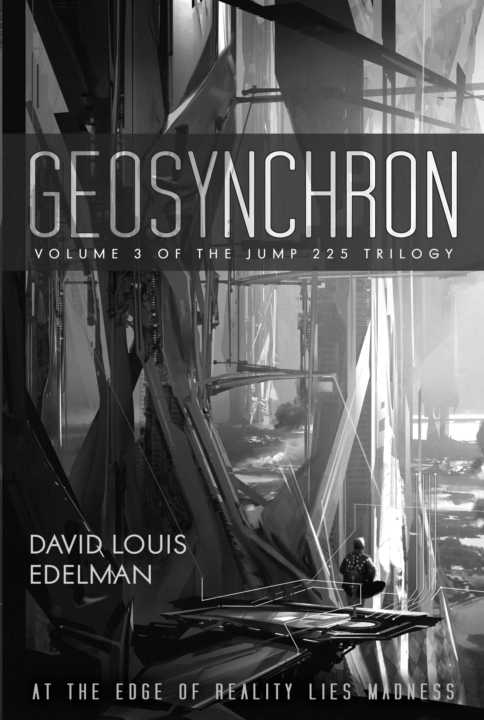 PRAISE FOR INFOQUAKE:
VOLUME I OF THE JUMP 225 TRILOGY

"David Louis Edelman's debut novel-the first installment of his Jump 225 trilogyis equal parts corporate thriller, technophilic cautionary tale, and breathtakingly
visionary science fiction adventure.... Brilliantly blending the cutthroat intrigues of the
high-tech business world with revolutionary world building, Edelman could quite possibly be the love child of DonaldTrump andVernorVinge. Infoquake is one of the most
impressive science fiction debuts to come along in years-highly recommended"

"Slick high-finance melodrama and dizzying technical speculation lift Edelman's SF
debut, the first of a trilogy.... Natch's being a borderline sociopath makes him
extremely creative in business tactics and personal manipulation (and thus fascinating to read about). The world in which he operates is also fascinating, with awesome personal powers being sold on a frantic open market. Edelman, who has a
background in Web programming and marketing, gives his bizarre notions a convincing gloss of detail. Bursting with invention and panache, this novel will hook
readers for the story's next installment."

In Web designer and programmer Edelman's first novel, he moves quickly from
scene to scene, building suspense with believable characters and in-the-know technical expertise. This series opener belongs in most SF collections"

"A thought-provoking and terribly imaginative book ... Infoquake is one of those
books that hooks you into the story and makes you never want to put the book
down. But once you have decided that you must get some sleep before work the
next day, you put the book down and find yourself unable to stop thinking about
the questions raised by the story."

The manner in which people who experienced Dune upon its publication speak
about Herbert's opus is not dissimilar to the feeling Infoquake elicits-the genre
might not be quite the same after this book....Infoquake is a stunning debut novel
by a lucid, precise, and talented new voice in the genre.... This may beTHE science
fiction book of the year."

"A high-speed, high-spirited tale of high-powered and low-minded capitalist skullduggery, corporate and media warfare, and virtual reality manipulation. It's the sort
of thing that would make a perfect serial for Wired magazine.... Edelman seems to
have convincing and convincingly detailed knowledge of the physiology and biochemistry of the human nervous system down to the molecular level. And [he]
cares about making his fictional combination of molecular biology and nanotech
credible."

"Infoquake is a triumph of speculation. Edelman has foreseen a nanotech future of
warring corporations and stock markets of personal enhancement in which both
the good and the bad of the present day are reflected with an even hand and startling clarity.... It's Wall Street meets Neuromancer.... Infoquake is a tech-heavy exercise in scientific speculation that combines economics, high technology, and business
mechanics into an all-too-human story of greed, loss, and redemption."

"Edelman has one hell of a hoot taking high-tech marketing out to draw and
quarter it with style and panache. Infoquake is a very funny and insightful novel of
modern economics through a futuristic funhouse mirror.... It's the kind of book
that deserves to be passed quietly from cubicle to cubicle in tech companies
around the nation and indeed around the world. And it's the kind of novel that you
want to be passing, the kind of novel you want to be reading.... Edelman, [Cory]
Doctorow, and [Charles] Stross are, like all great science fiction writers, not really
writing about the future. They're responding to the present.... Edelman's vision in this regard is particularly sharp and particularly on-point. There's a certain amount
of satire going on here, but Edelman is quite serious about his world, which makes
it all the easier to invest in his characters and settings."

If all novels were as chockfull of ideas as Infoquake is, then science fiction would
never have to worry about a shortage of sense of wonder.... Edelman is like a
more accessible [Charles] Stross; whereas Stross's fiction is about as dense as it can
get and still be readable, Edelman's style is more inviting and, to me, more appealing.
... Few first novelists manage as assured a debut as Infoquake; almost all new
authors stumble around a bit in their first novel, but Edelman comes off as a seasoned professional."

The hyperbole surrounding this novel seems justified-drawing on cyberpunk and
singularitarian themes, it boldly places a banner for what is arguably a new subgenre
of science fiction.... As an engaging fictional mirror of the modern world, written
from an angle rarely used, this novel definitely marks Edelman as a writer to keep
an eye on.

"A brisk, well-told science fiction adventure set in the normally unadventurous
world of business.... Edelman handles it all with considerable narrative drive.... A
simple old-fashioned story, where incident crowds onto incident, where jeopardy
makes us hold our breath, and rabbits are pulled from the hat only at the very last
moment"

"There's always the risk that a complicated setting will overwhelm character and
story, but Edelman avoids this pitfall, evoking a surprising amount of empathy for
the amoral yet oddly charming Natch, and injecting a tremendous amount of suspense into what is essentially a saga of corporate politics.... The novel also
addresses weighty themes: the destructive price of greed, the unchanging relentlessness of the human drive to innovate and to compete.... An entertaining and
intelligent debut that should leave readers eager for more"

"(4/2 stars) A very strong debut novel mixing a historically detailed timeline with an
intriguing technological future. David Louis Edelman makes reading about corporate shenanigans fun.... Infoquake should appeal to just about any SF reader, but if
you like [Frank] Herbert's Dune or any of [Charles] Stross's work, you should really
enjoy this boob"

"(Rating: 9 out of 10) This book was superb. I simply cannot believe that this is a
debut novel, it reads so much more like the work of a seasoned writer.... This book
however is anything but boring-it grips you from the start and leaves you at the
end of the book wishing you had book two at hand"

"Infoquake is practically a cyberpunk novel, although unlike the works of William
Gibson, author David Louis Edelman actually knows his subject and isn't prone to
making errors.... Edelman has done an excellent job of bringing characters to life
for a new writer. He even made business deals interesting. This is also very highgrade science fiction, using the trappings and then adding more"

An intense futuristic tale of business, intrigue, revenge, and technology.... This has
the potential to be a terrific series filled with innovative concepts and enough
double-dealing to keep the reader guessing."

"Edelman has managed to capture the mania and obsession of Internet moguls
nicely.... I found Infoquake interesting, and genuinely wanted to find out what happened next. The characters in the book are quite like people I've known in the
world of international entrepreneurship."

"A study in drive and power, Infoquake shows the drive and need behind the rise
of new corporations....Infoquake remains a raw and fascinating novel, with a fast
pace and nifty economic themes"

Prometheus, the newsletter of the Libertarian Futurist Society

"Edelman has created a fascinating world.... The interactions between Natch,
Horvil, and Jara (who is both attracted to and disturbed by her boss) are volatile,
complex, and very, very realistic. It is easy to believe in these people, and even feel
like maybe this is a future that is not too far away.... It would be good to have a
few months to ponder Infoquake before plunging into the next work, as I plan to
do this summer, exploring more of this utopia/dystopia and enjoying a truly compelling tale."

"So fresh and good I shamelessly stole an idea from it: the whole premise of a
future corporate thriller.... Buy Infoquake, read it.... Give him the Philip K. Dick
Award"

"Inventive and provocative, with a surprisingly emotional kick. Read this book, and
then argue about it."

"Infoquake is a rare beast: a future history that is simultaneously convincing and
wondrous. David Louis Edelman takes no shortcuts to a destination quite unlike
any visited before-and we are richer for it."

"A fascinating glimpse into an all-too-possible future of business, software, wetware,
and over-powerful technocrats"

"My favourite SF novel of the year. A future of business and competition that we
can all identify with, which neatly avoids apocalyptic cliche.... [Infoquake] stayed
with me, kept on impressing me way after I'd finished it.... Its setting is something
I haven't seen for a long time, a quite distant future that is nevertheless utterly plausible.... I have faith in this Mundane masterpiece."

Paul Cornell, novelist and screenwriter for Doctor Who

PRAISE FOR MULTIREAL:
VOLUME 2 OF THE JUMP 225 TRILOGY

"A sly variation on the traditional cyberpunk novel, Edelman's sequel to 2006's Infoquake views a stunning new technology through the eyes of the cutthroat executives vying to market it.... Edelman brings fresh air to the technological thriller....
MultiReal itself is firmly established as one of the most fascinating singularity technologies in years, and the inconclusive feel of this installment will build anticipation
for the third Jump 225 book"

"A book that the glossary and timeline in the back are not just an authors conceit,
but a necessary reference guide. MultiReal expands the near-future writing style
into a compelling second novel."

"A brilliant imagining of a near-future that not only extrapolates convincingly from
current technology and culture but fills in the gaps with world building so detailed
as to verge on the tedious.... Others have imagined a future in which nano-
machines have colonized the human body, and indeed every other nook and cranny
of the physical world ... but few have done so as convincingly as Edelman does in
these books. His portrayal of that world is richly evocative.... I've never encountered an SF writer whose focus is so relentlessly on the nuts and bolts of the entrepreneurial world, from the boardroom to the factory to the sales office, and whopontification aside-can make the minutiae of that world seem as exciting and dangerous as a military operation."

"(Grade: A) Readers of this distinctive and well-conceived series are sure to spot
resonances with past classics of the genre.... [Edelman] brings all the intellectual
firepower and verisimilitude of the digerati like Sterling, Stross, and Doctorow to
his text. And the ontological twists and implications of MultiReal would do honor
to Greg Egan. But the strongest overall vibe I get is that of Alfred Bester.... Bester
is much admired verbally, but very few authors really try to emulate him in printhe set the bar so high-and Edelman's success is commensurate with his ambitions.
...Once you realize that Natch is less Neo than he is Steve Jobs, you're in for a
swell ride."

Stargate SG-1: Sacrifice Moon by Julie Fortune
Crazy People: The Crazy for You Stories by Jennifer Crusie
Fabulous Five 027 - The Scapegoat by Betsy Haynes
Blood Trail by Box, C.J.
Family Inheritance by Terri Ann Leidich
They Call Me Crazy by Kelly Stone Gamble
The Enchantress Returns by Colfer, Chris
Laying Claim to the Soul by Trinity Blacio
Cats And Dogs: A Shifter Novella by Georgette St. Clair
The Vendetta Defense by Scottoline, Lisa