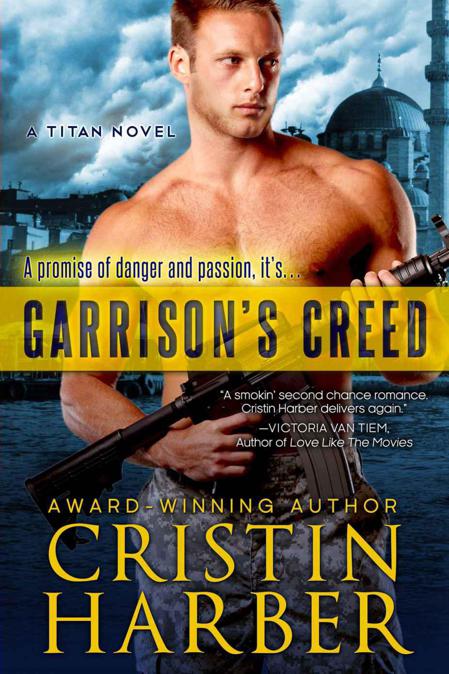 Sighting the target in his crosshairs, Cash Garrison accounted for all of the variables. Wind speed and direction. Distance and range. Now the world would be free of one more bloodthirsty warlord in less time than it would take for the walking dead man to finish his highfalutin champagne toast.

Hours had passed since Cash nestled into place, high-powered rifle held like a baby to his chest. A thousand yards out from the extravagant mansion, he’d burrowed into position, melting into the landscape, and waited for this moment. Antilla Smooth, dressed like the million dollars he made as an arms dealer and unaware of the grim reaper sighting his forehead, made his way past the French doors.

Cash caressed the trigger, knowing exactly how many pounds of pressure it would take to fire the round. He monitored his breaths and heart rate. When his entire body was still, in between beats and respirations, he’d take the bastard out. One less piece of shit strutting on God’s green Earth. The world would be a better place, and Cash’s job for the day would be done. He and the team could find a local bar, find some ladies, celebrate and make a night of it.
Good plan
.

He adjusted for a breeze, blinked his eyes, counted down his breaths, and—stopped. Stunned. Frozen in place. Heart pounding like a coal-eating locomotive.

A woman in a golden dress and sparkled-out jewelry that’d make royalty jealous wrapped her arm around Antilla. A soldier would sell his last bullet for a kiss from her lips. Cash saw her through his scope as though she stood a mere twenty feet in front of him.

His spotter spoke the direction in his earpiece. “Send it.”

Cash spoke into his mic. “Stand by.”

His spotter whispered again. “Eyes on your target. All conditions accounted for. Go. Send it.”

The woman slunk around his bull’s-eye, her beautiful hair piled on top of her head, save for the loose pieces framing her face. Her smile slipped into a laugh.
I’ve inhaled gun oil fumes. I’m losing my mind right this second.

“Cash, man. You there?” His spotter grabbed his attention, wrenching him back to reality.

“Wind from three o’clock. Dropped to five mph. Hold. Target blocked.” The woman draped over the man. This was a nightmare—his nightmare—blasting from the past and slapping him clear off of his prone position and onto his stupefied ass. The spotter spoke again. “Clear. Dial wind right, two mils. Send it… now.”

Now, they had to move. Fast. He knew the spotter team should be slipping through the thick Maine forest. Cash paused and glanced longer than he needed to confirm the kill. Tuxedoed man on the ground. Kill shot. Dead. Panic attacked the room. People ran, most likely screaming. Security scrambled. Dogs loosed. Barks growing closer. But the woman. The golden silk-draped woman stood still, staring at the busted windowpane in the French doors. No expression. No emotion. Not a drop of anything.

Cash shook his head, clearing the ghost of her image, and focused on his job. One shot, one kill. Just the way he liked it. He cleared the shell and casing from his bolt-action rifle, policed his brass, and snapped to a crouch, erasing any evidence that he had spent hours in the spot. A half second later, he beat feet, sliding down the side of the wooded hill, leaving no trail.

His spotter buzzed in his ear, confirming their meet-up point. “Rendezvous at location A, twenty-two ten.” He could do it. He should do it. He powered down a hill, sliding as dirt gave under his feet. Brush slapped him in the face. Vicious barking closed in. The main house illuminated day-glow bright.

Man, he was going to hear about it for this one. He told his spotter, “Location C, twenty-three hundred hours.”

It took a lot for Roman to break protocol and use his name over the radio frequency, but Cash knew his spotter, his closest friend, was pissed. And an upset Roman was as much fun to deal with as the dogs Cash was about to run back toward.

Not much to do except kill an hour. Cash pulled his earpiece out as Roman cursed again. Nothing good would come at the end of that sentence. Cash laughed. Radio silence wasn’t the best road to take, but it was better than coughing up an explanation of the impossible.

Nicola glided around Antilla Smooth. His lifeless face stared at the ceiling, and his perfect hair hid the sniper round’s entry wound. Given the crimson puddle painting the white carpet round the backside of his brain, the bullet was a through and through, and her night was ruined. Her operation ruined, completely FUBAR.

Chaos filled the room, and she was the calm eye of the storm. Everyone and everything swirled around her. Loud noises. Screaming people. Security moved fast, but what was the point? They’d failed.

She hadn’t failed, but the last few months were now crap, and it was time to call the powers that be. They’d be interested in this turn of events. Nicola put down her champagne flute and pulled out her cell. She walked away, feeling her smooth silk gown train trailing behind her.

The phone rang once, and a surprised voice answered. “It’s a little early for our chat.”

“We should get together for ice cream.” Nicola gave the phrase that told Beth, her handler, that this mission was dunzo.

Beth didn’t miss a beat. “I have to run errands first. I’ll meet you after you head to the dry cleaners.”

Dry cleaners. Yup, time to turn into a shadow and slink away.
It was the right move, pulling her home. Too bad she had nothing to show for the months spent playing to the dead megalomaniac’s ego. She’d been so close, only one or two days away from locking down the international players in Antilla’s arms network.

“You’ve got it. I’ll be in and out first thing in the morning.” She walked down the hallway, and a guard looked. Apparently, her saunter was too calm, given the way other women shrieked their horror. “
Ciao
,” she said goodbye, keeping up her Italian persona and putting a hand against her throat.

She looked at her designer gown. No blood. At least there was an upside to this evening’s party. That and she wouldn’t have to feign interest in Antilla, the sick prick, then backpedal when he wanted to take her to bed.

Personal preference. Some ladies in the Agency did what they had to do without a second thought. She’d had second thoughts. And thirds and fourths. She’d wanted to screw Antilla Smooth like she wanted a root canal done by Kermit the freakin’ Frog: choppy marionette hands flopping up and down.

“Gabriella?” Someone used her alias. “Gabriella, are you okay?”

Nicola saw a butler who had been friendly to her since they’d arrived at Antilla’s Maine estate. Her name poured off his lips, imitating the Italian flare she used when introducing herself.

“Yes, fine.
Bene, grazie
.” He looked unassuming. Who knew why the man worked for Smooth Enterprises, but looks were deceiving. Trust no one. “I need to step outside. Fresh air.”

Really, she needed to get out of Maine, but why elaborate? She slipped outside. The night was daybreak bright with the estate’s security system fully engaged. Her hand caught her eye. The fluorescents made her olive skin look green, not complementing the dress she’d fallen in love with. Nicola weighed her lack of options, knowing she’d need transportation and, for the moment, not knowing how she’d secure it.

A chill spiked over her skin as a gust blew through the forest. Someone was still out there. The same someone who took out her mark.

Pop. Flash. Pop. The exterior lights died, and she was left to her thoughts in the moonless night. Another chill rolled over her shoulders. No wind this time. She pivoted, reluctantly ready and willing to ruin her dress and take it out of the ass of whoever was to blame. Her muscles tensed. Her eyes adjusted in a flash. A man. Large. Broad. Armed. Twenty feet away at the side of the patio.

He spoke, the baritone timbre coating her in a hurt she’d hidden years ago. “Nicola.”

She didn’t need to see his face. His voice shattered any semblance of strength she’d mustered. Nicola braced one leg back, prepared to attack. Ready to defend herself. But who was she kidding? If he laid one finger on her, it might be her undoing. All her suffering, pointless.

“Nicola,” he said again. Still as firm, but this time knowing. “What the fuck?”

This was bad news of the worst variety. She pivoted back toward the doors, ready to go back inside and hash out an emergency extraction strategy with Beth. No time to wait for tomorrow’s withdrawal plan.

Reaching for the doorknob, she willed herself not to run.

Sweet Lord, why was Cash here? Why was the one memory she could never forget standing in the middle of her job? And why was he talking to her, armed and looking far more dangerous than the last time she saw him?

“Stop your sweet ass one second, and turn around, Nicola.”

She spun on her stiletto heel, knowing she’d never be able to get to the subcompact gun tucked on the inside of her thigh. Even if she could, she’d never hurt Cash.

“No, sir. You’re mistaken.” She put on her best Italian accent, knowing it wouldn’t fix this problem.

The butler opened the door. “Gabriella, please come in. Everyone’s gathering in the main hall. It’s dangerous to be out here.”

Cash stood in the shadows. She knew the butler couldn’t see him. Yet, her pulse stuttered, and her throat tightened. She wanted to protect one man from the other. Nicola looked over her shoulder, and Cash was gone.

Cash ran through this mind-scrambling scenario as he pushed toward the semi-agreed upon location. He had two more minutes to scoot his caboose there before his spotter had one more thing to bitch at him about. Cash and Roman were tight. One hell of a sniper-spotter team, and best of bros. From boot camp to Titan Group, they’d been by each other’s sides, watching backs, chasing chicks, and fighting in the trenches.

With fifteen seconds to spare, Cash rounded a moss-covered boulder and ran smack into Roman.

“How goes it, dickhead?” Roman scowled. “Your mic not working? Your earpiece burn out?”

A rumble of tires put the pause on their conversation. The armored Range Rover barreled around a tight curve, and they jumped in before it came to a stop. Two doors shut. The driver tore down the road as Cash and Roman righted themselves in the backseat. Cash ignored Roman and waited for the shitstorm he knew was coming.

As if on cue, Roman turned his camo-painted face and stared hard. Cash started to peel off his ghillie suit, unzipping the outfit of fake leaves.