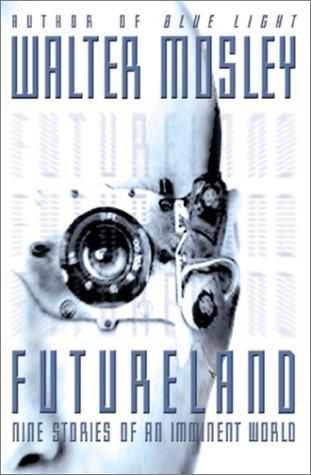 FUTURLAND: Nine Stories of an Imminent

Devil in a Blue Dress

Workin' on the Chain Gang

Whispers in the Dark

The Nig in Me

Whispers in the Dark

"Yeth he did too. Popo called me on the vid hithelf an' he wath on'y two year ole," Misty Bent said to her wide-eyed niece, Hazel Bernard. They were sitting out on the screened porch above the Tickle River. Misty's drooping left eyelid and gnarled, half-paralyzed hands did not mask her excitement.

"Tole me hith mama wath thick on the flo', that he called the hothpital but he wanted me to know too." Misty shook her head, remembering Melba's death. "I beat the ambulanth but Death got there quicker thtill. Doctor Maynard called it a acthidental overdoth tho we could put her in the ground with a prietht and thome prayer beadth, but you know Melba had had all thee could take. You know it hurt me tho bad that the blood vethel broke in my head."

"Her life wasn't no harder than what we all have to go through," Hazel Bernard said. She shifted her girth looking for a comfortable perch in the cheap plastic chair, but there was none.

"But you cain't compare her an' uth, or you'n me for that matter. Ith all diff'rent."

"What's that crazy talk s'posed to mean?" the big woman challenged. Hazel said she dropped by to see how Misty was coming along after the stroke but really she was there to see if Chill Bent, Misty's ex-convict son, had come back to live with her as she had heard.

"What you know 'bout what I'm thinkin'?" Hazel asked. She was thirty years younger than Misty, but she was also the eldest of thirteen. Hazel had been the ruler of the roost since the age of nine, and no old woman's pretending was going to trick her.

"You thinkin' that the tht'oke done methed wit' my mind, that I'm feeble in the head 'cuth my left thide ith parali'ed. You think I cain't take care'a Popo but you wrong."

"I do not think any such thing."

"Oh yeth you do too," Misty said. "That'th why you heah. I know. And you wrong but you done anthered your own queth'ton in bein' wrong."

Hazel shifted again and grunted. This was a day taken away from her housework and her children. She swallowed her anger and asked, "Are you tired, Auntie?"

Little Popo wandered onto the deck then. He was small for thirty months but his movements seemed more like those of an old man lost in memories than those of a child discovering the world.

"What? You don't call him to come sit on your lap?"

Popo went up to the edge of the deck and pressed his face against the loose screen.

The boy rocked back on his heels, his tiny black hands replacing his face upon the screen. He wore a white T-shirt and denim blue jeans with no shoes. His thick hair stood out long and wild but it wasn't matted.

"That's right," Hazel said. "Weatherman said that a storm's gonna come outta the Gulf tonight. You're right, Aunt Misty. He is smart to hear that on ITV and remember it like that."

"No Internet in thith home," Misty proclaimed. "Not even no old TV or radio that work. Thill thay it would meth Popo up."

"Chill? No ITV?" Hazel didn't know which road to hell was worse. Both together tied her tongue.

"I smell it," Popo said, looking at the big visitor in the purple dress. "It smell like the knife an' fo'k when they wet."

The boy climbed up onto Hazel's big thigh and sat like a tiny Buddha staring into her eyes. Beyond him Misty wheezed and doddered, grinning madly.

"He been readin' though," Misty said. "Thometime he read in the paper an' then he try an' fool uth, actin'

Hazel was a little disconcerted by the steady stare of the toddler. She was used to children his age having wandering, slightly amazed eyes. She shifted him to the crook of her left arm and bent over to snag the edge of the newspaper from the dinner tray between her and Misty. Popo giggled at the sudden movement. When Hazel sat back he hugged her big breast.

"Read to me from this," she commanded, handing him the
Thaliaville Sparrow.
Popo took the paper from his aunt and looked at it as if it were some sort of foreign document that he had to study before he could even tell which way it was meant to be read.

Popo shifted the paper around and finally held it sideways.

" 'Jacksonville, Mississippi,' " he said, pronouncing each syllable as if it were its own word, " 'was rewarded yesterday by one of its native sons, Lyle Crandal. Today that son of a carpenter performed a miracle by breaking the four zero second bar-I-er on the four zero zero met-er at the two zero two four Oil-Im-pics.' "

"No," Hazel said on an intake of air.

"This is amazin'," Hazel said to Misty.

"You thee," Misty replied. "You cain't compare yo'thelf to Melba'th mind or mine or hith. I got a blood clot and Melba had the blueth tho bad that thee couldn't breathe right half the time. Popo got thomethin'

in hith head that thmell thun-derthtormth an' read before he potty trained. Tho Melba could die if thee want to and that don't make her leth than you. Ith on'y God can make a judgment. On'y God can thave uth or no."

"No." At the sound of the masculine voice Popo's head jerked around.

Popo jumped out of Hazel's lap, tumbled down her shins and hit the floor. His tiny lips trembled near tears from the fall but his eyes stayed focused on the powerful man in the denim overalls.

"Hey, baby boy," Chill said. He bent over and scooped Popo off the floor with one hand. In his other arm he cradled a colorful box and a big red book. "You got to stay up off'a the flo'. It's dirty down there."

"Sorry," the boy said as he snatched the book from the crook in his uncle's arm.

"My first shimistree set," the boy read out loud.

"It's got all kinds'a experiments you could do with chemicals," Chill said. "They got ones for electricity and computers too."

Popo giggled and bounced on Chill's arm to indicate that he wanted to be put down. Chill leaned over again, allowing Popo to sit in an empty plastic chair. The clear-eyed child was already deep into the words of the book.

"What you mean no?" Hazel said.

"I mean we not sendin' Popo away to some white man's idea of what smart and good is. All they do is wanna turn him against hisself. He's my nephew an' he belongs with his family."

"But you can't help him, Chill," Hazel argued. "He needs computers and tests and teachers smart enough so he cain't fool 'em."

"He ain't gonna fool me," Chill said dismissively. The pale and jagged scar along his black jawline spoke of the violence and rage in the young man's life. "An' the books all say that he just needs to keep his mind busy learnin'. First books and things to keep his hands and mind busy, and then later he can be taught by teaching computers. That's what the experts say."

Chill put the bag down next to his nephew, who was already halfway through the children's chemistry primer.

"Naw. He just read the words. He have to go through it five or six times 'fore he be through with it. It'a be more than a week 'fore he gets through all those experiments."

"And you gonna buy him a chemistry set or whatever every week? Where you gonna get money like that? Do you even have a job?"

"I'm workin' for the catfish farms and doin' some work around here and there."

"That's gonna pay for a boy like Popo's education?"

"I got other plans."

"Prison," Popo said even as he turned a page.

Chill stared at Hazel. He clenched his fists hard enough to make his sinewy forearms tremble.

Popo sat up in his Buddha position and Hazel flinched.

Misty had pulled herself to her feet by holding on to her plastic walker.

"You go," the elder woman replied. "You go and don't meth with uth. Thilly want to do right. Popo jutht lotht hith mama an' he never knew hith daddy. That Johnny Delight wath juth a hit'n run with hith mama. We ain't thendin' him nowhere."

"M Bill Bent?" the white man asked. He was standing at the front door, tam in hand. Chill had been doing push-ups and wore only a pair of sweatpants. His muscular chest was heaving and sweat poured down his face.

"Oh, I see," the small white man said. There was a hint of Mississippi in his voice but in spite of that he spoke like a Northerner. "Well, you see, I'm Andrew Russell from the state board of education. I've come to speak to someone about Ptolemy Bent."

In the background Chill could hear the radio receiver that Popo was experimenting with in his grandmother's room. The high-pitched wavering reminded Chill of the sound effects from the old science fiction movies that they showed on Saturdays at the juvenile delinquent detention center.

"Popo. Is that what you call Ptolemy? We have been informed by various interested parties that the child is exceptional, bright. There's a state law that we must test exceptionally bright children to make sure that they're getting the proper education. You know IQ is our greatest resource." Andrew Russell smiled and nodded a little. He wore the popular andro-suit--green jacket and pants with a loose tan blouse and a brown tam.

"State law is you can't touch 'im till he sixty-one mont's," Chill said.

"But with his guardian's approval we can test as early as twenty-foah," Russell said in what was probably his friendliest tone.

Chill closed the door slowly, controlling his rage. He knew that he couldn't lose his temper, not while Popo was his responsibility.

She was surrounded by colored lights that Ptolemy had wired around the room. Yellow and blue and green and pink paper shades that had been colored with food dyes, lit by forty-watt bulbs. Four-year-old Ptolemy sat at his grandmother's vanity working on six disemboweled antique radios that he had dismantled and rewired. He turned the various knobs, roaming the electronic sighs, momentarily chancing upon talking or music now and then. Six bright green wires connected the radios to an archaic laptop computer on the floor. Waves of color crossed the old-fashioned backlit screen. Now and then an image would rise out of the haze of pixels.

His hair had never been cut but Popo brushed it out as well as he could every morning. In the afternoon Kai Lin would come over and comb out the tangles that Popo missed at the back of his neck. Misty had cranked her Craftmatic bed to the full seated position. She smiled at her little mad scientist while he searched for something, a secret that he wanted to surprise her with.

The boy glanced over at the screen and giggled.

". . . former Soviet Union today gave up its last vestige of sovereignty, much less socialism, when it entered into a partnership with MacroCode Management International in a joint venture to return order to Russian society . . ."

Static came after the song, but the volume rose.

"Popo!" Chill called again, but the static drowned out his words. An almost imperceptible clicking blended in with the white noise. The volume dropped. The clicking became clearer. Popo brought his hands to the sides of his head and pulled both ears.

"Popo," Misty Bent said as loud as she could.

"Thill ith talkin' to you."