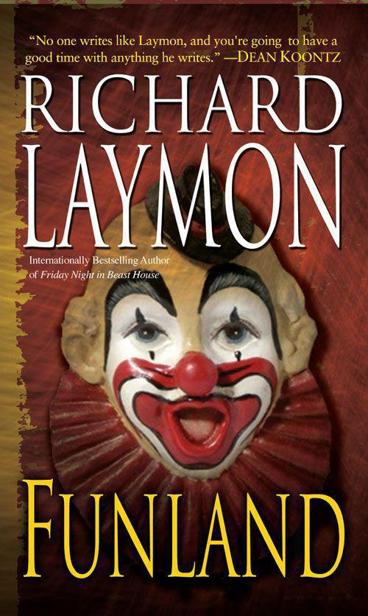 FROM BAD TO WORSE

The thudding footfalls of the troll didn’t seem to be getting closer. She risked a glance over her shoulder. He was about twenty feet back, farther away than he’d been when she bolted from the bench.

But he wasn’t
fast.

He won’t win any track races, Gloria thought. But her terror didn’t subside at all. Not a bit of it.

That’s absurd, she told herself.

What’s the worse that can happen, really?

He rapes and kills me.

A nasty corner of her mind whispered, That isn’t the worst.

She glanced back again. Now the troll was even farther behind.

I’m going to make it! If I don’t trip. If he doesn’t corner me. If there aren’t
others
waiting in the dark places up ahead.

Just ahead, on the right, was the Tilt-a-Whirl. Gloria wondered if she should try for it. What if she had trouble getting over the fence?

No. She didn’t dare.

Keep running, she told herself. Widen your lead.
Then
go for a fence.

Once you’re on the beach…

Light suddenly spilled out of a doorway on the right. It wasn’t at boardwalk level, but at the top of a raised platform.

From Bad To Worse

This book is dedicated to
Ann Laymon and Kelly Ann Laymon,
my wife and daughter,
my traveling companions,
my best friends…with loads of love.

“Trolling” is an actual practice that has occurred in various California communities. Boleta Bay and Funland, however, are ficticious. The characters and events of the story are creations of the author’s imagination.

He came out of the shadows beside the closed arcade and shambled toward Tanya. He looked like something that had crawled out of a grave in a zombie film—face gray under the moonlight, eyes like holes, head tipped sideways, feet shuffling, ragged clothes flapping in the wind.

Tanya halted. She folded her arms across her breasts. In spite of the chill wind blowing in off the ocean, she was warm enough in her sweatsuit. But now her skin started to crawl as if coming alive and shrinking. A belt seemed to be drawing tight across her forehead. She could
feel
the hair standing upright on the nape of her neck, on her arms.

Not a zombie, Tanya knew.

This was a troll.

One of the mad, homeless parasites that preyed on anyone—everyone—who ventured near the boardwalk or the beach. More of them all the time. The filthy, degenerate scum of the earth.

This troll, still a few strides from Tanya, reached out his hand.

She took a quick step backward, suddenly suspected that others might be lurching toward her, and snapped her head around. She saw no one else.

She knew they were watching, though. Trolls. Two, or three, or ten of them. Gazing out from the black rags of shadows near the game booths and rides, from around corners, maybe leering up at her through cracks in the flooring of the boardwalk. Watching, but staying out of sight.

She snapped her head toward the troll.

She could see his eyes now. They looked wet and runny in the moonlight. His teeth were bared in a sly, humble grin. Some in front were missing. The wind wasn’t strong enough to blow away the sour stench of him.

“Okay,” Tanya said. “Sure.” She swung her shoulder bag off her hip. Clutching it to her belly, she opened it and took out her change purse.

“Can y’spare a buck, darlin’?” He bobbed his head, rubbed his whiskery chin. “I ain’t had a bite t’eat in free days.”

“I’ll see what I’ve got,” she said, and snapped open the change purse.

Instead of coins, Tanya plucked a white card from her purse. She jerked it forward and snapped it across the troll’s waiting hand.

He ripped the card and threw it down. The wind flung the pieces aside. “Wanna buck—free, four bucks. C’mon.” He jigged his outstretched hand.
“C’mon!”

Tanya swung the handbag past her hip and behind her, out of the way. She felt its weight against her rump. “What the card said, you illiterate fuck, is ‘Dear Troll, Greetings from Great Big Billy Goat Gruff.’”

Tanya lunged at him. Squealing, he staggered backward. She grabbed the crusty front of his coat, hooked a leg behind him, swept his legs forward, and shoved him down. His back hit the boardwalk. His breath whooshed out as she stomped on his belly. He rolled onto his side and curled up, wheezing.

Tanya dug inside the neck of her sweatshirt. She drew out the whistle, turned away from the writhing troll, and blew a quick blast.

They sprang from their hiding place beside the distant ticket booth and raced toward her: Nate, Samson, Randy, Shiner, Cowboy, Karen, Heather, and Liz.

Watching their charge, she felt a swelling of pride in her chest. She smiled and thrust a fist into the air. All of them pumped fists over their heads. Somebody—had to be Cowboy—let out a whoop.

Tanya turned to the troll. He was crawling, trying to get away. She hurried over to him and pounded down with her shoe, turning his foot, grinding his ankle against the wood. He let out a shriek and flopped. Keeping his foot pinned, she waited. At first she heard only the rush of the wind, the distant heavy sound of combers washing onto the beach. Then came the slap and scuff of the approaching team.

In seconds she and the troll were surrounded.

The troll disappeared under crouched and kneeling bodies.

He gasped and grunted and yelped as blows thumped him.

Turning around, Tanya scanned the boardwalk. She saw nobody. If other trolls were watching, and she was sure they must be—hoped they were—they had no interest in coming to the aid of this one.

Tanya looked down at the troll. Karen had one cuff of his baggy trousers. Heather had the other. They pulled, and the pants shot down his pale, skinny legs.

“Sure puts you to shame,” Liz remarked.

The naked troll, stretched by hands pulling his wrists and ankles, was raised off the boards. He twisted and jerked. He whimpered. He flung his head from side to side. “Lemme be!” he cried. “Lemme be!”

Tanya spread out his coat. Holding her breath, she tossed his shoes and clothing onto it. His shirt and pants felt moist, slick in some places, scabby in others. She gagged once, but went on with her task and wrapped the coat around his other garments. She picked it up. Holding it off to the side, she followed the struggling, spread-eagled troll as he was carried to a lamppost.

Its light—all the lights of Funland—had been extinguished an hour after closing time.

Cowboy slipped a coil of rope off his shoulder. He kept one end. He hurled the rest upward. The coil unwound, rising, and dropped over the wrought-iron arm of the lamppost. The hangman’s noose came down. He grabbed it.

“No!”
the troll cried as Cowboy dangled the noose over his face.
“Blease! I din do nuffin!”

“He din do nuffin,” Liz mimicked.

“Let’s string him up,” Samson said.

“No!”
His head flew from side to side, but Cowboy got the noose around it.

“Gonna stretch your neck,” Cowboy said, leaning over him. “Gonna watch you do the air-jig.”

“Let’s stop wasting time and do it,” Tanya said. Dropping the bundle of clothes, she grabbed the loose end of the rope and pulled the slack out. She strained backward, tugging. The troll squealed. The group let go of him. Tanya saw his legs drop. He swung down, his rump off the boardwalk, his feet pedaling as he tried to get them under him. His sudden weight yanked the rope. Inches of it scorched Tanya’s hands. Then Samson and Heather and Cowboy joined in.

They stopped pulling. “Hold on,” Tanya said. She stepped away, leaving the other three to keep the rope anchored.

The naked troll danced on tiptoes, clutching the noose at his throat.

Tanya walked over to him.

He made sobbing, whining noises. A string of snot hung off his chin, swaying.

The Rising Sun: Episode 6 by J Hawk
Grimoire of the Lamb by Kevin Hearne
Hollow City by Ransom Riggs
Tinker's Justice by J.S. Morin
Forever Scarred by Jackie Williams
Mania by J. R. Johansson
Murder of a Bookstore Babe by Swanson, Denise
Virtually in Love by A. Destiny
Through Her Eyes by Amber Morgan
The Rogue: A Highland Guard Novella (The Highland Guard) by Monica McCarty