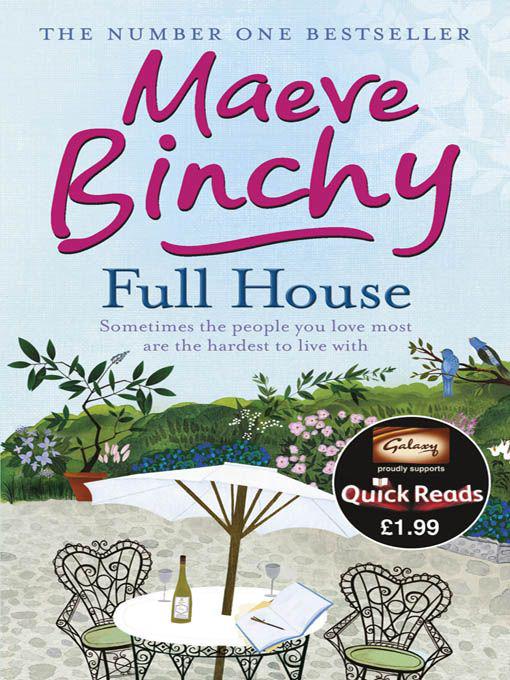 ‘One of the world’s best-loved writers’

‘Make no mistake, there is magic at work’

‘Once you read Maeve you are hooked for life’

‘A Maeve classic, it’ll leave a warm, fuzzy feeling in your tummy’

‘An absolute delight from the most loved of storytellers’

For dearest Gordon, the kindest man on earth.

It had been a long day for Dee Nolan. Up at four in the morning and a quick clear-up of the kitchen, then down to the end of St Jarlath’s Crescent to wait for Josie. Josie had a van and would come by at four-thirty on the dot. The van was full of vacuums and cleaning materials.

From five to seven they cleaned offices. Then they went to apartment blocks and did halls, stairs and landings. Dee liked that, they weren’t messy like the offices that she had to clean. It was only a question of running a Dyson over a smooth thick carpet and wiping the skirting boards.

Josie would sing old music-hall songs to herself, it helped the hours go by. Dee would clean on cheerfully and imagine to herself what it must be like to live or work in the places she cleaned.

Sometimes she knew what it was like to live in such comfort because J.D. Contract Cleaners did work in people’s homes from nine to one o’clock. They had more keys than a jailer, and they found the places in varying degrees of mess. Like that woman Sonia, who was a real tramp. Her clothes were all over the place. They had once found her bra up on the light shade. She always left wet towels in a puddle on the bathroom floor. She seemed to eat food all over the house, there were dirty plates in every room.

Please be sweethearts and take all the dirty sheets and things to the launderette down the road for a service wash. Thank you so much, you are such angels
…

She had never seen them, met them, thanked them, or bought them a Christmas drink. The money was paid by a direct debit from the bank. There must be rich parents somewhere. Some people had it very easy.

Then there was Miss Mason. She cleaned up before the cleaners arrived. They could spend real time polishing up her lovely sideboard until it gleamed, then arranging her glassware on it. Miss Mason was retired and lonely, and she loved the chat as much – if not more than – the cleaning. She knew all about Dee’s husband, Liam, and the three children, Rosie, Anthony and Helen. And she knew all about Josie’s husband, Harry, who played in a band, and the dog Pepper who was the light of Josie’s life.

There were other people they worked for who were almost unknown. There was that one who was on television. People would be very surprised if they knew how many vodka bottles Josie and Dee took from her apartment to the recycling bin …

That was eight hours’ cleaning work a day. And at the minimum wage. It didn’t matter that they had a van and business cards with the name of a company on them. Other people would call to doors and offer their cleaning services at a cheaper rate. Customers were always anxious to get things cheaper, even people who lived in really expensive places.

Dee wondered about that. If she ever had a lot of money, she would be generous, pay people much higher than the minimum wage, encourage them. Or maybe she only thought that now …

At one o’clock Josie and Dee would go to the cut-price supermarket and fill a bag with bargains. Then they would have a bowl of soup and a sandwich in a grand cheap place that they had found. Two small, blonde, cheerful forty-somethings. People would often smile at them and call them over to join a group. But Josie and Dee had no time for such delays. They were both keen to get home. Their day wasn’t nearly over yet. They would just laugh, wave goodbye and climb into the van.

Josie would drop Dee at the end of St Jarlath’s Crescent and then drive back home to walk Pepper round the park. She’d prepare some simple supper that Harry could eat whatever time he returned from whatever his musical career had called him to this time. And Dee would walk down her road to a full house.

They hadn’t intended it to be a full house. Dee and Liam had thought that their children would leave home one by one and come to see them at weekends. It had started out fairly normally: Rosie got married at the age of twenty-two. But now at twenty-five she said the marriage was over, that Ronan was a pig. She was back in St Jarlath’s Crescent, her home that she never should have left.

She shared the bedroom as before with her sister Helen, who was a teacher. Helen had never left home. She was a dreamy girl, full of ideals and hopes. There was nothing that she wasn’t going to do for her pupils.

Anthony had left home for a year when he went around the world like everyone did or should. He was amazed that his mother had never been to Cambodia and his father hadn’t made it to Australia. Anthony was a musician. He wrote his own songs, which he accompanied on his guitar. Hour after hour they heard him at the kitchen table or in his room uploading them on to YouTube. One day, someone somewhere would hear one of his songs. That’s how all the greats were discovered.

She loved them all, who wouldn’t love their three children? But there were times like today when she could have done with coming home to a quiet house. Maybe put her feet up for a while until Liam came in and brought her a mug of tea. There would be no time for anything like that.

Dee Nolan, who had spent eight hours cleaning other people’s places, would have to make a start on her own.

At four-thirty this morning, Dee had glimpsed a big bundle of clothes beside the washing machine. Clean, she thought, so that would mean ironing. She needed to give the fridge a bit of a clear-out before putting in all the low-fat yoghurt that was the Bargain of the Week. She had got a piece of lamb to make an Irish stew, she would have to cut that up and slice the vegetables. That left very little time to put her feet up and have a mug of tea.

She saluted her neighbours as she headed for number sixteen.

Noel and Faith Lynch were at their garden gate. They had recently bought a house in the street just down from Noel’s parents. Their little girl, Frankie, was playing at the railings. Dee wondered whether Frankie would still be living there in twenty years’ time. Would her parents, like so many, never experience the strangeness but the peace of an empty nest?

Dee passed Lizzie Scarlett’s house. Lizzie wasn’t home. She worked day shifts in Ennio’s restaurant, where her granddaughter was engaged to the son of the house, Marco. Dee had known Lizzie forever and, in the years since her husband Muttie died, Lizzie had lived quietly on her own. There would be plenty of time in that household for a feet-up and a mug of tea, Dee thought wistfully. Lizzie’s children were all settled in their own homes and didn’t expect her to run around after them.

In her own house everyone was sitting around the kitchen table. It was covered with dishes. They must have all gathered for lunch. The saucepan might have held pasta, there was a ring of tomato sauce dried on it. It had dripped on to the hob and the burned bits would have to be scraped off.

Dee could see they had eaten the apple tart that she had been planning for the evening meal. There was no milk left. There had been at least a litre there this morning. There was an empty wrapper from a packet of biscuits.

‘How’s everyone?’ she asked brightly through gritted teeth.

‘Well for you, Mam, work finished for the day.’

Rosie must have come home on a late lunch break. She worked in a shopping centre doing free make-ups for clients. She would target women likely to buy the cosmetics and apply foundation, blusher and eye shadow. They got a percentage of what the customers paid for the products. It wasn’t a proper living. They would have to convince a lot of women about the worth of tawny this or shiny that before they could bring home a decent wage.

‘Poor Mam got up very early when we were all asleep,’ Helen said, reaching out to take the last biscuit. Dee saw that the teapot was empty.

‘Teachers have it made,’ Rosie grumbled. ‘Months of holiday every year and home in the middle of the afternoon.’

Anthony had obviously eaten some lunch too; there was an empty plate with a knife and fork on it. As usual, all she could see of Anthony was the top of his head as he bent over his iPod or whatever it was. Dee had seen a lot of Anthony’s head and his hair parting over the past couple of years. She had addressed questions to it and reminded it to put its dirty clothes into the washing machine. She suggested that it might apply itself more frequently to tidying up the garden, or painting the hall door. Always Anthony’s head would nod eagerly in agreement, but his eyes never left the small screen in front of him.

Dee felt very tired. She sat down at the kitchen table. Liam got up to get her some fresh tea. There was something in the way he moved that alarmed her. He was walking very slowly. There was a sense that he was taking every action very seriously, filling the kettle, rinsing the teapot.

She hoped he hadn’t felt sick or anything and left before the working day was over. He had a great job as an electrician for Mash Macken, a small builder. Liam had worked with Mash for nearly twenty years. It was a solid firm, a good job, working with decent people.

She watched his strange, soldier-like movements with increasing concern.

‘Mash let us all go at two o’clock. He’s buying us a drink at seven, so I won’t be in for supper,’ he said.

‘A drink? In the middle of the week?’ Dee was surprised.

‘That’s what he said.’ Liam was tight-lipped.

None of the children seemed to notice that anything was wrong. Rosie was yawning and examining her already flawless face in a magnifying mirror. Helen had her part of the table spread with brochures of Paris: she was planning a school outing. Anthony was concentrating on his texting.

A Scandalous Proposition by George, MM
Manufacturing depression by Gary Greenberg
Empyrion I: The Search for Fierra by Stephen Lawhead
Inevitable: Shifters Forever Worlds (Only After Dark Book 5) by Elle Thorne
Elemental Shadows by Phaedra Weldon
The Mapmaker's Wife by Robert Whitaker
Death Watch by Sally Spencer
Black Boy by Richard Wright
For Kicks by Jenna Bayley-Burke
The Judge's Daughter by Ruth Hamilton