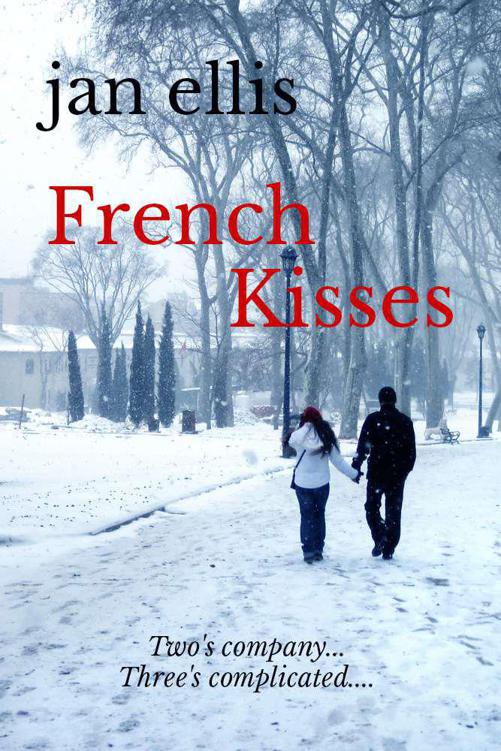 Jan Ellis has asserted her rights under the Copyright, Design and Patents Act, 1988, to be identified as the author of this work.

Chapter 5: At the Picture
Framer’s

Chapter 11: The Morning After

Chapter 12: An Evening with Paul

Extract from
An Unexpected Affair
by Jan Ellis

“It’s just so bloody predictable, that’s what gets me.”

Rachel had the phone clamped uncomfortably against one ear as she stomped up and down the kitchen, unpacking the contents of her shopping bags with fury.

“First he has a mid-life crisis aged 40 and dumps me, and then he goes and gets the poor girl pregnant.”

An aubergine broke loose from her grip and wobbled down the old wooden table to collide with an opened bottle of red wine, fortunately with the cork still in it.

She set the bottle upright again and sat down with a sigh.

“Look Jilly, I’d better go. I’m not up to multi-tasking at the moment. Yup, pop round later and I’ll give you the full story. Ciao, bye.”

Rachel was in the kitchen of the stone house she had renovated with soon-to-be ex-husband Michael more than a decade before. Over the years they had acquired odd bits of furniture
– some of it, like the table, given to them by neighbours when they had first settled in south-eastern France in their twenties.

When Michael started to earn a decent wage from his property business, they could easily have afforded newer, smarter things, but neither of them wanted to change anything about the home that they had painstakingly created together. Rachel liked to think about the generations of children who had hidden themselves in their cupboards and built dens under the heavy French table, just like her two had done when they were younger. It was furniture that was built to survive
– unlike her marriage, she thought as she flung bags of pasta and cereal packets into cupboards.

Fortunately, Michael’s new squeeze
– being a mere slip of a girl – was a fan of chrome and MDF, so there had been no fighting over furniture when Michael had moved out.

When she’d finished unpacking, Rachel made a cup of coffee, grabbed a couple of madeleines and went upstairs to her studio. This was her place of work and her sanctuary. It was here that she worked on the prints of birds, animals and landscapes that she made and sold to local galleries and shops.

It was a warm September day, and from the window she could see the red-tiled roofs of the houses lower down the slope, beyond the edge of the village walls. In the distance, the lumpy tops of the far-off hills were turning sage green and grey as the sun moved around them. Normally the view would inspire her and she would dash down ideas in crayon on the thick creamy paper of her sketch book. Discovering that Michael was about to start a new family had knocked her sideways and she wasn’t feeling the least bit creative.

“Damn the man,” she
muttered to herself. “Paperwork, that’s the answer.” She picked up a folder full of receipts and invoices, but the morning’s encounter had rattled her and she couldn’t even concentrate on basic admin tasks. She turned on the radio, hoping to distract herself, only to find that they were playing what had been ‘their’ tune. Exasperated, Rachel twirled the dial until she reached a talk show and let the chatter wash over her as she dislodged a cat from the chair and sat down with her coffee.

Looking offended, the cat jumped back on to her lap, curled up and went to sleep. Rachel ran her fingers through the amber twirls of his fur and gazed absent-mindedly out of the window.

It had been just over a year since Michael had announced to Rachel that he was leaving her for another woman, if you could call her that. Amelie was in her late-twenties and taught dance at the local arts college. She was skinny, blonde, athletic and altogether annoying.

Eventually Rachel had got used to the idea, and coped with it so long as Michael’s new domestic arrangements were not shoved in her face too often. Unfortunately, he had moved into Amelie’s apartment in the neighbouring town
– Dreste – so they ran into each other with depressing regularity.

Rachel had had a few months of peace because the love birds had gone down to the coast near Nice for the long summer holidays. Michael had texted the kids to say that he would be back soon, but she had been unable to get a specific date from either Alice or Charlie.

The household was running low on supplies of all the heavy, boring stuff so that morning Rachel had decided to pop into Dreste while she was fairly sure that the coast would be clear. As a rule she avoided supermarkets like the plague, preferring to support the shops in Pelette. However, it had got to the point where she needed things like industrial quantities of tinned tomatoes and cat food that she didn’t want to lug up the hill on her bike.

So, there she was, piling washing powder and loo roll into her trolley at the big Auchan store when she glanced up to see Michael and Amelie holding hands by the baby food section. Her stomach sank like a stone because she knew that it could only mean one thing.

The cat on her lap stirred, bringing her back to reality. “She’s welcome to him, eh Fudge?” she said, unwrapping a sweet, fluffy madeleine and sipping the coffee which, she noticed, had gone cold. The tepid liquid gave her a shock. “Get a grip, woman,” she said, standing up and carefully replacing the cat on the warm cushion. “We’ve got work to do.” Slipping an ink-covered apron over her head, Rachel selected a cutting tool and set to work on a new print.

That evening Rachel rehearsed the horrors of the morning with Jilly, a fellow Brit and neighbour. She had worked with Michael for a few years and was annoyingly even-handed when it came to any conflicts between her former colleague and his wife. Jilly had recently married the local garage owner, Thierry, who was besotted with his new wife, who was a few years older than him.

Being naturally kind and sympathetic
and in a soppy state didn’t make her ideal company for a rant about Michael. Rachel’s first choice would have been Margot – a much tougher cookie – but she was out of town, so Jilly got to hear about the supermarket encounter first.

Rachel grabbed a bottle of white wine and some crackers and led the way to the top terrace, by the house.

“So,” said Jilly, once they were settled. “I want to hear all the gory details. You said you ran into them in Auchan?”

“I was in ‘Détergents’ so I tried to hide behind a stack of Toilet Duck, but Michael spotted me.”

“I thought I might get away with it or that the bloody man would just ignore me, but no.” Rachel munched thoughtfully on a cracker. “He actually called my name and waved at me across the store!”

“You can say that again. I was trapped.”

“How awful,” said Jilly, entering into the spirit of things. “He should have done the decent thing and stayed in ‘Bébé et Maman’.”

Rachel nodded furiously.
“You’re right,” she said, topping up their glasses. “But when I pretended not to hear him, the two of them came right over. God, it was awful.”

“What did they say?”

“Well, it was all very civilised. After the usual kissy-kissy greeting, Michael said that they had planned to tell me properly, whatever that means,” Rachel took a swig of wine. “But that ‘they’ were pregnant and so excited, but hadn’t wanted to say anything before the summer hols because it was too early and blah, blah, blah.”

Jilly gave her a sympathetic pat on the hand.

“And Amelie just stood there looking sweet and proud with the teeniest of bumps as if she was the only bloody women he had ever got up the duff.”

Jilly got a misty look in her eyes and opened her mouth to speak, but shut it again when she saw her friend’s fierce expression.

“Don’t you dare say anything
nice
!”

They were both silent for a minute, glancing out at the twilight and listening to the clicks and buzzes of insects in the garden. Although it was nearly autumn, the ground was still warm and busy with life. Rachel had planted jasmine and the sweet scent occasionally wafted over to them.

Eventually Jilly spoke. “It sounds like Michael hasn’t told the kids yet, then?”

Rachel sighed and pulled the cardigan she was wearing tighter around her shoulders. “Nope. And he’d better get his skates on because Junior will be making his appearance in a
couple of months’ time, apparently.”

“How do you think they’ll take it?”

“What, losing a father and gaining a sibling 20 years younger?”

“Better not. Thierry is cooking, so I mustn’t be late.”

Jilly was still quite starry-eyed about her new husband, a trait that Rachel and battle-hardened friends like Margot sometimes found a trifle irritating.

They both stood and Jilly went over to hug her friend.

“Will you be okay? You’re welcome to join us for supper.”

Rachel smiled and shook her head, thinking that she didn’t fancy being the gooseberry that evening. “That’s really sweet of you but I’ve got things to do.”

“Quite sure. Give my love to Thierry.”

Jilly nodded and squeezed her hand. “Of course.”

They walked together to the end of the terrace, then Rachel watched as her friend headed down the path to her adoring husband and his lovingly prepared casserole.

Rachel gathered up the glasses and went back inside. The kids were both out somewhere and there was nothing on TV so she decided to head back to her studio. She didn’t trust herself with a lino-cutting tool after she’d had a glass or two of wine, so instead she pulled out the prints she had finished that week and laid them out on her work bench.

She had promised to deliver a new batch of work to the gallery in Dreste and wanted to select some pieces to have framed. She enjoyed everything about the creative process, including making her own frames when she had the time. She switched on the radio and listened to Euro pop for a while until the incessant chatter got too much and she turned it off.

“How can people bear that twaddle?” she asked the dusty grey cat who lay curled up on a pile of rags. She tutted as she watched it try to pull a streak of vermilion ink off its tail.

“That’s what happens if you insist on sleeping up here, Mousey.”

The cat opened a lazy eye, yawned, turned and went back to sleep.