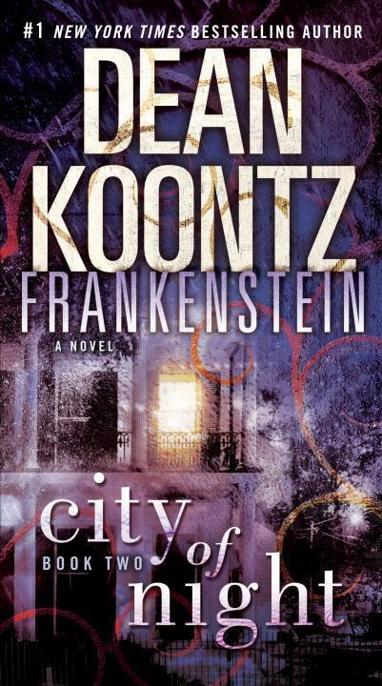 A Division of Random House, Inc.

This is a work of fiction. Names, characters, places, and incidents either are the product of the author's imagination or are used fictitiously. Any resemblance to actual persons, living or dead, events, or locales is entirely coincidental.

Bantam Books and the rooster colophon are registered trademarks of Random House, Inc.

This book contains an excerpt from
Odd Apocalypse
by Dean Koontz. This excerpt has been set for this edition only and may not reflect the final content of the forthcoming edition.

In a sort of ghastly simplicity, we remove the organ and demand the function. We make men without chests and expect of them virtue and enterprise. We laugh at honour and are shocked to find traitors in our midst. We castrate and bid the geldings be fruitful
.

HAVING COME TO LIFE
in a thunderstorm, touched by some strange lightning that animated rather than incinerated, Deucalion had been born on a night of violence.

A Bedlam symphony of his anguished cries, his maker’s shrieks of triumph, the burr and buzz and crackle of arcane machinery echoed off the cold stone walls of the laboratory in the old windmill.

When he woke to the world, Deucalion had been shackled to a table. This was the first indication that he had been created as a slave.

Unlike God, Victor Frankenstein saw no value in giving his creations free will. Like all utopians, he preferred obedience to independent thought.

That night, over two hundred years in the past, had set a theme of madness and violence that characterized Deucalion’s life for years thereafter. Despair had fostered rage. In his rages, he had killed, and savagely.

These many decades later, he had learned self-control. His pain and loneliness had taught him pity, whereafter he learned compassion. He had found his way to hope.

Yet still, on certain nights, without immediate cause, anger overcomes him. For no rational reason, the anger swells into a tidal rage that threatens to sweep him beyond prudence, beyond discretion.

This night in New Orleans, Deucalion walked an alleyway on the perimeter of the French Quarter, in a mood to murder. Shades of gray, of blue, of black were enlivened only by the crimson of his thoughts.

The air was warm, humid, and alive with muffled jazz that the walls of the famous clubs could not entirely contain.

In public, he stayed in shadows and used back streets, because his formidable size made him an object of interest. As did his face.

From the darkness beside a Dumpster, a wrinkled rum-soaked raisin of a man stepped forth. “Peace in Jesus, brother.”

Although that greeting didn’t suggest a mugger on the prowl, Deucalion turned toward the voice with the hope that the stranger would have a knife, a gun. Even in his rage, he needed justification for violence.

The panhandler brandished nothing more dangerous than a dirty upturned palm and searing halitosis. “One dollar’s all I need.”

“You can’t get anything for a dollar,” Deucalion said.

“Bless you if you’re generous, but a dollar’s all I ask.”

Deucalion resisted the urge to seize the extended hand and snap it off at the wrist as though it were a dry stick.

Instead, he turned away, and did not look back even when the panhandler cursed him.

As he was passing the kitchen entrance to a restaurant, that door opened. Two Hispanic men in white pants and T-shirts stepped outside, one offering an open pack of cigarettes to the other.

Deucalion was revealed by the security lamp above the door and by another directly across the alley from the first.

Both men froze at the sight of him. One half of his face appeared normal, even handsome, but an intricate tattoo decorated the other half.

The pattern had been designed and applied by a Tibetan monk skillful with needles. Yet it gave Deucalion a fierce and almost demonic aspect.

This tattoo was in effect a mask meant to distract the eye from consideration of the broken structures under it, damage done by his creator in the distant past.

Caught in the crosslight, Deucalion was sufficiently revealed for the two men to detect, if not understand, the radical geometry under the tattoo. They regarded him less with fear than with solemn respect, as they might stand witness to a spiritual visitation.

He traded light for shadow, that alley for another, his rage escalating to fury.

His huge hands shook, spasmed as if with the need to throttle. He fisted them, jammed them in his coat pockets.

Even on this summer night, in the cloying bayou air, he wore a long black coat. Neither heat nor bitter cold affected him. Nor pain, nor fear.

When he quickened his pace, the commodious coat billowed as if it were a cloak. With a hood, he might have passed for Death himself.

Perhaps murderous compulsion was woven through his very fiber. His flesh was the flesh of numerous criminals, their bodies having been stolen from a prison graveyard immediately following interment.

Of his two hearts, one came from a mad arsonist who burned churches. The other had belonged to a child molester.

Even in a God-made man, the heart can be deceitful and wicked. The heart sometimes rebels against everything that the mind knows and believes.

His gray eyes had been plucked from the body of an executed ax murderer. Occasionally, a soft luminous pulse passed through them, as though the unprecedented storm that birthed him had left behind its lightning.

His brain had once filled the skull of an unknown miscreant. Death had erased all memory of that former life, but perhaps the cerebral circuits remained miswired.

Now his growing fury took him to seedier streets across the river, in Algiers. These darker byways were rank and busy with illegal enterprise.

One shabby block accommodated a whorehouse thinly disguised as a massage and acupuncture clinic; a tattoo parlor; a pornographic video shop; and a raucous Cajun bar. Zydeco music boomed.

In cars parked along the alleyway behind these businesses, pimps socialized while they waited to collect from the girls whom they supplied to the brothel.

Two slicks in Hawaiian shirts and white silk trousers, gliding on roller skates, peddled cocaine cut with powdered Viagra to the whorehouse clientele. They were having a special on Ecstasy and meth.

Deucalion passed among them, noticed by some, not by others. For him, a black coat and blacker shadows could be almost as concealing as a cloak of invisibility.

The mysterious lightning that brought him to life had also conveyed to him an understanding of the quantum structure of the universe, and perhaps something more. Having spent two centuries exploring and gradually applying that knowledge, he could when he wished move through the world with an ease, a grace, a stealth that others found bewildering.

An argument between a biker and a slender young woman at the back door of the whorehouse drew Deucalion as blood in the water draws a shark.

Although dressed to arouse, the girl looked fresh-faced and vulnerable. She might have been sixteen.

Wayne, the biker, held her by both arms, jamming her against the green door. “Once you’re in, there
is
no out.”

Through tears, she said, “I never knew it was gonna be like this.”

“What did you think it
would
be like, you dumb bitch? Richard Gere and
Pretty Woman
?”

“Joyce, honey, they’re all ugly and they all stink. After number fifty, you won’t notice anymore.”

The girl saw Deucalion first, and her widening eyes caused Wayne to turn.

The biker—massive, with a cruel face—was not impressed. “You walk real fast away from here, Lone Ranger, and you might leave with your cojones.”

Deucalion seized his adversary’s right arm and bent it behind his back so suddenly, with such violence, that the shoulder broke with a loud crack. He pitched the big man away from him.

Briefly airborne, Wayne landed face-first, his scream stifled by a mouthful of blacktop.

A hard stomp to the nape of the biker’s neck would have snapped his spine. Remembering torch-bearing mobs with pitchforks in another century, Deucalion restrained himself.

He turned toward the
whoosh
of a swung chain.

Instead of dodging the chain-link whip, Deucalion stepped toward his assailant. The chain lashed around his left arm. He seized it and pulled Redbeard off balance.

The biker had a ponytail. It served as a handle.

Deucalion lifted him, punched him, threw him.

In possession of the chain, he rounded on a third thug, whipped him across the knees.

The struck man cried out and fell. Deucalion helped him off the ground by throat, by crotch, and slammed him into the fourth of the four enforcers.

He rapped their heads against a wall to the bar-band beat, creating much misery and perhaps some remorse.

In rapid succession, the pimpmobiles fired up. No one drove toward Deucalion. They reversed out of the alleyway.

A chopped-and-stretched Cadillac crashed into a yellow Mercedes.

Neither driver stopped to provide the other with the name of his insurance agent.

In a moment, Deucalion and the girl, Joyce, were alone with the disabled bikers, though surely watched from doorways and windows.

In the bar, the zydeco band jammed without faltering. The thick, damp air seemed to shimmer with the music.

Deucalion walked the girl to the corner, where the alleyway met the street. He said nothing, but Joyce needed no encouragement to stay at his side.

Although she went with him, she was clearly afraid. She had good reason to be.

The action in the alley had not diminished his fury. When he was fully self-possessed, his mind was a centuries-old mansion furnished with rich experience, elegant thought, and philosophical reflection. Now, however, it was a many-chambered charnel house dark with blood and cold with the urge to murder.

As they passed under a streetlamp, treading on the fluttering shadows cast by moths above, the girl glanced at him. He was aware that she shuddered.

She seemed as bewildered as she was frightened, as if she had awakened from a bad dream and could not yet distinguish between what might be real and what might be remnants of her nightmare.

In the gloom between streetlamps, when Deucalion put one hand on her shoulder, when they traded shadows for shadows and fading zydeco for louder jazz, her bewilderment increased, and her fear. “What…what just happened? This is the Quarter.”

“At this hour,” he warned, as he walked her across Jackson Square, past the statue of the general, “the Quarter is no safer for you than that alleyway. You have somewhere to go?”

Hugging herself as if the bayou air had taken an arctic chill, she said, “Home.”

“No. Up to Baton Rouge.” She was close to tears. “Home don’t seem boring anymore.”

Envy seasoned Deucalion’s ferocious anger, for he had never had a home. He’d had places where he stayed, but none had truly been a home.

A wild criminal desire to smash the girl raged at the bars of the mental cell in which he strove to keep imprisoned his bestial impulses, to smash her because she could go home in a way that he never could.

She nodded, and unclipped a cell phone from her braided belt.

“You tell your mother and father you’ll be waiting in the cathedral over there,” he said.

He walked her to the church, paused in the street, encouraged her forward, made certain to be gone before she turned to look at him.

The Sentimental Agents in the Volyen Empire by Doris Lessing
Sneaky Pie's Cookbook for Mystery Lovers by Rita Mae Brown
Stacked Up: Worth the Fight Series by Sidney Halston
The Break Free Trilogy (Book 3): Through The Frozen Dawn by Fitch, E.M.
Try (Temptation Series) by Frank, Ella
Together always by Schulze, Dallas
Faerie by Eisha Marjara
Do Not Disturb by Christie Ridgway
One Day by David Nicholls
Rejection: Publishing Murder Mystery (Lou Drake Mysteries) by Thomas K. Matthews