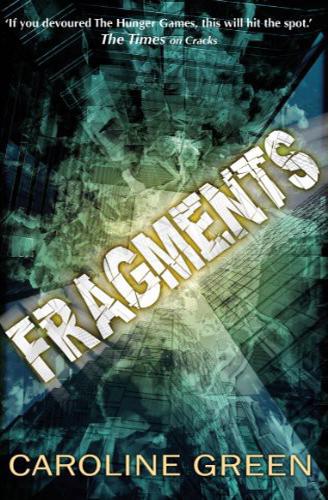 ‘If you devoured
The Hunger Games
this will hit the spot.’
The Times

‘Taut and suspense packed right up to the last page.’
The Financial Times

‘A fast-paced thriller in which nothing is as it seems.’
The Independent

‘A beautifully crafted complex thriller.’
The Independent on Sunday

‘A gripping story, impossible to put down.
Green cranks up the tension with every page.’
L. A. Weatherly, bestselling author of
Angel

‘Full of tension, mystery and real-life drama,
Dark Ride
is not to be missed.’
Chicklish

‘Almost impossible to put down.’
Goodreads

Caroline Green is an experienced freelance journalist who has written stories since she was a little girl. She vividly remembers a family walk when she was ten years old when she was so preoccupied with thoughts of her new ‘series’ that she almost walked into a tree.

Her first novel,
Dark Ride
, was longlisted for the Branford Boase award and won the RoNA Young Adult award.
Cracks
and
Hold Your Breath
have both also received high critical acclaim and fan praise.

Pete, Joe and Harry.
This one’s for you
.

Chapter 13: A Fear of Heights

Chapter 15: Nothing to Worry About, Kyla

Chapter 20: We Don’t Do Things that Way

Chapter 23: Expectations of a Peaceful Day

But it just makes the noise inside my head louder.

I’m sitting halfway up the hill, under the shade of some big old tree, thinking and trying not to. I wish I could switch my brain off. Or forget for even a minute.

Forget that I’ve lost my best friend. My brother. I guess you could say he was my whole family.

When they told me that Jax was dead it was too . . .
huge
to be true. Their mouths were flapping away and this white noise was coming out. How could he be gone? I didn’t believe it. Even now I keep expecting the daft lummox to walk into the room and make one of his crap jokes.

But deep inside, in a raw, dark place, I know that he’s gone. For good.

I bury my face in my arms. The rough bark of the tree scratches me through my top and I press myself a little harder against it. I want it to
hurt
, to distract me from crying again.

I didn’t hear anyone coming.

My head snaps up and I squint into the brightness. All I can make out is a shape haloed by sunlight. My spirits lift the tiniest bit.

Cal sits down next to me and stretches out his long legs.

We kissed earlier. It was nice. Really nice. But now I’m shy again. He clears his throat. Maybe he is too.

‘So how is it?’ I say. I try really hard to sound interested, the way I should be.

He hesitates and I sneak a glance. His eyes are full of happy wonder, as though he’s seeing something too awesome to describe. His cheek kinks, like he’s holding a smile inside.

Weird probably doesn’t even begin to cover it.

About two hours ago, Cal met his parents for the first time in, like, twelve years or something.

He was taken from them as a baby and kept in a government research laboratory called the Facility. They experimented on him and put a chip in his brain. They also did something with brain tissue from a dead boy that meant some of his memories belonged to someone else. I’m fuzzy on the details. It makes me go a bit funny to think about it.

We’ve been staying with resistance people from the rebel group Torch, who want to bring our government, the Securitat, down. They call them ‘terrorists’ on the news but I know the truth. Torch are the good guys in this cruel, messed-up world we live in. They rescued Cal from that place and tried to rescue Jax too, but, well, he wasn’t so lucky.

I glance at the boy next to me. He’s gazing into the distance. I like that we can be still together; it’s good to know he’s there, even if I don’t feel like talking.

But guilt twists inside me when I think about how I’ve kept out of the way today. I didn’t want to see the big, happy reunion scene he had with his mum and dad. Don’t need to be reminded that he now has people to love him and give him a home.

Yeah, I know how that sounds.

What kind of nasty person could resent Cal getting lucky? After everything he went through?

A person like me, that’s who. And don’t think I don’t hate myself for it.

A feeling of total, overwhelming tiredness presses in on me. I wish I could make myself into the tiniest thing that would blow away on the wind, like dandelion fluff.

I picture the scene. Me going down there with a polite, friendly face. They’ll be all, ‘It’s so good to meet you, Kyla,’ and ‘Cal has told us all about you, Kyla.’ And then they’ll go away with him, ready to start their life together. Cal will leave me, just like everyone else has.

God, I really am the worst.

Cal looks at me and reaches over to take my hand in his warm, dry one. Then he leans over and gently presses his lips to mine. ‘Thank you,’ he murmurs and I feel the words as soft breath on my face. For a tiny second, the kiss ignites a weak flame inside me, like I can imagine being happy again, with him. Then it snuffs out. He’ll be gone soon, won’t he?

‘Wait,’ I say and fumble for my phone. He makes a quizzical face as I snap a photo. I shrug, feeling silly now.

‘Help us remember a special day,’ I mumble and force a grin. He grins back before walking down the hill. His hurry to get back shows in every long stride.

Letting the smile drop from my face is a relief, like putting down a heavy bag.

My vision blurs and wobbles and I know I can’t stop the tears. All I’ve done is cry for days but somehow my stupid eyes keep on leaking.

I snuffle and sob for a bit until my chest starts to squeeze and cramp. Fumbling in my trouser pockets again, my fingers close around the breather stick. One of the Torch people at the farmhouse, Sam, is a doctor. She gave it to me for my asthma. I’ve never had anything that good before. I put the small Y-shaped pen to my nose and breathe the sweet drug into my lungs, which instantly start to relax.

I try to get myself together. I promised Cal I’d go meet the parents and I have to do it. But I can’t go looking like this . . .

I rub under my eyes and try to pat my hair down a bit.

There’s a bee somewhere nearby, buzzing away, and I look around. I don’t want to get stung. Those things get infected and you’re in trouble. It might even be one of those super-resistant malaria mozzies I’ve heard about. I squint into the bright sunlight, trying to see where the sound’s coming from. My heartbeat seems too loud in my own ears too.

A cloud passes over my head.

And then icy shock fills my bones.

Three helicopters fly in formation above, black and spiky with weapons, blades thumping a rhythm that vibrates in my chest and head. Buzz drones – evil, bug-like CCTV cameras – swarm around them, darting and dodging but flying in some sort of order. Recording every moment of the flight.

Why are they here? Maybe they’re on their way somewhere else? There’s nothing out here except farms and sheep. I expect them to turn west towards Lancaster.

But they continue in a straight line. The engine sounds dip to a throaty rumble that turns my stomach over with dread.

They’re heading for the farmhouse, the house that everyone said was so safe. Everyone is in there. Julia, Sam and Mo from Torch. Cal. Cal’s mum and dad . . .

I’m on my feet, screaming pointless warnings, but I can’t seem to move. I can’t run down the hill to warn them. I know I’ll die if I do.

All I can do is watch helplessly as the first missile explodes into the roof of the farmhouse. The other two helicopters peel away and blast the outbuildings of the farm. A plume of black and red spouts through the roof and then the whole farm goes up. Shockwaves slam into me and I fall, my face hitting the mud. I feel my cheek rip and taste blood and dirt.

I don’t know how long I’m there, face down in the mud. I drift in and out of the world. After a while, things come into bright, painful focus again. Groaning, I sit up slowly. The side of my face hurts and when I put my fingers there, they come away smeared with blood and mud. Then, with what feels like a superhuman effort, I force myself to turn over and look at the farmhouse.

Except there is no farmhouse now. There’s only a blackened, smoking skeleton of a building. Time hangs around me as though the world has stopped. The air is bitter and smoky, hot and toxic. All I can hear are snapping sounds as flames eat the remains of the building. My throat burns and I bend double, coughing and wheezing.

Everything hurts but it all feels like it’s on the surface. I can’t seem to take in what has happened. I’m sort of numb. Everyone I’ve come to know in these past couple of weeks has been killed in one fell swoop. No one could have survived that blast. Why can’t I feel anything? I should check inside. But I won’t. I haven’t got the courage to go down there and risk seeing burned bodies. Seeing Cal . . .

Reality slams into me then and I’m on my hands and knees, heaving bitterness onto the grass, my stomach cramping and aching with every spasm that passes through me.

I hear someone crying in a weird way, like a mewling cat, and then I realise it’s me. I wish I could make my legs work but all my limbs are like jelly. I feel like one of those puppet things people used to have in old times. I wish someone else would make my strings work because I need to move. I don’t know where to, but I can’t go near the house. I’ve heard they booby trap the remains of places they’ve destroyed, to stop looters. But that’s not why I don’t go. I can’t bear to see the bodies inside.

Doors Open by Ian Rankin
Always Something There to Remind Me by Beth Harbison
The Last Judgment by Craig Parshall
His Outback Cowgirl (Wildflower Ranch Book 4) by Callen, Alissa
Devil's Shore by Bernadette Walsh
Scottish Folk and Fairy Tales from Burns to Buchan (Penguin Classics) by Jarvie, Gordon
Tommy Nightmare (Jenny Pox #2) by JL Bryan
I Can Hear You by Hannah Davenport
Other Lives by Moreno-Garcia, Silvia
Alien Disaster by May, Rob