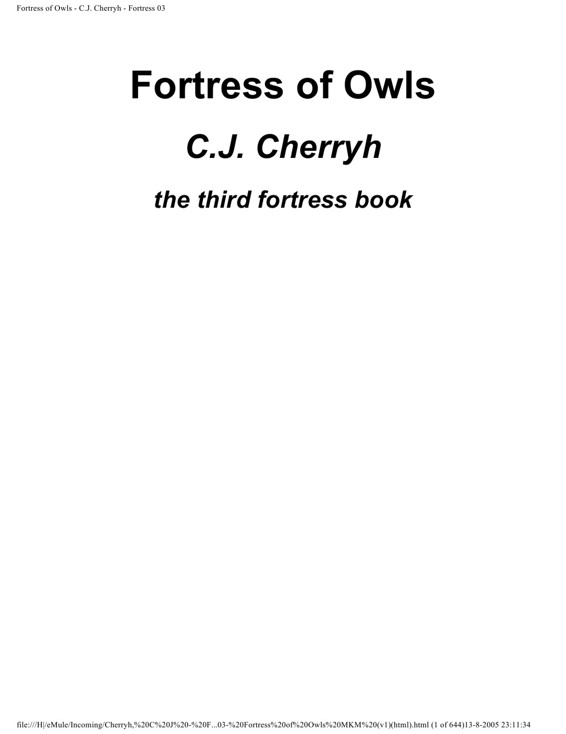 This is a work of fiction. The characters, incidents, and

dialogues are products of the author’s imagination and are

not to be construed as real. Any resemblance to actual

events or persons, living or dead, is entirely coincidental.

1.
Fortress in the Eye of Time

Visit HarperPrism on the World Wide Web at http://www.

To my editor, Caitlin,

whose belief in this story carried it to print—

who patiently read and remarked, version after version—

who compiled the constantly growing lexicon out of all these

They are not now, nor were then, the same.

Nine hundred years in the past, in a tower, in a place called

fear of death. That fear led him from honest study of wizardry

to the darker practice of sorcery.

His teacher in the craft, Mauryl Gestaurien, seeing his student

about to outstrip his knowledge in a forbidden direction,

brought allies from the fabled north-land, allies whose magic

was not taught, but innate. These were the five Sihhë-lords.

In the storm of conflict that followed, not only Hasufin

perished, but also ancient Galasien and all its works. Of all that

city, only the tower in which Mauryl stood survived.

Ynefel, for so later generations named the tower, became a

intact the horrified faces of lost Galasien’s people. The old

tower was Mauryl’s point of power, and so he remained bound

to it through passing centuries, though he sometimes

intervened in the struggles that followed.

The Sihhë took on themselves the task of ruling the southern

but other newcomers, notably the race of Men, who themselves

had crept down from the north. The Sihhë swept across the

land, subduing and building, conquering and changing all that

the Galasieni had made, creating new authorities and powers to

The five true Sihhë lived long, after the nature of their kind,

and they left a thin presence of halfling descendants among

Men before their passing. The kingdom of Men rapidly spread

and populated the lands nearest Ynefel, with that halfling

continued in a life by now drawn thin and long, whether by

wizardry or by nature: he had now outlasted even the long-lived

Sihhë, and watched changes and ominous shifts of power as the

in the line of halfling High Kings.

For of all the old powers, Shadows lingered, and haunted

certain places in the land. And one of them was Hasufin

One day, in the Sihhë capital, within the tributary kingdom of

birth to a stillborn babe. The queen was in mourning—but that

mourning gave way to joy when the babe miraculously drew

breath and lived, warmed, as she thought, by magic and a

To the queen it was a wonderful gift. But that second life was

not the first life. It was not the mother’s innate Sihhë magic,

but darkest sorcery that had brought breath into the child—for

what lived in the babe was a soul neither Sihhë nor Man: it was

Hasufin Heltain, in his second bid for life and power.

Now Hasufin nestled in the heart of the Sihhë aristocracy, still

a child, at a time when Mauryl, who might have known him,

was shut away in his tower in seclusion, rarely venturing as far

as Althalen, for he was finally showing the weakness of the

ages Hasufin had not lived.

Other children of the royal house died mysteriously as that fey,

arts, full of fury and advice, Mauryl came to court to confront

the danger. But the queen would not hear a wizard’s warning,

far less dispose of a son of the house, her favorite, her dearest

and most magical darling, who now and by the deaths of all

elder princes was near the throne.

The day that child should attain his majority, and the hour he

should rule, Mauryl warned them, the house and the dynasty

would perish. But even that plain warning failed to persuade

the queen, and the king took his grieving queen’s side, refusing

Mauryl’s unthinkable demands to delve into the boy’s nature

and destroy their own son.

In desperation and foreseeing ruin, Mauryl turned not to the

halfling Sihhë of the court, but to the Men who served them.

trusted general, and encouraged Selwyn and other Men to

bring down the halfling dynasty and take the throne for

In that fashion Mauryl betrayed the descendants of the very

lords he had raised up to prevent Hasufin’s sorcery.

Hence they called Mauryl both Kingmaker, and Kingsbane.

across the kingdom, Mauryl seized the chance, insinuating both

palace. Then Mauryl and his circle held magic at bay while a

younger wizard, Emuin, killed the sleeping prince in his

chambers—a terrible and bloody deed, and only the first of

in the matter. The fate of the Sihhë in the hands of Selwyn and

his men, even the fate of the wizards who had aided him, was

beyond his reach, and Mauryl again retreated to his tower,

seeking to forget his deed and find some salvation for himself

as a Man and a cleric.

Given this opportunity, Selwyn’s own ambition and Men’s fear

however, though populated with Men, attempted to remain

loyal to the Sihhë-lords, and raised an army to bring against

the Marhanen, but dissent and claims and counterclaims of

kingship within Elwynor precluded that army from ever taking

the field. The Marhanen thus were able to take the entire

tributary kingdom of Amefel, in which the capital of Althalen

had stood, and treat it as a tributary province.

But rather than rule from Althalen, remote from the heart of

his power, and equally claimed by all the lords of Men, Selwyn

Marhanen established a capital in the center of his home

territory, declared himself king, and by cleverness and

ruthlessness set his own allies under his heel, creating them as

barons of a new court.

From the new capital at Guelemara, Selwyn dominated all the

provinces southward. He and his subjects, mostly Guelenfolk

and Ryssandish, were true Men, with no gift for wizardry and

no love of it either, leaning rather to priests of the Quinalt and

Teranthine sects. Selwyn raised a great shrine next his palace,

the Quinaltine, and favored the Quinalt Patriarch, who set a

religious seal on all his acts of domination.

Of all Men loyal to the Sihhë, only the Elwynim held their

border against the Guelenmen… for that border was on the one

hand a broad river, the Lenúalim, and on the other, the

haunted precincts of Marna Wood, near the old tower.

So the matter settled… save only the question of Amefel, the

Selwyn’s hope of holding his lands firm against the Elwynim

river. So holding Amefel was essential.

Now the history of Amefel was this: Amefel had been an

independent kingdom of Men when the first Sihhë-lords walked

up to its walls and demanded entry. The kings of Amefel, the

Aswyddim, had flung open their gates and helped the Sihhë in

their mission to conquer Guelessar, a fact no Guelen and no

Guelen king could quite forget. In return for this treachery, the

local Aswydd house had enjoyed a unique status under the

Sihhë authority, and always styled themselves as kings, as

opposed to High Kings, the title the Sihhë reserved for

Having conquered the province, but fearing utter collapse of

Season for Surrender by Theresa Romain
Forever As One by Jackie Ivie
Vicious Cycle by Terri Blackstock
The Answer Man by Roy Johansen
Thorazine Beach by Bradley Harris
Pretend Married (A Billionaire Love Story) by Nikki Wild
Beautifully Forgotten by L.A. Fiore
Spellbound by Dark, Emmie
The Making of Americans, Being a History of a Family's Progress by Gertrude Stein
Pocahontas by Joseph Bruchac