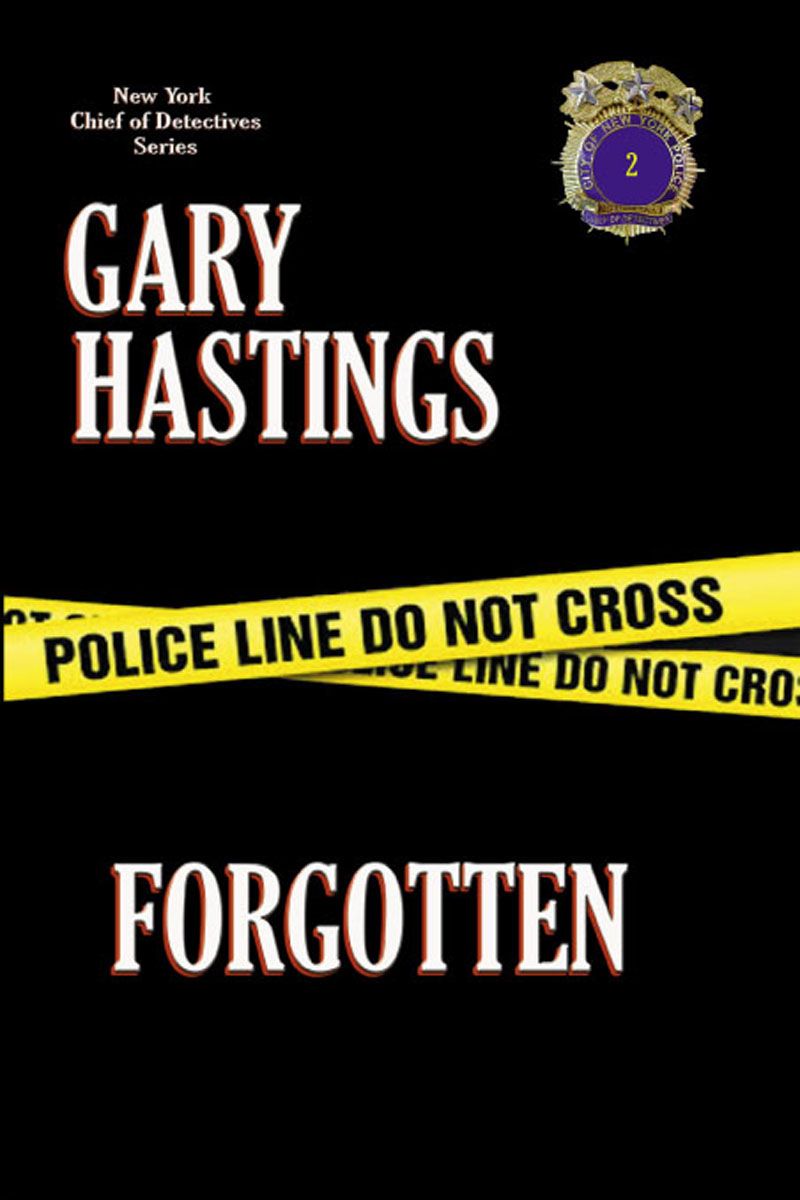 T
his novel is a work of fiction. Names, characters, places, and incidents are either the product of the author’s imagination or are used fictitiously and any resemblance to actual persons, businesses, or events, is coincidental.

All rights reserved. Printed in the United States of America.
No part of this publication may be reproduced, stored, or transmitted in any form or by any means, electronic, mechanical, photocopied, recorded or otherwise without prior written permission from the author.

Writing the New York Chief of Detectives Series has been an intense and a phenomenal experience. It has been rewarding to hear that so many readers have enjoyed the work of Chief of Detectives Pat O’Connor and his hand-picked team of top-notch detectives. The overwhelming reader feedback has been their appreciation for the realism of the story as it relates to real police work, and that makes it all worthwhile.

I would like to express my gratitude to David Shaffer of Alabaster Book Publishing for his hard work and encouragement.

I would like to thank the many readers who have proofed my drafts and made important suggestions. Without their help, this book would not be available.

Thanks to my family for their interest and support of my writing projects and their understanding of the hours necessary to complete a successful book.

I would like to thank the members of the Detective Bureau of the New York City Police Department whose incredible successes inspired this series. I hope you enjoy the continuing New York Chief of Detectives Series with FORGOTTEN!

This book is dedicated to two deeply influential men in my law enforcement career. They were both American heroes of the “Greatest Generation,” who proudly served our nation during World War II and beyond. They instilled in me valuable lessons of leadership, loyalty and character that have served me well for many years. They truly fathered a generation of successful law enforcement officers who passed through the East Carolina University Police Department in Greenville, North Carolina. They should never be forgotten.

“Gone, but not forgotten.”

C
OMPSTAT had survived through several police commissioners since the mid-nineties. Technically, the acronym stood for computer statistics. Others said it stood for comparing statistics. Either way, it was a nerve racking experience for the commanders whose careers were on the chopping block when crime increased in their precincts.

New York City had experienced more than a decade of declining crime, and the COMPSTAT approach had been given much of the credit. In a nutshell, crime statistics were used to judge the effectiveness of a commander at fighting crime. Commanders were expected to respond immediately to crime patterns and stop the trend. Some liked to call it
putting cops on the dots
. It required a tremendous amount of resources and created a challenge for commanders to find the needed manpower. Something always suffered when manpower was pulled. COMPSTAT meetings were held at One Police Plaza, the headquarters of the NYPD, universally referred to by the cops as
One PP
.

Chief of Detectives Patrick O’Connor believed in the principles of COMPSTAT, but struggled with the sometimes lengthy weekly meetings. Pat was a busy man, and his time was valuable. He was relieved when today’s meeting finally adjourned at 1600 hours.

Pat was well-known throughout New York as a
cop’s cop
. He was frequently in the news, and his face was a familiar one to the public, whose trust he had earned. Pat was an imposing figure, with his six-foot stocky frame and his slightly graying hair which conveyed his years of experience and wisdom.

Pat walked back to his office where he was met by his executive assistant, Lieutenant Angela Wilson. Angela was a petite, attractive blond with a law degree and a confident New
York disposition. She was married to Mike Wilson, the Assistant Special Agent in Charge of the FBI in New York.

“There’s a lady here to see you, Chief. She’s been here for over two hours, but refuses to talk to anyone but you.”

“Do you know what she wants?”

“No sir, she just insists on talking to the Chief of Detectives.”

“Give me about 10 minutes, and bring her back.”

“Okay, Chief, would you like me to make some coffee?”

“Sure. That would be great.”

Pat made a brief pit stop and then settled into the chair behind his massive desk. He noticed his
in-tray
was full.

In just a few minutes, Angie Wilson brought the visitor into Pat’s office. The woman, with short grey hair, appeared to be in her early sixties.  She was attractive, well-dressed in a blue business suit, and seemed very self-confident. Pat immediately stood and introduced himself. “Good afternoon. I’m Pat O’Connor, Chief of Detectives.”

The woman reached out and shook his hand.

“I’m Margaret
Butelli. It’s a pleasure to meet you, Chief.”

She hesitated, and Pat sensed that Angie Wilson’s presence was making her nervous.

“Thank you, Chief. That would be nice.”

Sensing the need for privacy, Angie left and returned with two cups of coffee on a tray.

“If you don’t need anything else, please excuse me.”

Pat took a sip of the fresh coffee. It tasted good after the long day.

“My husband was Forrest
Butelli. I’m not sure if you knew him, Chief O’Connor.”

“The name does sound familiar, but I’m not sure of the connection.”

“Forrest was a detective in Mid-Town South until he retired from the NYPD in 1998. He started a very successful private detective agency called Manhattan Investigations.”

“I do remember the name, Mrs.
Butelli.”

“Forrest was found dead in his car in Central Park on Saturday, September 8, 2001. There was a suicide note on the front seat and he was shot in the head.  I’ve never believed for a minute this was a suicide, Chief.”

“I didn’t wait, but nobody would listen. Forrest was buried on September 11. There wasn’t a single police officer at the funeral, because of the terrorist attacks. It was impossible
to get anyone to listen. I met with a captain at the Central Park Precinct who assured me this was a suicide. He said every base had been covered, and the NYPD had done the best it could.”

“How do we know this is not exactly what happened, Mrs.
Butelli? Suicides are tough for any family to accept.”

“Forrest and I have two daughters. They were close to their father. He would never have done this to them. He was supposed to have dinner with all of us the day he was found. We were in the best shape of our lives financially. Between his pension and Manhattan Investigations, things looked good. There would have been no reason for him to do this.”

“Most of what you’ve told me is based on feelings and emotions. I know how difficult it is to believe Forrest killed himself, but we must have some evidence, not just emotion. Do you have any evidence to support your feelings that this might not have been a suicide?”

“I’ve racked my brain and couldn’t come up with anything. I’ve been fixing up my house to sell. I want to move closer to my children, who both live in Virginia now. I found a loose board in the closet of Forrest’s old office and I was
gonna fix it. When I pulled it up, I saw something under the boards. I pulled it out and saw that it was some of Forrest’s files. I started reading them, and my heart just stopped. Many of the entries were made the week Forrest died. I haven’t read all of them, but I read enough to know it probably had something to do with his death. It reinforced my feelings that this was no suicide, Chief O’Connor.”

“What was he working on?”

“I’ll let you read them yourself. Make your own conclusions, and then just do the right thing by my husband. I can’t take much more of this. I have to trust someone, and you’re it.”

“Who else knows about this, Mrs.
Butelli?”

“No one. I didn’t want to give my daughters false hope.”

Margaret Butelli stood up and handed Pat a large accordion file from her briefcase. She offered her hand to Pat. He shook her hand and responded.

“These cases are very difficult for everyone, Mrs.
Butelli. The years that have passed won’t make it any easier. I promise you I’ll have someone look at this case and the new information. If there’s anything in here which changes the dynamic facts of this case, I promise I’ll do the right thing.”

P
at O’Connor had his driver, Detective Dickie Davis, take him home at 1800 hours. All NYPD Chiefs were assigned drivers, and Pat had grown to trust Dickie Davis. As the driver for the Chief of Detectives, he was privy to information regarding the most sensitive investigations and had never betrayed that trust.

Pat lived in a comfortable high-rise apartment in Manhattan. Having no plans for the evening, he had brought along Margaret
Butelli’s big accordion file.

Pat changed into a T-shirt and sweat pants and put some jazz on. He loved jazz and had originally arrived in New York from New Orleans on a jazz trumpet scholarship from the Julliard School of Music. He still played trumpet on occasion and had a soundproof practice room in his apartment. He found music a great way to release some of the stresses of the NYPD.

At 2030 hours, Pat settled down in his study after a light dinner of leftovers from the fridge. He liked having his portable radio on the Manhattan and City-Wide channels and would listen softly as he worked, thinking of it as keeping his finger on the pulse of the city. He also realized most of the other
Super Chiefs
, as the Bureau Chiefs were called, never turned a radio on.

Pulling out the accordion file, Pat was almost immediately impressed with the quality of the writing. It was thorough and professional, which gave it a lot of credibility.

“At 1600 hours on Friday, August 31, 2001, I was contacted by a client who insists on remaining anonymous. The client, an attorney, was concerned about issues of corruption in the Kings County Courts. I agreed to meet with the client on Monday, September 3, 2001, at the office of Manhattan Investigations at 1500 hours.