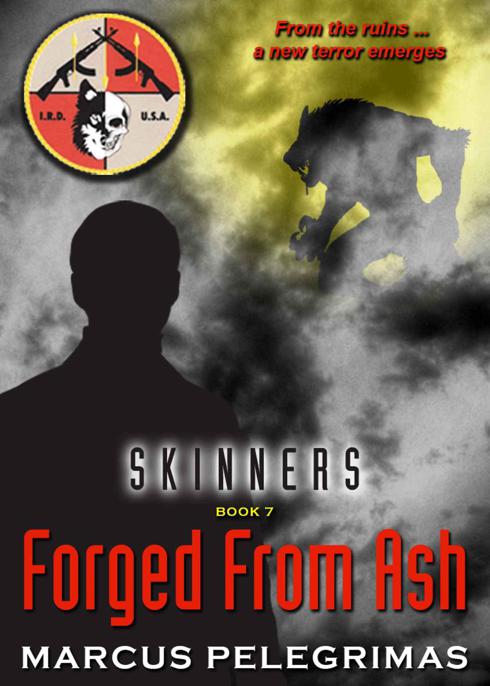 Book Seven of the Skinners Series 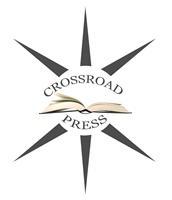 This eBook is licensed for your personal enjoyment only. This eBook may not be re-sold or given away to other people. If you would like to share this book with another person, please purchase an additional copy for each person you share it with. If you’re reading this book and did not purchase it, or it was not purchased for your use only, then you should return to the vendor of your choice and purchase your own copy. Thank you for respecting the hard work of this author. 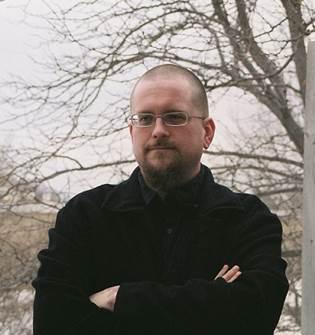 Marcus Pelegrimas graduated from the University of Nebraska with a degree in Criminal Justice as research to become a maniacal super villain. When too many of his plans were thwarted, he went back to his first love: writing. That one worked out much better than the world domination thing. Current interests include monsters, alternate realities, impossible technologies and scrapbooking.

Other Books by Marcus Pelegrimas:

There Are No Atheists in Wormholes (forthcoming)

The Accomplice (written as Marcus Galloway)

The Man from Boot Hill (written as Marcus Galloway)

The Man From Boot Hill

Buried in the Past

No Angels for Outlaws

Visit our
DIGITAL
and
AUDIO
book blogs for updates and news.

Join our group at
Goodreads
.

For Karen.  You're a constant light in an ever-changing storm.

M
ankind loved its prophecies. Their stories, filled with Chosen Ones and riches of shining rocks, told of a dozen different apocalypses. Still, when the end finally came after centuries of ignoring those that would be their destroyers, they never saw it coming.

One of those destroyers was Randolph Standing Bear: a Full Blood, one of the rare species of naturally occurring shapeshifters. They were pure. Never afflicted by a curse or bitten by another damned soul, their gifts were theirs alone and had never belonged to anyone else. After the eldest lords of nature returned to the mists, the Full Bloods rose to take what was rightfully theirs and defended it for countless centuries. If Randolph’s brethren had not been stricken by one last, desperate attack from the Skinners, their agenda would have been carried out. The humans would have been broken down and remade into one of the lower forms of shapeshifter. Through the sheer determination of a few who knew nothing more than to fight until their last breath was spent, the human species was preserved. Even though their world was taken from them and handed back to the shapeshifters, it was an impressive victory that scattered the Full Bloods in every direction.

The wellspring of nature’s most potent essence, the Torva’ox, still flowed but not in its purest form. It had been irrevocably tainted to spread an affliction among humans that was normally only passed along from the bite of the wildest, lowest form of shapeshifter known as Half Breeds. Tens of thousands of humans were infected in an instant. When their bodies were broken and rebuilt, the terrible things they’d become tore bloody swaths through the humans who’d survived the first wave. The next wave came naturally. Bred from the survivors of the first attack, shapeshifter numbers increased exponentially as thousands of crazed animals became millions that fed upon a dwindling number of panicked men, women and children.

In those first months of unbridled carnage, some Full Bloods fought to maintain control of their territory while others asserted themselves to take their rightful places as leaders of the wretched beasts. Randolph Standing Bear had seen this storm coming. Having already made his preparations, he’d found a place to hibernate until it passed.

When a grizzly bear hibernated, it was for a few short months dictated by their environment and instinct. Full Bloods would not be commanded by such simple things. They burrowed deep into ground of their choosing, making caves where there had been none before, and allowed the days to pass without them. Their senses stretched out in every direction, a true extension of their massive, sprawling bodies. They heard every sound and whisper. Deep, luxurious breaths pulled in every scent and savored it like slowly melting chocolate. Their paws scraped lazily against the ground, feeling every tremor of the earth below. And one day, when they decided it was time, they opened their eyes.

For his den, Randolph chose the land of his birth. No matter how many things had changed, the fragrances carried by Scotland’s winds were still familiar and the soil just as soft between his toes. It was an indulgence to rest there instead of somewhere closer to the events unfolding around the world.

That world was a vastly changed place.

Packs of wretches roamed freely, spreading their disease so rapidly that the entire gnarled species could evolve to fit within an environment that shifted even more than the bones beneath their flesh.

Members of other species previously unseen by human eyes came out from hiding, no longer concerned with mankind or its machines.

Randolph emerged from the cave he’d inhabited for the last few years, wearing a body that was part man and part beast. His feet were wide and thin, capped with long toes and claws that were blunted so as not to scrape too loudly against a rocky floor. His legs were longer than a man’s and, like the rest of his body, covered with a layer of coarse hair that wasn’t quite thick enough to be a coat. Hands that hadn’t been needed for much of anything apart from scratching the occasional itch reached up to rub eyes that were all but hidden behind heavy lids.

Randolph’s head was almost pure wolf; larger than that of a canine but perfect in aspect and proportion. His ears flowed back as if pushed by a strong wind. His thick snout was full of long, pointed teeth. Perhaps when the Brothers Grimm had conceived of a thing to blow houses down and eat grandmothers whole, they’d been inspired by something similar to him. As he dropped to all fours, Randolph’s limbs shifted to a uniform length. His torso became leaner in some areas while swelling in others to distribute his weight accordingly. Leaving his den behind like so much fur that had been shed, he ran in an easy, loping stride.

Rich, green land flowed beneath his paws. The air was crisp but far from clean. When he pulled a breath into his lungs, Randolph could taste the scents of fire, ash, a few people and many wretches. The Half Breeds ran rampant. Their stink had soaked into the ground ever since the Torva’ox had spread their disease at the whim of one of Randolph’s own kind. Esteban wasn’t near, but Randolph would have felt if the other Full Blood had been killed. Considering the blow he’d stricken against the Skinners, it was a miracle that Esteban still lived.

Even before he’d decided to sleep, Randolph could tell the hunters were growing powerful. Most of the trouble came from the old and new worlds putting their petty feuds aside for the first time in centuries. The Skinners and Gypsies had discovered common ground, but the rest of the humans were still hesitant to fully embrace their greatest protectors. Perhaps they preferred to cling to more familiar soldiers and firearms. Or perhaps they were frightened at the thought of having to face their fears at arm’s distance instead of firing at them from fifty yards away. Then again, considering the amount of gunpowder Randolph smelled, there was a chance that those guns were becoming more effective than they’d been a few years ago.

Randolph was intrigued by such a prospect. Still, even if their weapons had been upgraded, there were significantly fewer humans remaining to populate all those shattered houses and office buildings. Even after his slumber, the acrid scent of chemicals and atomic fire hung in the air like a stain that no amount of tears or regret could wash away. Having grown desperate, the military had lashed out with their greatest weapon, destroying thousands of wretches in the process. Randolph had witnessed the blinding flash over Toronto mere days before he’d started searching for a place to lay his head. A small number of Full Bloods hadn’t been heard from since those terrible fires had burned the skies. Randolph could only assume they’d been cornered by Skinners or strayed too close to the hellish explosions. Or perhaps they too were merely sleeping until conditions were more favorable.

It took another moment to get his bearings, and when he did, he pointed his nose to the north and ran for several miles. The werewolf covered vast distances with every bounding leap. He was very pleased to see that much of his homeland was mostly unchanged since the days of his youth. The hills were a bit lower in spots after having been worn down by the elements, and some rises were slightly larger thanks to shifting plates beneath the soil. But no part of the Highlands was unfamiliar, and even the cities stank in a way that brought his thoughts back to better days. Randolph thought back to when his tribe had decided where to make their home and set their fires based strictly on which hunting grounds were available to them. In many ways, the Full Blood’s needs hadn’t changed very much since then. His hunting grounds had simply expanded.

The site of his childhood home was nothing more than a flat spot on the ground, easily lost in the blur of scenery flowing past his crystalline blue-gray eyes. Any remains of Randolph’s people were buried elsewhere or scattered upon some distant battlefield. But when he approached the spot where the ground was at its lowest, he could easily recall scents of cooking fires and voices chattering in a tongue long since forgotten. Their stories were no longer told, but the subjects of those tales now roamed the earth in packs or as single travelers reacquainting themselves with the mortal realm.

When he thought of legend, Randolph thought of the Mist Born. They had been drawn from their apathetic slumber by the churning of the Torva’ox. Even those ancient souls who would have been content to feel the ripples of natural powers flow over them weren’t about to ignore the attempts made to poison that tide. The humans had always been known to rail against their environment. Rather than accept their role as lesser inhabitants of the earth, they protested angrily, loudly, and ultimately uselessly. Things had been thrown too far askew, and the Mist Born would not be content to simply sink back down to let them pass.

Penelope Goes to Portsmouth by M. C. Beaton
Dreams of Joy: A Novel by Lisa See
The Duke and The Duchess by Lady Aingealicia
Careful of the Company You Keep by Angie Daniels
Julian (Beautiful Mine #1) by DeLuca, Gia
The Other Side of Blue by Valerie O. Patterson
Almost Too Far (Almost Bad Boys #3) by Peart, A.O.
Black Fridays by Michael Sears
A Strict Seduction by Maria Del Rey
Peaches and Scream (Georgia Peach Mystery, A) by Susan Furlong