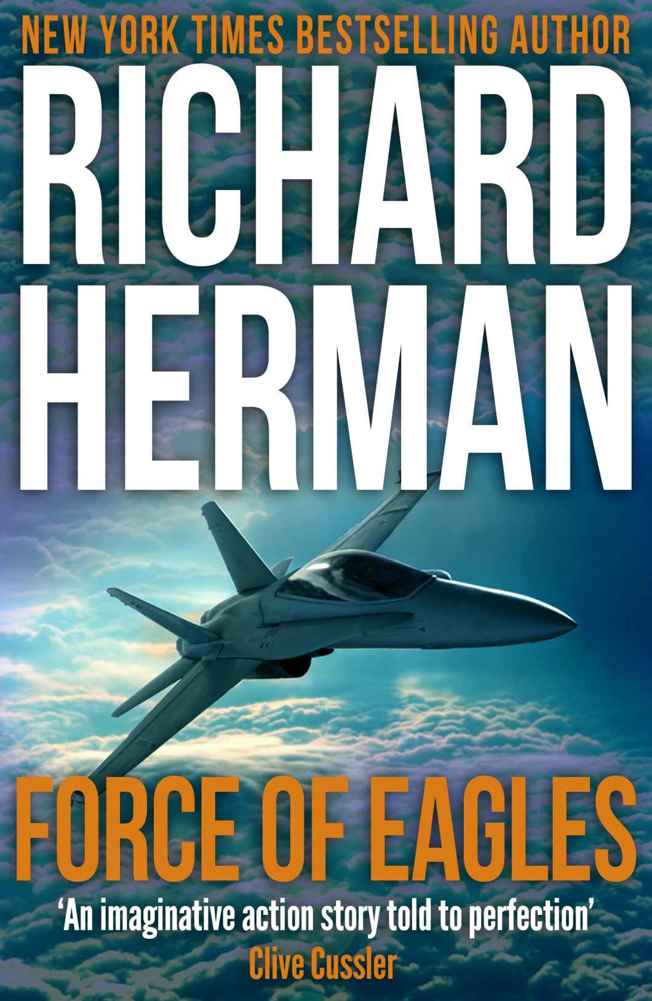 Richard Herman, Jnr has asserted his rights under the Copyright, Design and Patents Act, 2001, to be identified as the author of this work.

First published in the U.K. in 1990 by Hodder and Stoughton Ltd

This edition published in 2014 by Endeavour Press Ltd

For the MIAs, the men who went missing in action in South-east Asia, and whose only homecoming is in the memories and love of those they left behind.

Sergeant Javad Khalian, a Revolutionary Guard commando, kept watching his target, trying to convince himself that he had found the foreigner. He had almost missed the man at first—he did not match the description passed out by the Guards. But as he watched, he became more certain that it was the young American the Council of Guardians was so eagerly seeking. The ten thousand dollars in gold the mullahs were now offering as a reward was ample proof of their eagerness.

Yet he had to be sure, for it meant much to him, maybe even command of a company or battalion in the Revolutionary Guards. Command meant power and prestige and with that, dominance over his so-called equals. Khalian thought of the fools he had to serve with in the Guards—idiots who needed the type of leadership he could give them. But he wasn’t about to be the scorn of many jokes by bringing in the wrong man—again.

The fading light made it difficult to follow the man through the crowded market of Khorramabad, a small town nestled in a pass by the Zagros mountains of western Iran. Khalian paused by a stall the vendor was closing in preparation for evening prayers that would start in a few minutes. He studied his quarry, struck by the man’s appearance, so much like his own. No wonder he had been so difficult to find and capture.

The young Iranian’s ego swelled as he thought about his future. He almost strutted as he followed the American, not wanting to lose sight of him. Still, he had his doubts. Too many suspects had been brought in, only to be released or executed after their identity was established. It did not bother Khalian that innocent men had been hanged in public, left to squirm at the end of a rope or piano wire as they choked to death. He agreed that the executions were necessary if the integrity of the Guards was to be maintained before the public. Khalian cursed the whisper of doubt that kept him from acting—the suspect did move and act like an Iranian. But there was still something wrong, he couldn’t quite pinpoint…the way he moved?…gestures…?

Khalian hurried after him, not wanting to lose his prey in the thinning crowd. He did not see him stop to talk to a fruit seller and almost ran into him. To keep from arousing the man’s suspicions, Khalian walked on past. He quickly blended into the crowd and doubled back, wanting to talk to the vendor.

“The one who just bought some fruit, old man. Tell me, was he a foreigner?”

“No.” The old man’s answer was abrupt, bordering on the edge of hostility. He did not want to talk to the young sergeant with his swagger and bravado that carried none of the politeness and dignity that Allah demanded of the faithful.

Khalian’s ego would not tolerate even the suggestion of an insult. “And tell me, you heap of pig shit, how do you know this?” He made a menacing gesture with his AK-47.

“He spoke and acted as one of the faithful,” the old man said, letting the obvious comparison sink in.

The young Revolutionary Guard wanted to shoot the vendor on the spot, punish him for his insolence, but the noise would only make the American bolt for cover. If he was the American…He would settle with the old fool later, after he had caught the foreigner. His confidence rose as he caught sight of the doomed fugitive, thirty meters away, eating at another stall. He swung his assault rifle down on its sling, letting it hang from his shoulder. By grasping the pistol grip, he let the crowd see him prepare for action. He strode after the American, ready to capture his prize, every inch a soldier of Allah, still not positive that he had the right man but now ready to act, tired of his caution.

Ten meters short of the stall where the American had been eating Khalian lost sight of him. Where had he gone? Then he saw the narrow alley and felt a surge of disappointment that the American had chosen to run for cover, away from an appreciative audience that would have remarked on his bravery and skill in capturing the most wanted man in Iran.

Seeing no one in the alley, he started to run, afraid that he was losing the foreigner. He skidded around a blind corner, seeing nothing in the fading light. The last thing he remembered was a searing line of pain circling his throat, cutting off his scream.

The man twisted the wire garrote, cutting deep into Khalian’s throat. At the same time he guided the twitching body into a soundless slump, making a heap in the shadows. Moving quickly but with no appearance of being rushed, he untwisted the wire from around the Iranian’s neck and wiped it clean on the dead man’s shirt. A quick search turned out the man’s identification papers and money. He arranged the body to look as if he were napping, taking care to hide the AK-47 under the body.

Carefully, he inspected himself, taking time to be sure that no blood had gotten on his clothes. He found two small spots near his left knee. By rubbing in dirt and then scrapping it off with a small but very sharp knife he removed the two spots. Checking to make sure that he was still alone, he walked around the corner into better light. Again he inspected himself for blood. Then he thumbed through the commando’s identification papers, satisfied that they fit him much better than his current set. He walked back to the body and placed his old papers and some of the money in the left-hand pocket of the commando’s shirt, carefully buttoning the flap.

He reached into the shadows and retrieved the shoulder bag he had hidden two hours before. He rummaged in a side pocket and pulled out a note pad and pen. He quickly scribbled a note in Farsi, the Iranian language, “For dishonouring my sister, my family, and spreading corruption on earth.” Then he pried open the corpse’s mouth and shoved the note between its teeth, mumbling in English as he worked, “They won’t have any trouble believing that, you bastard.”

Aware that he was talking to himself in English, he switched to Farsi. “That could be a fatal mistake.” He had been alone too long and was talking to himself out of loneliness. “God, you were thick,” he continued in Farsi, “I thought you’d never take the bait, using my left hand when only you were watching. For a moment, you had me worried.” He chided himself for taking so many chances in order to get the Iranian’s attention and then leading him to the killing ground he had selected. All very necessary he decided, pulling a large plastic bag out of his bag that he had purchased days before in another town.

With some trouble, he shoved the body into the plastic bag, satisfied that he had made a good choice in luring the young commando after him. He tied the bag shut with an overhand knot and carried the body to a hole he had scooped out in a pile of garbage when he hid his shoulder bag. Quickly, he collapsed the hole over the body, calculating that Islamic prohibitions against handling unclean waste might keep the corpse from being discovered until it was well decomposed. Then they would have only his old papers to rely on, and perhaps the note would satisfy the authorities. He hoped, but he doubted it. He shouldered his bag, picked up the AK-47 and walked back to the alley. At least he had bought some time.

A sudden tiredness overcame him as he walked away from the marketplace. Switching from the near-perfect Farsi he had been speaking, he spoke two words in faultless Arabic, “Insh’ Allah.” Then muttering in English, “as God wills.” Especially for what happens to a loose cannon in Iran, by necessity undirected and uncontrolled.

The two compass-gray F-15 Eagles punched out of the top of the broken cloud deck scudding over the Arizona desert. The flight lead’s voice came over the UHF radio, “Fence check.”

His wingman, Colonel Rupert Stansell, did not acknowledge the call as his fingers flicked the switches that would arm the fighter for combat. Without looking, his left hand flashed over the IFF, Identification Friend or Foe, panel just behind the throttles, touching the toggle switches that would turn the four modes on the radar transponder to standby and deny an enemy the capability of interrogating the F-15’s radar beacon. Automatically, he reached forward with his left hand and moved the Master Arm switch up on the armament control panel. “IFF standby. Master Arm on,” he told the instructor pilot riding in the back seat of his D model Eagle. Stansell had simulated the exact actions he would have taken if they had just penetrated into hostile territory.

“Contact, bogies, on the nose at fifty-five miles,” the flight lead, Snake Houserman, radioed. Stansell suppressed a grunt and pressed the center button on the left throttle in an upward motion, increasing the range of his radar display to eighty miles. Two blips flashed on the Vertical Situation Display, the VSD, at fifty miles. He had made a basic mistake—it was hard to see targets at fifty miles using a forty-mile scope.

The Book of Taltos by Steven Brust
American Experiment by James MacGregor Burns
Slippery When Wet: A Novel (Zane Presents) by Cairo
Living in Freefall (Living on the Run Book 1) by Ben Patterson
The Ghost of Christmas Past by Sally Quilford
The Demon Conspiracy by R. L. Gemmill
Alpha Breed: Werewolf Bikers (Sex & Violence Book 1) by Close, Amanda
Crenshaw by Katherine Applegate
The Third Throne: Angel of Darkness by Tabitha Barret
A Promise in Defiance: Romance in the Rockies Book 3 by Heather Blanton