Read For a Roman's Heart Online

For a Roman's Heart 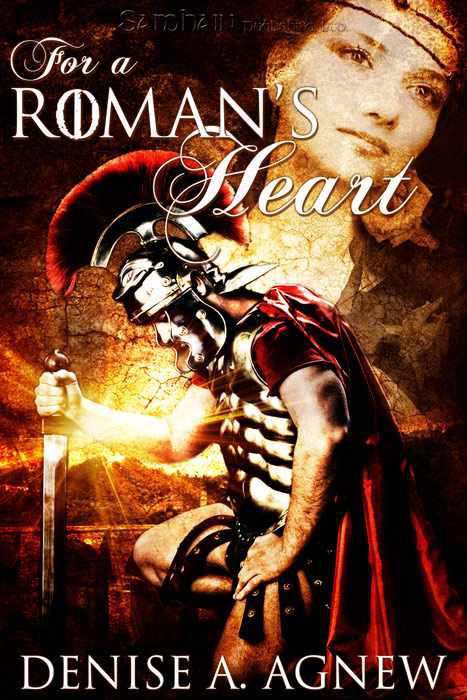 Trapped between cruel parents and the need to hide her gift of second sight from suspicious villagers, Adrenia Tertia Brigomalla walks a line as thin as the threads she weaves. The need for independence burns fierce in her heart, but not as hot as her unexpected attraction to a Roman soldier who comes to the village in search of a deserter.

Though hardened by war, Centurion Terentius Marius Atellus defies any man to harm an innocent. Nothing shakes his relentless determination to track down a murderous legionnaire with a taste for young women. Yet Adrenia’s spirit and vulnerability spark a protective instinct stronger than duty…and temptation that could be his downfall.

Fragile trust built on stolen kisses and a premonition saves his life and drives his offer of the ultimate protection
—
marriage. While she revels in the feral passion he awakens within her, Adrenia would sooner brave the fires of Hades than trade one yoke for another.

eBooks are
not
transferable.

For a Roman’s Heart

For A Roman’s Heart

To the real Terentius, my husband, Terrance Brennan Agnew.

Roman history is a complex and fascinating subject. Long before I started writing
For A Roman’s Heart
, I had an interest in all things Roman, but I hadn’t researched it in any great depth. In the 1990s I was fortunate to live in England for three years, and yet I didn’t take nearly as much time to learn about the archaeology of Roman Britain as I could have. Because I lived near the areas described in this book, I knew the setting for my story would center primarily near those locations. Once I decided to write
For A Roman’s Heart
, I knew the research would take significant time and energy. Researching Roman Britain, though, became a joy. It’s been a wonderful journey, and I’ve learned so much.

Integrity requires that I research the history for my historical novels to the fullest extent, yet I know I’m writing fiction, not a history book. Because of that, I have taken literary license in many places. The fort described at Godmanchester, England—Durovigutum—is loosely based on a fort that has been excavated. Because the fort was long gone by AD 167, this is an area where I’ve altered history. The villa property owned by the character Decimus Caelius Cordus is also a conglomeration of many villas that once existed in England.

From my research on the Roman system of
tria nomina
—three names, I realized that my heroine’s family’s names would confuse the reader. Further research showed me that a variety of naming conventions came and went from Republic times to the time of the Principate, especially with regards to female names. Girls were often named after their father in the feminine form. If there was more than one girl in the family they might be called, for example, Adrenia Major—first born, Adrenia Minor—second born. Because there are several girls in my heroine’s family, she is named as three or Tertia as the third girl born. Since I loved the idea of the hero and heroine eventually calling each other by the first name in an intimate fashion, I also took liberties with history when they call each other Adrenia and Terentius.

I thought it important to mention that women in ancient Rome were considered marriageable by age fourteen. It would not be unusual, therefore, for a woman of fourteen to marry a man far older than her. Married life and sexual relations were very different in those times from ours, although if we had a time capsule there might be more things we’d have in common now with our Roman ancestors than we ever imagined. In researching this history, I was amazed at how much of our modern lives are molded based on many centuries of Roman rule over a large percentage of our Earth.

While Legio II Italica was formed by Marcus Aurelius in AD 165, the battle depicted in my book featuring Legio II Italica is pure fiction. The Marcomannic Wars, called
bellum
Germanicum or
expeditio
Germanica, were a series of wars lasting from AD 166 until AD 180. The Roman Empire fought against the Marcomanni, Quadi and other Germanic people along both sides of the upper and middle Danube. According to some sources, Legio II Italica and Legio III Italica crossed the Alps into Pannonia in AD 168. While the Marcomanni and Victuali Vandals had crossed the Danube into the province, according to Historia Augusta, the imperial army’s approach persuaded the tribes to withdraw.

Ala or Alae: Calvary unit

Ballista or ballistae: Artillery engine firing either stones or arrows

Beneficiarius: Legionaries stationed at various places that may have undertaken police work and perhaps gathered intelligence

Catuvellauni: Tribe of ancient Britain based in the area now known as East Anglia

Centurion or Centurio: Officer rank in command of a century

Cohort: A unit of four hundred to eight hundred men

Deva Victrix Castra Legionis: The Fortress at Deva, home to the Twentieth Legion

First Spear: Nickname for the Primus Pilus, the top centurion of the first cohort

Iceni: Ancient tribe of Britain in what is now known as East Anglia

Impluvium: Rectangular section in an atrium floor or courtyard that collects water

Lancea: A type of javelin

Lararium: Altar in the home where offerings and prayers are made, usually set in the atrium.

Optio: Second in command to a centurion

Primi ordines: Centurions of the first cohort in a legion

Strophium: Bands of cloth tied around the bust

Tunica: Female version of a tunic

Tribunus Laticlavius: Senatorial tribune and second in command of the legion

Via Devana: Roman road leading from Deva and terminating in Durovigutum— Godmanchester—and connecting to an Iron-Age track way called Ridgeway that eventually led to Camulodunum—Colchester

Via Praetoria or Pratoria: Road leading from the most important gate to the
porta praetoria
up to the headquarters building—
principia
—which lay behind the Via Principia

Truth and Consequences by Alison Lurie
Una Discriminacion Universal by Javier Ugarte Perez
The Silver Rose by Rowena May O’Sullivan
Coercion by Tigner, Tim
Wild Craving by Marisa Chenery
Carol (Carol Schmidt Series) by Cook, Lori
Howl by Bark Editors
Princess at Sea by Dawn Cook
River Road by Jayne Ann Krentz
A Journey to the End of the Millennium by A.B. Yehoshua