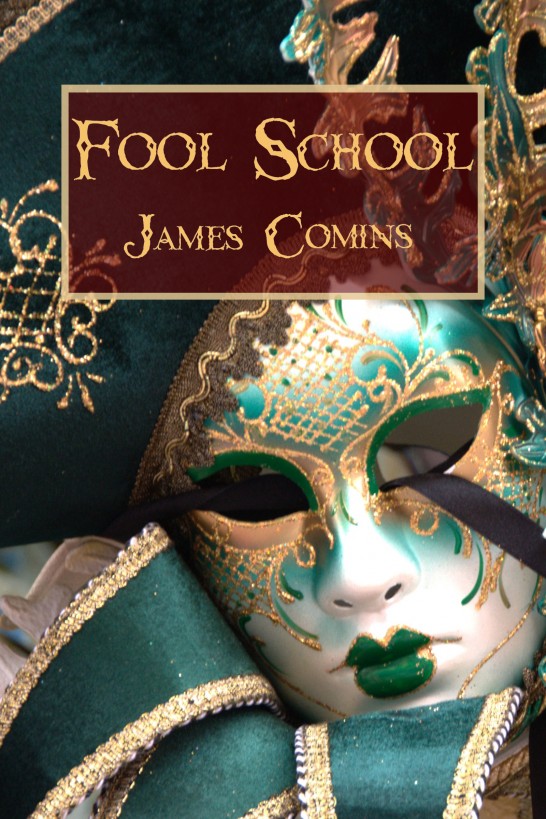 Thank you for downloading this eBook. This book is
the sole property of the author. It may be excerpted or reproduced
for non-commercial purposes. Your support and respect for the
property of this author is appreciated.

This book is a work of fiction. Any resemblance to
persons living or dead, places, events or locales is purely
coincidental. 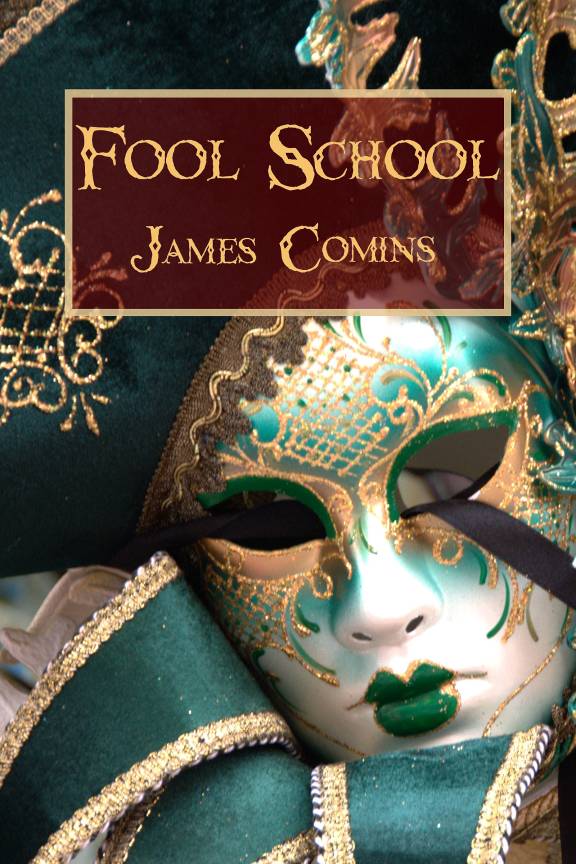 This is me. Tom Barliwine de Motley. I'm not so tall,
a plain boy, brown hair that goes in spirals and a mind that goes
the same way. I wear green and honey-gold, the cloth too long and
patched too often, hose and a long baggy tunic sewn in diamonds,
and on my feet are curly red shoes. Curly red shoes are how you
tell fools from other professions. No one else wears them. They're
meant to look like a man's sword, it's part of the job to be rude.
I know all about rudeness. Devil tongues and pits of hell.

It's the year of our Lord 1040. Henri is king in
France, the Vikings own Britain, and I'm leaving my life forever
for a foreign education.

My destination is Bath, England, where for more than
four hundred years all jongleurs north of Venice have been
educated. Papa went there thirty years ago
,
pépère
seventy, and
grandpépère
more than a century ago. Now it's
my turn.

I'm traveling with Papa. Come with me.

Grapes ripen on grids of staked vines, stems curling
and berries fat. The ocean glisters on my left, and the horse has
taken to sneezing every third trot as it makes its way up the coast
toward Normandy. My papa slugs out of a wineskin, his face
reddening like a sunburn under his large hat. I sit behind him,
clutching his belt, less than thrilled to be on horseback. Large
animals always seem ready to bite me. The horse sneezes again, and
the minature cart with my cases on it hiccups into the air and
lands.

Here, beyond the pear trees, is Cherbourg. We've come
to the end of France. Through coastal warmth we reach the bustling
pier overlooking the English Channel. Seagulls tumble above me in
the early evening, just before sundown, calling for crumbs. Down my
crooked French nose I watch as Papa unloads my two cases from the
cart. They contain thousands of silver
deniers'
worth of
costumes and musical instruments and such. They belonged to my
grandpépère
, who was a kingsfool, the highest appointment of
all jesters. Papa is not a kingsfool. He says he got thrown out of
Paris for remarking on the king's mistress, but old King Philip is
a saint now and can't have had a mistress, or they wouldn't have
let him be one. Papa lies.

Norman water washes beneath the dock. Silver
whitecaps burst between the ferry's low sides and the dock's posts.
The water is the blue of my mother's courtesan eyes.

On the pier beside me my father sways, arguing loudly
with the wharfmaster. Pointing a round ruddy nose into the air,
Papa bellows demands for cheaper passage and flashes fistfuls of
old copper coins. Copper's been worthless for almost a hundred
years now, and papa's are almost all cut to pieces for the metal.
The wharfmaster repeats a demand for real silver, and Papa snorts.
Unsteadily he balances a talonsharp piece of copper coin on the end
of his thumb, flicks it and strikes the wharfmaster on the chin.
Papa laughs like a seal on a rock. My Papa.

The wharfmaster gives me a cold look and grasps my
cheeks between two sudden fingers.

"Tell your father," he hisses, "that you'll get no
passage on my ferry this evening. I've no place on my boat for a
drunkard's son."

And my Papa throws up his lunch onto the pier in a
tidy wine-purple pile, hurls two fistfuls of cut copper coins at me
in an orange blizzard and storms off unsteadily.

Keeping my eyes up, watching the wharfmaster, I stoop
and pick up the few pieslice
quart-deniers
that haven't
slipped through the pier's gaps, sweeping them out of the vomit and
into a stack, wincing as more and more drop into the water.

As the cold eyes of the wharfmaster meet mine, I stop
speaking. I won't pretend I'm not afraid. The big man draws a
finger across his jawline where Papa's coin struck him and a tiny
line of red comes away.

"A scar," the man says, showing me. "I'll have a sad
bit of a scar from that. What have I done to earn myself a scar
today, would you say, boy?"

"A scar for my wasted time. Get gone."

I stand, dumbstruck. My life is unravelling.
Everything is nothing now. Papa's given up, the Fool School waits
across the English Channel, and I have no silver for passage.
There'll be no school without a ferry ride.

Look out over the sea toward the purple horizon with
me. That's where my life should be headed, and I can't get there.
Papa's already made himself scarce, fading into the doorway of some
bar. The quayside at Cherbourg is warm. Small unusual plants like
palmer's fronds grow wild.

I look down at the brown quartered discs in my hand,
trying to burn them with my eyes. I hate them so much and I hate
Papa and I want nothing of him or his poverty in my life. Overcome,
I take a salty breath and throw the coins away, throw them outward
from me with both hands, watch them skip across the water like
stones. They catch the light as they spin beneath the surface, then
disappear, swallowed.

The wharfmaster's eyes follow the old cut coins for a
moment. I feel my cheeks flush hot red, feel pride rise up rudely
behind my eyes. Then I turn and run.

In my secret mind I hope the wharfmaster will run
after me, call out, pick me up and say he forgives me my father's
drunken sins and that he'll take me across to England as an act of
Christian charity and maybe he'll even say that I remind him of a
son of his, one who died as a boy or who left to travel abroad in
search of hope and never returned, maybe he'll tell me that it was
all a mixup and Jean Motley isn't my honest father but stole me
from my cradle at birth, and the wharfmaster will embrace me and
tell me to call
him
Papa now, and he'll teach me the
sailor's and ferryman's trades and I'll grow old working the
ferry--after a few years sailing the coasts of hot jungle lands
abroad, of course, every boy must do that--and--but--but the
wharfmaster is speaking with other men now and has forgotten
me.

I walk the lane, along rolling stacked-stone walls,
keeping to the center cobbles between the cartruts, smelling the
filth of the human city. The odor is cut by cut flowers in sheaves
projecting from the brownbrick buildings. I wonder whether a
handful of silver coins, exact change, will change the harborman's
mind, perhaps I could steal the money, but I'm not optimistic. On
the other hand, maybe the little cut on his chin will heal proper
in a day or two, and I could pay him a full
sou
and he'll
take me and my trunks--

Oh, no. How could I? I turn around on my cloth heel
and run back to the docks at full speed, certain they've been
stolen. I always do this. Life's important things spin away from me
while I dwell on the impossible. I fly down the winding track
streets, kicking up dust, falling more than running, I trip and
rise and run again.

The wharfmaster has my trunks open. With a cobbled
leather toe he pokes through my belongings, appraising them with
his eyes. I imagine a merchant's Moorish al-gebra scrolling through
his mind. Coldly he becomes aware of my presence and shuts the case
with his foot, then changes his mind and opens it again.

"Fine cloth," he says, pointing to my
great-grandfather's tumbler's clothes from the duke's court at
Lyons. The motley is brocaded with real gold wire and trimmed in
royal purple.

If you don't know, there are no more than ten or
twenty rolls of royal purple in the world at a time. In the world.
They're made from seashells that can only be harvested along the
coast of North Afrique and Andalus. The color never fades, it only
grows brighter with time. Only men in the court of a king may wear
royal purple, but my great-grandfather had permission.

"Take it out and hold it up to the light for me," the
harborman says.

I lift my
grandpépère
Jacob Motley's uniform
from its place folded in the trunk and watch it unfold, blazing in
a dozen bright colors against the early sunset. Cloth diamonds in
red and gold, blazing purple trim, thick fine embroidery. Ocean
water slops up--it's high tide--and I hold it higher, above the
froth.

The man lays a hand on the cloth. He pulls out a
small knife and I almost die, I believe he's going to cut up the
golden cloth, but he turns the blade around and presses the pommel
into my hand.

He wants
me
to cut up the golden cloth
instead.

"Take all the stitches out," he tells me.

"I'll be taking the cloth for your passage. I'll not
be needing it as one garment."

I take the knife and sit.

Beautiful cloth, beautiful suit. It's princely, and
it almost fits. None of us are tall in my family, and Papa always
said that I'd grow into Jacob's suit and stay Jacob's size, and
when I was a kingsfool I'd wear it and outshine the king
himself.

I begin shredding stitches, plucking them out like
goosefeathers and throwing the short threads onto the planks beside
me. I tuck the scraps away from the reach of the wind. Can you
believe this is my life? A wiser man would have sold the suit whole
to a haberdasher for a thousand silver
sous
and returned to
the ferryman with two or three of them and called himself rich.

I'm not a wise man. I'm an idiot boy. I'm the son of
a jester who got himself thrown out of Paris for mocking King
Philip for calling himself a saint while he was taking mistresses.
I live in oxcarts and penny-a-barrel-bars. Here I am, shredding my
clothes for a mule of a man. See me. Watch me picking at a duke's
tailor's masterpiece.

And it's over. All are swatches and a pile of
high-end thread. I've destroyed Jacob Motley's suit.

The wharfmaster takes the ball of cloth, removes a
dozen purple scraps that had lately ringed the collar and hem,
removes a few brocaded cloth-of-gold strips, and throws the rest
back to me.

"We leave at dawn, Monsieur Buffoon. Remove your
trunks from my sight."

I drag my remaining belongings away from this
man.

The town is a scattering of churches. They grow like
untended wheat from Cherbourg's back. My destination is the church
of St. Martin, where I know I'll be permitted a piece of floor and
some straw to lie down on. Trying to keep my trunks from dragging
through ruts full of ordure is hopeless, so I choose a few
strategic crossings of the open sewers and once again make my way
up the streets.