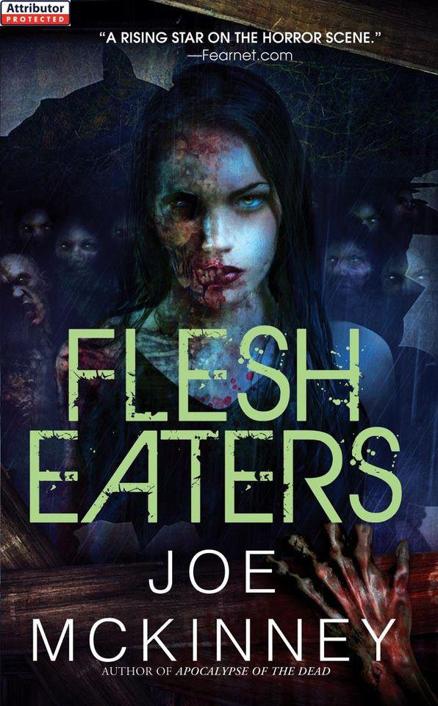 “A rising star on the horror scene!”

“
Dead City
is much more than just another zombie novel. It’s got heart and humanity—a merciless, fast-paced, and genuinely scary read that will leave you absolutely breathless. Highly recommended!”

“Joe McKinney’s
Dead City
is one of those rare books that starts fast and never
ever
lets up. From page one to the stunning climax, this book is a roller-coaster ride of action, violence, and zombie horror. McKinney understands the genre and relies on its strongest conventions while at the same time adding new twists that make this book a thoroughly enjoyable read.”

“The pace never lets up as McKinney takes us through the zombie apocalypse in real time—every second of terror is explored in depth as the world goes to hell.”

“
Dead City
is an absolute must-read for zombie lovers, but McKinney’s excellent storytelling makes it a great read for anyone who loves the thrill of a gruesomely delicious page-turner.”

“
Dead City
is a zombie tour de force—the story moves along at breakneck speed and never lets up. Joe McKinney knows how to toy with readers’ emotions, masterfully capturing the essence of humanity in the face of unspeakable horror.”

—Amy Grech, author of
Apple of
My Eye
and
Blanket of White

“Joe McKinney’s
Dead City
is a tense, thrill-a-page nightmare, written with great passion and authority. Surely one of the best zombie novels ever set down in blood.”

“
Dead City
wastes no time jumping straight into mile-a-minute thrills and gruesome action. This seminal zombie novel culminates in a heart-wrenching finale, and I found that as the undead hordes multiplied, so too did my respect and admiration for author Joe McKinney. If you like your thrillers served with an extra helping of intensity, you’re going to love
Dead City
!”

“
Dead City
is an action-packed, pedal-to-the-metal zombie novel that never loses sight of its humanity. McKinney uses his background as a homicide detective to bring a level of realism to his vision of the apocalypse that is both urgent and frightening. A timely nightmare that you will not put down. I can’t wait to see where this series leads.”

“McKinney writes zombies like he’s been gunning them down all of his life.”

“
Dead City
is a full-throttle page-burner that torques up the terror and does not let up. You’ll want the shotgun seat for this wild ride. Bring a crash helmet.”

“Welcome to Joe McKinney’s
Dead City
universe, a relentless thrill ride where real characters do bloody things on nightmare streets. Break out the popcorn, you’re in for a real treat.”

“
Dead City
is a well-written and compelling first novel. A scary, fast-paced ride, full of hair-raising twists and turns that keep the reader spellbound. Do yourself a favor and snag a copy. . . . Thank me later.”

—Gene O’Neill, author of
Taste of
Tenderloin
and
Deathflash

“A fantastic tale of survival horror that starts with a bang and never lets up.”

This novel takes place in and around Houston, Texas, which is a real place. The Houston in this novel, however, is not. I have treated the city, its environs, and its institutions fictitiously. Any resemblance to actual incidents, or to any person living or dead, is purely coincidental.

Life is the new wealth.

Eleanor Norton’s earliest memories were of hurricanes. As a little girl, she had seen Rita and Ike and Jacob rip Houston apart, their winds shearing off her neighbors’ rooftops and sending them sailing away like kites. She remembered her family huddling like frightened animals in the hall closet, her mother trying to be brave but still squeezing her so tightly she’d left bruises on Eleanor’s skin. Then, in high school, she’d lived through Brendan and Louis, storms that carried shrimp boats ten miles inland and blanketed the city with ocean water that dappled like molten copper in the morning sun. She still carried memories of water moccasins gliding past the top of the swing set in her backyard and pickup trucks floating like rafts down her street and grown men on their rooftops, crying without shame for all that they had lost.

She never outgrew that fear of storms. Even now at thirty-five, a mother of a beautiful twelve-year-old girl, a wife to a wonderful man, a looming hurricane could still reduce her to jelly. The wind and the slashing rain and the overwhelming floodwaters touched some deep atavistic impulse inside her to run for shelter. Cataclysmic storms were a fear many Houstonians lived with, though most never talked about it. But now, as she stood in line at the Wal-Mart, she could sense her own terror mirrored in the scurrying anxiousness of nearly everyone around her. Like her, they just wanted to buy their water and batteries and cans of Sterno and get home to their families before the storm made landfall. Waiting in line like this was maddening.

Eleanor had been doing fine in the days leading up to Hurricane Hector. She was working in the Houston Police Department’s Emergency Operations Command, attending all the briefings, and bringing home what she learned to her family, making sure they were ready. The ritual of getting prepared had helped to keep the fear at bay. But that morning, when she left for work, the sky had been a bloody red, and all the terror she’d felt as a child came back in a flood. She’d gone to work—and tried to work, she really did—but she was distracted and irritable. Captain Mark Shaw, her boss, had noticed. He noticed everything; and, in truth, it hadn’t been hard to tell what was going on with her. She kept returning to the main window, the one that looked out over the green lawns of the University of Houston. Outside the sky was changing from a horror-movie red to a windy, sodden gray, and she couldn’t take her eyes off it.

Captain Shaw, who, despite his reputation, was not without mercy, sent her home.

“You’ll do more good with your family anyway,” he told her. “We got this. Go on home.”

“Really? You’re okay with me leaving?” she asked.

“It’s no big deal. Everything that can be done has already been done. Nothing else to do here but ride it out. You can do that at home just as easily.”

“I really appreciate this, Captain.”

He dismissed her with a wave of his hand.

“I’ll see you in the morning,” he said. “Worse comes to worst, and we get some bad flooding, I’ll send a boat by for you.”

And so she’d gone to Wal-Mart for a few last-minute things, her fear mounting as the wind picked up and the sky grew darker. When she finally made it through the checkout line and walked outside to the parking lot, the gray sky above her was limned with an eerie chemical green. The air was dense as a wet towel against her skin. She swallowed nervously, ducked her head against a gusting breeze, and rushed to her car.

She hardly remembered the drive home.

But once she was home, she and Jim and their daughter Madison still had so much to do to get ready. She could hear Jim with his power drill out on the front porch putting up plywood over the glass, and, looking out the little window above the kitchen sink, she mouthed a silent plea for him to hurry.

It was getting really scary out there.

Part of Bays Bayou ran through the greenbelt behind their house, and Hector’s storm surge had caused its waters to rise significantly. Already there was an inch or so of brackish water covering their lawn, and a sharp, howling wind sent lines of lacy silver waves through it.

They were surrounded by cottonwood and pines and giant oaks, and the same wind was tossing their branches back and forth, filling the air with leaves. Earlier that afternoon Hurricane Hector had been upgraded from a Category Three to a Category Five storm, meaning that it would blow inland with winds over one hundred fifty-five miles per hour; and though she tried to suppress the thought, she kept having visions of a sustained blast of wind breaking off tree limbs and shooting them like arrows through the sides of their home. It had happened before, during Rita and Ike, when she was a little girl.

The Tycoon's Socialite Bride (Entangled Indulgence) by Livesay, Tracey
Island Hearts (Jenny's Turn and Stray Lady) by Grant, Vanessa
3 Gates of the Dead (The 3 Gates of the Dead Series) by Ryan, Jonathan
Daniel by Kathi S. Barton
Shift by Kim Curran
Queen Camilla by Sue Townsend
Gator on the Loose! by Sue Stauffacher
Blame It on Paradise by Crystal Hubbard
Faithfully by Izzy Cullen
The Katyn Order by Douglas W. Jacobson