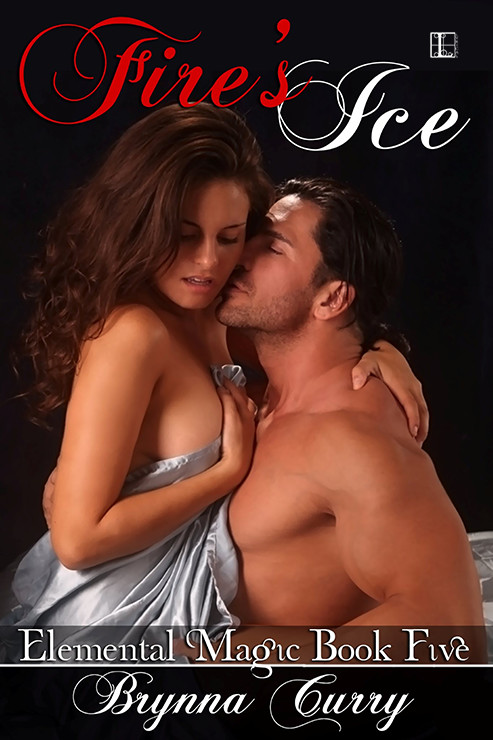 To all those who’ve asked the question
“When will Devin get his happy ending?”

With my eternal gratitude, I dedicate
Fire's Ice
to you
.

As always, thanks to my husband and children. Thanks to Renee and Frank Rocco and everyone behind the scenes at LPI. And last–but never, ever least–thank you, Piper, for picking that rough diamond Earth Enchanted out of the slush pile, polishing it to a shine, believing in Jack and Liv and all those who came after.

A very special thank you to my Anna and Kayla for the names Vaughn and Cian. And to Jennifer Shelton of You Gotta Read Reviews for the name Grayson. The triplets appreciate it, ladies, as do I.

What is magic? Is it wild, wicked spells, a tangible force that can both save and destroy? A stranger’s kindness? Or is it the changing leaves of Fall, the Spring flowers that seem to appear overnight? Perhaps magic is like beauty, forever in the eyes of the beholder, different for everyone.

He used that power to protect those he loved. Exiled from Scotland by his own magic, he lashed out in frustration.

Using his gifts, Devin became a thief to survive, amassing his fortune, but always living by one simple creed. An it harm none.

A thousand years, later he’s turned away from darker pursuits to lead a life of peace, protecting those he loves and considers part of his clan, but there is one woman he can never forget. One who must be given a chance to change, to accept her heart and now his. Over time he’s watched Arianne in the reflections of those ancient stolen gems, felt her calling to him in dreams.

But Ari has a past of her own, secrets she keeps locked up tight for fear of being betrayed again by those she loves. According to Liv’s legend she tried to destroy her sister, but her generosity and kindness tell a much different story.

Come with me to a castle in the Scottish highlands where there is magic in the air, a fire burning in the hearth and a fat black cat named Tessa stretched out on the rug at Devin's feet. We've been waiting for you. Welcome.

Ari placed the sachet she’d been filling with lavender on the old oak table and hurried to open the door. The cottage she shared with her twin Briella was small, just big enough for the two of them. The main room held a large hearth for cooking and preparing medicinal herbs. There were two other rooms for sleeping.

She watched Brie struggle to get through the open doorway with a large man leaning on her small frame. Another stray. Where had she found this one?

Rushing to help her sister, Ari wedged her shoulder under his other arm to take some of the weight off Brie. Dark, delicious power punched into her with the contact. Dizzy with lust for it, her magic began pulling on his of its own accord and scared the hell of her. She was always very carefully controlled–never had her power acted alone.
Faerie
. The demon did not stir. Fear of what he was, what he could make her, made her lash out with venom “Really, sister. You bring home the most interesting creatures. You do realize he is faerie.”

“Arianne! It matters not what he is, just help me get him into my room.”

She felt Brie’s urgency and terror as strongly as the faerie’s power. As a rule, she wasn’t empathic, but today proved different. The man’s body was torn; seawater made his wounds a vicious ache. His suffering became hers. Giving up, Ari knew it would do no good to argue with her sister. Nothing would change. “The villagers will lynch us before nightfall. What has happened with him anyway? His clothes are shredded.”

“As is much of his flesh. Mayhap you should direct your eyes elsewhere, sister.”

“You have no shame. Do you? I think he must have been tossed overboard in a storm or something of the like. I found him washed up on the sand and rocks below the dance. I thought he was dead at first. His heartbeat is faint, weak, but there. I suppose we will have to wait until he wakes to discover the nature of his injuries.”

She managed to avoid breaking most of the urns as they struggled to get their patient into Brie’s room. Turning sideways, they made it through the small doorway and crouched down to angle and shift his shoulders onto the straw mattress where Brie slept. “So you floated him up the cliff, but couldn’t use the air to carry and lift him inside.”

“Normally I would have.”

“Then why waste the energy to carry him? He will probably die anyway.”

Briella turned on her, eyes snapping open with barely contained anger. “Mayhap the next bones I find on the sand will be your own and I might consider your words before stirring the air.”

“Sure and I might be doomed to die on the rocks, sister, but only if you pushed me over the edge first.”

“My craft forbids the like, but oh how there are days I wished I were more like your wicked self.” She paused to lift his feet onto the mattress. “I am weak. I linked with him to save his life. It drains me.”

Wicked, am I?
Ari shook her head. Not that she had the power to sacrifice herself, but she would have never done such a thing. “Little fool. Keep giving so much of yourself and one day there will be nothing left. Then what use will your almighty power be?”

“Why not? Others have died in your care. More may yet. We will be put to death when the elders learn he is here. You risk our lives for a dalliance with the devil?”

“Stop being a child. He will be important to me. I can feel it. Fetch some boiling water. I need to clean his wounds.”

Fetch me some water, Arianne. Do this. Do that
. “I am not your bloody dog to fetch for you on a whim.”

“True. A dog would be obedient and more pleasant to be around. Water. Now!”

“Fine.”
Five minute’s difference and Brie’s power would have been mine. The elders thought she was like our sainted mother, but that was not true. She was kind to others, but treated me like the dirt under her feet. Brie's craft rules her while her hatred destroys me.
“Why do you hate me so, Briella?”

Her sister said nothing in return, only continued to murmur enchantments over the demon in her bed. Briella’s crusade to save him would doom them both. To bring his kind into the village was akin to a death wish. Briella might be spared by the elders, banished perhaps, but she the lesser twin with power so dark she dared not use it would be put to death for the crime.

Ari felt the pain of betrayal slick over her heart like ice.
One day I will show you just how wicked I can be, sister.

A rare snowfall turned the green fields surrounding the dance white. She missed the changing seasons. Warm. Cold. Rainy. Inside the circle, the weather remained in a state of emptiness, no rain, just a constant bubble protecting her from the elements, keeping her hidden from the modern world. Comfortable, but through the barrier she watched the world change year after year. Just once more she wanted to feel the breeze cool on her face. Stand in the middle of a summer shower until it soaked her to the skin… But the price was far too high. She’d been born with power. Why should she just give it away? And for love? Damn Daemon straight to Hell. Love? Daemon’s Fire didn’t love her any more than she did him. Love couldn’t be ruled by magic.

He was very attractive though, like something wild and forbidden. Probably just as dangerous. In her time, others had been betrothed for less, and certainly to worse-looking men. Had things been different, her brother-in-law would have chosen a husband for her. Probably a goat-herder. Not that there was anything wrong with being the wife of a goat-herder; it just wasn’t a life she craved. Neither was wedding a thousand-year-old witch with a cocky attitude. He would come to her, for her. Her bane, her protector. Devin. Just his name whispered from her lips had Daemon’s lust spell working overtime. He’d betrothed her to the laird with that bit of magic, and because of it, Devin’s spell saved her from the backlash of magic. And so she lived endlessly, waiting for love to free her. A love she wanted to feel and might never be given in return.

She watched him climb the rise. Dark mahogany hair whipped with the wind. He moved like a warrior. Stealth. Control. Every step carefully considered, to have the most damaging effect. Only, this wasn’t a battle for land or gold, but for the heart. Devin raised a shield to protect himself.
Is he afraid of me?
Snow melted around his feet with the heat as he stepped into her prison.

Waiting just a few feet away, Ari smoothed the skirt of the long velvet dress she wore. The color of blood, it left her throat and shoulders bare. Feeling her stomach quiver, she tossed her dark curls over one shoulder and met his tawny eyes with her own.
Daemon’s lust spell was powerful and she wanted Devin instantly. “Ah, Daemon’s Fire. My knight in shining armor come to set me free at last.” She walked to him then, let her hips roll with the movement. She knew how to entice a man, even if she was not experienced.

Chivalry be damned. She wanted his hands on her. “And I’m no lady.” Taking a deep breath, Arianne closed the space between them and let her body press close to his heat. She felt him tremble under her touch. Barely leashed passion became a potent mix of devastation, sensation and power. Devin was sexy as hell dressed in all black, adding to his wicked appeal, but she’d prefer seeing him in his clan plaid. Or out of it, for that matter.

Sliding her hands around his neck, she pulled him down to meet her kiss. His mouth turned warm and seeking against hers, taking over. She allowed him to take the kiss deeper, and moaned in triumph. Was it Daemon’s magic compelling her to give herself to him, or genuine lust? His velvet words brushed her ear and decided for her. She wanted more. She wanted all.

Cook's Night Out by Joanne Pence
The Wedding Affair by Leigh Michaels
The Birthday Room by Kevin Henkes
Delete-Man: A Psychological Thriller by Johnny Vineaux
Come To Me by Thompson, LaVerne
Absolute Zero by Chuck Logan
Heather's Gift by Lora Leigh
A Formal Affair by Veronica Chambers
Talson Temptations 2: Talson's Test by Marie Harte
A Quiet Place by Seicho Matsumoto