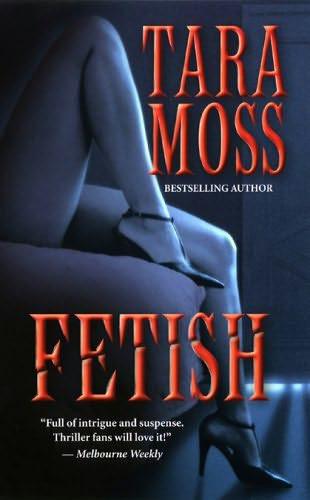 Australian author Moss makes her U.S. debut with a steamy fast-paced romantic thriller, set in the not so glamorous world of international, middle-income fashion modeling. Struggling Canadian model Makedde Vanderwall has come to Sydney, Australia, to visit her friend and fellow model Catherine Gerber. But Catherine doesn't answer her phone, and soon Mak stumbles on her friend's mutilated body. A serial killer known as the "Stiletto Murderer" next targets Mak, who spends the rest of the novel trying to help solve Catherine's murder while avoiding her own. Moss, a former model, writes fluidly, carefully laying out the pieces of the puzzle as she builds to the twist ending.

When the strong and independent Mak becomes so smitten with the handsome detective assigned to the case that she allows her heart to rule her mind and jeopardize the investigation, some readers may cavil. Still, this marks the arrival of a bold new female voice for American crime-fiction fans.
(Dec.)
Copyright © Reed Business Information, a division of Reed Elsevier Inc. All rights reserved.

She wore stilettos—burnished, black and stylish, with thin straps that bit into her pale, slender ankles. Her heels clicked on the winter pavement as she made her way up the street alone. He strained to capture the sound they made, the beguiling music pulling him in like the Pied Piper’s song.

Slowly he drove past, observing the girl through the hungry eyes of a predator. She was young, raven-haired and seductive, wearing a short black skirt to reveal willowy bare legs. A winter jacket fell to her thighs but wasn’t enough to keep her slim legs warm; he could see goose bumps, and the bluish hue of cold, bare skin.

He passed her again minutes later. The street was nearly empty, but still she did not acknowledge his presence. She continued instead on her misguided course, her pretty face set with determination.

The clouds above her were leaden-heavy with the threat of rain. He could see no umbrella. How far would she be willing to walk once the skies began to cry? Surely she didn’t want to get wet. Surely her feet were tired. It was inevitable that she would need him.

Patiently, he watched her remove a map from her heavy shoulder bag. Jet, silken hair fell over her face as she unfolded it and struggled to make sense of the intricate web of streets, roads and lanes. She squinted with concentration, and when the clouds finally opened, showering her with cold droplets, she shot an irritated look at the lowering sky, before scanning the street for shelter. There were no taxis, no telephone booths, no open cafés or corner stores. Nothing for blocks.

The girl set off again, walking faster, aimlessly. Her black bag weighed upon her shoulder, the map scrunched in frustration in her hand. Raindrops made slick, shimmering lines down her soft, hairless legs.

He pulled up beside her.

Now is the time.

“I’m fine,” the girl replied, and glanced nervously up the street. Her accent was foreign, American, or perhaps Canadian.

“Are you sure? This isn’t a safe area for you to be walking alone.” He made a show of checking his watch. “My wife is expecting me home for dinner, but I could spare a few moments to drive you where you need to be.” A gold band shone on his left ring finger. He’d polished it specially for occasions like these.

Her eyes rested on it for an instant. “Oh, no…I’m all right, I think…” Her face was beautiful; youthful and achingly flawless, and her pale complexion was rosy with exertion, radiating warm light like a soft porcelain lamp. “Do you know where Cleveland Street is?” she asked.

“Oh dear. You’re nowhere near Cleveland Street. We’re on Philip now. Here, let me show you on your map.” He beckoned her closer, and she slowly walked over to lean against the passenger side door. He could smell the odour of sweet, young sweat. Her face was glistening, now only a foot from his.

“Here, hop in for a sec’. You’re getting all wet.” He pushed the passenger door open for her.

She stepped back and watched the van door open, uncertainty etched on her face. For a moment she didn’t move, and he wondered if she would accept his help. He smiled harmlessly, not allowing his impatience to betray him. Then, with raindrops rolling down her forehead, the girl shrugged and slid onto his dry passenger seat.

Sheltered from the rain, she looked relieved. She passed him the map, offering a wide, friendly smile that revealed a set of perfect white teeth. She left the passenger door open, with one slender leg stretched down to touch the wet pavement.

He forced his eyes away. “We’re here.” He pointed to the map. “You need Cleveland Street, which is here. You’ve got to walk up this way, then…”

Her scent overwhelmed him; honeyed, wet smells, musky and damp between her legs. He sensed that her heartbeat was slowing. She was relaxing for him, trusting him. He kept talking, explaining in soothing, paternal tones. It looked impossibly far on her map, indeed the distance sounded inconceivable as he spoke.

In reality it would have been a short walk.

Night coated the city with an impenetrable, inky blanket. The clouds had shed their rain and had rolled away, and the sleepy streets glistened with moisture as the van passed quietly over them. With eyes well adjusted to the dark, he drove to a large isolated parking lot, turned off his headlights, and coasted towards his chosen spot under some tall, overhanging figtrees.

His beautiful girl whimpered softly behind him as she had from time to time during their drive
together. He fetched a pair of gloves and put them on. After checking that the driver and passenger doors were both locked, he made his way to her, carefully closing the heavy curtains which separated the cab from the rear of the van. He switched on a battery-powered lamp, blinking for a moment while his eyes adjusted. The thick black blanket had fallen down to the girl’s stomach during the drive. Her arms were still held straight up above her head, wrists secured to shackles on the wall, her body lying flat against the van’s floor. Her thin, pale blue, knitted top was decorated with haphazard splatters of blood; the same treacly blood that glistened around her hairline. A dark mole the size of a lady beetle stood out against her pale neck. With eyes half open and full of salty tears that streaked mascara down her cheeks, she was moaning again, shifting weakly.

Impervious to her weeping and plaintive struggles, he reached for his supplies. He would have to gag her now. She had remained placid since he hit her, but she might become noisy, and even in their isolated spot, he couldn’t risk that. Her eyes followed his movements as he brought the gag close to her face, and widened at the sight of the red rubber ball and its long leather straps. She was becoming lucid. The timing was good. He had long ago lost interest in unconscious victims.

“It’s all right. I won’t hurt you,” he lied. There was no sense in getting her excited until she was fully secured.

He yanked her jaw open with both hands and shoved the rubber ball inside. The girl’s watery eyes became huge saucers of shocked blue and she choked out a stifled protest. He pulled the straps around her head and fastened the buckles at the back, his fingers running through the gummy blood oozing from her crown.

One day he would have his own soundproof room. Oh, how the reactions, the screams excited him. But for now he had to do without that particular luxury.

Gagged and bound, the girl began struggling with surprising strength; swiftly he straddled her and punched her square in the jaw with one gloved fist. Her eyes snapped shut and she let out a muffled cry, the tears coming harder. Her body convulsed with sobs, and he felt himself become more fully aroused. He ripped the blanket off her—diminutive breasts jiggled under her thin top, her miniskirt was riding up around her hips, but the black stilettos were in place on the girl’s dainty feet.

He moved down her body and removed her right shoe.
Lovely. Perfect
. Her toes were smooth and delicately formed; he was very pleased. He slipped the stiletto back on, enjoying the look of it more
knowing what perfect digits it housed. He reached for his blade and moved back up his latest possession. She was bleeding but conscious, blue eyes open again and rolling wildly with panic. With one long, graceful movement he sliced through her flimsy top, splitting it open from waist to neck. She wore a plain, cream-coloured bra. He cut through the centre clasp and it snapped open, leaving her pale chest exposed. He cut through her skirt and cotton panties, and placed them in a neat pile with her other clothing.

She was naked for him.

Immune to her stifled pleading and now desperate flood of tears, he continued.

At daybreak, the man decided it was time to leave the parking lot. Although he hadn’t slept a single wink, he wasn’t tired. Sitting beside the girl’s silent body, he felt calm and powerful. Curious, he looked through the girl’s things before disposing of them. He opened the large black bag she had been carrying and found a heavy, ten-by-twelve-inch book—a model’s portfolio. He flipped through it. The photos inside showed the girl in several benign poses; smiling, walking, or standing. Boring. He also found a wallet with a Canadian passport, an address book and a crinkled letter addressed to a “Catherine Gerber”. He unfolded the letter and read:

Love and Larceny by Regina Scott
A Disguise to Die For by Diane Vallere
Ground Zero: Prequel to Numbered Series by Tor, Magus
Love's Way by Joan Smith
The Two Towers by Jamie A. Waters
Wizard Dawning (The Battle Wizard Saga, No. 1) by Lance, C. M.
Blackbirds by Garry Ryan
Just Roll With It: a Just Us novel by Niki Hager
Crushed (Breaking the Rules Series Book 5) by Webster, K
Della: Bride of Texas (American Mail-Order Bride 28) by Trinity Ford