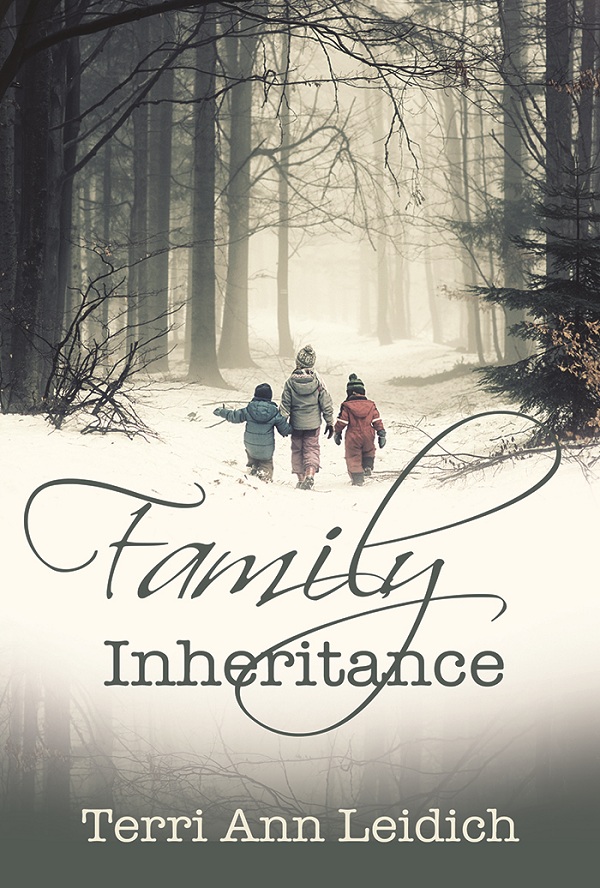 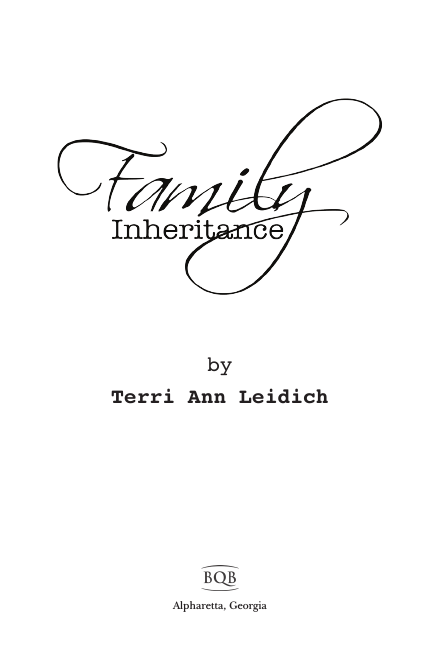 No part of this book may be reproduced in any form or by any means, electronic, mechanical,
digital, photocopying, or recording, except for the inclusion in a review, without
permission in writing from the publisher.

This is a work of fiction. All of the characters, names, incidents, organizations,
and dialogue in this novel are either the products of the author's imagination or
are used fictitiously.

To
my husband Glenn,
who supports my dreams,
and
my daughter Lori,
who is my biggest fan.

The old farmhouse creaked in the night air, and the wind howled through the badly
caulked windows. Nausea, shortness of breath, and stomach pain were assaulting Anna
Teresa Miller's body as she lay in her bed in the darkened bedroom. She figured she
was dying, but she didn't care. Her life had never been very good, so how could death
be worse? The doctor had warned her that diabetes could kill her, that it would attack
her kidneys and her other vital organs, but what did it matter?

As her mind fought to stay alert, thoughts rambled in and out, scrambled together,
leaving her unsure of what was happening and what was just a memory. In one moment,
she was three years old standing beside her mother in the ramshackle barn where cows
were herded in each night and milked. Anna's stomach rumbled and hunger pains gripped
her thin body, but she knew she wouldn't get supper until all the chores were done.
Even at her young age, she had chores.

Suddenly, she was fourteen and her mother had dropped her off at Walter's family's
farm to work for them. Her father had died, and her mother could no longer care for
her.

As the memories floated in and out, she fought to remember where she
was now and
what year it was. For a brief moment, she knew it was 1990 and she was still in the
farmhouse she had moved to as a teenager.

Then she was sixteen, pregnant, and being forced to marry Walter, a reluctant groom
at best.

Her mind relived the pain of losing that baby and three more after that. She was
certain then that she wasn't supposed to be a mother and had convinced herself that
she didn't want to be.

By that time, the farm could no longer support them, so Walter would pick up odd
jobs, leaving most of the farm chores to her. Life with Walter had been hardâoppressive
poverty, backbreaking work, and abuse. Then Helene, Alice, and Suzanne had been born,
adding to her workload and escalating Walter's laziness, drinking, and angerâat her,
at life, at the kids, and at the fact that he'd never had a son.

When she'd first become pregnant, Walter's mother, who sometimes tried to be good
to Anna, told her that having children meant she wouldn't be lonely when she grew
old. Now, as she lay dying alone in the creaking house that had been her prison and
her home for over forty-five years, a cynical chuckle passed through her lips and
a tear slid down her cheek.

Her mind once again slipped into the past to a day when her daughters, with their
dirty faces, tangled hair, and soiled clothing, sat on the rough wooden floor, cutting
out pictures from old magazines and catalogs as slight drafts of wind shivered through
the poorly insulated walls and ruffled the pages. Chatter occasionally erupted in
an otherwise silent and serious atmosphere.

“I'm going to marry a rich man and live in a big, beautiful house,” ten-year-old
Helene had exclaimed as she carefully arranged the figures of a handsome man and
a beautiful woman among pictures of luxurious homes.

“I'm going to have lots of kids and be a really good mom,” Alice proclaimed with
the determination of an eight-year-old.

Seven-year-old Suzanne's voice was serious as she declared, “I'm going to work in
a big office and be the boss of people.”

That day, Anna had felt anger, fatigue, and defeat at her girls' wild imaginations
and their ideas that life could be better. Anna knew it wouldn't be.

Overwhelmed by the constant work that the farm, the old house, her three girls, and
Walter required of her, Anna's life had no room for dreams or play.
That particular
day, and many before and after, Anna had felt as though the world rested on her shoulders.
She had often been bitter that nobody seemed to know how hard she worked or what
a burden the old house and those three girls were on her. It certainly wasn't the
life she had wanted, but her mother had reminded her often enough by saying, “You
made your bed, you lie in it.” So Anna had done just that.

Anna's eyelids fluttered, and a shiver ran through her body as the same memory took
hold again. A noise had erupted in the kitchen when the back door slammed open against
the wall. Fear crossed the faces of her young daughters as a drunken voice bellowed,
“Where are you, Anna? I'm hungry. Get in here and fix me something to eat!” The sound
of a fist pounding against the kitchen table resonated into the living room as Anna
scurried toward the raging man who now stood in the kitchen doorway, swaying unsteadily
on his feet.

The memories stopped running through her mind like old motion pictures, and everything
was starting to go dark. It had done that several times during the night. Her conscious
mind knew she should call an ambulance, but she wasn't ready yet. Maybe she would
just die in bed because it didn't really matter to her where she died. She was tired
of living.

Anna's kids didn't know about her health problems because Helene had stopped talking
to her years ago, and Suzanne had just slipped out of her life. Alice tried, but
Anna didn't know how to talk to her middle daughter. In fact, she never did know
how to talk to any of them. She had tried to raise them better than her mother had
raised her, but her kids hadn't responded the way she had expected them to.

Walter had been a mean, abusive man his entire life, and Anna knew she had never
loved him. For much of his life, she hadn't even liked him. Yet, when he died, she
missed his presence. He was all she had ever known.

As darkness covered her eyes, momentary panic overwhelmed her because the shadows
were so thick.
Is this what it will be like forever?

“No, Anna, there is light waiting for you, but you're not done yet,” a voice whispered
in the darkness.

Quickly opening her eyes, she scanned the room. At the end of her bed, she saw a
shadow. “Who's there?” Her weak voice tried to reach the specter.

A cold breeze echoed throughout the dusty, dingy room. The figure became
clearer
as Anna grappled with her fading consciousness.
It's a man, an old man, gray and
unshaven.
It took a moment, but her weary mind grasped a vision of her husband looking
like that just before his death. Scared at the thought of seeing him again, her voice
quivered into the empty room, “Walter? Is that you, Walter?”

The apparition inched closer. Anna's hands shook as she grappled to pull the sheet
up over her face. “No, please, Walter. Go away,” she pleaded. “Don't hurt me. Please
don't hurt me anymore.”

The specter seemed to stop moving, hovering there, and the voice became a whisper.
“I can't hurt you anymore, Anna.” Anna slowly pulled the sheet down and watched with
wide, fearful eyes as darkness surrounded the vision; it began to fade. Pain-filled
words echoed, “Don't come yet. I don't want you to suffer this pain. Set your life
right, Anna.”

“I don't understand,” she whimpered.

The sounds were farther away now, echoes in the quiet room. “Set your life straight,
Anna. Do right by them . . . do right by them.” The voice faded, and Anna could feel
in the air that the ghost had disappeared.

The room was eerily quiet except for her own labored breathing. “I don't know what
you mean. I don't understand . . .” she cried.

Memories of her life and her daughters once again floated through the darkness like
a movieâvisions of her children as babies, then toddlers, teenagers, and then young
women. Tears slid down her cheeks as she called their names into the empty room.

With her last bit of consciousness, she reached for the pad and pen on the bedside
table that had three telephone numbers neatly printed on it, and scribbled a message.
Picking up the bedside phone and summoning the last of her strength, she dialed 911.
After mumbling her address into the receiver, Anna closed her eyes and the world
went black.

A beautiful April morning peeked in through the windows as Helene sat on the king-sized
four-poster bed. Picking at the decorative pillow she held in her lap, she watched
Bill's reflection in the mirror in the adjoining bathroom. She could smell the lemon
scent of his shaving cream as he maneuvered the razor over his face. She gazed in
fascination as he guided the sharp edge over his chin and down his cheek. She pulled
at the embroidery of a brightly colored flower as he made stroke after careful stroke
with confidence. Mesmerized, Helene watched in silent fury, yet part of her was still
drawn in, even after twenty years of marriage, by the man's self-assurance.

Caught up with the reflection of his handsome face, almost-black hair, and blue eyes,
she refused to deal with the reality of her life because it was much easier to keep
pretending that things were different. Helene's voice stuck in her throat. There
were so many questions she wanted to ask.
Why do you cheat and lie? Who is she this
time? Why do I put up with it?
Even with those questions blasting in her mind, she
took a deep breath and spoke in even tones that belied the tension building at her
temples. “Will you be home for dinner?”

Bill didn't glance in her direction as the lies flowed smoothly through his lips.
“No, I've got to work late on a case that's going to court next week. I'll probably
work most of the night.”

Helene furiously grabbed the tassel on the corner of the pillow.
How did
you get
so good at lying?
As she listened to his words, she remembered the smell of the familiar
perfume that had assaulted her nose, and the ever-so-light smudge of red lipstick
on the collar of his shirt that she had taken to the cleaners yesterday. Her heart
pinched in agony as the man at the cleaners smiled and winked at her, teasing her
that she might want to change the color of her lipstickâred, he had said, was hard
to remove.

Bill moved away from the mirror and continued talking about his heavy workload. Helene's
demeanor didn't change as she quietly maimed the pillow with her pulls and tugs.
Shut up, Bill, shut up,
she wanted to scream.
Don't you know I've known about all
of them throughout the years? I've given them names. Can you beat that? I name your
mistresses!
The turmoil inside of her was at a full boil today, but she held it in
tightly, not letting it erupt or even seep through her calm exterior. A divorce would
be much more traumatic and expensive than replacing decorative pillows.