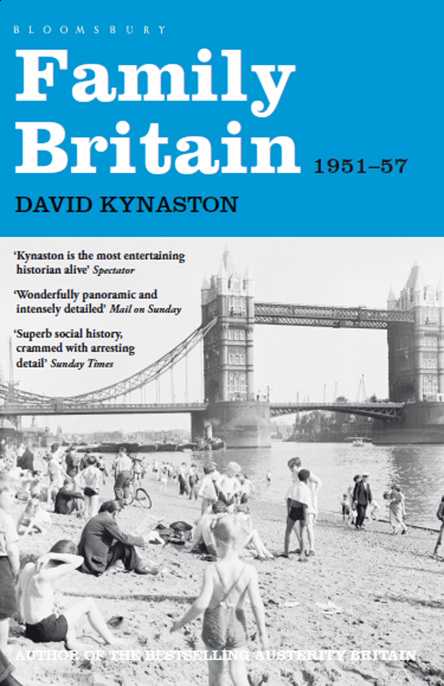 ‘The first volume,
Austerity Britain
, was a considerable popular success, and this volume is every bit as enjoyable . . . I could quote forever from this magnificent book. Professor Kynaston is the most entertaining historian alive’
Philip Hensher,
Spectator

‘Wonderfully panoramic and intensely detailed . . . It is this juxtaposition of the personal with the universal that makes
Family Britain
so utterly compelling . . .
Remarkable’
Craig Brown,
Mail on Sunday

‘Evocative and hugely appealing . . . It is the great strength of Kynaston’s almost Shakespearian approach to social history that he allows one half of his readers to wallow comfortably in nostalgia while the other half shudders with relief that the 1950s are half a century behind us’
Robert Harris,
Sunday Times

‘A narrative shot through with sharp insights and thoughtful reflections . . . Kynaston listens to his huge cast of voices and carefully interrogates their observations’
Juliet Gardiner,
Financial Times

‘This massive work is made highly readable by all sorts of extracts and quotations from diaries, columns and oral records, and deals as much with ordinary, everyday lives as with the machinations of politics and power . . . I await with pleasure the next volume of this mammoth enterprise’
Katherine Whitehorn,
Guardian

‘Kynaston has dredged reminiscences, diaries, political archives, newspapers and magazines for every scrap of interest and detail’
Joan Bakewell,
Observer
Books of the Year

‘Kynaston is in almost perfect control of his vast pile of material . . . He can be witty, he can be brisk, he has the timing of a first-rate novelist’
Scotsman
Contents

---- THE CERTAINTIES OF PLACE ----
Dedication
PART ONE
Chapter 1 All Madly Educative
Chapter 2 A Narrow Thing
Chapter 3 You Can’t Know Our Relief
Chapter 4 Hardly Practicable
Chapter 5 What Will Teacher Say?
PART TWO
Chapter 6 Not Much Here
Chapter 7 A Different Class of People
Chapter 8 It Makes a Break
Chapter 9 I’ve Never Asked Her In
PART THREE
Chapter 10 Hit It Somebody
Chapter 11 A Kind of Farewell Party
Chapter 12 Moral Courage
Chapter 13 Can You Afford It, Boy?

Dunk by Lubar, David
Twisted Together (Monsters in the Dark) by Winters, Pepper
Wine and Roses by Ursula Sinclair
Witches' Waves by Teresa Noelle Roberts
Endlessly by C.V. Hunt
Bloodstain by John C. Dalglish
Spank: The Improbable Adventures of George Aloysius Brown by Daniels, Alan
Girl, Undressed: On Stripping in New York City by Ruth Fowler
Reckless Radiance by Kate Roth
A Rule of Queens (Book #13 in the Sorcerer's Ring) by Morgan Rice