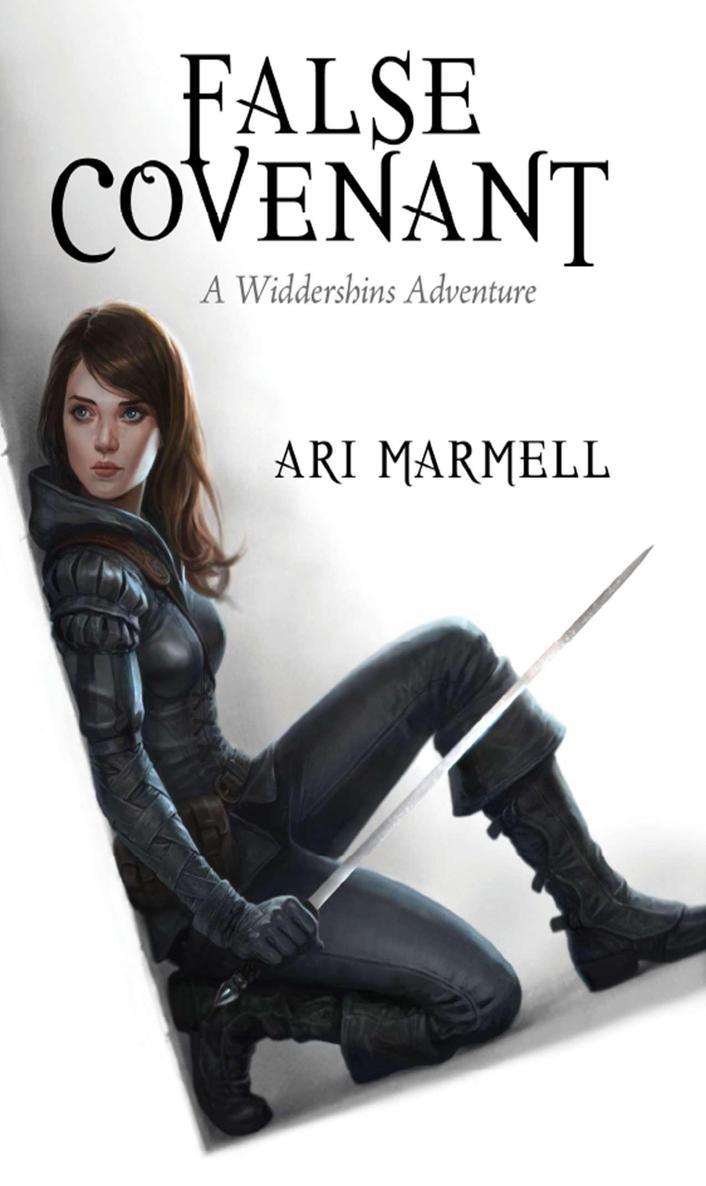 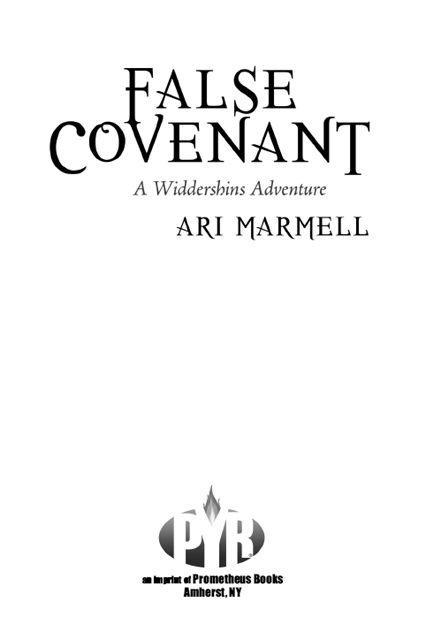 Published 2012 by Pyr®, an imprint of Prometheus Books

False Covenant
. Copyright © 2012 by Ari Marmell. All rights reserved. No part of this publication may be reproduced, stored in a retrieval system, or transmitted in any form or by any means, digital, electronic, mechanical, photocopying, recording, or otherwise, or conveyed via the Internet or a website without prior written permission of the publisher, except in the case of brief quotations embodied in critical articles and reviews.

Summary: Davillon's economy has suffered in the half-year since the brutal murder of Archbishop William de Laurent, but when the new bishop uses trickery and magic to try improve the situation he inadvertently admits an evil creature that only Widdershins and her personal god can stop.

Beneath the sun, the roads are man's
,

His work, his home, his town, his plans.

But 'ware the ticking of the clock:

The night belongs to Iruoch.

—from an old Galicien children's rhyme

“But I don't understand,” said golden-haired Adeline. “You told me that you were not hungry this evening.”

“I am not,” said the Marquis Iruoch.

“And you said I had not offended you in any way,” said Adeline.

“Then why do you seek to murder me?”

“Because I may later be hungry,” said Iruoch.

“Because you may later offend me,” said Iruoch.

“And because I can.”

—from “The Princess on the Road of Beasts,” a popular Galicien fairy tale

If she hadn't already known, she'd never have recognized the lie for what it was.

She'd been here once before, a guest in the sumptuous manor of the Marquis de Ducarte. Now, as last time, the air was heavy with the strands and strings of music, the floor vibrating with dancing couples. Vests and hose were deep, richly hued; magnificent gowns with hoop skirts resplendent in all the bright colors of spring. The servants—though clad largely in blacks, whites, and grays—were scarcely less fancy than the guests; the tables over which they stood were laden with fish and fowl, pork and pastry, and an array of wines that would have put most vintners and taverns to shame. The breath of a hundred conversations pursued the delectable aromas up toward the ceiling, where they swirled around hanging banners and streamers. On some snapped and flapped the sun-and-crown ensign of Vercoule, highest god of Davillon; on others, the rose petals of Ruvelle, patron goddess of the Ducarte line and its current scion, Clarence Rittier.

In nearly every way, it looked the same this time around as it had six months ago, when Madeleine Valois had attended Rittier's greatest fete ever, to celebrate the arrival of his honored guest, Archbishop William de Laurent. Nearly every way—but not all. The gleam in the eyes of the guests was perhaps just a bit wild, a bit worried; the tone of their friendly laughter and malevolent gossip high and desperate. Banners and streamers, tablecloths and gowns, were immaculately washed and well maintained, but they weren't
new
. Once, they'd have been new, every last one.

No more. Not since Rittier's disgrace—and certainly not since Davillon's. The ball, the joy, the carefree celebration…A façade, every bit, a lie rigidly maintained by the city's aristocracy because none of them had the slightest clue of how to live any other way.

Well, almost none of them.

Dazzling in her gown of velvet green, the intricate locks of her blonde wig piled high like a hairy wedding cake in the latest fashion, Madeleine glided through the crowd, a beautiful wraith leaving nothing but a faint breeze and the occasional heartbreaking smile to mark her passage. Her knees grew tired of constant curtseying, her cheeks stiff from carrying that artificial smile, her voice hoarse from the false good cheer.

“Your Grace, so lovely to see you again! Are you well?”

“Indeed, it's been a while. I fear family matters have kept me from attending as often as I'd wish. But I'd be delighted to accept your invitation…”

And then, under her breath, so quietly that nobody could possibly have heard her, Madeleine said, “Could you please, please,
please
make everyone stop talking for a while? Or you could just strike me deaf. There's a lot to be said for being deaf, I think. At least it's quiet….”

From everywhere and nowhere, a faint ripple of amusement—a voiceless laugh—sounded in Madeleine's mind.

Most of the time, her unseen companion's replies of pure emotion and intent could be only loosely translated into actual words. But in this case, the meaning of “Me, too” was unmistakable.

The corners of her lips twitching as she tried to simultaneously scowl and smile, Madeleine drifted past a table of various wines and punches, and just about collided with one of the men responsible for serving said beverages. A chorus of “Eep!” from Madeleine and “Ack!” from the servant—or syllables to that effect—accompanied a frantic dance of skittering feet. Half a cup of citrus punch sloshed across the floor, and it was only the young woman's surprising speed (with perhaps the tiniest hint of divine intervention) that prevented her gown from absorbing the briefly airborne aperitif.

Madeleine blinked at the flustered fellow, who didn't sound much like any professional servant
she'd
ever dealt with. “No harm,” she murmured. And then, forcing her voice to squeeze itself into a more haughty outfit for which it was ill suited, “But do take more care in the future, yes? Not everyone here is as quick-footed as I am—nor as forgiving.”

“What the happy hopping horses was
that
about?” Madeleine demanded of her silent partner. Then, when the response was something about the overall clumsiness of human beings in general, she could only wait until she was sure nobody was watching and then blow her unseen friend a quiet raspberry.

Madeleine about jumped out of her skin, and then twisted to face the speaker. It was another young woman, perhaps half a decade older than Madeleine herself, clad in a golden gown and a wig so pale it was less “blonde” and more “translucent.” Madeleine had seen her before, at several of the aristocracy's fetes and balls, but not in some time; if she'd ever known the woman's name, it had long since slipped her mind.

“I mean,” the woman continued, “I think we all understand the marquis's…predicament.” It was the closest anyone in the blue-blooded crowd would come to overtly acknowledging Rittier's recent troubles, let alone their own. “So a certain degree of belt-tightening is to be expected, I suppose even commended. But really, I think perhaps he could have afforded to stint a
little
on the refreshments, if it meant acquiring a higher class of server, wouldn't you think? I mean, one expects a certain minimum degree of civilization in one's affairs.”

Madeleine—who wanted nothing more than to sigh and walk away, or perhaps smack the woman on the back of the head so hard that her eyes would sprout hair—instead pontificated at length about how right she was, and how it was utterly disgraceful for a man of Rittier's (former) influence to be so lax in his standards, and how it simply wouldn't do at all, and perhaps they ought to consider writing the Duchess Beatrice and ask her to have a word with the marquis before the affair become scandal worthy?

(By the end of it, Madeleine was having serious difficulty keeping a straight face, mostly because her invisible companion was quietly having hysterics.)

Eventually, the other noblewoman wandered off to go find someone else to grouse with (or at, or about), and Madeleine returned her attentions to the task at hand.

Or, most of her attentions, anyway.

“Tell me again, Olgun, why I ever wanted to be one of them?”

Olgun, the invisible presence to whom she'd been speaking throughout the evening, shook a nonexistent head. And then, perhaps troubled by the tone of Madeleine's thoughts, willed a gentle question across her psyche.

“Hmm? No, I'm fine. I just…” She stopped, realizing that she was chewing on a loose lock of hair from her wig—a very
un
aristocratic mannerism. She swiftly spit it out, patted it back into place, and sighed softly. “Olgun, that was twice in two minutes something caught me by surprise. The drink, and then that—that
woman
…I'm supposed to be more alert than that, yes?”

The Inbetween People by Emma McEvoy
The Girlfriend (Single Wide Female in Love, Book 2) by Lillianna Blake, P. Seymour
Early Dawn by Catherine Anderson
Living Dead Girl by Tod Goldberg
Only the Truth by Pat Brown
Talus and the Frozen King by Graham Edwards
Stink: The Incredible Shrinking Kid by Megan McDonald
Ammonite by Nicola Griffith
A Promise for Tomorrow by Judith Pella
The Rebel by Amelia Atwater-Rhodes