Read Falling for Your Madness Online

Falling for Your Madness 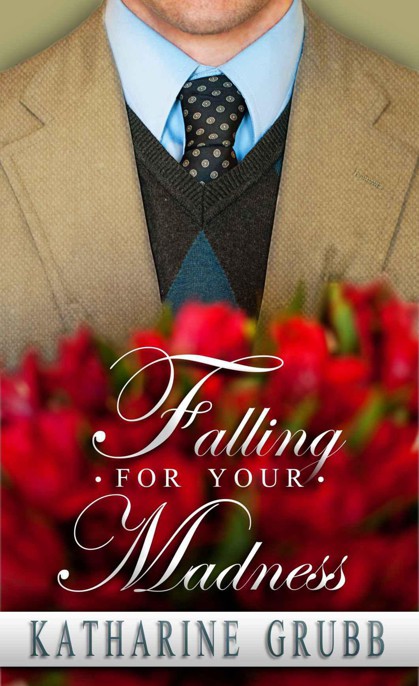 FALLING FOR YOUR MADNESS

a story of love, chivalry, and the power of words

For Corbin and Perrin

Falling For Your Madness
is a work of fiction. All names and places are from the author’s imagination. Any resemblance to persons living or dead is purely coincidental. The poems quoted in this book,
Charge of the Light Brigade, Tears Idle Tears,
and
Crossing the Bar
were written by Alfred, Lord Tennyson and are in the public domain.
Nothing Gold Can Stay
is by Robert Frost and is also in the public domain. The scripture David quoted,
1 Corinthians 1:26, and Luke 12:48 is from the King James Version of the Holy Bible, also in the public domain.

Julie said that she was doing me a favor, but she was wrong. I was the one doing her a favor. I came to her baby’s first birthday party under protest, and she knew it. We were close enough friends that she could handle the fact that I didn’t think that a Sunday afternoon with her Mommy friends and her in-laws and her husband’s colleagues was a good way to spend my time. Fortunately for her, the Patriots game was over. We had won.

“No, Laura. I’m doing you the favor. I’m sending David to get more ice. Go with him.”

I had met David before—at least, I thought I had. I thought he was in her husband’s department at Boston College. This David guy certainly looked like a professor. He had on wool trousers and a stereotypical tweed jacket and a tie. Yes! I did remember meeting him. At Julie’s Memorial Day party; he was there, and we had even talked. I remembered thinking how odd it was that someone would dress in wool and tweed when the temperature was in the high 90s. I remembered thinking he was awfully tall, that he should do something about that curly black hair in his eyes, and that he was easy to talk to. I also remembered that I had wanted to get Trey’s attention at that party. I had had Trey’s attention all summer, kind of. Now summer was over.

“Hello, Laura. Do you remember me?”

“We have been given a quest. We need to buy ice, and I’m hoping you’ll go with me? I assure you that we’ll be back in twenty minutes.”

I did remember him! The English accent!

“I’m not that familiar with East Boston. I don’t know where to find ice.”

“Never fear. My driver, Merle, will take us where we need to go.” David offered me his arm.

No man had offered me an arm since high school prom, and even then I had to tell my date how to do it. Julie
has
done me a favor. For that minute, I forgot that I was sort of feeling sorry for myself that I couldn’t be in Chicago for my father’s show and that I was moping over Trey. I’d take the twenty minutes of tall, English-accented distraction.

“You have a driver?” We maneuvered around the party guests to get to the front door. It seemed like all of Julie’s and Brandon’s friends made way for this man. I assumed it was because of his height.

“He is actually a servant, mentor, and guide. He also does very bad card tricks, washes my socks, and makes excellent toast.”

He opened Julie’s front door for me, and his black Crown Victoria arrived at the curb. He opened that door for me too.

It was a perfect New England evening, the kind where the summer light is still clinging to the fading leaves. There was a hint of yellow here and orange there, even in a completely urban, concrete-and-aluminum neighborhood like Julie’s. I tried to stop, as my Dad had taught me, to savor little bits of life or light or magic or whatever it was that created inspiration. This was a good night for that. I wished I had brought my pencils with me. A drawing would have made a good distraction, too.

It was a warm night. This was the last weekend, I thought, that I could wear my favorite cotton dress, the one that I felt especially pretty in. I didn’t care that I was overdressed for a 1 year-old’s backyard barbecue birthday party. Everyone else was in shorts and graphic tees and flip-flops. Everyone except the man who sat next to me in the back seat of a black Crown Victoria.

“Julie said you came to the party alone. Is that true? It would be in very bad manners if I were encroaching on your sweetheart.”

I giggled and then felt silly for doing so. “No, my date was the stuffed bear that I left for baby Clive.”

“Oh, so you like your gentlemen with whiskers?” He smiled at me. He winked at me. He was
flirting
with me. “If you leave the bear for baby Clive, who will escort you home?” Had he flirted with me when I’d met him in May? Or was I so wrapped up in Trey,
Mr. Baseball
, that I didn’t notice?

“I was going to take the T in to Government Center, then switch to the Green Line to Coolidge Corner.”

“That cannot be borne, my dear lady. You would have to walk a half mile or more to the nearest subway station. Then it would take you at least an hour. You should pick a more chivalrous bear next time. I have never known any stuffed animal to be particularly well-mannered. Make a note to tell little Clive to read the King Arthur book that I gave him to the bear when he’s older. Perhaps that will teach him a bit about chivalry.”

I had just gotten in the car with a nutcase. But he had a British accent, so I probably would have followed him anywhere.

“On Sundays, I prefer to be in my home by 8 p.m. I would like to suggest that at 6:30 tonight, Merle and I drive you home from the party. You will arrive in safety and dignity and end my week on a happy note.”

The driver stopped at one of those corner stores that are always in the rougher neighborhoods of Boston. He was a small old man with a white crew cut. He wore oversized black glasses and a yellow Nehru jacket. He had moved the driver seat up as far as it went, so that David could have plenty of leg room. They were quite a pair. He turned around to face us.

“But I’m not ready to leave the side of this pretty lady.”

“You told her twenty minutes. I saw this coming. You should have said thirty.”

“Spoilsport. Excuse me, Laura. Merle is right. I must get the ice. I’ll be back shortly.”

David and his driver brought me back to the party exactly twenty minutes after we had left. We came in as Clive was tearing into his gifts. The event had ceased to be a party and now was an explosion of tissue paper, cake crumbs, screaming infants, and far too many presents for a child. I don’t know what Julie was thinking, but I thought that this party was a little too much for kids so young. I told David so as he stood next to me while I ate my cake.

“I think when I’m a mother, I’ll save the bigger celebrations for when my kid can remember it.” I was glad David had stayed by my side.

“Will you? Should I ever have a child of my own, I’ll probably be so proud that I’ll invite the queen of England. We never really know how vain we are. Especially once we have an heir. Now Laura, Brandon told me you are an illustrator; is that correct?”

“Yes, I freelance and do web design. I work from home.”

“Ah. Then getting out was hard for you today. If you’re not working, then you’re not getting paid.
”

“You’re right. But I have to make time to play, or I’d never see my friends.”

“I agree. Every Sunday afternoon, I attend social-stroke-cultural events. And today’s obviously was social, unless you think screaming toddlers and exhausted parents are cultural—but I’m guessing you don’t, since you’re an artist.”

Brandon saw us. “Thank you for the ice, David. You saved the day.”

“It was my pleasure.”

I excused myself and followed Brandon into the kitchen. “Tell me more about David.”

He nodded his head. “Julie’s behind this, isn’t she?”

“Maybe. There’s no
this
yet. I’m just curious.”

“What happened to Mr. Baseball?”

“An away series. At least that’s the excuse I have this weekend. David wants to drive me home. Should I let him?”

“David is a great guy. Very professional. We share an office this semester, and I read his dissertation, and man, he’s a better writer and scholar than I am. He’s really a complete package: great lecturer, great researcher, popular with students, he . . .”

“No, not the professional stuff. The personal. There’s not a hidden wife or kids anywhere, is there?”

“Would you agree to let your sister go out with him?”

“My sister? My sister has three kids with three different fathers. I’d love it if she met a guy who was one-tenth the man David is. Let him take you home. You could do a lot, lot worse. You know, Laura, he only came today because I told him you were coming. He remembers you from Memorial Day. He’s always asking about you. He is really a great guy.”

So David is a
really great guy
. But I’d been told that before. Julie was the one who had set me up with Trey. Somehow the handsome princes who had stumbled into my life always, eventually had turned into frogs.

We had left exactly at 6:30, and I had to admit, I was ready to sit in the back of that Crown Victoria and see what this David guy was going to do and say.

“Do you mind very much if I ask you questions? We’ll have a long ride, and I’d like to make the most of it.”

“Sure.” Because we were on a toll road, traffic was backed up at the tunnel entrance. The car slowly edged forward in the traffic.

“What was the last book that you read?”

“David!” The driver turned around. “We’re entering the tunnel!”

“Of course we are, it’s a one-way street. There are no other options.”

“David! It’s a tunnel! Don’t you think you should consider the lady’s delicate boundaries?”

What were they talking about?

“Oh my good God, why didn’t you say something sooner? What should I do?”

Then David turned and looked at me. He was lit up as if he were on fire. “Tennyson! Laura, I do hope you like poetry. If you don’t, it’s too late to do anything about it.” Then David stuck his hands underneath him and closed his eyes as the car entered the tunnel. I didn’t know what was going on, and I was half-scared to death, but the whole scene was so comical.

Then he started shouting,

All in the Valley of Death rode the six hundred!”

He opened his eyes in wonder. “You do?”

“In high school, I had to memorize it. I didn’t like it at first, but then my father told me that it was good for me. It was good for inspiration.”

Mountain Devil by Sue Lyndon
The Chessmen by Peter May
Mission by Patrick Tilley
Taste: A Love Story by Tracy Ewens
The Bonner Incident: Joshua's War by Thomas A Watson, Michael L Rider
Gregor And The Code Of Claw by Suzanne Collins
Eternal Kiss by Trisha Telep
Horizon by Christie Rich
THE STERADIAN TRAIL: BOOK #0 OF THE INFINITY CYCLE by M.N. KRISH
Last Ride of Jed Strange (9781101559635) by Leslie, Frank