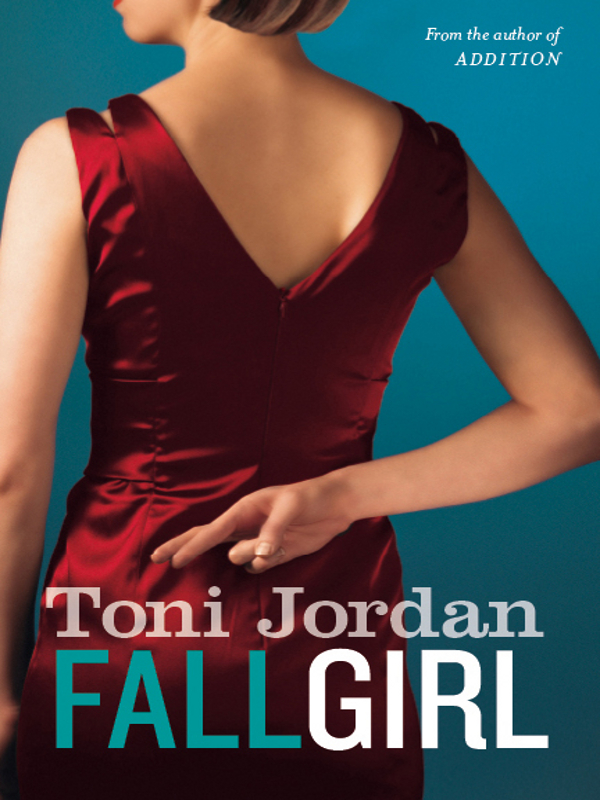 Praise for Toni Jordan and
Addition

S
HORTLISTED,
B
EST
G
ENERAL
F
ICTION
B
OOK OF THE
Y
EAR,
200
8 A
USTRALIAN
B
OOK
I
NDUSTRY
A
WARDS

S
HORTLISTED,
N
EWCOMER OF THE
Y
EAR, 200
8 A
USTRALIAN
B
OOK
I
NDUSTRY
A
WARDS

âToni Jordan has created such a real character in Grace that you are cheering her on, willing her to get to the top of the staircase, intact and unharmed. Jordan's voice is distinctive, refreshing and very Australian. Her debut novel is juicy and funny, just like its protagonistâ¦this is a gem.'
Sydney Morning Herald

âExcellentâ¦a light and lovely story that champions being different in a world where being different is treated with suspicionâ¦Jordan strikes a fabulous blow for resolute individuality.'
Sunday Telegraph

âOne of Jordan's many strengths is that she never patronises Graceâ¦This novel is energised by Grace's grumpy, funny, obsessive, fearful and insightful voice. Her strangeness is beautifully craftedâ¦A winning love story, a sorbet for tired souls.'
Michael McGirr,
Age

âSmart and sassy, cool and seductiveâ¦A writer destined to make her mark on the Australian literary scene.'
Brisbane Affair

âA Trojan horse of a novel. It has a cutesy cover, a kooky love story and a “hot” wisecracking blonde heroineâ¦But the heroine, Grace Vandenburg, is no ditsy Bridget Jones everywomanâ¦
Addition
raises a lot of questions about our values and our society, couched in disarmingly easy-to-read proseâ¦lashings of spot-on satire.'
Australian Book Review

âFizzes and sparklesâ¦It is, of course, also a love story with a happy ending, which is one of the most satisfying narrative trajectories there is.' Kerryn Goldsworthy,
Australian Literary Review
âSensuously written, fabulously entertainingâ¦a first novel that takes your breath away.'
West Australian

âDelightfulâ¦full of charm and humourâ¦
Addition
is an excellent debut novel, and Toni Jordan is a novelist to look out for.'
The Press
NZ

âBringing a quirky humour and a sympathetic view of diversity to her story, the author sustains the momentum to the end of this engaging romantic comedy.'
The Times

âGemlike debutâthink
The Curious Incident of the Dog in the Night-
Time
thrown into the world of chick-litâ¦A smartly written comedy that cheekily suggests recovery may not be for everyone.'
Kirkus Reviews

TONI JORDAN was born in Brisbane in 1966. She has a BSc. in physiology from the University of Queensland and qualifications in marketing and professional writing. Her debut novel
Addition
was first published in 2008 to critical acclaim. It was shortlisted for the Barbara Jefferis Award and longlisted for the Miles Franklin in 2009. It has been published in sixteen countries worldwide. Toni lives in Melbourne, where she works part-time as a freelance copywriter, and has a column in the
Age
.

The paper used in this book is manufactured only from wood grown in sustainable regrowth forests.

All rights reserved. Without limiting the rights under copyright above, no part of this publication shall be reproduced, stored in or introduced into a retrieval system, or transmitted in any form or by any means (electronic, mechanical, photocopying, recording or otherwise), without the prior permission of both the copyright owner and the publisher of this book.

First published in 2010 by The Text Publishing Company

This project has been assisted by the Commonwealth Government through the Australia Council, its arts funding and advisory body.

To Bobo
Thanks for all the coffee

From the beginning it is the glasses that give me trouble. They have a mind of their own. When I practised back at Cumberland Street they behaved perfectly yet now, in the sittingroom of the mansion, they are heavy and uncomfortable. They pinch my nose and won't stay still. When I raise my head to look at the Streeton landscape on the opposite wall they sit so flat against my face that my eyelashes brush against them when I blink. When I bow my head in contemplation they slide down my nose. I am continually propping them back up the bridge with my middle finger.

This erratic spectacle dance is not a good sign. I have worn these glasses before without this problem; perhaps I have bent them, squished them in my purse or against the arm of a chair without realising. Still, all this fidgeting makes me look nervous. This is an important interview. It would seem odd if I wasn't nervous.

Finally Professor Carmichael appears in the doorway. âDr Canfield?' he says, and he introduces himself, bestows a handshake.

I am following him down the fine wide corridor two paces behind and this is when the glasses earn their keep. I think fast, on my feet. Ruby would be proud. Daniel Metcalf himself is standing across from the doorway to the boardroom. He is leaning against a grandfather clock, mobile against his ear, finishing a call before we go in for the interview. I bend my neck in a sharp movement to rifle through the papers in my briefcase, checking I have everything I need. The glasses fall. The heavy tortoiseshell frames bounce on the Persian runner and clatter against Daniel Metcalf 's left boot. They are outdoor boots, scuffed and water-marked.

We kneel at the same moment. Our knees almost touch. He sets the phone on the floor; it makes muffled sounds that he ignores. He picks up the glasses with his thumb and index finger as if they might bruise and folds each arm closed with a clack. Down the palm of his right hand, from the inside tip of his index finger to the folds of his wrist, is a straight white scar raised like a thread.

âSorry,' I say. I bite my bottom lip and tilt my head down.

âYou should be,' he says. He rests the glasses in the centre of his palm, raises and lowers his hand to gauge their weight. âIn the wrong hands these could be a deadly weapon.'

âJust as well I'm not the wrong hands,' I say.

My father often says that the very rich surround themselves with objects that increase in value, while the average person selects things that decrease in value. This house contains, among other assets, the Streeton landscape, the clock in the hall, the antique dining table with gleaming French polish, and Daniel Metcalf. He too is worth more with every year that passes. He is not as tall as the clock and easier to transport than the table. He does not wear glasses: even a minor weakness such as this can be fixed with money.

I would recognise him anywhere from the photos in the social pages. He is thirty-four and his hair is brown and slightly too long. He could use a shave. He is not nervous or awkward. He's wearing jeans and a striped linen shirt that is either the work of a very expensive designer or else needs an iron. I learned long ago that immaculate suits and shiny shoes are for men who rely on the opinions of others for their livelihood.

I do not know him, but I do not need to. I can tell the way he votes, the restaurants he frequents, who cuts his hair. I knew the house would look like this and would be located here in Toorak among the other mansions. People everywhere play the roles they are assigned. Being very rich is like belonging to an excessively controlling cult.

The light in this room is calmer, more refined than outside. It is softer, as though nervous about resting on an antique. On the other side of the table, Professor Carmichael is on Daniel Metcalf 's right. Carmichael has a young face for a man in his mid-seventies, with pink skin like a baby's stretching to the top of his head. His age and general level of disapproval are revealed, though, in the saggy baggy skin of his throat, which could fold over itself and conceal a small Volkswagen. Before he began administering the trust, Carmichael was a researcher in pure mathematics at a sandstone university on the other side of the world. He appears to have no connections in science these days, no friends or colleagues at the universities I have chosen. Since his retirement due to ill health this is his only professional commitment. Apparently he was a friend of Daniel Metcalf 's father, so this job is a lucrative debt of honour.

Carmichael fulfils his obligations without diligence. The decision has always been his and seems based on very little. Daniel Metcalf himself is a rubber stamp. His attendance at these final interviews is a formality. For a Metcalf, twenty-five thousand dollars is tax-deductible small change.

On Daniel Metcalf 's left is a dowdy woman, mid-fifties, seventy-five kilos with cat-green eyes. She has a notepad in front of her and a pen in her hand and keeps her head down. She is the secretary, Mrs Tesseraro. I can disregard her.

We sit on redwood chairs with curved legs and crimson velvet seats and backs, evenly spaced around the table. For a moment I find it hard to concentrate on the three people across from me: every wall of this room holds rows of soft leather books, probably bought by the metre for their patina. The faces blend in.

Meet Me at the Beach (Seashell Bay) by V. K. Sykes
The 90 Day Rule by Diane Nelson
Chronicle of a Corpse Bearer by Cyrus Mistry
Captured by Melinda Barron
Texas Haven by Kathleen Ball
When Night Falls by Airicka Phoenix
Best Friend to Perfect Bride (Contemporary Medical Romance) by Jennifer Taylor
Boyett-Compo, Charlotte - WindTales 02 by WindChance
It's Not Like I Knew Her by Pat Spears
Realm of the Goddess by Sabina Khan