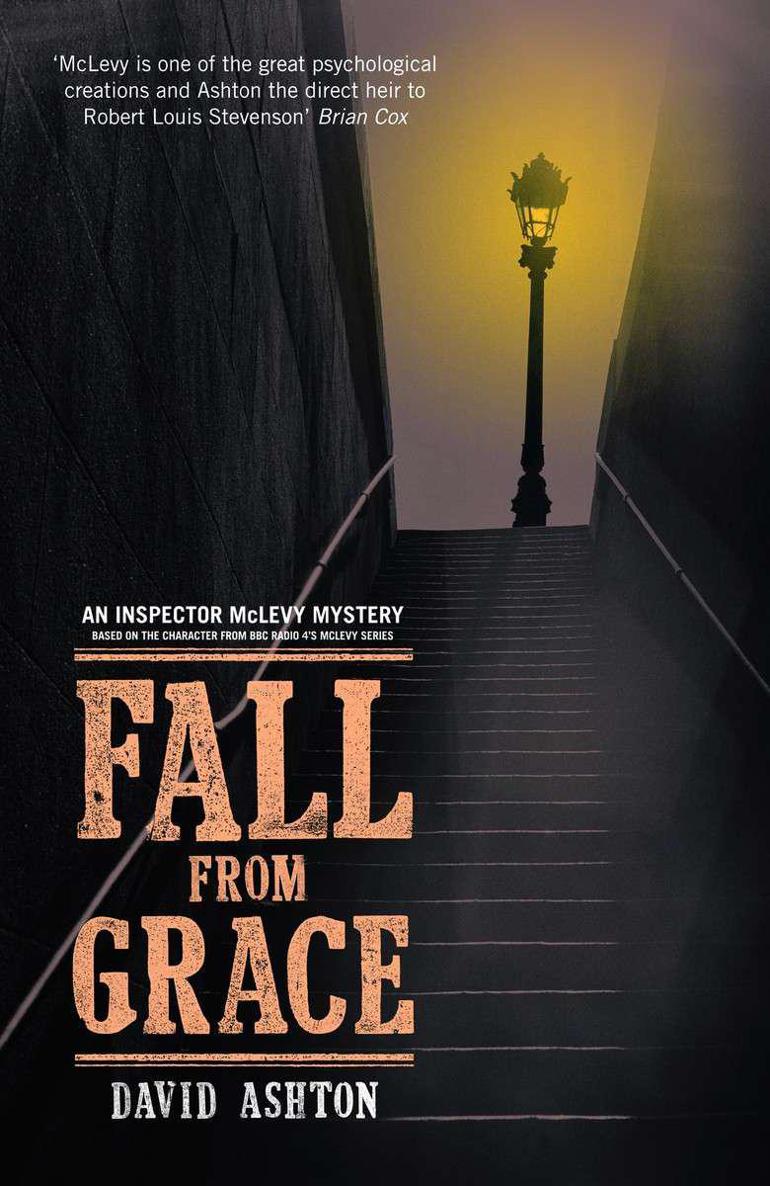 TO
LISA and MADELEINE

To die the death, for naught long time may last;

THOMAS SACKVILLE,
The Mirror for Magistrates

Inspector James McLevy looked at his shadowy image in the glass of the window.

‘You are a miserable bugger,’ he thus addressed the standing figure.

Past and through the ghostly outlines of his face, he viewed the city of Edinburgh stretching out below him, the various lights reflecting up into the night sky.

For a moment he thought to see a shooting star far away in the distance but decided it was a firework left over from Bonfire Night.

Of late he had taken to prowling the bookstalls of Leith marketplace, randomly buying anything that caught his eye. His latest haul included some stories by Edgar Allan Poe and a tattered book of Arab legends. Poe had little to offer on shooting stars but the wise men of the East were of the opinion that these manifestations were firebrands hurled by the angels to keep out the wild spirits of nature, which seek to climb the constellations and peek into heaven.

No danger of McLevy climbing any constellation, he didn’t have the puff.

The inspector crossed to the coal fire where on one side of the hearth a black encrusted tin coffee pot had its domain, lifted the thing up and shook it gloomily.

Dry as a bone. And his fourth cup of coffee, some of the grains of which were still lodged in his teeth, had produced no discernible effect on his depression of spirits.

As he clattered the pot back down, there was a stirring on the other side of the hearth.

Bathsheba opened one yellow eye to gaze at this intruder upon her slumber; a regular visitor of the evening, she would scratch at the window for entry, insinuate her elegant presence, lap up some milk from the saucer, curl up and sleep for a time, then slide back off into the night.

McLevy envied her that. He was stuck. She was on the move, a black cat that had crossed his path.

‘Whit luck have you ever brought me, eh?’ he demanded fiercely.

The cat went back to sleep and McLevy walked back to look down at a small rickety table where the plate from his supper had been shoved aside and its place taken by a thick ledger of sorts with red covers which lay open, the white page staring up at him in mute accusation.

To avoid this silent indictment, McLevy concentrated his gaze upon the scrapings of his meal; maiden’s hair and dribbly beards, the coarse sinews of the meat boiled into pliant submission and the water then used to cook the curly kale as vegetable accompaniment.

It was a speciality of his landlady, Mrs MacPherson, who would hand the steaming mixture over to him at the door as if it was some sort of Dundonian ambrosia.

She did, indeed, hail from Bonny Dundee. He had many memories of that city, few of them happy and, in fact, he suspected that these dark submerged hauntings might be more than a contributory factor towards his present malaise.

That and a woman with gypsy eyes.

The page still gleamed white; he sighed, sat down and picked up a short stubby pencil.

Other diarists might have quills and parchment; he had a blunt pencil and an old ledger, which was a relic from a past case of embezzlement

He was in the habit of jotting down whatever came into his head most evenings; nothing that would change the fate of humanity but it would preserve a record of his intuitions and thoughts, perhaps even philosophical musings.

One day he might publish such jottings of sagacity and be hailed as a fountain of wisdom. More likely he would be laughed out of the Leith police station so best keep it confidential for the nonce.

In fact he had kept it so confidential this night, he had so far not written a word.

Time to unburden, but how to begin?

He had read in the Arab book the idea that man was a mixture of the materiality that made up the universe.

It was either that or the maiden’s hair and dribbly beards.

The inspector made his choice, tongue sticking out from the side of his mouth, head bent close to the paper.

It could be his near eyesight was failing, but he wrote anyway. Always the same heading, only the date changed.

Of all the elements, fire is the least forgiving. Examine hell for instance. Or take Icarus, flying like an angel till the flame of the sun melted the wax from his wings and sent him plunging through the air, which likewise didn’t give a damn, in a downward dive till he hit the ocean and sank like a stone. Water isn’t all that merciful either.

Come to think of it, earth is the only one of four that gives a body half a chance. The blessed earth. We trample it beneath our boots and gouge it like a butcher a dead animal or a surgeon his cadaver, yet the earth does its level best to forgive us. Our sins.

A case that began almost a year ago has come to its natural end, and tomorrow will see the lid closed.

As is often with my pursuits, at times I was like a whirling Dervish, and at others, a mere bystander as Fate rolled out the dice.

The result of that throw was to witness a disaster in which all four elements played their parts. The reluctant earth, savage fire, howling wind and ice-cold water.

Be that as it may, I shall attend the closing. The lady of the house will be concomitant. There’s always a woman to hand. And the devil’s never far away either.

As long as folk steer the middle course, we may all rest easy but that rarely happens. Someone somewhere, high or low, tries to bend occasion to their will without success and then, to gratify a hunger they barely comprehend, takes a wee step sideways, a deviation, and imperceptibly puts in motion events that set the gates of hell quivering with anticipation.

To strive beyond yourself is human aspiration and yet it is also an item on Satan’s breakfast table. Right next to the boiled egg.

I should stop now. I fear my thought is moving in a direction that might well land me in the asylum.

But why does the vision of Icarus still hold in my mind?

Man strains every muscle to rise and embrace that which cradles the seed of his own destruction.

An unearthly yowl broke into this meditation; Bathsheba was at the window ready to embark upon her midnight prowl.

McLevy, with a sudden burst of energy, leapt up, pulled up the sill to let her depart and then leant his head out to follow her progress.

He watched as she padded along the damp slates and then slipped out of sight.

A strange cheerfulness unexpectedly possessed him, as if he had left his gloom upon the page.

James McLevy, inspector of police, would attack his next investigation with appropriate ferocity.

He looked out once more over his city. Edinburgh. And somewhere, towards the sea, the parish of Leith. His patch, where he was King of the Castle.

The cold November air stung at McLevy’s face as he let out a whoop of laughter that echoed in the still night.

Mary Rough looked grimly into the flame of the oil lamp as she listened to her son thrashing around in the recesses of the warehouse.

Noise enough to wake the dead, or, more to her concern, a distant night watchman walking the Leith docks. It had been a big mistake to let that boy near whisky but his nerves needed steadying, the great gowk, and a rinse of kill-me-deadly was all that would do the trick.

Unfortunately, it also gave Daniel Rough the illusion that he was ruler of the world, and, in addition, as is so often the result of whisky, brought out the cantankerous side of his nature.

Not that it needed much bringing out. He would take issue with his own shadow, but, in drink, Daniel would beat that shadow to the ground and stamp it to death with his big hobnailed boot. Many was the time Mary had witnessed him crashing his foot down with enough force to raise sparks from stone, as he tried to destroy the fiend below.

There are seven kinds of beastly drunk: Swine, who sleeps and pukes, Sheep, who cannot speak, Martin, who drinks himself back sober, Goat, who is lascivious, Fox, who is crafty, Ape, who leaps and sings, and Lion who is quarrelsome. Daniel was a combination of Ape and Lion.

It was Mary’s own fault. She had spoiled him as a wee boy because of his infirmity and now, as a huge man, he still bore the imprint of that indulgence.

His hulking form emerged from the shadows as he dragged out some large freight cases, still marked with the name of the ship, the
Dorabella
, which he began to pile up in the middle of the floor, whilst singing jaggedly under his breath,

Up stairs and doon stairs, in his nicht gown.’

It is doubtful if Daniel knew that in some Jacobite songs, Willie Winkie was supposedly the nickname of William III, but he crashed a last wooden crate into position to compensate for any lack of learning, and let out a bellow which echoed on and on in the emptiness of the building.

‘Mammy. I have it all in hand! Bring me my tools of trade!’

‘Can ye no’ be quiet?’ she admonished. ‘D’ye want the world tae know?’

A wild laugh came in response. The whisky may have calmed his nerves for a while, but now they were breaking loose again. It was always so when he came to this point, for he both loved and feared the fire.

The House You Pass on the Way by Jacqueline Woodson
Conall: The 93rd Highlanders, Book Two by Samantha Kane
The Fire's Center by Shannon Farrell
Small Wars by Sadie Jones
The Tailgate by Elin Hilderbrand
Mumbersons and The Blood Secret, The by Crowl, Mike, Celia Crowl
Obsessed by Devon Scott
A Thousand Stitches by Constance O'Keefe
My Juliet by John Ed Bradley
Stowaway by Becky Black