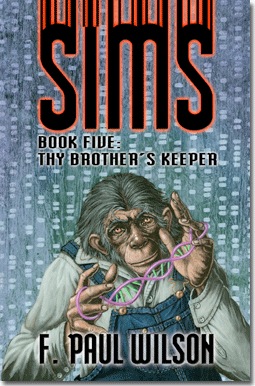 “You’re
sure we’ve got the right address?” Patrick said.

He
and Romy stood before a dilapidated five-story
Alphabet
City
tenement that leaned on its neighbor like a
drunk against a lamppost; a rusty fire escape laced its sooty bricks and
sootier windows.

He’d
figured Alice Fredericks was poor, but not this poor.

“Let’s
see.” Romy checked the number on the door atop the crumbling front stoop
against the paper in her hand. “Yes. This is what she wrote down. She’s in
apartment 2D. I hope she’s in.”

Patrick
had called
Alice
’s number three times this morning to make
sure she was home before they made the trip. Whoever had answered the hall
phone told him—with growing annoyance because he said he was waiting for
another call—that “the crazy bitch ain’t answerin her
door.
”

Patrick
rubbed his cold hands together and envied Romy’s cleathre coat. The weather
wasn’t going to let anyone forget that today was the first day of winter. Near
noon
now but the sun hung low as a cold wind
knifed down the nearly empty street.

Cold as the knot of tension in his chest.
He looked around.
Parked cars lined the curb; if anyone was lurking in one of them, watching,
readying to spring, he couldn’t tell. Only an occasional driver passing on the
street glanced their way—Romy tended to draw looks—but no one seemed unduly
interested. He’d kept watch during the cab ride over and hadn’t noticed anyone
following.

“This
is all a waste of time, you know,” he told her. “She may have had a child at
one time, and she may even have sold it, but—”

“Not
just a child, according to her,” Romy corrected him.
“A sim.”

“Oh,
right. How did I leave that out? A baby sim she says was the result of
fertilization by aliens.” He shook his head. “Who’s crazier—her, or us for
coming here?”

“Whatever
she gave birth to, we know she didn’t sell it to Mercer Sinclair, and we know
she doesn’t have a SimGen check signed by him.”

“Because
it will nag at me if I don’t check it out. That’s why I’m here on my lunch
hour. I don’t want to keep wondering if maybe she’s only ninety percent crazy
and ten percent of what she’s telling us is true. And what if that ten percent
puts us on a path to ‘surge’? The
Idaho
license plate on that truck led to
Manassas
, didn’t it?”

“Point taken.”
But Patrick doubted very much they’d score
anything useful here. “Okay, let’s get this over with.”

He
took the front steps two at a time, pushed on the front door, but it was
locked. She’d said she was in 2D; he found the 2D bell button, but it was
unlabeled. He pressed it anyway. No buzzer sounded to unlock the door.
Tried again, but still no response.

He
turned to Romy. “Are you getting a bad feeling about this?”

“You
mean that we might not be her first visitors since she left last night?”

Just
then the door swung open and an anemic-looking splicer
goth
,
twenty something and all in black, stepped out. She hissed at him, revealing a
pair of long, sharp vampire fangs—the real
thing,
he
was sure—then flowed down the steps, trailing black lace.

Patrick
caught the door before it latched closed again, and held it for Romy.
“After you.”

Feeling
his neck muscles bunch, Patrick took one last look at the street, then led the
way up the worn stairs to the second floor where they found a narrow hallway
lit by low-watt bulbs in steel cages and smelling vaguely of urine.

He
noticed that she had her hand inside her bag. “What’ve you got in there?”

“Something
I hope I don’t have to use.”

Listening
for a click, a creak, anything that might herald an opening door, he led her to
the right, past the hall phone framed by scribbled names and numbers. Finally
they reached 2D. Patrick took a breath and knocked on the peeling surface. No
answer. He tried again, louder.

He
pressed his ear to the door and thought he heard a rustling sound within, but
couldn’t be sure. Tried to look through the peephole but
couldn’t
see a thing, not even light
.

“I
don’t like this,” Romy whispered. “I told her we’d be here today. What if…” Her
voice trailed off as she frowned.

Patrick
knew what she was thinking. He’d been thinking it too. “You mean, what if she’s
been talking too much about this check and someone finally decided to shut her
up for good?”

“
Which would mean she wasn’t crazy after all.
”

“We’ve
got to get in there.” He lowered his voice further. “What if it’s all a set
up?”

Romy
chewed her upper lip. “Maybe we should call the cops. Report her as a missing—”

The
door suddenly swung inward, a hand darted out, grabbed the lapel of Patrick’s
overcoat, and pulled him inward. He stifled a terrified cry when he recognized
Alice Fredericks.

Patrick
stepped through, Romy right behind him.
Alice
slammed the door as soon as they were
inside, plunging them into darkness. He could make out glints of light from
what seemed to be a window, but she must have left her shades down.

“
Alice
,” he said as his pounding heart slowed.
“What’s going on? Can we have some light?”

Rustling
clothing, shuffling feet accompanied by a strange crinkling noise, and then a
lamp came to life. Patrick barely recognized
Alice
. Her gray hair was in wild disarray, her
feet bare, her frayed housecoat haphazardly buttoned. And her eyes—red,
swollen, wet…

The
words dried up as his brain began to register his surroundings.

Patrick
did a slow turn, his feet crinkling on the aluminum foil that lined the floor.
And the walls.
And the ceiling.
And the two windows on the outer wall, which was why the one-room
apartment was so dark.
In some areas, the ceiling especially, the foil
looked as if it had been collected from trash cans—minutely crinkled, in
odd-sized squares, some with fast-food logos showing; other areas were covered
in long smooth strips, obviously tacked up right off the roll.

“What?
Oh, you mean the foil. That’s for protection.”

“From
having my mind read. The aliens working for Mercer Sinclair can read thoughts,
you know. This protects me from them. At least…” Her voice faltered as her face
twisted into a mask of grief. She sobbed. “At least I thought it did!”

Romy
stepped closer and slipped an arm around the woman’s quaking shoulders. “What’s
the matter,
Alice
? What happened?”

“You
mean,” Romy said, “someone broke in here and took it?”

“Yes!
They knew my secret hiding place and they switched it with another check, a worthless
one!”

Romy
glanced up at Patrick and shrugged.

“Let’s
go,” Patrick said. He wanted to be angry at this flaky lady for wasting his
time, but she was too genuinely distressed. Her bizarro apartment, though, was
giving him a grand case of the creeps.

“We
can’t leave her like this. She’s terrified.” Romy turned back to
Alice
. “When did you last see the check?”

“Oh,
I haven’t taken it out for years. But after talking to you last night, I pulled
it out of my secret hiding place, to have it ready for Mr. Sullivan, and it had
changed!”
Another sob, louder this time.
“The date’s
the same and the money’s the same, but it’s not a SimGen check anymore and
someone else’s signature is there instead of Mercer Sinclair’s!” She fumbled in
her housecoat pocket. “Here. I’ll show you.”

“Romy…,”
Patrick began but her quick sharp look cut him off.

Alice
produced a slip of paper and shoved it into
Romy’s hand. “There. See for yourself!”

Patrick
saw Romy glance at the check, then take a closer look.

Romy
angled the paper back and forth in the dim light. “Well, it’s for five thousand
dollars and it’s made out to Alice Fredericks. And she’s right about the
signature: I don’t know whose it is, but it’s not Mercer Sinclair’s.”

“I’ll
bet she’s also right about it not being from SimGen too.”