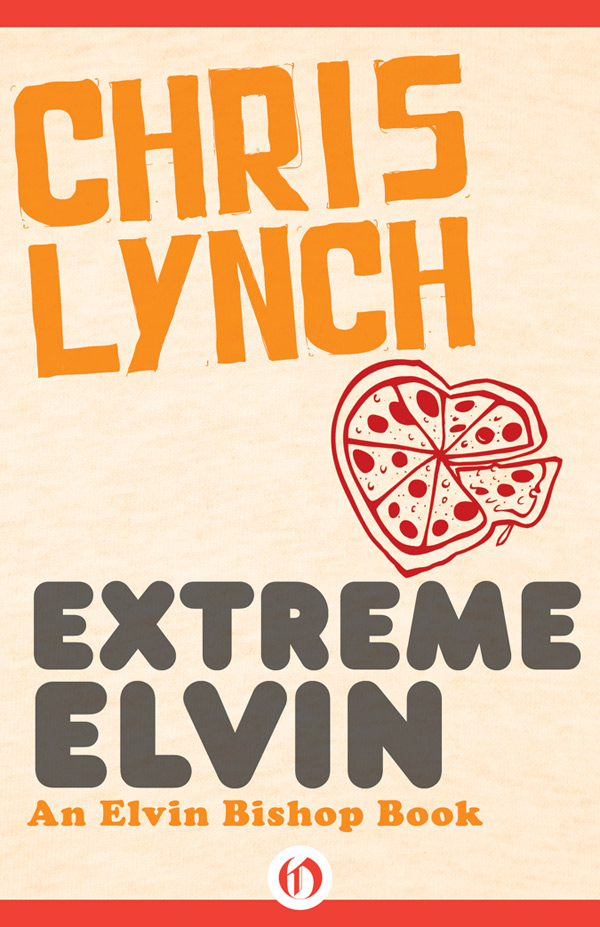 This Book is For Walker and Sophia

See Me, Feel Me Infect Me, Heal Me

All the Wrong Places

Love Mites in the Air—Part One

Blame It on the Dogs

Preview: Me, Dead Dad, and Alcatraz

S
O, HOW MANY RELATIONSHIPS
is a person supposed to be able to manage anyway?

And that’s the first thing right there, isn’t it?
Relationships.
Hell. I never had any relationships before I hit fourteen.

But now I’m fourteen. Everything changes. Even the language. Now I’m high school age.
Teen.
Cripes. I was, technically, a teen when I was thirteen, because I could hear it in there—
thirteen,
see—but apparently that was different. I was really thirteen. Now I’m A Teen. Very different animal, apparently. Young adult. You know
that
one was dreamed up by an old adult. All I know is nobody consulted me.

I used to have a mother, and a friend, and another friend, and... well that’s about it. Now I got relationships.

Still have Mom. She’s cool. Quick with a joke and to light up my smoke and all that. Sometimes a little nutty, sure, but she is the best in the world at her version of the mom thing. Of course, I don’t think anybody else practices her version of the mom thing, so she’s got very little competition. If I could manage having more than two friends, it is possible I’d give her the third slot. But don’t repeat that.

Still got the two, though. The original equipment. Could do better, probably, but I’m lazy is what it is. That’s why I’ve had the same two friends forever. Friend One, Mikie. Friend One-A, Frankie. Been through everything together. Kid stuff mostly, but it seemed like a lot at the time.

Who’m I kidding? It seems like a lot now, too.

And the kid stuff held together, even when it started looking like we weren’t going to get to be kids anymore. We were like one organism, the three of us, as we went from grade school to high school, never actually talking about it, never mentioning the hundreds of choices available across the city. Don’t know who decided on this joint first, but here we are, again in the same place, with no evidence of who followed whom.

Then there was even this little summer test camp for us, to break us... break us
in,
I mean... before we actually came to school in September. It was kind of a horror show that taught us a lot about what to look out for in the next four years but really, in the end, turned out to be more about
us
—me, Mikie, and Frankie—with a lot of other players shuffling in and out of the game.

That’s a thing right there. Other players shuffling in. Seems like it can’t be simple anymore. And for the first time ever, I know I don’t want it to be.

Which brings me to the one more thing, and brings me to now. Relationships. What happens to what you’ve got, when you get all this more?

“Why are you sitting like that, Elvin? Sit up straight.”

“What?” I sat up straight. Straight hurt. I leaned a little to one side again. “What, Ma? Sitting like
what?
I’m sitting fine. Maybe I’m up straight and
you’re
slanted.”

She continued slicing perfect banana coins onto my Special K from over my shoulder, then went to the counter and came back with a saucer. On the saucer were seven apricots arranged in a circle around the center ring. A beautiful overripe apricot-blossom flower.

“I’m not eating those, you know.” I looked so I was viewing her face-on and serious—and upside down and backward. “I don’t care if you arrange them in the shape of flowers, or animals, or airplanes... you can even shape them like
food
if you want. ...”

“You know, if there is something making you sit sideways like that, it probably would be good to tell me.” Would that be a smile on my ma’s face? Yes, I believe it would.

Oh, she heard me all right. She was well aware that I wanted to talk about something else. She’s fairly brilliant at playing a kind of verbal kung fu with me when she wants to talk and I don’t. Fortunately, I, and only I, am more than a match for her.

“I said, no apricots, lady. Take them away.”

“Maybe I do, maybe I don’t. All I’m saying is, I’m not having them.” I straightened up, picked up the saucer, and balanced it on the tips of my fingers, waiting for her to come up from behind and take it away.

She came up from behind, took one off the plate, and tucked it neatly into my mouth before I could react. I’ve got to stop leaving my mouth hanging open all the time.

“Maaa,” I said quite clearly and angrily even though I was chewing. Everything sounds like
maaa
when you’re chewing.

“I’m sorry, but you know how it works: If you want bananas, or cheese, or anything binding...”

I swallowed the thing without even chewing sufficiently. “All, right, all right, I think that’s enough—”

“Oh, is that it? This is what I’ve been waiting for all these years? This is what adults talk about that I could never hear before?
Binding?
Jeez, if I knew this, I would have grown up a lot quicker.”

See, now, if nobody intervened, this could go on forever. Because this is the key to Bishop family communication:
Not.
Not, is the key. With my mother and myself only one of us at a time ever seems to want to get at something. So it’s a tail-chasing competition of one of us asking questions and the other thinking up clever and thrilling ways of not answering the questions.

Except, in the end, we always seem to have gotten at something, somehow.

She sat down across from me. “Why are you sitting that way?” she asked as she chewed a knuckle.

Thank god Frankie screamed for me from the sidewalk.

“Gotta run, Ma. Go ahead and finish my apricots for me.”

“We’re going to talk about this later, Elvin.”

I kissed my mother on the cheek. “That’ll be swell.”

“Don’t kiss me on the cheek. And don’t say swell to me ever again or I’ll wash your mouth out with Mr. Clean.”

No dope, my ma. She knows when she’s being mocked.

“Look at the way you’re walking,” she said as she watched me from behind. “What kind of walk is that?”

“What kind of walk is that?” Mikie asked as he and Frankie watched me approach.

“What is it with everybody today, I gotta have a name for my walk? Okay, this is my Tuesday kind of walk.”

“No, there’s something wrong with you,” Frankie said, as we headed down the block toward the bus stop.

“Listen, I just finished getting tough with my ma. You want a piece of that, huh?” I sounded so tough I was scaring myself. It was the affliction getting to me.

I was the only one I was scaring though. The boys persisted. They are persistent boys. Like I said, they have been my friends forever, and being my friend brings along with it an urge to fix me. I’m a fixer-upper, and these guys are show houses.

But if I did hate ’em, you couldn’t blame me. Frankie’s handsome like a Greek statue only with more color and mouth and hair. And he’s got this oozy charm thing that would make you sick if you could resist it, which nobody seems able to do. And Mikie—whom we call Dad because he’s so mature and sensible and all that crap—is, like, the guy who fits in every picture. He could fit, for example, with the poindexter crowd, hang around and talk with them and not fall on his face even though he’s got no poindexter in him. He could then walk away from that bunch, head into the gym, and join any pickup game of basketball that might be going on. He doesn’t dominate a game, but he’s always a
player.
Never picked lower than third. There have been times when he was picked twice, once by each team, while I was still sitting there totally, embarrassingly, available in the talent pool.

Because. I got to them before the world did. So they are different to me.

Which doesn’t mean they still don’t want to fix me from time to time.

I paused, winced, looked in every direction, including the sky for eavesdropping UFOs, then I whispered its name to my nearest and dearest.

“Hemorrhoids?”
Frankie squealed. His immediate reaction was amused; then he got all philosophical, trying to work this out. “How do they know who to go to? I mean, like, hemorrhoids and bald spots and lazy eyes and stuff. They never go to somebody like me. They always go to...”

“Shut up,” I snapped. Understand, if he was
trying
to insult me, I wouldn’t have been so upset.

Which explained it. Mike is a very sympathetic soul—who was a little short on information at the moment.

“What am I
doing
with them, Frank? What am I
doing
with them? Oh, well, I’m doing what everybody does with them. They’re like a hobby, y’know. Like being a Trekkie or a marble collector or something. We go to conventions and stuff and compare. ‘Say, whatcha got there?’ ‘Oh, I got a couple aggies and a pinkie and a big ol’ cat’s eye. Ain’t she a beaut.’ That’s what I’m doing with them, Frank.”

Mikie squirmed, winced.
Now,
he got it. Frank gave me a disgusted look.

We mounted the bus and, as usual, Frank left us and went straight to the back to hook up with his boys. He could still spend some of his time with us, as long as he paid due attention to the licking of appropriate boots, and having his own licked by kids even more popularity-conscious than himself. Frankie was in a different social slot from me and Mike now. Earned himself some stripes. After the school’s summer camp, he was a made man, and made a big deal out of it.

I was there, though.

And I’ll keep my Mr. Nobody social rating, thanks anyway.

Mikie and I slipped into seats midway down, joining the rabble. We sat across the aisle from each other. There was somebody taking up every window seat.

“So what are you gonna do about it?” he asked discreetly.

“First thing I’m gonna do is I’m gonna ask you to take that look off your face,” I said.

He looked like he was sitting in a bathtub filled with cold potato-leek soup.

Mikie shook his head thoughtfully. “You know what everyone’s gonna say right? You know what they always say at a school like ours, when a guy gets—”

“All right, I know, I know. I read the walls like everybody else. But I really don’t need that kind of popularity.”

I opened my hands, and my face, to my good friend. “And you’re the guy who’s
helping
me, is that right?”

Herodias by Gustave Flaubert
The Next Sure Thing by Richard Wagamese
Mausoleum by Justin Scott
Through the Eyes of a Male Submissive by Lea, Andie
Back to the Fuchsia by Melanie James
The Pineview Incident by Kayla Griffith
An Ember in the Ashes by Sabaa Tahir
The Rake and The Rose (A Rake's Mistake) by Clearwater, Amelia
Duck & Goose, It's Time for Christmas! by Tad Hills
Far After Gold by Jen Black