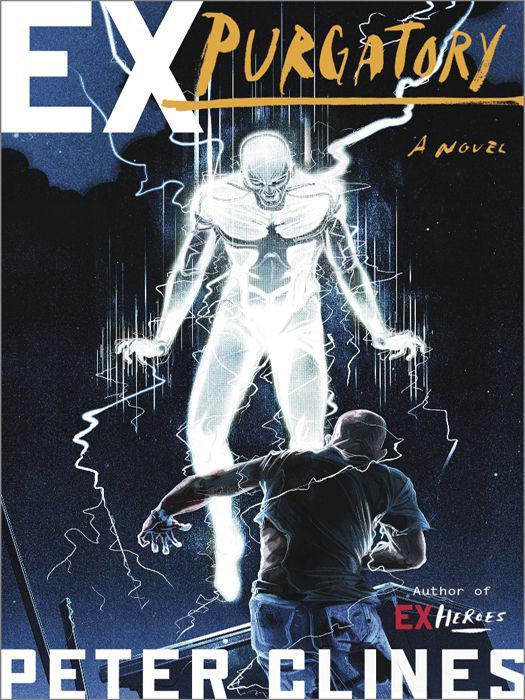 ALSO IN THE EX SERIES

All rights reserved.
Published in the United States by Broadway Books,
an imprint of the Crown Publishing Group,
a division of Random House LLC,
a Penguin Random House Company, New York.
www.crownpublishing.com

Library of Congress Cataloging-in-Publication data is available upon request.

SYLVESTER TAPPED HIS
pencil on his knee. He did it like a drumroll, so the sound was sharp against his jeans. He always had a pencil, even though she couldn’t remember him ever using a notepad. Three months now, a dozen sessions, and he’d never taken one note.

He was bald, but she was pretty sure he shaved his head. It made it tough to figure out how old he was. His tight goatee came to a perfect point under his chin. He had dark brown eyes, and his eyelids hung low. It gave him a relaxed, thoughtful appearance.

Sylvester stopped tapping the pencil, leaned back in his chair, and gave her a look. “How are you sleeping?”

She shrugged. “Same as always.”

Her fingers danced on the arm of her wheelchair. “I don’t like the mask. If I try to do anything except sleep on my back it pulls at my head or leaves marks on my face. And it doesn’t fit right. Air leaks out and blows over my eyes, so they’re always dry when I wake up.”

She shook her head. “No. I mean, the whole thing only started a while ago. Near the end of senior year.”

“Have you tried different masks?”

“Yeah. Dad tried altering them, too. It doesn’t make any difference.” Her lips twisted into a weak smile. “I think I’ve got a funny-shaped head.”

“It looks fine to me,” he assured her.

She blushed. Just a little. “Thanks.”

“You understand why you have to wear it, right?”

“Didn’t we go over all this ages ago?”

“We did,” said Sylvester, “but I want to see if your answers have changed any.”

She shrugged again. “It’s keeping me alive. The doctors—the other doctors—they say I stop breathing as soon as I fall asleep. The first couple times it happened they were pretty sure I’d died in my sleep. Severe sleep apnea.”

“One of the worst cases on record,” he said.

“Yup. Mom gets worried whenever I stay up late because she’s worried I’ll nod off in class and asphyxiate.”

“That’s not really an answer.”

“No, but nobody knows that.”

He tapped the pencil three times on his knee, then a fourth. “Are you worried how the mask’s going over at college?”

Sylvester had covered one side of his office with black-bordered motivational posters. She still wasn’t sure if it was serious or a joke to make people lighten up. “A little bit,” she admitted after a minute of poster-studying.

“That’s the whole point of this.” The pencil tapped twice for emphasis.

“I always wonder if everyone thinks I’m some kind of freak,” she said. “Every study session, every party, every late night hanging out, I’m always the girl who has to get back to her room and strap this thing to her head before she falls asleep. And how’s that—” She looked back at the wall of posters and stared at one marked
Desire
.

She glanced at the office door, toward her mother in the waiting room. “What if I meet a guy?” she asked. “What if I meet someone and things are going great? The chair’s bad enough, how do I tell him, ‘Oh, we’ve got to do it in my room because I’ve got to make sure I strap on my Darth Vader mask before I fall asleep or I’ll probably die’? What guy wants to hear that?”

Her mouth twitched into a smile for a moment. “It’s one of them.”

He took a long, deliberate look of his own at the door, at her mother in the waiting room. “I probably shouldn’t tell you this,” he said, turning his gaze back to her, “but I don’t think you need to worry about guys in college
not
wanting to have sex. Even if you have to strap on an oxygen mask afterward.”

She blushed again. “I just think it’s going to be weird.”

She turned back to the wall of posters.

He let the silence stretch out between them for a minute. Then he rapped the pencil on his knee once. “You’re still having the dreams?”

She stared at the posters, then at her hands. He let her sit for a moment before he asked again. She nodded once. “Yeah. Every night.”

She straightened up as best she could. “Not always. Sometimes I remember different parts of it. Different places, different people. But it’s all the same. It’s all …”

He tapped the pencil one-two-three-four times. “It’s all what?”

“It’s important for you to say it,” Sylvester said.

“Because how you remember things and how you describe them are little clues to what’s going on in your head.”

She sighed. “It’s all real,” she said. She waved her hand around the office. “The stuff in my dreams feels more real than all of this.”

The pencil rapped three-four-five-six times against Sylvester’s knee. “Your parents think it’s because of this obsession you’ve developed with horror movies.”

“I told you, the dreams came first.”

“That’s not what they say.”

“They saw the movies first. I didn’t tell them about the dreams until later.”

The pencil spun twice between his fingers, then tapped against his knee. “And they’re still suicidal dreams?”

“If the dream is so realistic, how can you be dead? How are you experiencing it?”

She shook her head. “No, not like that. I’m dead, like a vampire or something. But I’m different than the others.”

Sylvester’s pencil paused in the air between taps. “Okay,” he said. “Let me ask you this. In these dreams, can you still walk?”

“So, you’re having a dream that feels incredibly real where dead things walk around. And in this dream your legs—which have been ‘dead’ for ten years now—work again.”

“I have heard of it once before,” he said. “Something a lot like it.”

“It was in a movie. You’ve been watching a lot of horror movies, right?”

“Did you ever see one called
Nightbreed
?”

She thought about it and shook her head. “I don’t think so.”

“It might be before your time. It’s an older one by Clive Barker.”

“I met Pinhead at a convention in Seattle last year,” she said. “The guy who played him, I mean. He was really nice, even though he seemed pretty bored.”

“I think he’s in this one, too.” Sylvester drumrolled his pencil against his knee. “It’s a film about a man who has dreams he’s dead, and then he ends up becoming one of the undead. And parts of him that had stopped working start working again.”

“That’s good,” he said, smiling. “The psychiatrist in that one turned out to be a homicidal maniac.”

She paused and weighed the question. “Lots of people I know are in it.”

He tapped the pencil against his knee two-three-four times. “So, if I’m not a maniac in the dream, what am I then?”

She stared at her legs for another moment. “You’re dead,” she told him. “Everyone is. The world is dead.”

“Ahhh. A virus that made the dead walk?”

“Yeah.” Madelyn bounced her fist on the arm of the wheelchair, breaking the beat of the pencil tap. “And I don’t know why it’s all different now.”

I’m not sure where I’m falling from. That’s not part of the dream. I just find myself plummeting through the air toward the crowd below.

The crowd looks up at me. Men and women, young and old. It just seems to be random people. They’re all talking. I can see their mouths moving but can’t hear any words. The dream is silent.

My body tenses up as the ground flies up to meet me, but at the last minute I slow down. It’s like coming to the end of a dive in a deep pool. My body just sheds momentum into the air. I step down onto the pavement as if I’m hopping off a bus.

The crowd surrounds me. They’re all still talking. I still can’t hear them.

No, not a crowd, a mob. A horde. They claw at me. Grab at me. Tug and pull and yank. One of them has my hair, because in the dream my hair is long and shaggy, like the hero on the cover of a romance novel. A pair of arms wraps around my neck like a bony scarf.