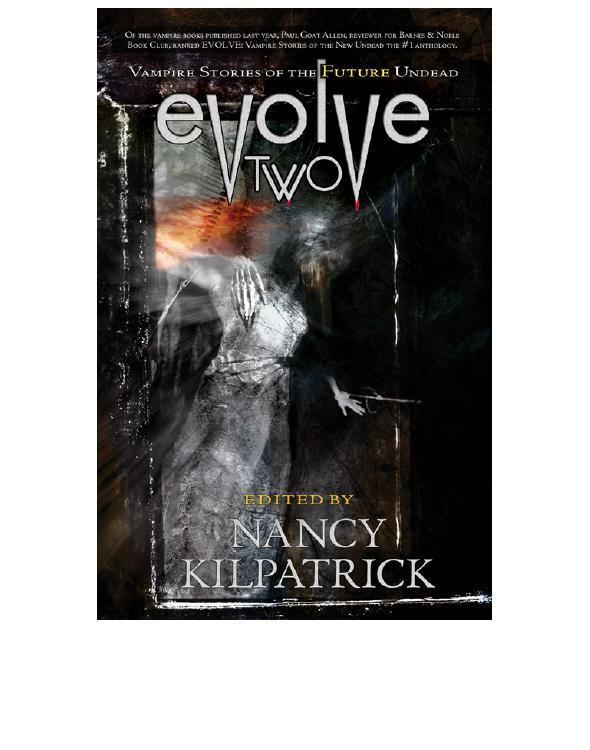 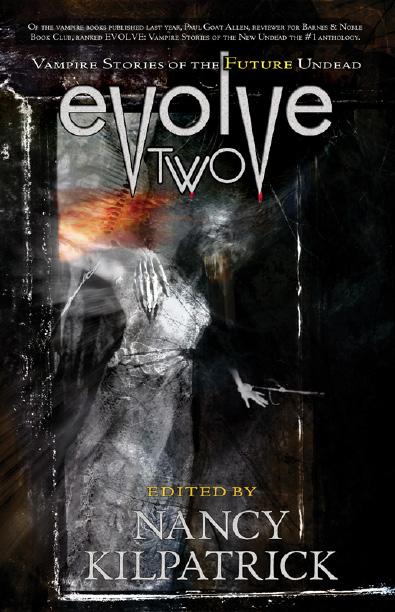 Vampire Stories of the Future Undead

This ebook is licensed for your personal enjoyment only. It may not be re-sold or given away to other people. If you would like to share this book with another person, please purchase an additional copy for each reader. If you’re reading this book and did not purchase it, or it was not purchased for your use only, then please purchase your own copy. Thank you for respecting the hard work of the author(s).

This book is also available in print

The editor would like to acknowledge the invaluable emotional support of her friends who have, as always, gotten her through tough times, including several recent losses. She appreciates the numerical help supplied by William Greene Raley, her math major Mensa friend, who may or may not be a vampire! The brilliant artwork of John Kaiine gracing the cover perfectly reflects the contents—thank you John! To the staff at EDGE for all the hard work they put into creating and promoting beautiful books they can be proud to have had a hand in producing. And a special, grateful nod to Brian Hades, publisher of EDGE Science Fiction and Fantasy, for, once again, being open to a different sort of anthology, for getting behind it in so many ways, and for giving this vampirophile yet another chance to explore one of her many dreams.

I’m asked that question a lot. I’m asked because I’m a writer and an editor and vampires have managed to infiltrate a fair chunk of my work. And I’m asked because I’ve been a collector of vampireobilia for thirty years and know quite a bit about the undead. Everywhere I am, when the nosferatu takes center stage, either in book, film, visual art or music form, I’m asked, especially at Halloween!

Once that ‘Why?’ question evaporates like a mist, it’s quickly followed by further why questions, for example: why are these creatures of the night rearing their fanged heads so often these days? And: why would anyone find a vampire attractive — what in the world is there to be attracted to?

Please bear with me. I’m going to wax a tad esoteric for a moment about the first ‘why’, the proliferation of the nosferatu, then (hopefully gracefully) ease gently into the second ‘why’, their attraction.

Psychologist Carl Jung coined the term ‘archetype’. It’s one of those hundred dollar words that sounds educated and sophisticated so, once the media got hold of it, the word was bandied about quite a bit over the last couple of decades. Consequently, the original meaning has been seriously diluted, if not polluted.

Today, when many people use the word ‘archetype’, what they really mean is ‘stereotype’. Most of us know that stereotypes are boring. Not to mention unfair. Nobody wants to be seen as a stereotype. It’s ridiculous to lump together people or situations and say they’re all the same, with no variations.

A stereotype is
not
an archetype. In fact, a stereotype is a
dead
archetype, one with the life sucked out (sounds like a vampire’s victim!). An archetype is the original, a vibrant energy that is a pulsing template on which whatever comes after is formed. It’s the spirit of the original. All that follows and emulates the original incorporates that spirit and is like it but also unique.

So, what does that mean when it comes to vampires? Picture this, if you can: If we took all the vampires that have ever existed in legend, mythology, literature, film, television, music and art and piled these thousands upon thousands of undead beings atop one another — (yeah, that’s quite an image!) — what we would find is the one thing they all have in common. Each is different but there’s a common thread in all of them and that thread is the archetypal vampire. What is the vampire archetype? Simply put: Vampires are predators; we are their prey.

And yes, even the sparklies like Edward Cullen can turn into a predator at any moment; it’s in his nature, the nature of the vampire. No matter how polished and presentable the undead, our fear of their dangerous side is always percolating, as it should be, and the fear is also part of the allure.

According to Jung, archetypal energies kind of float around in our personal and collective unconscious, not doing much, just hanging out. Every archetype, including the Vampire archetype, has both a positive and a negative side and these powerful energies are eternal, shared by all humanity, although different cultures may ascribe different cultural traits to an archetype. We know that humans down through history have been aware of the vampire. The earliest writing, the Sumerian
Epic of Gilgamesh,
which dates to 2500 BC, is the first record of the death-bringer.

At least since then, the vampire has been lurking. Legends and folklore from many parts of the world talk about the vampire. We read about them in early English and French literature, we viewed them in German, British and American films from the silent cinema days, joined more recently by movies from Mexico, France, the Philippines, Russia, from all over the world. In one capacity or another vampires have appeared on our television screens through the 1950s, 1960s, 1970s and onward. There is no shortage of art and music, board games, breakfast cereals, dolls, jewelry, and on and on. Everywhere we look in the present and the past we see the vampire.

Jung discovered that these floating archetypal energies only surface in our awareness when something triggers them. When many people become aware of an archetype, it says that collectively we are bringing this energy out into the open for a reason. Something is up.

We all know that the vampire has become a big deal over the last few decades. We mortals are finding immortals
very
interesting indeed. We need something from them and, at the same time, we fear them. It’s a paradox.

The current surge in their popularity started in the mid-1970s when several important books were published that shaped the vampire for modern readers and influenced film and television, art and music:
Interview with the Vampire
(Anne Rice);
Hotel Transylvania
(Chelsea Quinn Yarbro);
The Dracula Tape
(Fred Saberhagen);
Salem’s Lot
(Stephen King). With the exception of King’s novel/TV miniseries, these books presented the vampire in a new and evolving light. The vampire was more human, lived among us (although back in those works from the 1970s, that bit of info was known to only a select few fictional characters); and the vampire did not necessarily
always
have an evil intent.

That perception of the undead has grown and expanded. Today, nearly forty years after those ground-breaking novels, we have undead that not only live among us, but are a known entity, part of society. Some are bad asses, of course, but not all. And generally, they’ve grown more human and less feral.

What we as a species need from the vampire might be tied in with how we have allowed — even encouraged — the undead to evolve. The biggest question is: why did we want to humanize the vampire? Why take what is essentially ‘other’ and try to understand and then accept this non-human, supernatural force that is so threatening. Surely this goes against the traditional Homo sapiens distrust of ‘other’, the desire to defend ourselves and our loved ones from the unknown which is potentially threatening. And maybe that’s the key to understanding why we want this creature which has always been loathsome to integrate into our world. It’s almost as if there’s a silent revolution on the go. What had previously been intolerable is now welcomed. We see that with a lot of groups; over the last decades, categories of people that were ‘out’ are now ‘in’, participating in society, winning their rights, which says that overall our species is more accepting. Despite the wars of today and the fear of those who are not like us and may even harm us, there seems to be almost a quiet but steady drive underway to accept what could not in the past be accepted. Our global village now includes vampires.

The vampire traits that we’re all familiar with give a clue to why we find the undead an attractive lot and why we need them to evolve along with us. Vampires:

1. live forever, or at least more than one lifetime, but certainly long enough to gather some smarts so they can avoid the dumb mistakes we mere mortals seem hell-bent on making;

2. are youthfully gorgeous — despite not being able to see themselves in mirrors — and stay attractive
sans
Botox, or I should say they have
become
attractive in the last several decades — first we had to get rid of those old-school smelly, resuscitated corpses;

3. have no problem finding ‘dates’, to employ a euphemism. Their sexual charisma is legendary. What high school senior wouldn’t love to take a vampire to the prom;

4. don’t have to work. In fact, they are often wealthy, having managed some savvy investments over the centuries;

5. are physically powerful and mentally mesmerizing, and they refuse to play by normal human rules and regulations — unless they want to, of course. They’re good manipulators, and this power in its myriad forms comes in handy when they fall outside the boundaries of behavior expected by mortals which, it seems, they do frequently.

Naturally, there are a few drawbacks to their existence, but the spin on those has changed too. Vampires:

6. traditionally sleep in a coffin and sometimes that casket must contain soil from their native land. More often today, though, they retire on satin sheets in darkened chambers that reek of opulence and/or edginess;

7. can be fried crispy by sunlight and are weakest in the daytime. But lots of humans are night people so a moonlit lifestyle isn’t all that strange, especially for the young and palely attractive (see 2 and 3);

The Price of Winning: London Calling Book Four by Kat Faitour
The New Male Sexuality by Bernie Zilbergeld
Under the Lights by Shannon Stacey
Surrender at Dawn by Laura Griffin
Stunt by Claudia Dey
Rollover by James Raven
Secrets of the Heart by Candace Camp
A Battle of Brains by Barbara Cartland
The Healer by Antti Tuomainen
A Long Time Until Now by Michael Z Williamson