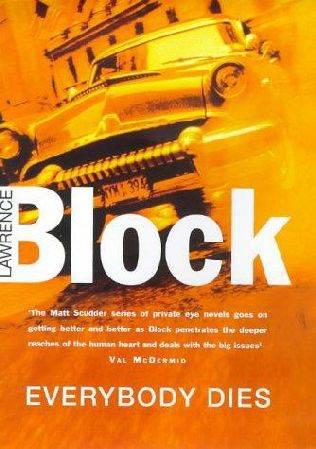 Annotation
Matthew Scudder is finally leading a comfortable life. He's sober, he's married, and the state just gave him a private investigator's license. He's growing older, and he's even getting respectable. Then Scudder signs on to help his closest and most unlikely friend, the larger-than-life Hell's Kitchen hoodlum Mick Ballou. And all hell breaks loose. Scudder finds out he's not so respectable after all. He learns the spruced-up sidewalks of New York are as mean as they ever were, dark and gritty and stained with blood. And he discovers he's living in a world where the past is a minefield, the present is a war zone, and the future's an open question.
Lawrence Block
Everybody Dies
Matthew Scudder 14

From too much love of living,
From hope and fear set free,
We thank with brief thanksgiving
Whatever gods may be
That no life lives forever;
That dead men rise up never;
That even the weariest river
Winds somewhere safe to sea.
- A. C. SWINBURNE, "The Garden of Proserpine "

Everybody dies.
- JOHN GARFIELD in Body and Soul

At the door of life, by the gate of breath,
There are worse things waiting for men than death.
SWINBURNE, "The Triumph of Time"

I took my turn and Mick took his. Halfway through it he leaned on his shovel and sighed. "I'll feel this tomorrow," he said. "All this work. But it's a good feeling for all that."
"Honest exercise."
"It's little enough of it I get in the ordinary course of things. How about yourself?"
"I do a lot of walking."
"That's the best exercise of all, or so they say."
"That and pushing yourself away from the table."
"Ah, that's the hardest, and gets no easier with age."
"Elaine goes to the gym," I said. "Three times a week. I tried, but it bores me to death."
"But you walk."
"I walk."
He dug out his flask, and moonlight glinted off the silver. He took a drink and put it away, took up the shovel again. He said, "I should come here more. I take long walks when I'm here, you know. And do chores, though I suspect O'Gara has to do them over again once I've left. I've no talent for farming."
"But you enjoy being here."
"I do, and yet I'm never here. And if I enjoy it so, why am I always itching to get back to the city?"
"You miss the action," Andy suggested.
"Do I? I didn't miss it so much when I was with the brothers."
"The monks," I said.
He nodded. "The Thessalonian Brothers. In Staten Island, just a ferryboat ride fromManhattan, but you'd think you were a world away."
"When were you there last? It was just this spring, wasn't it?"
"The last two weeks of May. June, July, August, September. Four months ago, close enough. Next time you'll have to come with me."
"Yeah, right."
"And why not?"
"Mick, I'm not even Catholic."
"Who's to say what you are or aren't? You've come to Mass with me."
"That's for twenty minutes, not two weeks I'd feel out of place."
"You wouldn't. It's a retreat. Have you never done a retreat?"
I shook my head. "A friend of mine goes sometimes," I said.
"To the Thessalonians?"
"To the Zen Buddhists. They're not that far from here, now that I think of it. Is there a town near here called Livingston Manor?"
"Indeed there is, and 'tis not far at all."
"Well, the monastery's near there. He's been three or four times."
"Is he a Buddhist, then?"
"He was brought up Catholic, but he's been away from the church for ages."
"And so he goes to the Buddhists for retreat. Have I met him, this friend of yours?"

The Chocolate Meltdown by Lexi Connor
The Blood King Conspiracy (Matt Drake 2) by Leadbeater, David
A Window Opens: A Novel by Elisabeth Egan
Celtic Fairy Tales by Joseph Jacobs
Doctor Who: The Romans by Donald Cotton
White Water by Linda I. Shands
Dakota December and Dakota Destiny by Lauraine Snelling
After Dark by Nancy A. Collins
The Last Good Night by Emily Listfield
Giving In by J L Hamilton