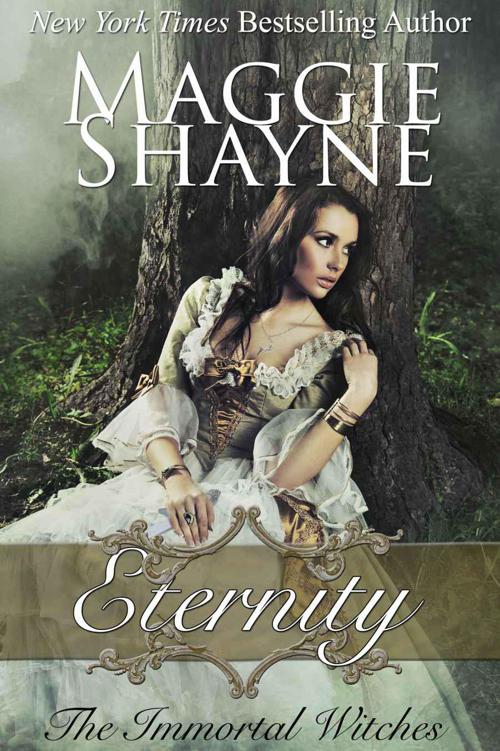 This ebook is licensed for your personal enjoyment only. This ebook may not be re-sold or given away to other people. If you would like to share this book with another person, please purchase an additional copy for each recipient. If you’re reading this book and did not purchase it, or it was not purchased for your use only, then please return to your ebook retailer and purchase your own copy. Thank you for respecting the hard work of this author.

The Witch Upon the Hill

Her eyes are black, the midnight sea,

Her hair, a sooty cloud

Her voice, the winds of fantasy,

I could not help but watch her

As beneath the moon she danced,

She whirled, she cast, she conjured

She sang a mystic chant

She soared into my soul that night

The starry sky her wings

She whispered secrets in my dreams

And spoke of sacred things

In my mind, she entranced me

Her touch, it left me trembling,

And craving her embrace

The skies obey her every wish,

The elements, her commands

She wields a power o’er me,

My heart lies in her hands

For her I’d cross the universe,

For her I’d swim the sea,

But what could an Enchantress want

And likely, always will.”

My heart, I pledge, forevermore

To the witch upon the hill

I always knew I was a witch.

The definition of the word has since broadened somewhat, and rightly so, I imagine. Today anyone with the determination to learn and practice the Craft of the Wise can call herself—and deservedly—a witch. But in my time there were no books written to guide a seeker, save the books of the witches themselves, but the grimoires were kept secret. Back then one was only a witch if one was born to, or adopted by, another witch. And even then the young one wasn’t told all of the secrets. Some of them I didn’t learn until much later.

My mother was a wise woman, a witch, and from the time I was very young I was taught the ways of drawing on the power of the sun and the moon and the stars and of nature itself. Above all else, I was taught the importance of keeping all that I learned secret. For the penalty meted out to practitioners of the Craft in those days was harsh. Mother never told me just how harsh. I learned that when I was twenty and one, in a lesson so cruel its memory remains burned in my mind, though three full centuries have passed. And yet it was because of that cruelty that I first set eyes upon Duncan Wallace.

The key to my mother’s ruin was her kindness. My father had died only a fortnight before, of a plague her simple folk magic could not fight. Many lives were lost in our small English village that brutal winter of 1689, and perhaps my mother simply could not bear to see one more death after so much grief.

At any rate, it was Matilda, the sister of my dead father, who came pounding on our door that dark wintry night. Looking startled at Aunt Matilda’s state—wild hair and wilder eyes and not so much as a cloak about her shoulders—Mother drew her inside and bade her take the rocking chair beside the hearth to warm herself. I offered tea to calm her. But Aunt Matilda seemed crazed and refused to sit down. Instead, she paced in agitated strides, her skirts swishing about her legs, her thin slippers leaving damp footprints on our wood floor.

“No time to sit an’ sip tea,” she told us. “Not now. ‘Tis my youngest, my little Johnny, named for my own dear brother who has gone to his reward. My Johnny has taken ill!” She whirled and grabbed my mother, gripping the front of her dress in white-knuckled fists. “I know you can help him. I know, I tell you! An’ if you refuse me now, Lily St. James, I vow–”

“Matilda, calm yourself!” My mother’s firm voice quieted the woman, though only for a moment, I feared. “I would never refuse to help Johnny in any way I can. You know that.”

My mother’s head lowered, and I saw the pain flare anew in her eyes—a pain that sometimes dulled but never died away.

“I tried everything I knew to help Jonathon. But I couldn’t save him,” she whispered.

“Perhaps because you brought the illness on him from the start.”

“Aunt Matilda!” I stepped between the two, forgetting to respect my elders and tugging my aunt’s arm until she faced me, rather than my mother. “You know better. My parents shared a love such as few people ever know, and I’ll not stand by and hear you sully its memory.”

But I rushed on. “No one can bring on such a plague as this, and well you know it!”

“No one but a witch, you mean, don’t you, Raven? Raven. She even named you for some dark carrion bird. Are you practicing the black arts as well, girl?” Aunt Matilda gripped my shoulders, shook me. “Are you? Are you?”

I could only blink in shock and stagger backward, pulling free of her chilled hands. My aunt knew. But how? How could she know the secret that had been only between my mother and me? Even my father had been unaware....

“What makes you say such a thing?” my mother asked gently. “How can you accuse your own sister?”

“Sister-in-law and not by blood,” Matilda reminded my mother. “And I know. I’ve always been suspicious of you and your Pagan ways, Lily. From the time you helped me birth my firstborn and somehow took away the pain. And later, when you nursed me through the influenza that should have killed me. You with your herbs and brews.” She waved a hand at the drying herbs that hung upside down in bunches from our walls, and at the jars filled with philters and powders, lining the roughly hewn wooden shelves. “No physician could ease my suffering the way you did.” She said it unkindly, made it an accusation.

Slowly my mother nodded, her serene expression never changing. “Herbs and plants are given by God, Matilda. Knowing how to use His gifts can surely be no sin.”

“I saw you last full moon.”

The words lay there, dropped like blows, as we stared at one another, my mother and I, both remembering our ritual beneath the full moon, when we chanted sacred words ‘round a balefire at midnight.

“I know you have...powers. And I don’t care if they’re sinful or not. Not now. I need you to help Johnny. If you didn’t conjure this plague, then prove it. Cure him, Lily. If you refuse....” Her eyes narrowed, but she didn’t finish.

“If I refuse, you’ll do what, dear sister? Bear witness against me to the magistrate? See me tried for witchery?”

Matilda didn’t answer. She didn’t need to. I saw her answer in her eyes, and my mother saw it as well.

“You’ve no need of such threats,” Mother told her. “All you had to do was ask for my help. I’ll try my best for your son, just as I did for Jonathon. But witchery or no, I may not be strong enough to help him.”

“If he dies, I vow, I’ll see you hang!” Aunt Matilda lurched toward the plank door, tugging it open on its rawhide hinges. “Gather what you need and come at once. I must make haste back to his bedside.”

She left us in a swirl of snow, not bothering to close the door. I went and shut out the weather, then stood for a long moment, my hand on the door. I had a terrible premonition that the events of the past few moments would somehow change our lives forever. I didn’t know how, or why, but I felt it to my bones. Drawing a deep breath, I turned to face my
mother. I knelt before her, taking her hands in mine, staring up into eyes as black as my own. “Don’t go to him,” I begged her. “You cannot help him any more than you could help Father. And when he passes, she’ll blame you.”

“He is my own nephew,” she whispered. She tugged her hands away, got to her feet, and began to make ready, taking sprigs of herbs from the dried bunches hanging on the wall, pouring a bit of this powder and a bit of that into her special cauldron. The one with the hand-painted red rose adorning its squat belly. She added steamy water from the larger cast-iron pot that hung in the fireplace to the brew.

“We should leave this village,” I pleaded as I worked at her side, measuring, stirring, holding my hands above each concoction to push magical energy and healing light into it. “We should leave tonight, Mother. Our secret is known, and you’ve told me how dangerous that can be.”

“I can’t break my vows,” she said. “You know that. When someone needs help, asks me for help, I am bound by oath and by blood to try. And try I will.” She looked into my eyes. “You should pack a bag and go to London. Take the horse. Leave tonight. I’ll send for you when—”

“I won’t leave you to face this alone,” I whispered, and I flung myself into her arms, stroking her raven hair, so like my own, though hers was knotted up in back while mine hung loose to my waist. “Don’t ask me to, Mother.”

Her mouth curved in the first smile I’d seen cross her lips since my father’s death. “So strong,” she said softly. “And always, so very stubborn. All right, then. Come, let us hasten to Johnny.”

We quickly packed our potions and some crystals and candles into a bag, pulled our worn homespun cloaks over our heads and shoulders, and stepped out into the brutal winter’s night.

But my cousin was dead before we even arrived at my aunt’s house. And we were greeted by a wild-eyed woman who’d once claimed us as kin, and the group of citizens she’d roused from slumber, all bearing torches and shouting, “Arrest them! Arrest the witches!”

Cruel hands gripped my arms, even as I turned to flee. Accusations rang out in the night, and people stood round watching as my mother and I were surrounded, and then dragged over the frozen mud of the rutted streets. I cried out to my neighbors, begging for help, but none was forthcoming. And my heart turned cold with fear. As cold as the wind-driven snow that wet my race.

‘Twas a long walk, the longest walk of my life. The poor shacks of the village fell away behind us as we were pulled and pushed along, and we emerged onto the cobbled streets that ran between the fine homes of the wealthy in the neighboring town. At last we stood before the house of the magistrate himself, trembling in the icy wind while our accusers pounded upon his door.

One of Them (Vigil #2) by Loudermilk, Arvin
Dust on the Sea by Edward L. Beach
Confectionately Yours #2: Taking the Cake! by Papademetriou, Lisa
The Charlton Affair by MJ Doherty
There's Something About Marty (A Working Stiffs Mystery Book 3) by Wendy Delaney
The Pumpkin Thief: A Chloe Boston Mystery by Melanie Jackson
Perfecting Fiona by Beaton, M.C.
Retribution (The Lone Riders MC Series Book 2) by Michelle Betham
15 Seconds by Andrew Gross
In the Crossfire (Bloodhaven) by Lynn Graeme