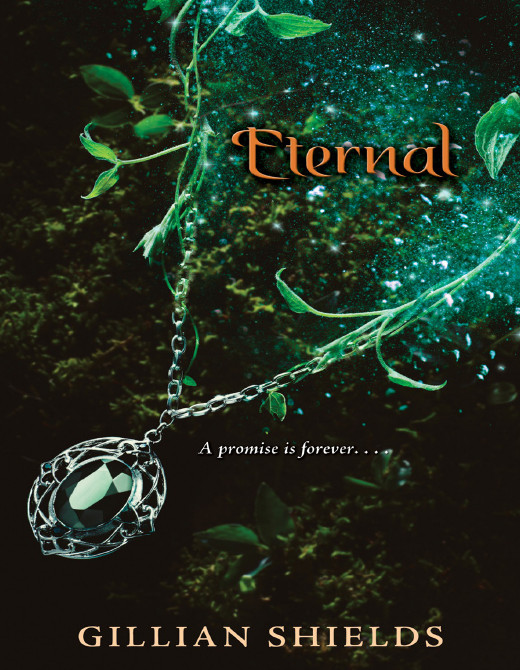 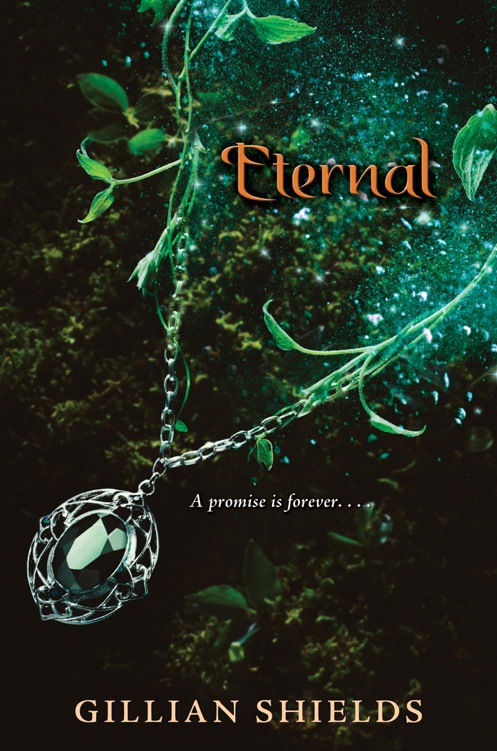 It is the eternal struggle

between these two principles—

And many of them that sleep in

the dust of the earth shal awake

Chapter Thirty-one
About the Author

I am not like Evie. I don’t belong in some great romance.

I’m just the best friend in the background. Always there, always reliable, down-to-earth. Good old Sarah. That’s how it’s always been. Until now.

Now I have to make the hardest decision of my life. To go on or to go back.

I am standing on the hil side above Wyldcliffe. The sun is setting over the wide, wild land. I love this place. I love the wind on my face, and the high cal of the birds, and the deep life and history of these ancient hil s. The rocks that lie like bones underneath the heather and gorse speak to me of power and strength and eternity.

When al this began, I thought I could be like those rocks: a backbone of strength for everyone else. “Good old Sarah, she can cope with anything.” I have discovered, though, that I am weak. It turns out that I don’t just want to tend and nurture the needs of others. I have feelings too—

and failings. I love. I hate. I feel anger. And what I feel frightens me. It might stop me from doing what I have to do.

The sun has almost gone now. Night begins to spread over the moors. Out there, in the land that I love, Evie is lost. She has been taken by the enemy and is a prisoner in the stil and secret earth. Only I can save her. It is my turn to act.

What shal I do?

There are no answers. The day is over. I have to choose. I begin to walk down the hil , under the dark sky, and into the val ey that is cal ed Death.

I hadn’t been expecting this. In al the chaos and uncertainty of the last few months I had learned to accept many strange things, and I guess I had thought that nothing would ever surprise me again.

But this was something else.

I’d heard of her, of course. Everyone’s heard of Velvet Romaine. The lurid details of her first sixteen years have been splashed across every tabloid newspaper. It’s just that I didn’t expect her to turn up at Wyldcliffe Abbey School for Young Ladies. Wyldcliffe isn’t the kind of school that attracts the daughters of rock stars. The daughters of duchesses, maybe, but not a flashy wild-child rebel like Velvet. But there she was, when I arrived at the school on the first day of the summer term, and she was making a sensation. Her huge limo had pul ed up outside the school’s imposing Gothic building, and as she stepped out she was surrounded by a crowd of excited students and a gaggle of paparazzi. The photographers snapped away eagerly and Velvet stood there lapping up the attention, dressed as though she was ready for a hot date in some sleazy nightclub.

But I don’t want to sound judgmental. Hey, this is me, Sarah Fitzalan, the earth mother type, got a kind word for everyone, always looking for the positive, always ready to defend the underdog. That’s what they say, anyway.

I had been so desperate to get back to school. Not that I’m some academic genius or anything. It wasn’t my studies that were pul ing me back to the remote val ey where Wyldcliffe lies hidden. It wasn’t the spel of the wild moors either, where the gorse and cowslips would be in bloom. The awakening earth cal ed to me, but I turned my face from the hil s and thought of nothing but seeing Evie and Helen again.

You know how people say about their friends, oh, we’re so close we could be sisters? Wel , Evie and Helen and I real y are sisters. Not related by blood, but by deeper ties.

Mystic, elemental forces bind us together, in this life and the next. Sounds stupid, but I’ve always believed there are things in life that we don’t understand, that maybe we can’t see, but they exist al the same. The feel of a place, an atmosphere, premonitions, and prophecies—I think al that means something. I believe that the soul is eternal and that the spirits of the dead can speak to us. And so when Evie first arrived at Wyldcliffe as a lonely scholarship student and started seeing visions of a girl from the past, I didn’t cal her crazy. I believed her. I accepted what was going on, and everything that fol owed.

How the girl was Lady Agnes Templeton, Evie’s distant ancestor. How, more than a hundred years ago, Agnes had discovered the secrets of the Mystic Way and had become a servant of the sacred fire. How Agnes’s former admirer, Sebastian Fairfax, was the same person as the mysterious young man that Evie was secretly seeing. How Sebastian had become trapped in a futile quest for immortality. How we had discovered our own elemental powers—water for Evie, air for Helen, earth for me—and used them to save Sebastian’s soul. And how, final y, Sebastian had passed from this life and left Evie grieving for an impossible love.

Al things considered, we had a lot to talk about. We had faced death together. Evie had lost her first love and Helen had lost her mother, and I had been desperately sad for them both. As usual I had put al my energy into trying to understand and sympathize with and care for my friends, but to tel the truth, when I’d said good-bye to them at the end of term and gone home for the holidays, I had felt lost and uprooted without them. It was as if I didn’t exist without Evie and Helen and their problems, as though I were just wandering about on the edge of the story of my life. Sarah the kind one, the supportive one—but if there was no one to support, what was I supposed to do?

And then the dreams had started.

It was the same thing, night after night. I was in an underground cave. Torches were burning in the shadows.

Someone was near me. His eyes met mine. It was someone who knew me, right the way through. Someone I had no secrets from. Someone who loved me. Not for being good or strong, but just for being me, al of me, good and bad. I reached up to kiss him, my heart and lips yearning. And then I was chil ed by an indescribable feeling of horror. The face turned into a wizened mask.

Perhaps it was simply a reaction to everything I had been through with Evie and Helen, but I believed it was an omen, a sign of more danger to come. Whatever the truth of it, dreams and darkness were pul ing me back to Wyldcliffe, and I was longing to see my friends. So I real y wasn’t too pleased when the circus surrounding Velvet Romaine seemed to be bringing the whole place to a grinding halt.

There she was, posing next to her over-the-top car as the photographers screamed, “Velvet! This way! Give us a smile!” She wasn’t smiling, though. She looked furious.

Her hair was jet-black, cut into a Louise Brooks–style bob, and she exuded the same kind of dangerous sexiness as the classic screen star. Her short skirt showed off slim legs, torn fishnet stockings, and expensive-looking black lace-up boots. Al the other Wyldcliffe girls, who were staring with disbelief, were wearing the old-fashioned red and gray school uniform. I wondered what Velvet would look like when the Wyldcliffe teachers, or mistresses, made her get rid of her designer clothes and her heavy eyeliner and goth lipstick. But right now she was making the most of her grand entrance as she pouted for the photographers, sultry and rebel ious. Whatever Wyldcliffe’s past secrets were, it had never seen anything like this before. As I watched Velvet, she reminded me of a cornered animal putting up a defiant last stand, ready to lash out at anything and anyone who got in her way.

“Is that real y her?” a girl from my class, Camil a Wil oughby-Stuart, whispered excitedly at my side. “Velvet Romaine?”

“What is she doing here? Doesn’t she live in L.A. or somewhere like that? She’l be bored to death at Wyldcliffe. I mean, she goes to these amazing parties with actors and musicians and rock stars. I’ve read about her in al the magazines. Didn’t she go to rehab when she was only thirteen? And last year she ran off with some guy twice her age. . . .”

Other stories about Velvet Romaine flashed into my mind. Despite her money and glamour, she’d already met with tragedy in her short life. I recal ed that she’d been in a car crash where her younger sister had been kil ed, and then there had been some incident about a fire at her last boarding school—I couldn’t quite remember what had happened. I usual y read magazines about horse riding, not celebrity gossip. But Camil a seemed to know al about her.

“Ooh, it must have been awful for Velvet at L’École des Montagnes,” she rattled on. “It’s a fantastic school in the Swiss Alps—al the European royals go there—but her best friend was scarred for life after that fire they had. No wonder she didn’t want to stay there. But why come to Wyldcliffe? It’s far too quiet for someone like Velvet Romaine!”

“Perhaps that’s why her parents want her to come here,”

I said. “You know—order, purpose, discipline, and al the rest. Old-fashioned values.”

Camil a grimaced. “She’s going to hate it. Have you seen her clothes? She looks so amazing. I wish my mom would let me have some boots like that. . . .”

As Camil a chattered away, a woman with a plain face and scraped-back hairstyle opened the school’s massive oak door and came out to stand on the step next to Velvet.

It was Miss Scratton, our history teacher. She addressed the photographers coldly.

“This is private property. If you don’t leave immediately, I shal cal the police. Please respect the fact that this is a school and a place of learning.” She turned to Velvet. “I am Miss Scratton, the new High Mistress of Wyldcliffe. I want to welcome you to the Abbey, but let’s go somewhere more private. Girls, what are you al doing hanging about here with your mouths open like goldfish? Most undignified. I’m sure you al have plenty to do to unpack and settle down before classes start tomorrow.” The gaping students reluctantly moved away, and Miss Scratton beckoned me over. “Sarah, could you please stay a moment?” She smiled faintly. “You are just the person I was looking for. You can help show Velvet around.”

As Close as Sisters by Colleen Faulkner
That Baby by Jillian Dodd
Star Crossed by Rhonda Laurel
The Flood by John Creasey
Stag's Leap by Sharon Olds
Revenge by Rayna Bishop
robert Charrette - Arthur 02 - A King Beneath the Mountain by Robert N. Charrette
The Dalai Lama's Cat and the Art of Purring by David Michie
Terror in the Balkans by Ben Shepherd
Outlier: Rebellion by Daryl Banner