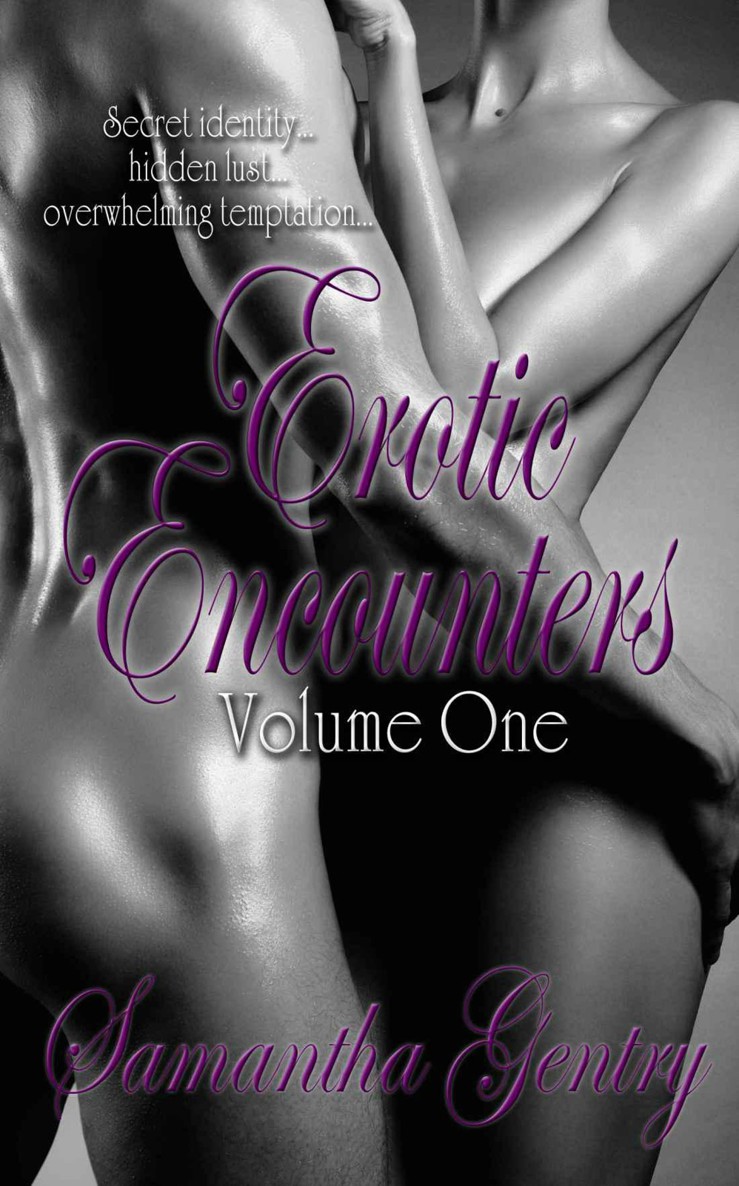 Thank you for purchasing this Wild Rose Press, Inc. publication.

"Ms. Gentry has believable characters that are well written. She tells a visual tale with words."

"I found Masked Encounter a lovely and steamy way to spend a couple of hours. This is another story that will be placed prominently in my short story library."

"Samantha Gentry is an awesome writer who spins a tale of so much interest you have to fall in love with the characters and the book itself! Trust me on this! You will enjoy Ms. Gentry's style. I guarantee it…read this book!"

Dane Wingate scrutinized Shasta Brooks’ short auburn hair, beautiful green eyes and a body even her tailored slacks and blazer couldn’t hide. She handled the business transaction for the obviously confused elderly woman with a patience and compassion that touched the vulnerability he tried to keep safely tucked away. Life had taught him that such a liability was one to keep hidden, not an asset to let anyone else see.

He sucked in a deep breath, held it for a moment, then slowly exhaled. No matter how attracted he was to her, he didn’t have time in his life for any type of personal involvement, not until—

Shasta’s voice jolted him from his thoughts. He flashed his patented sexy smile as he sauntered toward her window, trying his best to appear casual and confident. “Good afternoon, beautiful. How’s my favorite bank teller today?”

She returned his smile with a dazzling one of her own. “I can say in all honesty, I’m glad it’s Friday. The bank will be closing in a few minutes, and I’m not working a Saturday morning shift this week.”

“Sounds like you have big plans for the weekend.” He winked at her as he shoved a check across the counter. “I’d like to cash this.”

She looked at the check. “You know, it would be much quicker for you to use the ATM if the only thing you want is cash from your account.”

“I know, but the ATM is so impersonal. I’m very big on the
personal
touch.” Using the bank’s ATM would certainly have been much quicker, but it wouldn’t have allowed him to hear her sexy voice or see her beautiful smile.

Over the past few months, ever since the bank became one of his clients for his computer consulting services, he had steadily grown in lust with her. It had slowly dawned on him over the last month that perhaps more than just the physical attraction captivated him. How much more and exactly what that
more
consisted of he didn’t know and unfortunately couldn’t allow himself the indulgence of finding out. At least not until he had his life straightened out and could once again do as he pleased.

He leaned forward slightly, inhaling deeply to take in the scent of her perfume. “Is that a new fragrance you’re wearing?”

“Yes. It’s called
Surrender To Passion
.” Her eyes sparkled, and her tone took on a teasing quality. “Do you like it?”

He lowered his voice to a husky whisper. “Sounds like words to live by.” He tilted his head to one side and raised a questioning eyebrow. “Is that the philosophy you follow?”

The heat of embarrassment spread across Shasta’s face, a flush she knew tinged her cheeks a vibrant pink. Without a doubt, the man had the sexiest smile and voice she had ever encountered. And his eyes…they weren’t just blue. They were the most incredible shade of turquoise. She had never seen eyes that color. They fit perfectly with his sandy blond hair, handsomely chiseled features, broad shoulders and athletic build. And when you put it all together, it added up to the most desirable and sexy man she had ever met.

She forced a calm to the surge of sexual tension and heated need that spoke to her whenever she saw him. Spoke to her? What an understatement. It required a concentrated effort to keep from leaping across the counter, ripping off his clothes and indulging the numerous fantasies that flooded her mind whenever she thought about Dane Wingate.

She counted out two hundred dollars, then smiled as he picked up the bills. “Is there anything else I can do for you today, Mr. Wingate?”
Anything…anything at all. And I do mean anything.

“How many times do I need to tell you? It’s Dane. And in answer to your question,” a sly grin tugged at the corners of his mouth, “I’m sure there’s several things you could do for me.” He glanced at his watch. A bit of a scowl wrinkled across his forehead. “Oops, I didn’t realize it was so late. I barely made it here before closing time. I’m definitely behind schedule.”

A hint of disappointment squelched her mounting desires and ongoing hope every time he came into the bank. Would this be the day he asked her out? Perhaps an elegant dinner followed by a very special dessert. “Have a nice weekend, Mr. Wingate…I mean, Dane.”

“You, too, Shasta.” He winked at her again as he pocketed the cash, then headed for the front door. He glanced back and gave her a parting smile before leaving the bank.

But beneath the heated desires that consumed her whenever she saw him buzzed an undercurrent wanting to know the real person behind the sexy grin and smooth voice—the man himself. What type of books did he read? What kind of movies did he like? What type of music did he listen to? Did he have any brothers or sisters? Had he ever been married? She wanted to know everything about him.

The only thing she knew was the information on his account at the bank—thirty-two years old and not currently married. A hint of a frown crossed her forehead. At least she assumed he was single. He didn’t wear a wedding ring, and his was the only signature on the account.

She took a calming breath, glanced at the clock and watched as the branch manager locked the door, signaling the close of business. She hurried to balance her cash drawer, then drove straight home.

After retrieving her mail from the front porch mailbox, she sorted through the envelopes as she walked down the hall to her bedroom. Tomorrow was her thirtieth birthday. On one hand, she looked forward to the party the girls at the bank had planned for tomorrow night. On the other hand, it seemed to her that thirty should be some kind of a milestone signifying some sort of life accomplishment.

She had a good job as head teller at the bank and was in line for promotion to assistant branch manager. But her personal life remained steeped in a daily routine that lacked the type of excitement and spontaneity she longed for. She couldn’t even find an exciting lover to occupy her time with earth shattering hot sex, let alone the loving committed relationship she wanted.

She had been engaged briefly during her senior year of college, more as something she thought she was supposed to do rather than true love. Fortunately, she had discovered in time that her fiancé only wanted someone to bask adoringly in his glory rather than an independent woman with thoughts and an identity of her own. It had turned out to be a disaster she didn’t want to repeat.

After stripping down to just her panties, she pulled on her favorite old worn jeans and a cotton T-shirt. Her best friend, Gillian, was bringing the pizza and a movie while she provided the bottle of wine. Just another quiet night at home. She pursed her lips in a moment of contemplation. There had been too many quiet nights at home lately.

Somewhere in the greater Seattle metropolitan area, there had to be a sexy man who had eyes only for her, a man who would respect her independence and could make a commitment to a lifetime relationship. Someone with a sense of humor. Someone who could carry on an intelligent conversation on a variety of topics. A caring and compassionate man she could give her heart to and know he would treat it with respect and tenderness.

And when the lights were turned down low, a man who could fuck her into a state of blissful exhaustion.

A heavy sigh of resignation escaped into the air. Was she doomed to continue on the present course? The strong career woman who spent lonely nights at home? The doorbell interrupted her moment of reflection.

“Surprise!” A chorus of voices greeted her when she opened the door. Her genuine laughter followed a moment of stunned silence. She stepped aside to admit her female co-workers from the bank, each one carrying a birthday present. Gillian and Trudy had boxes of pizza and several bottles of chilled champagne.

Shasta shook her head as she beamed at her friend. “I can’t believe this, Gillian. You had me completely fooled.”

“That was the plan. The best way to pull off a surprise party is to make you think there’s a party planned for the next night. We’ve got food and drink, although I’m not too sure if pizza and champagne really go together.”

“Champagne goes with everything,” Trudy called from the kitchen as she set the pizza boxes on the counter.

“And we have another surprise for later,” Gillian added.

“Another surprise?” Shasta cocked her head to one side. “What is it?” She couldn’t stop the grin tugging at the corners of her mouth. “Come on, tell me. Don’t leave me in suspense!”

A knowing smile spread across Gillian’s face. “No, no, no. Then it wouldn’t be a surprise. I can only say you’ll definitely love it.”

Gillian opened bottles of champagne and filled glasses while Trudy dished up the pizza. Music filled the house, competing with the voices and laughter for control of the noise level. As the hour grew later, Gillian called for everyone’s attention.

“It’s time for the birthday girl to open her presents.” Shasta sat in the chair indicated by Gillian as the presents were stacked on the table next to her. Giggles and laughter filled the room as she unwrapped one risqué gift after another until each present had been opened and passed around for everyone to see.

A warm sensation flowed through Shasta, a combination of champagne and good fun. “I see the presents have a definite theme. I can honestly say I haven’t seen such an interesting collection of naughtiness anywhere other than a catalogue featuring adult toys and sexy lingerie. Thank you one and all.” She tried unsuccessfully to suppress a grin. “I hope to put all of them to good use.”

Several enticing images flashed through her mind. Dane’s head between her legs as he nibbled at the cinnamon-flavored thong, a vision so real she could almost feel his warm breath on the sensitive skin of her inner thighs. Dane reclining on her bed while she painted his erection with the chocolate body paint, then slowly licked it off. She pictured herself sitting astride his body, his cock buried deep inside her pussy with the nipple rings teasing his lips when she rocked forward. Her breathing quickened to match the throbbing need coursing through her veins.