Enigma: A Far From Home Novel 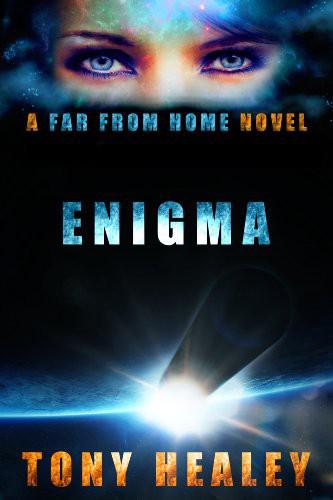 A Far From Home Novel

ENIGMA: A Far From Home Novel

This is a work of fiction. Any similarity to persons living or dead is purely coincidental. No part of this work may be reproduced in any form without the express permission of the author.

The Far From Home Series

Far From Home: The Complete Series

Enigma: A Far From Home Novel

For Danny, with love

when your eyes closed

for the final time

Starbase 6 was a welcome sight as it loomed into view. The
Defiant
slowed from the tremendous speeds of exiting the Jump. As it approached the huge Union space station, Lieutenant Kyle Banks handled the helm controls of the ship with consummate skill.

Feels good to come back here,
Captain Jessica King thought to herself.
Like coming home.

After more than a year away on a mission of exploration, they had returned to Station 6 for some much needed supplies and minor repairs. The
Defiant
had also been promised a few upgrades, and Jessica fully intended on making sure she got them.

The old girl could use them
, she thought.
And the much needed rest…

“Starbase control has made contact, Captain,” Ensign Olivia Rayne reported from the comm. station, her hand to her earpiece.

King nodded. “Patch me through.”

She waited a few seconds for the connection to be made. “Captain Jessica King, Union Starship
Defiant.
”

There was a brief delay, then the voice announced that they were cleared to dock.
“Docking bay three. Please do not exceed standard thruster speed.”

She looked ahead at the large circular space station. Tall centrifuge at the centre, spokes extending out at the middle to form a wide outer ring. Along the ring were enough docking bays to accommodate up to twenty vessels, with many of the bays currently occupied.

Lieutenant Banks brought the
Defiant
– an old but well-kept Archon class battleship – to a relative crawl and lined up the port side with the slowly rotating docking ring. At one time, Archon class vessels had been the backbone of the fleet. Now they were little more than relics. While the Draxx war raged, they still had a purpose. But now, in this newfound era of interstellar peace, the Archons were slowly being taken out of service.

Decommissioned.
Scrapped.
Thankfully, there were no such plans for the
Defiant.

The thought of her being dismantled, ending up as salvage, made Jessica shudder.

“Aligning to dock,” Banks reported, his voice taut with effort as he concentrated on the task at hand. Starbases were not designed to accommodate simple and easy docking manoeuvres.

“Keep her steady, Lieutenant. You know the drill.”

“Aye,” Banks said. His hands flitted over the controls, the
Defiant
edging to the left to butt up against the station. “I could do this with my eyes closed.”

Jessica smiled. “Well, please refrain from doing so on this occasion, Banks. I’d like my ship kept in one piece for the time being. It’d be a shame to crash just before we park.”

“Less than two metres clearance,” Commander Chang reported from the science and tactical station to the Captain’s right. The
Defiant
nestled up to the dock with a slight bump a moment later.

“Good job Mister Banks. Commander Chang, activate all moorings and equalize atmospheres,” King ordered. She got up from the captain’s chair. The
Defiant
was now under the momentum of the station itself, like a very heavy passenger on a merry-go-round. “Power down all non-essential systems. Commander, observe standard protocol.”

“Yes Captain,” Commander Greene said as he relayed her orders to the rest of the ship. Every department would shut down those systems that weren’t needed while the
Defiant
underwent any repairs and refurbishments that had been scheduled for her.

“When the bridge is cleared, come and find me,” Jessica told him.

The Commander nodded. Jessica ran her eyes over her team – Kyle Banks at the helm, Olivia Rayne at the comm. station, Lisa Chang at the science and tactical station, and Del Greene by her side as her second in command – and all she could feel was pride at having the fortune of serving with such a fine group of men and women.

“I’ll be in my quarters,” Jessica said as she left the bridge. “Well done everyone.”

“We can’t have everyone on shore leave at the same time, Del,” Jessica said as she made them both coffee. She handed Greene his cup and sat opposite him. “The repair team will still need crew to assist…”

“I can work that on a rota, Jess,” Greene assured her, both of them comfortable addressing one another using their first names when in private. Captain King had always encouraged the crew of the
Defiant
to relax in her presence. She was there to run a ship, not play dictator.

“I’ll make sure it’s done fairly,” he said. “And that it rotates so everyone gets their share.”

She sipped her coffee. “I don’t know. I worry about them letting their hair down a little too much. You know?”

“Yeah there is
that
,” Commander Greene admitted. Only two months ago they had made a brief stop at Station 37 on the way back home, a short layover of twenty-four hours that had seen her crew engage in half a dozen brawls with another Union ship. It had not only been embarrassing for her, but difficult to find the correct punishment for those involved. “But we dealt with them, didn’t we? Three days scrubbing the deck plating with your own toothbrush will knock the fight out of anyone. They’ve earned it, regardless. It’s been a long tour of duty for us all, Jess. Especially you. I don’t think Station 37 counted as proper downtime.”

“You can’t hide stuff from me,” he told her with a smile. “I’ve been around you too long. You’re tired, stressed. I can see it. If there’s anyone who should be getting some shore leave, it’s the
Defiant
‘s Captain.”

“We’ve had some adventures, sure, and got into a scrape or two,” she said. “But I wouldn’t say it’s been any more stressful than normal. In fact it’s been a good year, give or take a few things.”

She thought back over that past year of exploration. They’d seen some unbelievable sights. The
Defiant
‘s memory banks were literally heaving with precious data. There had been danger, too, but that went hand-in-hand with anything involving a starship… particularly one travelling on its own, charting unexplored territory.

Jessica sighed. “Listen, you remember I told you about that video,” she said.

“Yeah…” Greene said, uncertain. “The one from… you know,
yourself
?”

A year before, prior to casting off on their new mission, Jessica had found a video waiting for her on her personal console. When she played it, it appeared to be from herself. The other version of her proceeded to detail an entire series of events, some of which were beyond her capability to understand. Nor did she need to. They’d apparently happened in another galaxy – and another time.

The other version of herself perished in an incident involving a hijacked Union starship and a Draxx battleship just beforehand. The Draxx vessel, the
Inflictor
, had arrived at Starbase 6. At the same time the base’s alarms were triggered, a small ship called the
Saratoga
had been stolen. Whoever stole it proceeded to take the
Inflictor
on in head-to-head combat. Jessica took the
Defiant
out to give them a hand – whoever had the
Saratoga
obviously intended on defending Starbase 6 from the Draxx. However, after listening to the video left on her console, it was made perfectly clear who had taken the
Saratoga
and saved all their lives… herself. Alt-Jessica had used the
Saratoga
‘s Jump Drive to rip the
Inflictor
apart, ending the short engagement. The realisation that it was herself who’d saved the day… well, it was all enough to make anyone’s head spin.

Among the countless other details, her doppelganger told Jessica she was a victim of Multiple Sclerosis and advised seeking treatment as soon as she was able.

It turned out she was right.

“My condition has been making it difficult for me lately,” Jessica told Commander Greene. Intermittent difficulty walking, numbness in her feet, and sharp back pain had plagued her since receiving the diagnosis. “Despite all Doctor Clayton’s attempts at treating it, nothing’s really been much help. Except . . .”

Greene frowned. “Except what?”

“Clayton’s found an experimental drug that may force it to subside for good,” she said. “He’s having it brought to the station. It should get here any time.”

“Well, that’s great news,” the Commander said. He drank some of his coffee. “Anything’s worth a try, right?”

“Yeah.” Jessica looked away. She couldn’t help the gathering moisture in her eyes, or the way she gripped her coffee cup as she stared off at the stars beyond her viewport.

“I’ve feared losing all this,” she whispered. “Losing this ship. Because my legs don’t work. Or the soles of my feet are growing numb. I’ve wondered how far I’d be willing to go to not have that happen. As it is, Clayton tells me this is more or less untested. There’s no guarantee.”

“The doc knows what he’s doing,” Greene said. “And you should trust him.”

“You’re right,” Jessica said. “It’s just, you like to think you’re invincible. Especially in front of your crew. You want to appear strong and able-bodied.”

“You do already,” Greene assured her. “And you will. It’ll all work out in the end.”

“In some ways I wish that my other self hadn’t left me the video, hadn’t bothered to tell me anything. It’s been a blessing and a curse.”

This happened to be a semi-truth. While the video from her other self had served to plague some of her choices since watching it, the content of the video message itself had been useful information. For instance, warning her against Lieutenant Swogger. Her other self had detailed how the man was suffering some sort of breakdown. Jessica had him removed from the
Defiant
at the earliest opportunity and saved herself a lot of potential grief.

Another was Hal Dolarhyde, a new member of the crew who just so happened to be the legendary star pilot – and hero of the Union, back in the day – Gerard “Hawk” Nowlan. While Jessica’s other self had died, Hawk had survived to render his services to the Union top brass. They’d granted his request to be assigned incognito to the
Defiant
, provided he took a different name and kept his real identity a secret. Only Jessica and Commander Greene knew who he was.