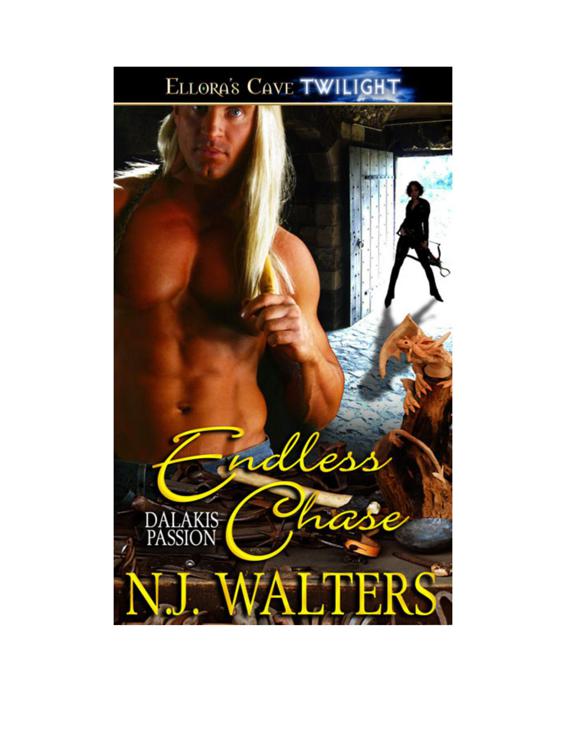 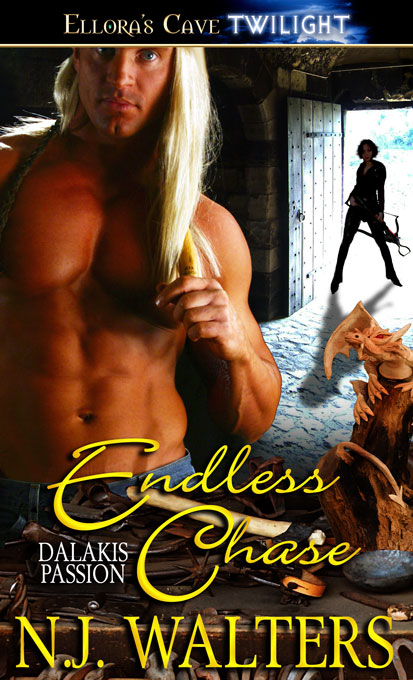 The terms Romantica® and Quickies® are registered trademarks of Ellora’s Cave Publishing.

With the exception of quotes used in reviews, this book may not be reproduced or used in whole or in part by any means existing without written permission from the publisher, Ellora’s Cave Publishing, Inc.® 1056 Home Avenue, Akron OH 44310-3502.

Warning: The unauthorized reproduction or distribution of this copyrighted work is illegal. No part of this book may be scanned, uploaded or distributed via the Internet or any other means, electronic or print, without the publisher’s permission. Criminal copyright infringement, including infringement without monetary gain, is investigated by the FBI and is punishable by up to 5 years in federal prison and a fine of $250,000. (http://www.fbi.gov/ipr/). Please purchase only authorized electronic or print editions and do not participate in or encourage the electronic piracy of copyrighted material. Your support of the author’s rights is appreciated.

This book is a work of fiction and any resemblance to persons, living or dead, or places, events or locales is purely coincidental. The characters are productions of the authors’ imagination and used fictitiously.

This book is for all of you who have come to love the Dalakis family as much as I do, and who asked for Chase’s story.

Thank you for taking this journey with me and for embracing the Dalakis brothers, the women who love them, and their extended family.

She stood in the shadows, feeling more at home there than in the light. As the man she’d searched for these past five weeks poured rich red liquid from the decanter, the scent of blood filled her nostrils. The temptation to kill him now was almost overwhelming, but she restrained herself. Information was what she needed and dead men didn’t talk. But his time was near.

Oblivious to the danger swirling around him, he strolled toward her and thrust a crystal goblet in her direction. “Drink.” Suspicion darkened his eyes as he held up his glass in a silent toast. “It’s too bad you didn’t arrive sooner. You could have shared in the kill.”

It was too bad. That was one more death on her conscience. But what was one more? He was a pawn, nothing more. She suspected they were all just pawns in this game, shuffled and moved by a master player. But she was a willing one. Taking the goblet from his outstretched hand, she raised it to her lips and drank it in one swift swallow, knowing that was what he expected.

His smile sent a shiver down her spine and she knew she was in the presence of pure evil. Laying the empty glass aside, she returned his smile as she shifted closer. “I’ll bet a man of your many talents is privy to all sorts of secrets.”

A name sprang into his mind almost immediately. She heard it as clearly as if he’d said it aloud.
Vasili.
She felt power and fear surrounding it. Who was this person to inspire so much awe and trepidation in a monster such as this? Something deep in her gut told her this was the information she’d been searching for.

Now that his mind was open, she focused her psychic power, grabbing on to his mind with all her might. He froze, his mouth falling open on a silent scream as he tried to fight. “Who is Vasili and where can I find him?”

An hour later, satisfied she’d learned all she could, she walked to the door, the pungent smell of gasoline trailing behind her. There was no sound from the monster she’d just dealt with. For his latest victim, it was too late, but there would be justice.

Stopping, she foraged in her coat pocket and pulled out a pack of matches she’d picked up at a local bar. Flicking one match against the flint, she watched as it sprang to life, its orange glow illuminating the scene before her.

She lit the entire package from the lone match, watching as the flames soared higher. When she tossed it into the room there was a giant
whoosh
as it rushed forward and met with the gasoline. Satisfied there would be nothing left to identify her, she turned her back on the grim scene and walked away.

She knew exactly where she was going next.

Katya Markova blended with the shadow of a large beech tree, the two becoming one, as she stared at the old stone church. Light shone from the few small windows like a beacon of hope, indicating that someone was inside. She’d seen many churches like it in her travels, tucked away in forgotten corners of countries that time seemed to have passed by. No matter their size or their denomination, they all emanated a sense of calm, promising sanctuary to weary travelers. But Katya knew that promise was nothing more than an illusion. She would find no peace here.

She was still, unmoving, as she scanned the area carefully, her black clothing allowing her to become one with the night. When she was certain it was safe, she crossed the grass- and weed-filled yard and climbed the stairs. Her combat boots made no sound against the stone as she climbed to the top and eased the door open. The hinges creaked slightly, but Katya ignored the sound and slipped inside.

The vestibule was dark, but there was light beyond. She stopped by the font of holy water, dipped her fingers into the basin and brought them to her forehead. The smell of incense tickled her nose as she stepped farther into the church. The scent reminded her of childhood and sent a pang of longing through her.

Her mama had loved old churches and her papa had indulged her mama as much as possible. As a result, Katya had spent many evenings such as this, sheltered in the confines of a holy edifice. Large and grand, small and humble, it hadn’t mattered to her mama, she’d loved them all—the architecture and the ambiance.

Mama had once told her that all churches had a soul. Now that she was older, she understood what her mother meant. If you stopped and listened, you could almost hear the heartbeat of the building itself, brought to life from years of devout worship by the faithful. In many older buildings that beat was getting slower and slower, but still, they survived.

An elderly priest was saying evening Mass to about a half-dozen souls, none of them under the age of sixty, but he didn’t even glance her way. Which was a good thing, considering she was carrying a knapsack and a crossbow strapped to her back.

Walking neither slow, nor fast, so as not to draw attention, Katya kept to the flickering shadows as she made her way to the side of the building, stopping in front of a statue of the Blessed Virgin Mary. A ring of votive candles sat beneath the statue, some flickering with life, some burned out and dark.

In most modern churches, there were elaborate candleholders of iron or silver to house these prayer candles. Here there were simple stone ledges that had probably existed since the church had been built. Looking around, Katya estimated the church was at least four or five hundred years old, if not older.

Picking up a votive candle, she fingered it. The wax was smooth beneath her fingertips. They were partially made of beeswax, which was unusual. Most churches nowadays used the cheaper, wax candles, reserving the more expensive and finer ones for the altar. The smell of the beeswax reminded her of her mama. There had always been flowers and candles scattered around the house when she was growing up. It was a fragrance she associated with childhood and innocence.

She sighed, knowing what she was going to do. She couldn’t stop herself, even though none of her prayers had ever been answered.

Tucking the candle into the corner on the top ledge, she plucked a long taper from its holder, using the flame to light her candle. The flame flickered, caught the wick and flared to life. She returned the taper and stared at her candle. The light danced against the stone, pushing back the darkness in this small corner of the stone ledge. Closing her eyes, she briefly offered a prayer for the souls of her parents.

Her eyes flew open as images of their brutal death filled her brain. Her breathing came quicker as her heart began to pound. Katya took a deep breath, forcing herself to calm down. She needed to be in control, had to be in control if she ever hoped to find the monster responsible for their deaths.

Digging into her pocket, she pulled out some euros and dropped them in the small wooden donation box that rested discreetly beside the candles. She didn’t have any of the local currency, but she didn’t think they’d mind. After all, money was money.

Although she knew the candle made no difference, it gave her a momentary sense of peace. That was the best she hoped for these days. A different sort of emotion was driving her, pushing her day and night, and had for almost a year now.

It was a hard, cold bedfellow, but it kept her focused and steady. She would find the person responsible for the brutal slaying of her parents, or she would die trying. It had taken her months to uncover the secretive network of evil and infiltrate it. She’d slowly worked her way into their trust, one dark deed at a time.

But she’d done it in her own way, ridding the world of demons in the guise of men.

They wouldn’t know what she’d done until it was too late. She was so close she could almost see the end in sight. There was only one more thing she needed—her parents’

killer. And that meeting was coming soon. Very soon.

Her new path in life had already taken her down some dark roads, eating away at the person she’d been. Life was not something she took for granted. It was a gift to be cherished and celebrated.

But she had taken it this past year, ripping it from those who preyed on the innocent. She was judge, jury, executioner and death. Each step into darkness took a piece of her soul, but it was a price worth paying. The world was a little safer and she was one step closer to success.

Whirling away from the warm glow of candles, she eased into a pew near the back that was shrouded in darkness. The oak was smooth as she slid onto the seat and leaned 7

forward, resting her hand on the back of the pew in front of her. How many people had sat in this very spot? Their prayers had been raised to the heavens, but had they been answered? She suspected her prayers were very different. Katya prayed for the strength to continue down her dark path until she completed the task she’d set for herself.

What would her parents think of her quest for vengeance?

Her mama would be worried about her and would no doubt be slightly disappointed. Okay, more than slightly. Katya’s stomach roiled, but she ignored it.

Marya Markova was the type of woman who’d never met a stranger. She hadn’t had a mean bone in her body, constantly laughing and bringing joy to all those around her.

One Penny Surprise (Saved By Desire 1) by Rebecca King
Angel Baby by Leslie Kelly
Trail of Blood by S. J. Rozan
Journey's End (Gilded Promises) by Renee Ryan
Fair Is the Rose by Liz Curtis Higgs
Winners by Allyson Young
How to Outswim a Shark Without a Snorkel by Jess Keating
Kiss at Your Own Risk by Stephanie Rowe
Just a Couple of Days by Tony Vigorito
Bizarre Life of Sydney Sedrick by Mandi Casey