Read Emily and the Lost City of Urgup Online

Emily and the Lost City of Urgup 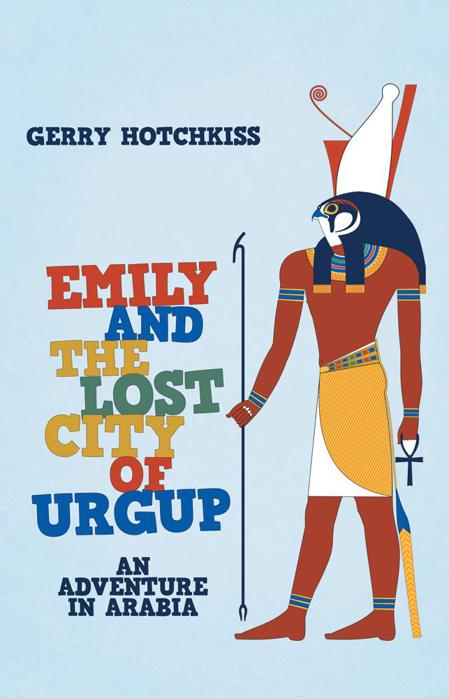 EMILY
and the
Lo Lost City of Urgup

An Adventure in Arabia

EMILY and the Lo Lost City of Urgup

An Adventure in Arabia

All rights reserved. No part of this book may be used or reproduced by any means, graphic, electronic, or mechanical, including photocopying, recording, taping or by any information storage retrieval system without the written permission of the publisher except in the case of brief quotations embodied in critical articles and reviews.

This is a work of fiction. All of the characters, names, incidents, organizations, and dialogue in this novel are either the products of the author’s imagination or are used fictitiously.

iUniverse books may be ordered through booksellers or by contacting:

Because of the dynamic nature of the Internet, any Web addresses or links contained in this book may have changed since publication and may no longer be valid. The views expressed in this work are solely those of the author and do not necessarily reflect the views of the publisher, and the publisher hereby disclaims any responsibility for them.

Any people depicted in stock imagery provided by Thinkstock are models, and such images are being used for illustrative purposes only.

Chapter One:
To Be Made A Fool Of

Chapter Four:
The Colour Of Kidnappers

Chapter Five:
The Reign Of Hotemhotem

Chapter Eight:
No Honor Among Thieves

Chapter Nine:
A Lesson In History

Chapter Twelve:
We Have A Plan

Chapter One:
A Chinese Dinner It Will Be

Archaeology is the study of ancient cultures. In South and Central America there were the Mayans, the Oltecs, the Toltecs and the Aztecs. In the United States, there was a great city few have ever heard about. Cahokia, a mound city with outlying villages on the East side of the Mississippi near St. Louis. At one time, more than 20,000 people lived there when London, England had but 10,000 inhabitants. The mighty Mississippi’s banks overflowed in the hundreds of years before Western Man arrived and its people dispersed to higher ground leaving most of its story buried or lost.

The early Egyptian civilizations were the prize of archaeology with their Great Pyramids and nearby, The Sphinx. Even today, new sites are being uncovered beneath the sands of time.

This story takes place in the early 1920’s when American archaeologists joined in on the hunt in The Middle East to discover civilizations written about in ancient papyrus but never located.

CHAPTER ONE:
To Be Made A Fool Of

EMILY DARROW LIVED
in a small New England town. It had a college where her father was a Professor of English and her mother was the town’s librarian. So it was not a surprise that her house was full of books. Books were found in virtually every room of the house, even the bathroom. Where there were no books there were newspapers and magazines.

“Mom,” Emily said to her mother, “do you know what my friends call our house? “Emily’s bookends’, because we have wall to wall books.”

“Well, it’s better than being called the house of the do-nothings,” her mother replied. School had just ended for the summer and her mother was preparing dinner. “Would you add another chair to the dining room table, Dad’s invited some old Professor to dinner.” “A roommate of your grandfather’s when he was at college,” she went on. “By the way, take off those scruffy blue shorts and purple shirt and put on your Liberty Lawn dress with the white collar, it goes so well with your blue eyes and hair. Emily’s father called it “dirty brown”, which she hated. Her hair wasn’t dirty, just a mixture of blonde and brunette colors. Emily had on her dreamy look, as though she were gazing off at some far distance, as she climbed the stairs to her bedroom. Her mother would say, “Emily’s in another world.” She changed clothes. Her dress came down four inches from the floor and showed off her new white sandals, shoes that were both comfortable and practical. She was the second tallest girl in her classroom and still growing.

“With school out, what shall I do this summer?” Emily mused. New England summers always started out well, but by August the hot sun and the long days never ended. By then, she couldn’t wait to get back to school and see all of her friends.

“Well hello, my favorite girl, why the pensive look?” asked her father as he walked into the house. “I was just thinking about what to do this summer,” she answered, giving her father a big hug and squeeze until he pretended to be out of breath.

“If your mother agrees, I may have a great surprise in store for you this summer,” her father told her, “but it will have to wait until Witherspoon arrives.” “Witherspoon?” she asked. “He is a very special man, you might even say a very great man and you will meet him soon,” her father relied.

Emily wanted to know the secret her father wouldn’t mention but she bit her tongue and helped her mother set the table for five people. Her mother and father, her baby brother, Seth, and the very important person, Mr. Witherspoon.

When he arrived, he certainly didn’t look important, If the truth were known, he looked sort of seedy. He took off an old crumpled hat and his white hair sat on the top of his head going this way and that way. He was skinny so the collar of his shirt sagged away from his neck and he had a small mustache that covered his upper lip and below that not much of a chin at all. His tweed coat hung loosely and his arms hung well beneath the cuffs of the coat. His shoes needed polishing unlike Emily’s father who kept them as shiny as when he was a marine in the Great War.

A small pair of glasses covered most of Mr. Witherspoon’s eyes, but when he looked straight at Emily, the smile on his face, the twinkle in his eyes, the energy that seemed to explode from his trim frame captured Emily by surprise. She seemed overwhelmed. He seemed full of joy!

“You must be the Emily I have heard so much about from your granddad,” he noted. “I am Professor Ernest G. Witherspoon, your most humble servant.” What could Emily say after such a strange introduction. She put out her hand which was clasped into what Emily felt was a very strong grip, indeed. So she squeezed back as hard as she could. The professor laughed.

Before dessert, when coffee was being served, Emily’s dad got up, went into the den and returned with a sheaf of papers. “Sarah, please come and sit down,” he said to her mother. “Professor Witherspoon has something special to propose to us.”

“Ernest, please, Ernest,” said the professor. Then he went on, “as you know, I am an archaeologist, having spent my lifetime studying ancient civilizations. Early this year I received an invitation from a colleague of mine in Egypt to come to Arabia and look for what we believe to be important lost cities. I plan to be there from the middle of June until August 15th, two months. And I would like to take Emily along with me.”

“Emily?” queried her mother. “A twelve year old is to go away, across half the world, with an almost sixty year old man I have never met before, for two whole months.” “Is this some sort of joke?” she went on.

Emily’s father had heard how abrupt Professor Witherspoon was known to be, but he hadn’t expected him to offer quite that simple an explanation. “Sarah,” he said, “let me elaborate, if I may.” “This idea isn’t some sort of last minute concoction. Ernest and my dad and I have talked about it for months. The Middle East is the beginning of our civilization, our culture, our art, and our writing. You know how Emily is always being teased by her friends about the books and magazines and newspapers that clutter this house. Here is a golden opportunity for her to see how it all started. The very roots of our love of literature.”

He had reached the core of Emily’s mother’s heart and soul.

“Put yourself at Emily’s age. Wouldn’t you have died for such an opportunity?” he added.

He had angled out the perfect fly for Sarah. Now he had to wait and see if she would take it and then be very careful pulling her into his net. “Okay, let’s talk about it,” she said.

Emily was confused. She had always been told not to go out with any stranger and Professor Witherspoon was certainly a stranger to her. The trip to Arabia sounded so exciting. What could she do?

She remembered the stories of knights from foreign lands who wanted to marry a king’s daughter. The knights had to perform all sorts of tests to win her hand. She decided that if the Professor wanted to take her on the trip, he would have to pass four tests. Skipping rope, jacks, hop scotch and, she thought for a minute, a brain test, ‘I packed my grandmother’s trunk’.

She proposed the tests to Professor Witherspoon. He looked at her with a bemused and quizzical face. “You will discover, Emily, that I am not the most coordinated person you may have the pleasure of knowing. But I shall try my best.”

She went to her bedroom and in the closet underneath shoes and books and clothes she hadn’t put away properly she found a jumping rope and a set of jacks. They went out side. “The first test,” announced Emily, “will be the Jumping Rope Test.” “Watch me.” She jumped ‘one, two’ on both feet and then “three, four’ on first her right and then her left foot. Professor Witherspoon tried but the rope was too short and it hit the back of his neck.

“Jacks, will be the second test,” Emily decided. She rolled the jacks in a tight grouping on the sidewalk by her house. She tossed the small red ball up in the air, picked up one jack and caught the ball. Then she gave it to the professor. He tossed the ball so high it bounced off the limb of a maple tree overhead and landed in the gutter of her house, rolled down a gutter pipe and into the prickly bushes. By the time they found some work gloves in the garage to use to get the ball out of the prickers, Emily decided to move on to test three, Hop Scotch.