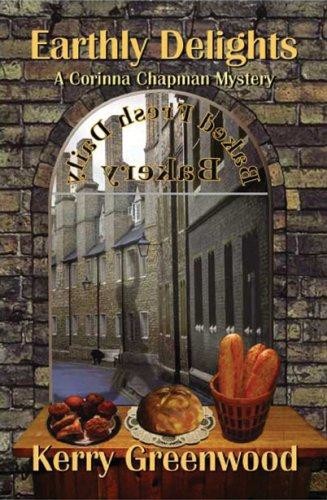 K
ERRY
G
REENWOOD
is the author of nineteen novels and the editor of two collections. She is the author of the Phryne Fisher mysteries, as well as several books for young adults and the Delphic Women series.

When she is not writing she is an advocate in Magistrates’ Courts for the Legal Aid Commission. She is not married, has no children and lives with a registered Wizard.

The author and publishers thank The Society of Authors as the Literary Representative of the Estate of Alfred Noyes for permission to reproduce an extract from ‘The Highwayman’ on p. 104.

All rights reserved. No part of this book may be reproduced or transmitted in any form or by any means, electronic or mechanical, including photocopying, recording or by any information storage and retrieval system, without prior permission in writing from the publisher. The
Australian Copyright Act 1968
(the Act) allows a maximum of one chapter or 10% of this book, whichever is the greater, to be photocopied by any educational institution for its educational purposes provided that the educational institution (or body that administers it) has given a remuneration notice to Copyright Agency Limited (CAL) under the Act.

1. Bakers and bakeries—Fiction. I. Title.

This book is for the remarkable Sarah-Jane Reeh.

In loving memory of Sister Connie Peck FM, who even now is giving God a hard time about his negligent care of the widow and the fatherless.

This book is a work of fiction. No character in this book is meant to represent a real person. The City of Melbourne is also an artefact of my imagination.

Four am. Who invented four am?

I dragged myself out of bed, slapped at the alarm, thrust bare feet into slipper-wards, stood on what felt like a furry rope and was rewarded with a yowl.

Oh shit. Horatio was waiting politely at my bedside to deliver his morning greeting and I had just begun the day with a bad deed. Meroe would frown at the effect on my karma.

Of course, if Horatio didn’t insist on sitting in my slippers it might cut down the number of times this happened, and the consequent karmic debt. I’ll probably come back as a mouse, and that would be on my good days.

It did. While Horatio was giving the milk his reverent, devoted attention, I had time to flick on the heater, put on the
coffee (without which no baker ever commences the day), survey the squalor of my small stone-flagged kitchen, shiver a bit and drag on some clothes. I tend to dress in the kitchen because there is no heating in my bedroom until the ovens come on automatically at four. I had heard the fans cut in as I shut off the alarm clock.

Not a pretty sight on a cold dark morning, a baker. Long mousy hair tied back ruthlessly. Face entirely devoid of makeup, eyes dark-ringed as a result of waking when all others are sleeping. Thin faces look skeletal at this hour, fat faces like an illustration in a textbook on forensic pathology under the heading ‘adipocere’. I’m fat, so it’s the adipocere for me. I grin at my reflection, finish washing my face, put on two layers of tracksuit, and toast some gourmet date and walnut bread for breakfast.

Not bad at all. Possibly a little undersweetened. I made a note to add more honey next time I baked it.

I got into baking because I wanted to become an accountant. Bear with me—it makes sense. I was looking for a job which allowed me to attend all my lectures and the local Italian bakers gave me a job as a general hand, hours from four am to nine am, which got me to my economics lecture almost on time, though a little floury.

As the years went on numbers became drier and baking more fascinating. It’s almost an alchemical process. You combine flour, water and the plant yeast and at the end of the process you get something shiny, crunchy, aerated and delicious.

Four in the morning is a time when the mind has a tendency to run loose. Where was I? Ah, yes. I can pin down the moment when it happened. I was in the middle of a meeting about a takeover and the CEO was talking about currency fluctuations, I should have been fascinated, but all of a sudden
there was a click in my mind. I didn’t care. There was our client with more troubles than the Jam Tin (aka the Telstra Dome) on a bad grass day and I didn’t care. Bastard had too much money anyway.

You can’t be an accountant—no, you can’t stay an accountant—with that sort of attitude. I left a note about cashing in my superannuation payments on my boss’s desk, went home, levered off my uncomfortable shoes, tore off my bloody ridiculous suit with the padded shoulders, dragged on a tracksuit and vowed that whatever I had to do to make a living for me and Horatio, it would never involve wearing a kitten heel again. I joined the bakery full time, completing my apprenticeship. When I left Pagliacci’s, Papa Toni gave me a lump of his own pasta douro dough.

It was still with me, growing happily in its bucket, fed with sugar and kept at the optimum temperature. Yeast must be nurtured. Mama Pagliacci used to talk to her yeasts. Before Horatio arrived, so did I. Now I talk to him and I hope the yeast doesn’t feel slighted.

I set up this bakery, Earthly Delights (anyone heard of Hieronymus Bosch? Look at the picture on the wall next to the glass case. It can keep a queue amused for, oh, minutes), in Calico Alley in the middle of the city. I like cities. Even at four am something is always stirring, though around here it is likely to be up to no good. We have a lot of junkies at this end of the city. They are the reason why my bakery has extremely expensive triple locks, bolts and stainless steel security doors. I can’t afford the health risk if they break in. I’d lose a whole batch of bread if someone dropped a syringe in my mixing tub.

Yesterday’s mail caught my eye, piled on the table. Mostly bills addressed to Corinna Chapman, baker. One was a strange religious tract which appeared to be accusing me of being the
Scarlet Woman. Done on a computer—any madman can make a respectable looking tract in these IT days. ‘The Wages of Sin Is Death’ it proclaimed. Weird.

Horatio, one paw politely on my knee, was intimating that breakfast might be acceptable. I shelved the tract for later consideration. Cities breed madmen. I shook some of the dried kitty food—why do they mould it into little shapes, like fish and hearts? It can’t be to amuse the cat. Horatio would eat alphabet cat food that spelled POISON as long as he felt peckish. And he’d eat it out of anything. There is no need for a special bowl with CAT on the side. Who else is going to eat amusingly shaped fish-flavoured biscuits with added vitamins and minerals out of a dish on the floor? Since I’ve grown up, I haven’t any friends who would do that.

I had bread to make. I took my second cup of coffee with me down the stone stairs to the bakery. I could feel the hot air rising. Horatio would join me when he had finished breakfast. He is a gentlemanly cat and considers it impolite to hurry his food. Besides, he needs to remove every crumb from his whiskers before he steps down to meet the Mouse Police, a rough but pleasant pair, far removed from him in elegance.

Horatio is an aristocat. I occasionally feel that I am unable to meet his stringent requirements for suitable conduct in a Lady.

I walked down into the bakery and the lights flicked on, blinding me momentarily. The Mouse Police collided solidly with my ankles in their eagerness to demonstrate that they had been working hard all night and deserved extra servings of Kitty Dins.

As I counted corpses—seven mice and (erk!) eight rats, one almost as big as a kitten—I congratulated them on their excellent patrolling and laid out the food in their bowls.

Allow me to introduce them. Rodent Control Officer Heckle, on the right, a black and white ex-tom of battered appearance, a little light on as to ears and with a curious kink in his tail. A notorious street fighter in his prime, now retired. And on the left, Rodent Control Officer Jekyll, a strong young black and white ex-female who had her litter under the mixing tub and now has no further interest in matrimony. She delivered the best right jab I had ever seen to Heckle when he swaggered too close to her kittens, and thereafter they have a relationship based less on mutual respect than on a balance of terror. I have, however, observed Heckle allowing Jekyll to lick his ears, and I once caught Heckle grooming Jekyll. When they saw me watching they both looked embarrassed. As far as I’m concerned it’s meant to be old diggers together.

I got on with the mixing of the first batch of the day to the pleasant crunching of Kitty Dins and appreciative whuffling. Rye flour, sugar, sourdough yeast, water, a measure of white to make it a little lighter, on with the dough hooks and switch on the machine. My rye bread yeast is derived from a certain wild yeast, which is sour. I can sell all the rye bread I make to Eastern European restaurants.

I’ve got an order for Health Loaf, guaranteed free of fat. I haven’t told the buyer that unless it’s a special or sweet bread there isn’t any fat in bread. I don’t believe that the Trade Practices Act obliges me to do so. Health Loaf is also free of gluten, which means that I need to use baking powder to get it to rise. Gluten is essential in making bread and provides much of the nutritional value as well as the taste. But there it is. The customer, as some capitalist observed, is always right. It’s a reasonable deal, I suppose. They get something better than the average sawdust, and I get paid. There’s really no satisfaction in making Health Loaf. Without binding elements
it’s crumbly and without salt, sugar or spices it’s flavourless. I think the eaters would get as much kick out of a handful of unprocessed bran and it would be cheaper too.